Transforming growth factor beta (TGF-β) is a multifunctional protein that induces gene expression of cartilage-specific molecules, but its exact role in the process of chondrogenesis is unclear. Because recent studies suggest that TGF-β can facilitate chondrogenic precursor cells differentiating into chondrocytes, we sought to determine whether TGF-β prevents denervation-induced reduction of endochondral bone formation in an experimental model. Mice were treated daily with recombinant human TGF-β1 (rhTGF-β1) for 3 weeks. We found that rhTGF-β1 not only prevented denervation-induced reduction of gene expression of type II collagen, type X collagen, aggrecan, Indian hedgehog, and parathyroid hormone-related peptide, but also synergized endochondral differentiation. These results demonstrate that short-term systemic administration of TGF-β substantially prevents denervation-induced reduction of endochondral bone formation via stimulating endochondral differentiation. Potential therapeutic applications will be pursued in further studies that address the molecular biological mechanism of TGF-β on endochodral bone formation after denervation in animal models.

Denervation is associated with reduced skeletal bone formation in patients and experimental models [1, 2], resulting in low bone density, diminished linear growth velocity (possibly long-term) and an increased risk of fractures, osteoporosis and reduced peak bone mass. Recent studies have shown that members of the transforming growth factor-β (TGF-β)/activin/bone morphogenetic protein (BMP) cytokine family play an important role in stimulation of bone formation [3-5]. Most members of the TGF-β superfamily are expressed in cartilage tissue [6-8] and may affect skeletal histogenesis of cartilage formation and growth. TGF-β promotes chondrogenesis in cultures of early undifferentiated mesenchymal cells in vitro [9, 10] and stimulates chondrogenic differentiation in vivo [11-13]. TGF-β also stimulates collagen synthesis [14, 15] and chemotaxis of osteoblast-like cells [16, 17] and promotes soft tissue wound healing after denervation in vivo [18]. TGF-β is expressed at all stages during fracture repair, and exogenous TGF-β has dramatic effects on gene expression and differentiation of cartilage and bone cells during bone repair [19]. These findings illustrate that TGF-β can regulate mesenchymal cell and chondrocyte function, but the mechanism is unclear.

All mice were treated by subcutaneous injection with either vehicle or rhTGF-β1 100 μg/kg daily 2 hrs before operation. Mice were given intraperitoneal (IP) injections of 2.5 mg/kg calcein on day 2 and 25 mg/kg tetracycline-HCl (Achromycin) on day 8. Mice were weighed and then killed quickly by cervical dislocation after deep anesthesia induction with methoxyflurane. Rib cartilage, articular cartilage and intervertebral disc were isolated from each animal and pooled respectively for total RNA or culture.

Unless indicated otherwise, all chemicals were purchased from Sigma Chemical Co. (St. Louis, MO). All mice were cared for in accordance with the National Research Council's Guide for the Care and Use of Laboratory Animals. The experiments were conducted at University of Chicago, laboratory animal facility, in barrier housing within AAALAC-accredited animal quarters under protocols reviewed and approved by the Institutional Animal Care and Use Committee.

RhTGF-β1 was purchased from Sigma and bioactivity of samples was confirmed using the mink lung inhibition assay [28]. Samples were in 0.1% mouse serum albumin (MSA), 0.04 M sodium citrate buffer at pH 6.2.

Chondrocytes were isolated from mouse rib cartilages as described previously [29]. Briefly, cartilaginous rib cages were pre-incubated in 3 mg/ml collagenase (Sigma) in DMEM (Gibco/Invitrogen, Carlsbad, CA) for 45 min at 37ºC and rinsed with PBS. They were further incubated in 3 mg/ml collagenase in DMEM at 37ºC for 5 hrs, with undigested parts discarded. Chondrocytes were collected and rinsed with medium twice before seeding at 1.0 x 105 cells/cm2 in tissue culture plates. The cells were grown in DMEM supplemented with antibiotics (100 U/ml penicillin G sodium, 0.25 μg/ml amphotericin B, and 100 μg/ml streptomycin sulfate) and 10% FBS (Gibco/Invitrogen).

Total RNA was prepared from mouse cartilages by the single-step method as described previously [30,31]. RNA was suspended in RNase/DNase-free water (Gibco/Invitrogen) and quantified with an Agilent 2100 Bioanalyzer using the RNA 6000 Nano Assay (Agilent Technologies, Palo Alto, CA). First-strand cDNA synthesis was performed using the SuperScript first-stand synthesis system for real-time PCR (Life Technologies, Rockville, MD) with oligo (dT) as the primer according to manufacturer's protocol. As an additional quality control, GAPDH mRNA primers were added to each RNA sample prior to cDNA synthesis. Oligonucleotide primers and Taqman probes were obtained from Applied Biosystems. Real-time PCR was performed in a Smart Cycler (Cepheid, Sunnyvale, CA). Measurements were taken at the end of the 72ºC extension step in each cycle, and the second-derivative method was used to calculate the threshold cycle. Melt curve analysis showed a single sharp peak for all samples. Real-time PCR was also performed with primers specific for GAPDH. Data were normalized to GAPDH mRNA.

The chondrocytes were labeled with 2 μCi/ml of [35S]-sulfate for 6 hrs after treatment with rhTGF-β1 (1 ng/ml) for 1 hr and/or dipalmitoylated Ihh (dpIhh) [32] and PTHrP (1-34) (Sigma). Glycosaminoglycan (GAG) synthesis was determined by measuring incorporation of [35S]-sulfate into material precipitated with cetylpyridinium chloride after protease digestion [33]. DNA contents were determined by the fluorometric procedure as described previously [34]. To detect sulfated proteoglycan accumulation, cultures were fixed with 3% acetic acid (adjusted to pH 1.0; using HCl) for 5 minutes and stained with 0.1% Alcian blue in 3% acetic acid (pH 1.0) [35].

Results are given as means ± SEM. Student's t-test or analysis of variance (ANOVA) followed by Schaffer's test was used for statistical analysis as appropriate. 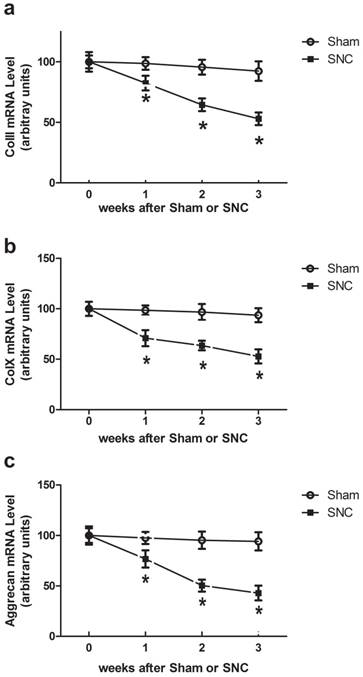 Dose dependent effects of rhTGF-β1 on mRNA levels in intervertebral disc of mice. Data expressed as mean ± SEM (n = 7), * p < 0.05 with different letter among all groups by ANOVA. 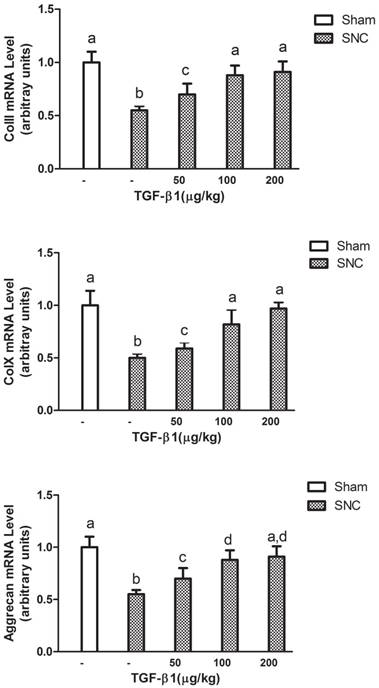 Using murine rib cartilage-derived chondrocytes in primary cultures, we found on day 7 of culture that control cells (without rhTGF-β1 treatment) displayed flattened fibroblastic cell morphology with a nonrefractile contour (likely due to lack of a proteoglycan-rich pericellular matrix). In contrast, cells grown in rhTGF-β1 containing medium displayed a polygonal morphology and a highly refractile contour indicative of abundant pericellular matrix accumulation (data not shown). These cytological traits are characteristic of differentiated chondrocytes in monolayer culture.

In this study, denervation decreased mRNA expression of ColII, ColX and aggrecan in mouse rib cartilage, articular cartilage and intervertebral disc, suggesting that endochondral bone formation is inhibited by denervation. Furthermore, reduced ColII, ColX and aggrecan protein levels in all three cartilage sites (rib, articular, and intervertebral disc) were similar to mRNA levels, indicating that denervation-inhibited endochondral bone formation is not specific for any particular area mouse cartilage, an effect not limited to the sciatic nerve crush area. The mRNA and protein levels of ColII, ColX and aggrecan recovered after treatment with rhTGF-β1, suggesting a therapeutic effect on endochondral bone formation. Stimulated proteoglycan synthesis and a highly refractile contour in primary cultured chondrocyte derived from mouse rib cartilage indicates that rhTGF-β1 enhanced endochondral bone formation may be due to stimulated chondrogenic cell differentiation. Ihh and PTHrP gene expression was also recovered, and rhTGF-β1 had a synergistic effect on chondrogenic cell differentiation, suggesting that chondrogenic cell differentiation stimulated by TGF-β1 may act as a relay signal between Ihh and PTHrP. TGF-β1 was chosen in this study because it expresses the highest level in skeletal tissue among all the isoforms [19]. 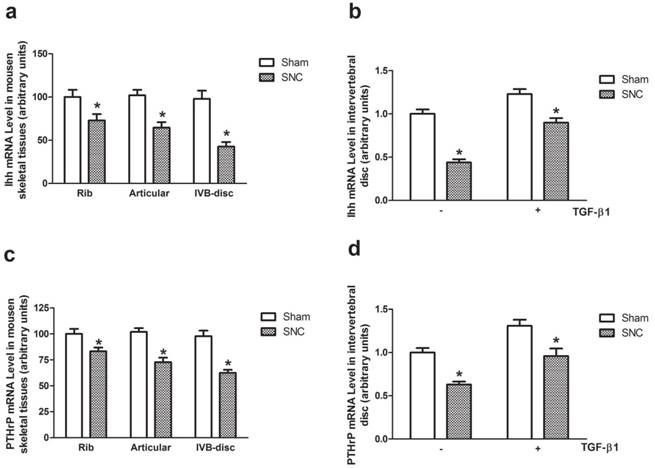 Induction of chondrogenic differentiation. Proteoglycan synthesis was determined in parallel cultures that: (a) Dose dependent effects of rhTGF-β1 on proteoglycan synthesis; Treatment with the indicated concentrations of dpIhh (b) or PTHrP(1-34) (c) and in presence or absence of 1 ng/ml of rhTGF-β1 for 7 days. During the last 6 h, cultures were labeled with [35S]-sulfate and incorporation into proteoglycan was measured. Values represent means ± SEM from 3 individual experiments with * p < 0.05, rhTGF-β1 (a), or dpIhh (b) or PTHrP(1-34) (c) treatment vs control at each concentration point by Student's t-test.

As bone-forming cells differentiate into chondrocytes through cellular condensation, synthesis of ColII and a marked increase in ColII mRNA level occur. The continuous and progressive accumulation of ColII and aggrecan mRNA after treatment with rhTGF-β1 in denervation mice suggests that TGF-β1 stimulates chondrogenesis in denervation mice, in line with previous reports [12, 36] and supported in the present study by increased proteoglycan synthesis.

The results in the present study that rhTGF-β1 treatment promoted the denervation-induced increase of ColX mRNA and protein levels was unexpected, since TGF-β typically down-regulates gene expression of ColX and chondrocyte differentiation [37]. Thereout, rhTGF-β1 treatment in denervated-mice increased ColX expression and endochondral differentiation, suggesting a variance in these cell types and tissues under different experimental conditions.

Factors involved in regulating endochondral differentiation are yet to be elucidated. PTHrP was first identified as the causative agent of humoral hypercalcemia of malignancy [38], and is expressed in normal adult and embryonic cells including osteoblasts and chondrocytes [39-41]. PTHrP signals through the same receptor as parathyroid hormone (PTH), a G-protein coupled receptor with seven membrane-spanning domains expressed early in endochondral bone formation and in transition zone chondrocytes [42]. Thus, PTHrP is a clear marker for cartilage differentiation. In the present study, we observed that denervation decreased PTHrP mRNA levels, similar to a recent report in which chronic metabolic acidosis (a condition with denervation-like catabolic effects) also down-regulated endochondral differentiation [43].

Ihh, a secreted protein expressed early in hypertrophic chondrocytes, may be involved in regulation of hypertrophic conversion via a feedback loop through the perichondrium [23, 25, 39, 44]. However, the mechanism by which Ihh regulates endochondral differentiation is unclear. It is unlikely that Ihh regulates expression of PTHrP directly, but rather is part of a larger pathway. In the present study, denervation reduced gene expression levels of Ihh, supporting the hypothesis that denervation inhibits endochondral differentiation. The present results agree with a previous report in which mouse recombinant N-terminal protein of Ihh upregulated the gene expression of ColX [45], and suggest that Ihh may act through a mechanical signal during cartilage growth and repair.

Most existing therapies in the treatment of denervation patients act primarily through stimulation of bone formation, but inhibition of bone resorption has been relatively neglected. TGF-β has a powerful modulatory effect in bone formation and resorption, and evidence documents a role for TGF-β in chondrogenesis and osteogenesis [46, 47]. In the present study, we describe for the first time that TGF-β prevents denervation-reduced bone formation in mice through its effect on chondrogenesis. The data strongly suggests that TGF-β exhibits a therapeutic effect in denervation-induced reduction of endochondral bone formation. The mechanism by which this effect occurs requires further study, so that a complete understanding of the interactions among the signaling pathways may lead to therapeutic strategies for prevention of bone loss after denervation.