Osteoporosis is the most common skeletal disorder characterized by low bone mass and deterioration of bone quality, leading to an increased risk of fragility fracture [1, 2]. Osteoporosis is a major cause of mortality and morbidity through its association with age-related fractures. The vertebra and proximal femur are highly susceptible to fractures in osteoporotic patients [1-3]. With the rapid increase in the elderly population, the number of osteoporotic fractures worldwide is on the rise, which will pose increasingly important health and socioeconomic burden. Therefore, there is an urgent need to direct at identifying effective strategies for preventing osteoporosis.

Osteoporosis is one of many chronic conditions that might be influenced by the entire life course including early life events during pregnancy [12-14]. Bone size and bone density increases from embryogenesis through intrauterine, infant, childhood, and adolescence to reach a peak in early adulthood. The peak bone mass achieved is a strong predictor of later osteoporosis risk. The concept that poor nutrition during organ development could lead to increased risk of disease later in life was originally called the Barker hypothesis, then the fetal origin of adult disease, and now the developmental origins of health and disease [15]. A substantial body of evidence indicates that early life events, including maternal nutritional state and maternal stress, influence the development of many diseases, such as diabetes, obesity, cardiovascular diseases, osteoporosis, and neurodegenerative diseases [15, 16].

ddY mice were purchased from Chubu Kagaku Shizai Co., Ltd. (Nagoya, Japan) and housed in the Division of Animal Experiments, Asahi University School of Dentistry under temperature- and humidity-controlled conditions (23 ± 1°C, 55 ± 25%) and a 12:12 h light/dark cycle (light period, 6:00-18:00; dark period, 18:00-6:00). All animals had free access to tap water and standard rodent pellet chow (CE-2, CLEA Japan, Inc., Tokyo, Japan). All experiments were performed according to the guidelines for the care and use of laboratory animals of Asahi University. The ethics committee of Asahi University School of Dentistry approved the study. Twelve-week-old female mice (n=24) were housed with a sexually experienced male for one night (the next day was designed as gestational day 0) and then placed in individual cages. The mice were randomly divided into control, stress, and stress with chewing groups (n=8/group).

Mice were exposed to restraint stress for 45 min, three times a day, from day 12 of pregnancy until delivery, by placing them in a ventilated plastic restraint tube (inner diameter: 4.5 cm), in which they could move back and forth but not turn around, as previously reported [9, 10, 20]. Mice in the stress with chewing group were allowed to chew on a wooden stick (diameter: 2 mm), which is made from virgin white birch tree, for 45 min, three times a day during the stress period [10, 21]. The wooden sticks were examined for signs of chewing at the end of the experimental period and all of them showed signs of chewing. All dams delivered their offspring vaginally. No differences in offspring birth weight were detected between groups. The offspring were raised by their biologic mothers until wearing. At wearing, male pups were selected from control, stress, and stress with chewing groups, assigned to control (n=15), stress (n=15), and stress with chewing (n=15) groups, respectively, and housed 5 per group according to litter. Five-month-old male mice were used in the following experiments. Body weights of neonatal pups and offspring at 5 months of age were measured.

At 5 months of age, all mice were administered by an overdose of sodium pentobarbital intraperitoneally. As the peak blood corticosterone level occurred at 20:00 [22], blood was sampled at 20:00 as described previously [22]. Animals were decapitated, blood was collected and centrifuged. The serum corticosterone level was measured by radioimmunoassay as reported previously [9, 10, 21]. The serum level of osteocalcin, a bone formation marker, was determined using a mouse osteocalcin enzyme-linked immunoassay kit (Biomedical Technologies, Stoughton, MA, USA). The serum level of N-telopeptide of type I collagen (NTx), a bone resorption marker, was measured using an enzyme-linked immunosorbent assay kit (TECOmedical, Sissach, Switzerland).

The 4th lumbar vertebrae (L4) and femurs were dissected and cleaned of adherent soft tissues. The bone samples were analyzed using cone-beam X-ray micro-CT system (MCTCB100MF, Hitachi Medical Corporation, Kashiwa, Japan) as described previously [23-25]. The L4 vertebral body and the distal femur were scanned with a tube voltage of 50 kV, tube current of 0.1 mA. The voxel size was 10×10×10 μm3. After micro-CT scanning, the image data was transferred to a workstation. The vertebral trabecular bone region was outlined for each micro-CT slice, excluding both the cranial and caudal endplate regions. Within these regions, trabecular bone was separated from cortical bone with boundaries defined by the endocortical bone surfaces. As for the distal femur, the region of interest was defined using 100 slices at approximately 0.5-2.0 mm away from the growth plate. The structural indices were calculated using a 3D trabecular bone analysis software TRI/3D-BON (Ratoc System Engineering Co. Ltd., Tokyo, Japan). TRI/3DBON builds 3D models from serial tomographic datasets for visualization and morphometric analysis as described [9, 10, 25].

The serum corticosterone levels in dams, and body weights and bone metabolic markers in offspring

The serum corticosterone in dams (A), osteocalcin (B), and NTx (C) levels in offspring of the control, stress, and stress/chewing mice. All data represent as mean ± SD. *p < 0.05. 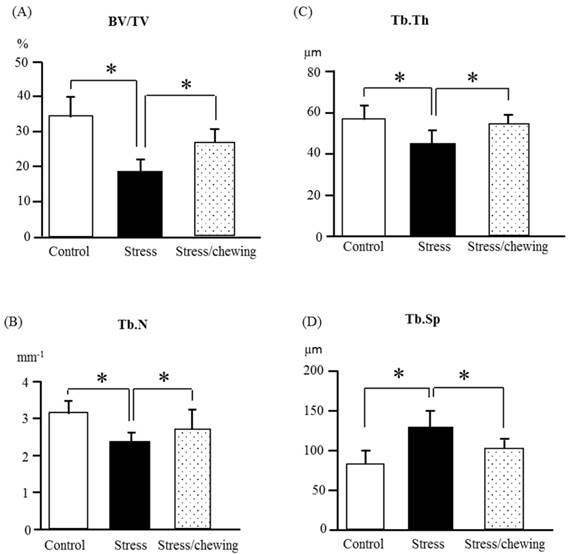 Three-dimensional micro-CT images representative the fourth lumbar vertebral body in the control (A), stress (B), and stress/chewing (C) mice. Images of the sample with the BV/TV that was closest to the mean BV/TV were presented in each group. Scale bar: 0.5 mm.

In the present study, we investigated the effects of maternal active mastication during prenatal stress on chronic stress-induced lower bone mass and bone microstructural deterioration in mice using quantitative micro-CT, histomorphometry, and biochemical markers. We found that allowing dams to chew on a wooden stick during prenatal stress prevents the stress-induced increase in serum corticosterone levels in the dams. Prenatal stress induced a significant decrease of trabecular bone mass both in the vertebra and distal femur of the male adult offspring. Prenatal stress led to decrease of BV/TV by its effects to decrease Tb.Th, Tb.N, and increase Tb.Sp. The changes of trabecular histomorphometric parameters induced by prenatal stress are consistent with those observed in osteoporotic patients [23-25, 28, 29].

Bone undergoes continuous remodeling, in which the old bone is resorbed by osteoclasts and new bone is formed by osteoblasts. Bone remodeling is strictly regulated by various factors. Previous studies showed that exposure to various stressors, such as restraint, immobilization, forced swimming, psychological, and social stressor lead to sustained increase in the circulating corticosterone level. Glucocorticoid-induced osteoporosis is one of the most common forms of secondary osteoporosis, accompanied by increased fracture risk. The detrimental effect of glucocorticoid excess on bone is caused by suppression of osteoblast bone formation and stimulation of osteoclast bone resorption [9-12, 30-32].

There is growing recognition that intrauterine environments may affect bone mineral accrual and thus the later osteoporosis risk [12, 14, 32, 33]. Bone size and bone mass increase from early embryogenesis through intrauterine, infant, childhood and adult to reach a peak. The peak bone mass achieved is a powerful determinant of later osteoporosis risk. Osteoporosis risk might be modified by intrauterine environments. Maternal exposure to various psychological stresses during pregnancy results in abnormalities in offspring in various tissues, including bone, and elevated maternal glucocorticoids likely play a key role in mediating these effects [14, 32]. The placenta serves as a critical interface between maternal and fetal physiology and forms a protective barrier to maternal glucocorticoids [34]. Chronic psychological prenatal stress impairs the placental function, resulting in elevation of the fetal glucocorticoid level, which is directly linking programming effects and increases osteoporosis risk in adult offspring [35]. Some studies indicated that prenatal stress is capable of producing a reduction in birth weight, suggesting intrauterine growth retardation [36]. While others reported that there were no weight changes in prenatal stress offspring [37]. The present studies showed that there was no significant difference in body weight changes among the control, stress, and stress/chewing groups. The difference in the stress protocol and the timing of stress could explain the disparity in findings between studies. The detail mechanism by which prenatal stress cause intrauterine growth retardation needs further investigation. 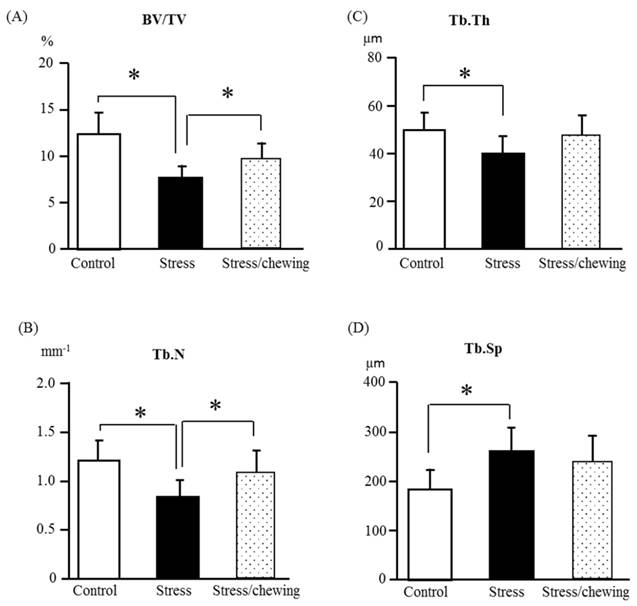 The bone remodeling parameters in the control, stress, and stress/chewing mice. (A) The bone formation rate (BFR/BS), (B) The osteoclast number (Oc.N/BS), and (C) The osteoclast surface (Oc.S/BS. All data represent as mean ± SD. *p < 0.05.

28. Riggs BL, Parfitt AM. Drugs used to treat osteoporosis: the critical need for a uniform nomenclature based on their action on bone remodeling. J Bone Miner Res. 2005;20:177-184

34. Togher KL, O'Keeffe MM, Khashan AS. et al. Epigenetic regulation of the placental HSD11B2 barrier and its role as a critical regulator of fetal development. Epigenetics. 2014;9:816-822