GSK-3β as a target for protection against transient cerebral ischemia

Stroke is a leading cause of death and disability worldwide. Thus, identifying potential new drug targets is critical to developing therapies that will reduce stroke-related brain damage. It is known that early disruption of the blood-brain barrier (BBB) contributes to acute cerebral ischemia-reperfusion injury1 In recent years, new strategies, such as delayed inhibition of VEGF signaling2, and new drug candidates, such as a novel analog of ginkgolide B (XQ-1H)3 a novel adhesion molecule CEACAM14, orosomucoid5, and lavandula officinalis ethanolic extract6, have been tested for their potential to protect the BBB in ischemic stroke models. Because the results from these studies have been promising, increasing attention is turning toward the identification of potential drug targets to protect the BBB after ischemic stroke.

Studies have shown that the serine-threonine kinase glycogen synthase kinase-3β (GSK-3β) is involved in the phosphorylation and degradation of β-catenin10, the key molecule of the Wnt/β-catenin pathway11. Therefore, inhibition of GSK-3β may increase the level of β-catenin and further activate the Wnt/β-catenin signaling pathway. TWS119, a 4,6-disubstituted pyrrolo-pyrimidine, is a potent inhibitor of GSK-3β12. We have recently shown that TWS119 attenuates tissue plasminogen activator (tPA)-induced hemorrhagic transformation after permanent middle cerebral artery occlusion (MCAO)13.

In the present study, we used a rat model of transient MCAO to mimic the clinical scenario of acute ischemic stroke, and administered TWS119 to activate the Wnt/β-catenin signaling pathway. We hypothesized that GSK-3β inhibition would protect the BBB and reduce early ischemia-reperfusion stroke injury.

All protocols used in this study were approved by the Institutional Animal Care and Use Committee at Wuhan University. Adult male Sprague-Dawley rats weighing 250-280 g were purchased from Wuhan University Center for Animal Experiments and housed under standard conditions with a 12:12 h light/dark cycle. Food and water were provided to all animals ad libitum. The operators were blinded to the treatment status of the animals in all experiments.

Focal cerebral ischemia was produced by endovascular occlusion of the left middle cerebral artery (MCA) as described previously14-16 Briefly, rats were anesthetized by intraperitoneal injection with pentobarbital sodium (Dainippon Sumitomo Pharma, Osaka, Japan). Body temperature was maintained at 36.5°C to 37.5°C throughout surgery. After a midline neck incision, the left common carotid artery (CCA) was isolated under a microscope and ligated with a 4-0 silk suture (Ethicon, Issy-Les-Moulineaux, France). The external and internal carotid arteries were temporarily ligated with a 4-0 silk suture. An arteriotomy was performed proximal to the bifurcation of the CCA. A silicone-coated nylon monofilament (40 mm long, 0.26 mm diameter, Beijing Sunbio Biotech, China) was introduced through the arteriotomy and advanced into the internal carotid artery up to a distance of 18-20 mm to occlude the origin of the MCA. At 3.5 hours after this procedure, the rats were reanesthetized, the nylon monofilament was withdrawn to restore MCA blood flow, and TWS119 (30 mg/kg in 1% dimethy sulfoxide, Selleck, Houston, TX, USA)17, 18 or an equal volume of vehicle (DMSO) was administered. After surgery, the rats were returned to their home cages with free access to food and water. A third group of sham control rats underwent the same surgical procedure but the monofilament was not inserted and they were administered only DMSO.

Brain water content was measured with the standard wet-dry ratio method20. Rats were anesthetized and killed by decapitation at 24 h after MCAO. The brains were quickly removed and placed on a dry surface. A 4-mm-thick section of the frontal pole was dissected free before the brain was cut by a brain slicer (Beijing Sunny Instruments Co., Ltd., Beijing, China) and divided into the ipsilateral and contralateral hemispheres. The two hemisphere slices were packaged in preweighed aluminum foil and immediately weighed on an electronic balance to obtain the wet weight. The hemispheres were then dried for 24 h in an oven at 100°C and reweighed to obtain the dry weight. Brain water content was calculated as a percentage with the following formula: (wet weight - dry weight)/wet weight × 100% 21

Infarct volume after MCAO was determined by 2, 3, 5-triphenyltetrazolium chloride (TTC, Sigma, Santa Clara, CA) at 24 h after MCAO. Animals were euthanized, and the brains were quickly collected. Brain tissue was sliced into seven coronal sections (2-mm thick) and stained with a 2% solution of TTC at 37°C for 20 min, followed by fixation with 4% paraformaldehyde. TTC stains normal tissue red, but the infarct area remains a pale gray color. TTC-stained sections were photographed, and Image-J image-processing software was used to calculate the infarct volume. The ratio of infarct volume = infarct area of the ipsilateral hemisphere/total area of the ipsilateral hemisphere × 100%22.

Evans blue (EB) dye (2%, 3 ml/kg, Sigma) was administered intravenously 3 h before the brain was collected. After being perfused with saline, each hemisphere was weighed and homogenized in 4 ml of 50% trichloroacetic acid solution. The homogenates were centrifuged at 10,000×g for 30 min, and the supernatants were collected and diluted with ethanol (1:3). EB content was determined on a spectrophotometer (Epoch™&Take3™, Biotek, USA) at 620 nm and calculated from a standard curve of EB. EB extravasation was expressed as EB extravasation index (EBI): the ratio of absorbance intensity in the ischemic hemisphere to that in the nonischemic hemisphere23.

All data are expressed as mean ± SD. SPSS for Windows 16.0 software package was used to analyze the data. Differences among groups were determined by one-way ANOVA followed by Tukey post-hoc tests. Student's t-test was used to compare the difference between two groups. Differences were considered significant at P values less than 0.05.

Infarct volume at 24 h after transient middle cerebral artery occlusion (MCAO). Rats were treated with vehicle or TWS119 (n=6 rats/group). A. Representative TTC-stained, 2-mm coronal brain sections. B. Quantification of the infarct volume in groups that underwent MCAO and treatment with vehicle or TWS119. Infarct volume was calculated as a percentage as follows: infarct area of the ipsilateral hemisphere/total area of the ipsilateral hemisphere × 100%. No infarction was detected in the sham group. The results are expressed as means ± SD. *P<0.05 vs. vehicle group.

In our study, EB dye leakage was concentrated mainly in the regions of ischemic hemisphere, and BBB leakage was shown with the EBI. We found that EBI of the TWS119-treated group was significantly lower than that of the vehicle-treated group (n=6 rats/group, P<0.05; Fig. 3), indicating that GSK-3β inhibition protects the BBB after transient MCAO.

Blood-brain barrier permeability as measured by Evans blue leakage at 24 h after transient middle cerebral artery occlusion (MCAO). Rats were treated with vehicle or TWS119 (n=6 rats/group). The Evans blue index (ratio of absorbance intensity in the ischemic hemisphere to that in the nonischemic hemisphere) was used to evaluate blood-brain barrier permeability. The results are expressed as means ± SD. *P<0.05, **P<0.01 vs. sham group. 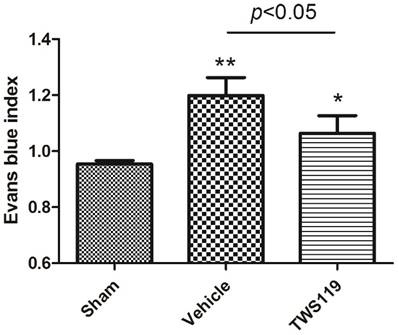 In this study, GSK-3β inhibition by TWS119 reduced neurologic deficit score, brain edema, infarct volume, and BBB disruption. This protection was associated with an early activation of Wnt/β-catenin signaling and an increase in ZO-1 expression. Together, these findings suggest that GSK-3β inhibition by TWS119 attenuates early ischemia-reperfusion injury and protects the BBB.

Western blot analysis of proteins in the Wnt/β-catenin signaling pathway and tight junctions of the blood-brain barrier 24 h after transient MCAO (n=6 rats/group). Representative Western blots and densitometric analysis of (A) total β-catenin, (B) phosphorylated β-catenin, (C) The ratio of p-β-catenin to the total β-catenin, (D) GSK-3β and (E) zonula accludens-1 (ZO-1). GAPDH was used as a loading control. The expression of β-catenin and ZO-1 increased in the TWS119-treated group compared to that in the vehicle-treated group. TWS119 treatment reduced the expression of phosphorylated β-catenin and GSK-3β. Data are representative of at least three independent experiments. The results are expressed as means ± SD. 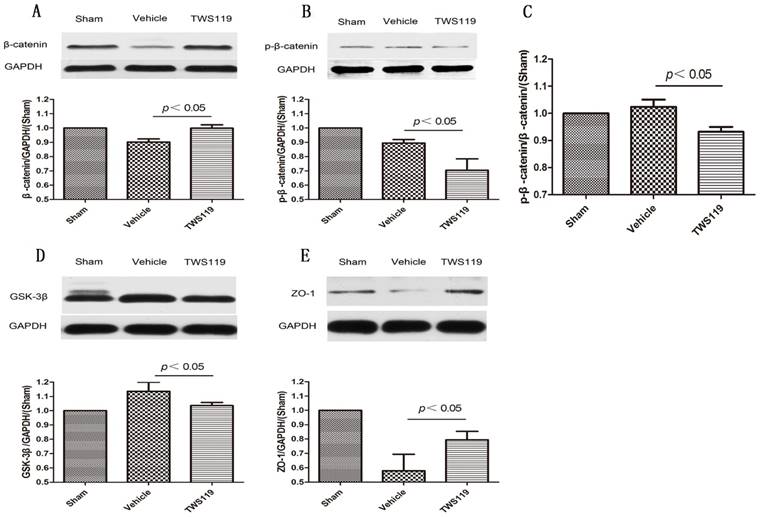 Although many efforts have been made to attenuate ischemic stroke injury, there is no effective therapy that can be used clinically to protect the BBB. The BBB is a key factor that affects acute stroke outcome12 and should be targeted for protection. The European Cooperative Acute Stroke Study (ECASS)-3 has shown that rtPA alteplase has a safe therapeutic window of 3-4.5 h after the onset of stroke symptoms32. Therefore, in our study, we administered TWS119 at 3.5 h after MCAO and found that it reduced the permeability of the BBB. This finding suggests that TWS119 has a protective effect on the BBB after ischemic stroke, and GSK-3β could be a potential target for brain protection, which was consistent with other studies33, 34.

Previous studies have demonstrated the role of the Wnt/β-catenin signaling pathway in the brain's vascular development and BBB formation35. Dickkopf-1, a negative modulator of the Wnt pathway, is involved in the development of ischemic neuronal death36. Growing evidence indicates that Wnt signaling protects the BBB in several brain diseases37. However, the relationship between Wnt/β-catenin signaling and BBB integrity in acute ischemic stroke is still unclear.

To elucidate the underlying mechanisms of action of TWS119, we examined the expression of key proteins in the Wnt/β-catenin pathway as well as tight junction protein ZO-1 at 24 h after MCAO. While suppressing the expression of GSK-3β, TWS119 inhibited phosphorylation of β-catenin and increased its total protein expression38. β-catenin is a key component for activating the Wnt/β-catenin pathway39, and phosphorylation at Ser552 has been shown to induce beta-catenin accumulation in the nucleus and increases its transcriptional activity. However, other studies found that the Ser-552 phosphorylation site did not seem important for modulation of β-catenin transcriptional activity40, 41. In our study, we found that β-catenin was upregulated, whereas GSK-3β and p-β-catenin were downregulated in the TWS119-treated group compared with levels in the vehicle-treated group, indicating that TWS119 may activate the Wnt/β-catenin pathway by inhibiting GSK-3β expression, reducing p-β-catenin, and enhancing β-catenin expression. The tight junction protein ZO-1 participates in the maintenance of BBB integrity and is the major transmembranal protein of tight junctions in the BBB42. ZO-1 controls angiogenesis and barrier formation43. However, whether Wnt/β-catenin signaling can regulate ZO-1 expression after BBB disruption in ischemic stroke is unknown. Our results showed that in the TWS119-treated group, a reduction in BBB permeability was associated with activation of Wnt/β-catenin signaling and upregulation of ZO-1 expression. The sequence of the signaling may need additional research in both in vitro and in vivo models of the BBB.

In summary, our study showed that GSK-3β inhibition with TWS119 protected the BBB and attenuated early ischemia-reperfusion stroke injury. This protection may be related to an early activation of the Wnt/β-catenin signaling pathway and an increase in ZO-1 expression. Thus, the activation of Wnt/β-catenin signaling has potential to protect the BBB after ischemic stroke. However, the specific mechanism needs additional research.