Liver transplantation (LT) has been introduced as a curative treatment for children with end stage liver disease. Since Starzl performed the first successful pediatric LT in 1967 [1], the advances in the surgical techniques, anesthetic management, and immunosuppressant therapy have led to improvements in the long-term survival rate to >80% [2]. Nevertheless, hepatic graft failure may still develop, and often affects patient survival after LT. Death in most cases of pediatric LT occurs within 6 months of the LT [3]. In addition, massive blood loss and subsequent blood transfusion, which are associated with higher morbidity and mortality, are frequently noted during pediatric LT [4-8]. Liver cirrhosis, associated with a bleeding tendency during LT as a result of a complex hemostatic disorder, is not commonly observed in children. In contrast, biliary atresia, a very common disease requiring pediatric LT, is associated with peritoneal adhesion and recurrent inflammation of the bile tree, as most of these patients have previously undergone hepatoportoenterostomy and experience recurrent cholangitis [9]. Thus, peritoneal adhesion in these patients requires a greater amount of blood products and a longer operation time during intraabdominal surgery [10].

The total blood volume of neonates and children is usually small, and hence, there is a greater possibility of massive transfusion during major operations in pediatric patients. Although major advances have been made in surgical and anesthetic management to reduce the use of blood products during LT, the incidence of large blood loss during LT remains high. As the intraoperative blood transfusion requirement is directly related to poor outcomes [11-13], minimizing and predicting the need for massive transfusion during pediatric LT are important. However, only limited information is available regarding the risk factors for intraoperative massive transfusion in pediatric LT recipients.

The institutional review board of Asan Medical Center, Seoul, Republic of Korea approved this study. The medical records from the general ward and intensive care units, as well as data on the operation and anesthesia used, were retrospectively reviewed. We enrolled pediatric patients who underwent LT between December 1994 and June 2015. The exclusion criteria were as follows: incomplete data from medical records, preoperative anticoagulant use, and simultaneous transplantation of another organ. The demographic data, primary diagnosis, donor type, surgical technique for the donor, preoperative laboratory values, and intraoperative variables, as well as the presence of elective/emergent surgery, re-LT, ascites, chronic kidney disease, esophageal varix, fulminant hepatic failure, hepatic encephalopathy, peritonitis, previous abdominal surgery, and portal vein thrombosis were recorded to evaluate the risk factors for intraoperative massive transfusion.

After routine monitoring (pulse oximetry, electrocardiography, and non-invasive blood pressure recording), general anesthesia was induced by using an intravenous bolus injection of thiopental sodium (5 mg/kg), fentanyl (0.5-1 μg/kg), and rocuronium (0.6 mg/kg) or vecuronium (0.15 mg/kg). After tracheal intubation, anesthesia was maintained using 1-2 vol% sevoflurane, 50% oxygen in medical air, a continuous infusion of fentanyl (3-5 μg/kg/h), and rocuronium (0.2 mg/kg/h) or vecuronium (0.05 mg/kg/h). Patients were mechanically ventilated at a constant tidal volume of 8-10 ml/kg, and the respiratory rate was adjusted to maintain the end-tidal carbon dioxide partial pressure between 35 and 40 mmHg during the operation. Arterial and central venous catheters were placed for hemodynamic monitoring and blood sampling. Crystalloid (plasma solution A, CJ Pharmaceutical, Seoul, Korea) and colloid (albumin) were administered during LT.

The surgical technique comprised a bilateral subcostal incision, with extension to the xiphoid, or an inverted T-shaped incision. Total hepatectomy was performed in the recipients after clamping the inferior vena cava, portal vein, and hepatic artery; a venous-venous bypass was not adopted. Prior to engraftment, the donor liver was flushed with 1000 ml of Histidine-Tryptophan-Ketoglutarate solution via the portal vein. Venoplasty of the hepatic vein and/or portal vein in the recipient was preceded by the an-hepatic phase, and engraftment was performed with the anastomosis of the hepatic vein, portal vein, and hepatic artery. We routinely checked the vascular perfusion of the liver graft using Doppler sonography after engraftment. Hemostasis was achieved by direct suture ligation or electrocoagulation. A Roux-en-Y hepaticojejunostomy was performed using interrupted sutures.

The postoperative outcome measures included graft failure and patient mortality. We used the definition of early graft failure reported in previous studies [15-17]. We limited the survival analysis of grafts to 6 months in order to evaluate the influence of massive transfusion on early graft dysfunction and to minimize other factors that may contribute to late graft dysfunction, such as newly developed liver disease. We also defined early patient mortality as death that occurred within 6 months of the surgery. 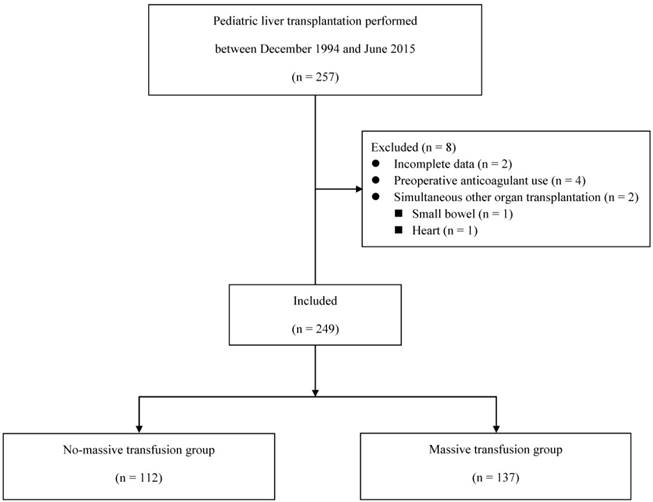 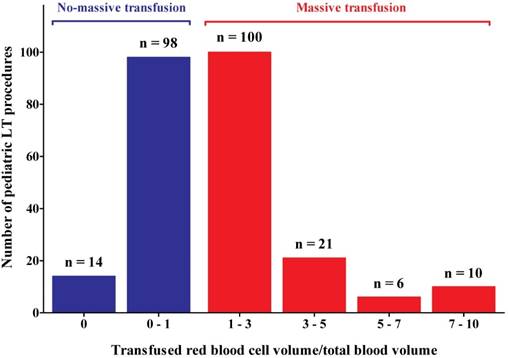 Massive transfusion may be associated with serious complications such as hypothermia, electrolyte abnormalities, immunologic complications, coagulopathy, transfusion reactions, and postoperative mortality [14, 18, 19]. Although the factors predicting blood loss and transfusion during LT have been previously evaluated, those studies primarily included adult patients [13, 20-24]. Moreover, the factors influencing blood transfusion in pediatric LT were evaluated under preoperative conditions, with varying anatomical and surgical factors [4, 5]. However, the results have not been consistent, due to the differences in the preoperative status, surgical techniques [22], massive transfusion definitions [5], and transfusion triggers between studies. In our present study, we followed a commonly used definition of massive transfusion in children [14] and divided the cases into the massive blood transfusion and no-massive blood transfusion groups. Furthermore, we believe that our current results are reliable because the data were collected from a single institution that had highly experienced surgical and anesthetic teams [25-27]. 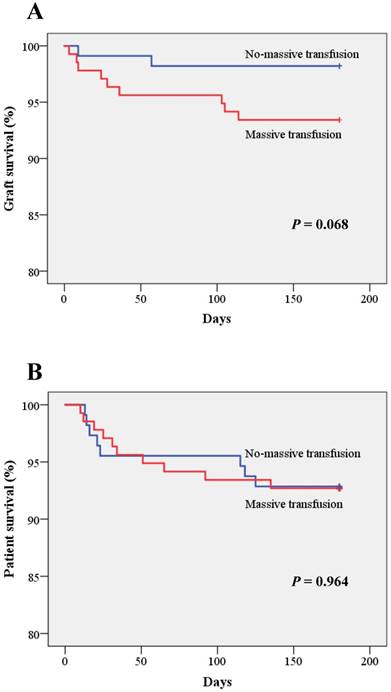 In our present series, a high WBC count was a unique factor that predicted intraoperative massive transfusion during pediatric LT. Previous studies have indicated that bacterial infections are common in patients with upper gastrointestinal hemorrhage [28-30], possibly because of preoperative invasive procedures, bacterial translocation in the intestine, and defects in the scavenging system [29, 31]. Bernard et al. showed that bacterial infection is not only an independent factor of bleeding in liver dysfunction patients, but is also an important prognostic factor for mortality [30]. The relationship between bleeding and bacterial infection in these studies supports our finding that leukocytosis can produce massive bleeding in patients with liver dysfunction. Moreover, peritoneal adhesion is inevitable after trans-peritoneal surgery. Children with biliary atresia, recurrent peritonitis, or cholangitis, which cause inevitable peritoneal adhesion, are commonly encountered, particularly among those with hepatoportoenterostomy. Adhesiolysis during LT can lead to increased blood loss [10], which may then contribute to massive transfusion in patients with coagulopathy or hemodynamic instability. Moreover, bacterial infection can lead to failure of bleeding control in the esophageal varix [32]. Our study suggests that massive transfusion during LT occurs more easily in children who are susceptible to bacterial infection and recurrent inflammation of the abdominal cavity.

Univariate analysis of the risk factors for a massive transfusion during pediatric liver transplantation.

Multivariate analysis of the risk factors for a massive transfusion during pediatric liver transplantation.

There is a possibility of selection bias due to the retrospective nature of the present study. As patients were not enrolled according to predefined criteria, the wide range of age, weight, height, or disease entity may affect our results. However, we assessed almost all the possible variables associated with massive transfusion. Hence, there is minimal possibility of bias in the selection of study patients.

In conclusion, we have found that high WBC count, low platelet count, and cadaveric donor are significant factors for predicting massive transfusion during pediatric LT. This result may offer valuable information on perioperative transfusion management in pediatric recipients who have a high risk of massive bleeding during LT.

The authors have no funding or other conflicts of interest to disclose.

2. Devictor D, Tissieres P. Pediatric liver transplantation: where do we stand? Where we are going to?. Expert Review of Gastroenterology & Hepatology. 2013;7:629-41

21. Xia VW, Fond A, Du B. Ascites, but not hyponatremia, is associated with high intraoperative transfusion and vasopressor requirements during liver transplantation. Transplant Proc. 2006;38:1398-9