Total knee arthroplasty (TKR) is a common major surgical procedure in the elderly, and the number of elderly patients undergoing TKR is increasing [1]. Tourniquet release during the late period of TKR can induce ischaemic-reperfusion injury, eliciting the activation of neutrophils, circulating pro-inflammatory cytokines, and reactive oxygen species [2, 3]. As a result, transient hypotension and acidosis can occur [4, 5], and serious cerebral complications can be induced [3, 6, 7]. Therefore, efforts to minimise these complications can be crucial to anaesthesiologists.

Many clinical trials have been conducted and have shown that RIPC has potential clinical benefits [8, 11]. However, most of the studies on RIPC have been conducted only in the heart or kidney models in animals [9, 10, 12-14], and few studies have evaluated the beneficial effect of RIPC during TKR.

After obtaining approval from the Institutional Review Board (KUH 1160078; granted by the Institutional Review Board of Konkuk University Medical Centre, Seoul, Korea) and informed consent from patients, the study was registered at www.clinicaltrial.gov. (NCT02478216). Patients undergoing TKR were enrolled. Exclusion criteria included the following: 1) emergency operation, 2) underlying neurologic disorder, 3) underlying peripheral vascular disease, and 4) other types of concurrent surgery.

The anaesthetic technique was standardised. The patient arrived at the operation room without premedication. After establishing routine patient monitoring [pulse oximetry, electrocardiography, non-invasive blood pressure monitoring, near infra-red spectroscopy and bispectral index (BIS)] and radial artery cannulation on the opposite side of the operation for invasive systemic arterial blood pressure monitoring and sampling, anaesthesia was induced. The transducer for invasive systemic arterial blood pressure monitoring was positioned at the mid-axillary level in the supine position. The anaesthesiologists, blind to the study, were requested to anaesthetise the patients as below. Thiopental sodium 5 mg/kg was intravenously administered for anaesthesia induction. Remifentanil 5 ng/ml for plasma target concentration was intravenously administered and maintained until the end of surgery using target-controlled infusion (TCI Orchestra® Base Primea, Fresenius Vial, Brezins, France). Rocuronium 0.6 mg/kg was intravenously administered for muscle relaxation after the loss of consciousness under the guidance of peripheral neuromuscular transmission (NMT) monitoring. Tracheal intubation was performed at the train-of-four count of 0. Anaesthesia was maintained with sevoflurane and was titrated to maintain BIS values between 40 and 60. After anaesthesia induction, the patients were ventilated with 40% oxygen in air. The tidal volume was 6 mL/kg (lean body mass), and positive-end expiratory pressure was not utilised. The respiratory rate was adjusted to keep the partial pressure of end-tidal carbon dioxide between 35 and 40 mmHg. Additional rocuronium was administered under the guidance of the peripheral monitoring of NMT. During anaesthesia, phenylephrine 30 µg [if the systemic mean arterial blood pressure (MBP) was below 60 mmHg and the heart rate (HR) was above 40 beats/min], ephedrine 4 mg (if MBP was below 60 mmHg and HR was below 40 beats/min) or atropine 0.5 mg (if HR was below 40 beats/min) was intravenously administered to prevent hypotension or bradycardia. Phenylephrine was continuously infused if the MBP was below 60 mmHg and was continued with repetitive phenylephrine injections. Sevoflurane and TCI of remifentanil were stopped at the end of surgery. Residual neuromuscular paralysis was antagonised with sugammadex 2 mg/kg under the guidance of peripheral NMT monitoring. After tracheal extubation, the patient was transferred to the postanaesthetic care unit (PACU).

Transfusion with packed red blood cells (pRBCs) was performed when the Hct was below 30% in the operation room and general ward during the pre- and post-operative periods. The postoperative bleeding amount was checked over the following 24 h period with a hemovac.

The incidence of postoperative cognitive dysfunction (POCD) using the confusion assessment method (CAM) scores [15, 16] was checked by a neurologist up to postoperative day 7.

Normally distributed continuous data were presented as the mean ± standard deviation (SD). Continuous data, which were not distributed normally, were presented as the median (25%-75%). To compare intergroup differences between the RIPC and control groups, Student's t-test or the Mann-Whitney U-test was performed according to the normal distribution. For categorical variables, the chi-squared test was used. Intergroup differences over time were analysed by two-way analysis of variance for repeated measures and, if significant, Bonferroni's correction was performed for multiple comparisons. Statistical analysis was performed using the Statistical Package for the Social Sciences software 18® (IBM SPSS Inc., Chicago, IL, USA). A P-value less than 0.05 indicated statistical significance.

In the result of ABGA, the PF ratio was significantly higher in the RIPC group at TQ release (P = 0.001) (Fig 3A); however, PaCO2, Hct, and lactate did not differ between the groups (Table 2). The serum LDH level was significantly lower in the RIPC group at Post 1 h and 24 h (P < 0.001) (Fig 3B). Other laboratory data and the serum cytokine levels did not differ between the groups (Tables 3 and 4).

Values are expressed as the number of patients or mean ± standard deviation or median (25% -75%).

Values are expressed as the number of patients or mean ± standard deviation or median (25% -75%).

CONSORT flow diagram for the study. 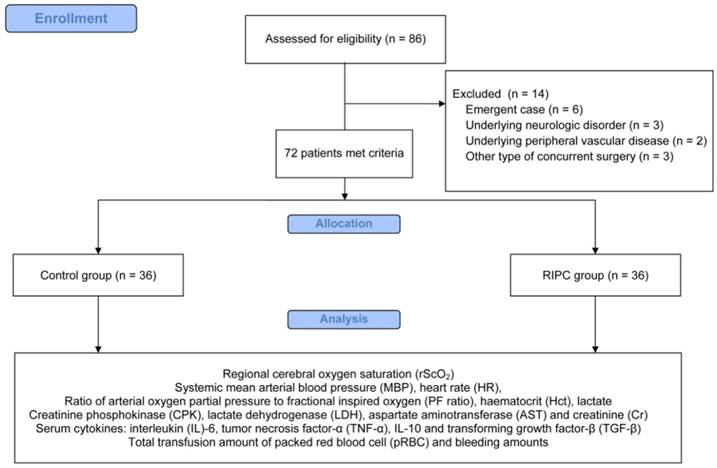 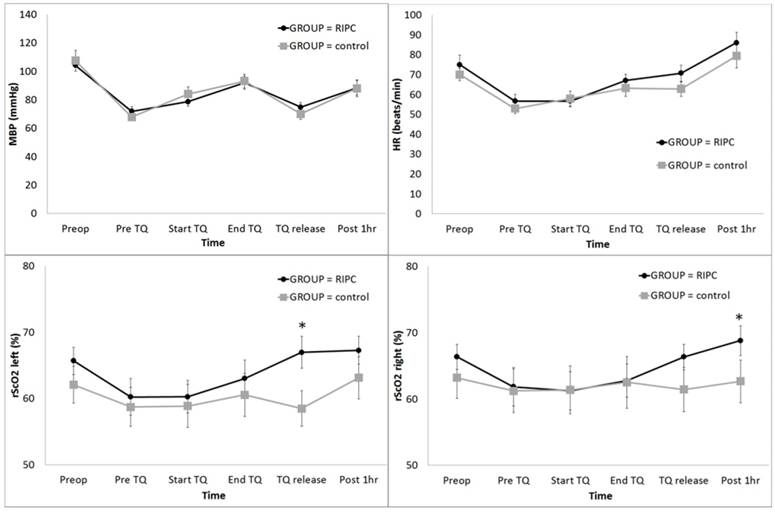 Values are expressed as the mean ± standard deviation or median (25%-75%). 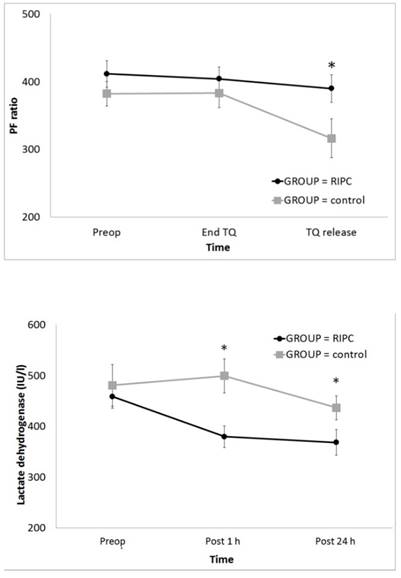 The present study showed that RIPC ameliorated the regional cerebral oxygenation after tourniquet release during TKR. Additionally, pulmonary oxygenation was improved after RIPC during TKR. The total transfusion and bleeding amount up to 24 h postoperatively were significantly reduced by RIPC after TKR. Furthermore, RIPC was helpful in preventing serum LDH elevation after TKR.

In general, the ischaemic reperfusion injury reaction starts from tourniquet release; RIPC could have an effect after tourniquet release and during the postoperative period. Considering that the postoperative (not intraoperative) transfusion and bleeding amount were significantly lower in the RIPC group, we could presume that RIPC reduced the bleeding amount after TKR. The inflammatory response is known to impair normal haemostasis and increase the risk of bleeding [26]. However, the anti-inflammatory effect RIPC during TKR may attenuate the inflammatory reaction after tourniquet release, and the postoperative bleeding and related transfusion could be reduced in the present study. Additionally, regarding postoperative bleeding, we should observe the change in the LDH level after tourniquet release in the present study. The serum LDH level was significantly lower in the RIPC group than in the control group up to 24 h postoperatively. The LDH level is a representative factor of tissue damage, especially muscle damage [27]. Surgical injury and stress induce muscle damage and activate the inflammatory response. Therefore, we could assume that RIPC reduces the inflammatory response and related muscle damage; consequently, the serum LDH level could be lowered in the present study. Several previous studies have supported our assumption by showing that ischaemic preconditioning was helpful in reducing the serum LDH level [24, 25]. In addition, previous animal studies have revealed that cerebral hypoxia increases the serum LDH level [28-31]. Therefore, higher cerebral and pulmonary oxygenation after RIPC may also be additional contributing factors to the low serum LDH level in the present study.

The serum cytokine level did not show significant differences after RIPC application in the present study. Numerous studies have evaluated the change in the serum cytokine level after RIPC, but the results were not uniform. Cheung et al. revealed the beneficial effect of RIPC during cardiac surgery, although the serum cytokine level did not significantly change after RIPC [10]; they stated that the non-significant change of cytokine was related to the peak level of the postoperative cytokine reaction. Remote ischaemic preconditioning activates several immune pathways, such as neural and humoural pathways, and presents an organ protective effect [32]. Among these pathways, numerous immune responses can emerge during TKR; surgical stress itself could provide confounding factors that influence the change in the serum cytokine level. Thus, serum cytokine change may not be expressed as significantly in the present study. Additionally, RIPC should be preceded by an organ-specific ischaemic insult; however, there was only hypoperfusion after tourniquet release, without cerebral and pulmonary ischaemia in our study design. Likewise, the actual regional cerebral saturation was maintained within a normal range, even if it was higher in the RIPC group. Thus, significant changes in serum cytokine levels may not be expressed in our study. However, RIPC during TKR did provide clinical benefits, such as improved oxygenation and reduced bleeding.

Many elderly patients experience POCD after TKR under general anaesthesia [33, 34], and it is important because postoperative recovery is impaired by POCD [35, 36]. There could be various factors that influence POCD and, especially, cerebral and pulmonary oxygenation could be a crucial cause [37]. Therefore, an adequate intraoperative oxygen supply for all vital organs such as the brain or lung is essential if postoperative complication is to be avoided. There was no POCD in the present study.

In conclusion, RIPC increased cerebral oxygenation after tourniquet release during TKR by improving pulmonary oxygenation. Additionally, RIPC decreased the transfusion and bleeding amount with the serum LDH level. RIPC is a safe, effective, and easy method to apply in clinical fields. Although RIPC showed some benefits, further experiments are clearly needed to establish the efficacy of RIPC during TKR.

This paper was written as part of Konkuk University's research support program for its faculty on sabbatical leave.

30. Tskitishvili E, Pequeux C, Munaut C, Viellevoye R, Nisolle M, Noel A. et al. Use of Estetrol with other Steroids for Attenuation of Neonatal Hypoxic-Ischemic brain injury: to combine or not to combine?. Oncotarget. 2016:25