Involvement of necroptosis, a newly recognized cell death type, in steroid-induced osteonecrosis in a rabbit model

We investigated the role of programmed necrosis (necroptosis), a newly recognized form of cell necrosis that has been implicated in the development of steroid-induced osteonecrosis. We used an osteonecrosis model in which 30 Japanese white rabbits each weighing 3.5kg were injected once with methylprednisolone at 20 mg/kg body weight into the right gluteal muscle. Ten animals killed 14 days thereafter were designated as S14d groups, while another 10 animals injected with necroptosis, a specific inhibitor of necrostatin-1 i.v. at 1.65mg/kg on the same day as the steroid were also killed on the 14th day and designated as SN14d group. As a control, 10 animals injected only with physiological saline were studied as N group. After the animals were sacrificed the bilateral femoral bone was examined histopathologically and the presence of osteonecrosis determined. Furthermore, animals subjected to the same treatment and killed on the 3rd day after drug administration were set up as S3d group and SN3d group, and Western blotting of Receptor-interacting protein ( RIP ) 1 and RIP3 in femoral bone performed. The osteonecrosis rate was 70% in S14d group, and 0% in both N and SN groups. In 2 of 10 animals in SN group fatty marrow was found. On Western blotting significantly increased expression of both RIP1 and RIP3 was noted in S3d group, confirming that Nec-1 was suppressed. Necroptosis mediated by RIP1 and RIP3 expression was thought to be implicated in the development of steroid-induced osteonecrosis. Also, by suppressing expression of RIP1 and 3 with the administration of Nec-1 the osteonecrosis rate was significantly decreased. These results suggest that necroptosis may have potential as a novel target for both elucidating the mechanisms underlying steroid-induced osteonecrosis and establishing more effective prophylactic countermeasures.

The developmental mechanisms of steroid-induced osteonecrosis of the femoral head have been investigated from a variety of aspects, and thus far factors such as steroid-induced coagulation/fibrinolytic system and lipid metabolism abnormalities, blood flow disturbances, and oxidative stress have all been implicated [1-3]. Moreover, as preventative approaches the administration of lipid metabolism enhancing agents having antioxidant effects or of antioxidants such as vitamin E and reduced-Glutathione has been demonstrated to achieve a significant inhibitory effect [4-7]. However, much still remains obscure about the developmental mechanisms of osteonecrosis even at the present time. One reason for this is that since, in general, necrosis is a non-programmed type of cell death analysis of its molecular mechanisms has not proceeded very far. The situation regarding the mechanisms underlying steroid-induced osteonecrosis is similar in that despite the extensive research focused on this subject many points remain unclear. For this reason additional investigations from diverse viewpoints are still very much needed.

Meanwhile, various studies have recently implicated necroptosis in the pathogenesis of necrotic lesions, and its importance in this context has been increasingly recognized. Necroptosis is a new concept of cell death recently proposed to help explain necrosis that suddenly becomes uncontrollable [8,9]. Necroptosis is a programmed necrosis, and a signal of cell death that has been found to be involved in various necrosis-related disorders including cerebral infarction, cardiac disease, and some intestinal disorders. At present, necroptosis is also recognized to play a role in various other contexts such as ischemia-reperfusion injury, elimination of various kinds of viral infection, onset of drug-induced pancreatitis, and diseases induced by ischemia-hypoxia [10].

Necroptosis has also been said to influence the role played by receptor-interacting protein (RIP) 1 and RIP3 in cell death, and to play roles in disease development and progression [11]. On the other hand, necroptosis has been shown to be suppressible by the RIP1 inhibitor necrostatin-1 (Nec-1) [12].

1) Thirty adult female Japanese white rabbits (mean body weight 3.5 kg) were injected once with methylprednisolone at 20 mg/kg body weight into the right gluteal muscle, and 10 animals were killed 14 days after steroid administration and designated as group S14d. Another 10 animals injected i.v. with necroptosis, a specific inhibitor of Nec-1 at 1.65mg/kg on the same day as the steroid were also killed on the 14th day and designated as SN14d group. As a control (N group), 10 animals administered only physiological saline as a vehicle injection were also compared.

Immediately after the animals were killed the bilateral femurs were isolated and fixed in 10% formalin for 1 week, and the specimens were decalcified in 10% EDTA. The specimens were then embedded in paraffin, and cut into 4 mm sections.

2) Having noticed that the process leading to osteonecrosis develops within 3 days of steroid administration, on day 3 after steroid administration we used Western blot method to study the expression of RIP1 and RIP3 (S3d group, n=5). In addition, like in experiment 1, Nec-1 was injected i.v. at 1.65 mg/kg on the same day as the steroid, and on day 3 bilateral femoral head bone was harvested from 5 animals, which were designated as SN3d group. As a control, 5 animals injected only with physiological saline were compared as N group. Each group consisted of 5 animals, and bilateral femoral head bone was cryopreserved at -80˚C after resection. All protocols in this study were performed in accordance with the guidelines of the Animal Research Committee of Kanazawa Medical University.

Quantification of the Western blot results

Protein quantification was done using analytical software “Multi Gauge” (FUJIFILM, Tokyo, Japan). β-actin was used as the control for all specimens in each group. All values were expressed as the mean ± SD, and Arbitrary Units (AU) were used at the time of measurement.

RIP1 and RIP3 levels were expressed as the mean ± SD. Statistical analysis was performed using analysis of variance with Dunnett's multiple comparison test. By using this test we were able to determine the point in time after administration of steroid that RIP1 and RIP3 levels showed any significant change, as compared with the values in N group. The rate of ON development was compared between S14d and SN groups using Yates's modified chi-squared test. P values less than 0.05 were considered significant. Statistical analysis was performed using StatView J-5.0 software (SAS Institute).

Osteonecrosis was not found in any of the animals of N group. In S14d group, osteonecrosis was found in 7 of 10 animals (70%), consistent with previously reported results. Necrotic areas in group S14d were clearly demarcated from the surrounding normal tissue. Empty lacunae were found in bone trabeculae, and the surrounding bone marrow tissue also showed necrotic changes (hematopoietic cell and fat cell necrosis). On the other hand, in SN group, osteonecrosis was not found in any of the animals for an osteonecrosis rate of 0% and representing a significant decrease as compared to S14d group (p<0.05). However, findings suggestive of steroid-induced fatty marrow were noted in 2 animals. (Figure 1) 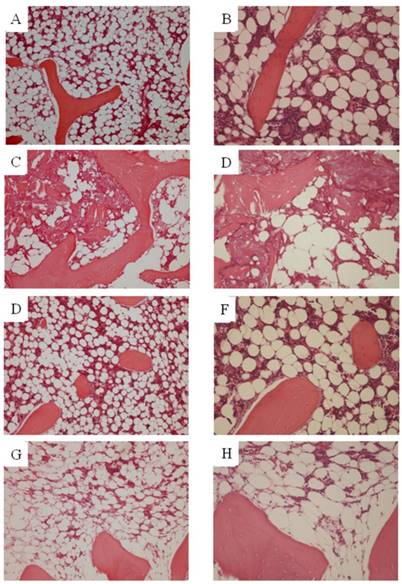 Western blot for RIP1 and RIP3

The regulation of cell death is extremely important both physiologically and pathologically, and is in general classified into apoptosis and necrosis. Apoptosis is a kind of programmed cell death implemented by a mechanism in which caspase, etc. are genetically inhibited and physiological mechanisms such as morphogenesis in the developmental process and removal of virally infected cells are involved [15]. On the other hand, hitherto the molecular mechanisms of necrosis have not been extensively analyzed despite its purported importance in various pathological states. One reason for this is that necrosis has been classified as an incidental type of non-programmed cell death induced by factors such as excessive physical stress. However, recently, analyses of cell death mediated by Death receptors such as FAS have been conducted, and the existence of a programmed type of necrosis. called necroptosis, has been reported [16,17].

Hitherto diseases associated with necrosis have been considered difficult to control because of the non-programmed nature of the necrosis. But more recently, necroptosis has been increasingly implicated in this kind of disease, and RIP1 has been found to be essential for the establishment of necroptosis [18]. Moreover, necrostatin 1 has been identified as a necroptosis specific inhibitor mediated via inhibition of RIP1 [8].

Necroptosis has also been implicated in ischemic necrosis such as that seen in cerebral infarction. Degterev et al recently reported that the necrosis-like neuron death seen in mouse cerebral infarction and traumatic cerebral injury models is inhibited by Nec-1 administration resulting in improvement of the pathological findings [8,12,19]. Nec-1 has similarly been reported to mitigate the injury associated with cerebral ischemia [12]. 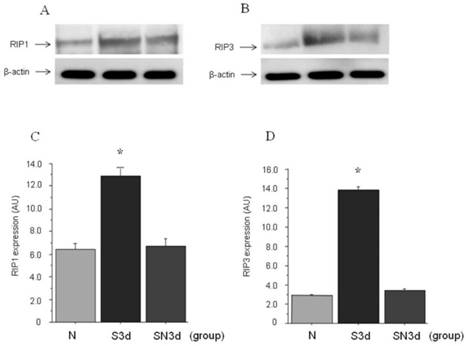 However, as is well known, steroid use is associated with the development of porosis. In the present study too porosis-like changes in bone marrow were found in 2 animals.

If considering inhibition of bone marrow changes such as porosis as well, it may also be necessary to determine the optimal dosing and number of administrations of Nec-1.

The results of this study showed that after steroid administration an increase in the expression of RIP1and RIP3 was found in femoral head bone, and that the administration of necrostatin significantly inhibited the expression of RIP1 and RIP3 and development of osteonecrosis. These results suggest that RIP1 and RIP3 may play an important part in steroid-induced osteonecrosis development. For this reason, necroptosis may represent a novel target for elucidating the mechanisms underlying steroid-induced osteonecrosis and suggesting new preventative approaches.