TUSC3 was recently identified as a potential tumor suppressor gene in a variety of human malignancies. However, no data are currently available regarding the expressions of TUSC3 in esophageal cancer (ESCC).The purposes of this study was to investigated the expressions of TUSC3 in ESCC tissues and assess the relationship between TUSC3 levels and clinico-pathological characteristics of ESCC patients. TUSC3 protein expressions were evaluated by immunohistochemistry (IHC) on tissue microarray slides in esophageal cancer, which included 95 esophageal squamous carcinoma specimens (ESCC), and 75 normal esophageal mucosa (NEM). We found that TUSC3 in ESCC was significant lower than that in NEM (P=0.000). According to multi-clinical classifications, TUSC3 level varied significantly with TNM stage, T stage, and N stage (p<0.001, p=0.0368, p<0.0001, respectively). Univariate analysis showed that gender, TNM stage, T stage, N stage, TUSC3 expression were prognostic factors for survival. Multivariate analysis showed that in our study, only TUSC3 expression was independent prognostic factors for ESCC. Our results indicated for the first time, a combined analysis of TUSC3 expressions as well as the clinical variables will help predict the prognosis of ESCC patients. Further large-sample validation and functional analysis should be performed to evaluate its potential prognostic and therapeutic values for ESCC patients.

Esophageal cancer is the 8th most frequently diagnosed cancer and the 6th most common cause of cancer-mortality worldwide[1]. Esophageal cancers are classified as esophageal adenocarcinoma (EAC) and esophageal squamous cell carcinoma (ESCC) according to histological type in clinical practice. Particularly, ESCC accounts for 95% of all esophageal cancers in China and the five-year survival rate is low, due to its late diagnosis[2]. The majority of patients present with the advanced stage, at which point ESCC patients are unable to undergo a radical treatment[3]. ESCC is extremely aggressive and often results in a dismal prognosis. An improved understanding of ESCC is urgently needed to identify novel biomarker and effective therapeutic strategies for eshophagus cancer patients.

Tumor suppressor candidate 3 (TUSC3), a novel tumor suppressor gene, originally has been known to be responsible for autosomal recessive mental retardation for several years[4-6]. Only recently was TUSC3 identified as a tumor suppressor gene when it was found deleted in a variety of human malignancies[7, 8]. The protein is localized in the endoplasmic reticulum and encodes a subunit of the endoplasmic reticulum-bound oligosaccharyl transferase (OST) complex, which is primarily responsible for protein N-linked glycosylation[9]. Studies showed that disfunction or deletion of TUSC3 exert its oncological effects as a modulator by inhibiting glycosylation efficiency and consequently inducing the endoplasmic reticulum stress and cell malignant transformation[10-13]. However, no data are currently available regarding the expressions of TUSC3 in ESCC. In the present study, we investigated the expressions of TUSC3 in ESCC and the relationship between TUSC3 expressions and the clinico-pathological parameters of ESCC patients, with an emphasis on prognostic factors that correlate with its survival time.

Immunohistochemistry (IHC) staining was performed directly on the tissue slides. Briefly, after incubation for 2 hours at 56°C, the slides were dewaxed with xylene and rehydrated through graded alcohols (100%, 90%, 70% and 50% alcohol; 5 minutes each). Endogenous peroxidase activity was blocked with 3% H2O2 for 15 minutes. For antigen retrieval, sections were incubated in sodium citrate buffer (0.01 M, pH 6.0) for 20 minutes in a household microwave oven (600W). Then, the slides were incubated with 10% normal goat serum to block nonspecific binding sites. Thereafter, the slides were incubated with the TUSC3 goat polyclonal antibody (Santa Cruz, USA, 1:100 final dilution) overnight at 4°C. After washing, the bio-labeled secondary antibody, rabbit anti-goat IgG (ZSGB-Bio, China), was applied at a 1:200 dilution for 40 minutes at 37°C. The sections were then stained with diaminobenzidine (DAB). Finally, the sections were counterstained with hematoxylin and eosin, dehydrated with graded alcohol and mounted using neutral gum. A digital pathology system for stained cells scoring was performed by Aperio ImageScope (Aperio Technologies, Inc., Vista, CA).

Immunoreactivity was observed in the cytoplasm of cells and the scoring was based on cytoplasmic staining. Immunoreactivity for TUSC3 expressions was independently evaluated by two pathologists from the Qianfoshan hospital and categorized according to the immunoreactive score (IRS): IRS = SI (staining intensity) × PP (percentage of positively stained cells). SI was determined as 0 (negative), 1 (weak), 2 (moderate) or 3 (strong). PP was scored as 0 (negative), 1 (<25% of the cells), 2 (25%-50% of the cells), 3 (50%-75% of the cells), or 4 (>75% of the cells). A final score was then calculated by multiplying the above two scores. Additionally, all of the specimens were divided into two groups showing negative or positive expressions by using an IRS of 6 as the cut-off value.

bTNM staging is defined according to the seventh edition of the tumornodemetastasis classification for malignant tumors.

The SPSS 13.0 software was used for the statistical analyses. Levels of TUSC3 expressions were compared using a rank sum test. Comparisons of positive rate between two groups were performed using a Fisher exact test and the Spearman correlation method was used to evaluate the association of scores. The significance of correlations between clinical pathological parameters (age, gender, TNM-stages, T-stage, N-stage, differentiated degree, and mass location) and IRS of TUSC3 were determined using Fisher's exact test. All reported P values were two-sided, and P < 0.05 was considered statistically significant. Survival analysis and curves were established according to the Kaplan-Meier method and were compared using the log-rank test. Cox's regression was used to perform the multivariate survival analysis. Overall survival(OS) was defined as the elapsed time from the initial treatment date to the death or to the patients last visit. The initial recurrence was categorized as locoregional recurrence or distant metastasis depending on the location of the recurred lesion. A receiver operating characteristics (ROC) curve analysis was performed to assess the cut-off for TUSC3 levels in patients with ESCC and NEM. The area under curve (AUC) and p-values were evaluated. Results were considered to be statistically significant with a P value <0.05.

Detection of TUSC3 level in ESCC patients and healthy controls

Comparison of TUSC3 expression between NEM and ESCC.

a Fisher exact test was used to analyze the positive rates of TUSC3 expression. 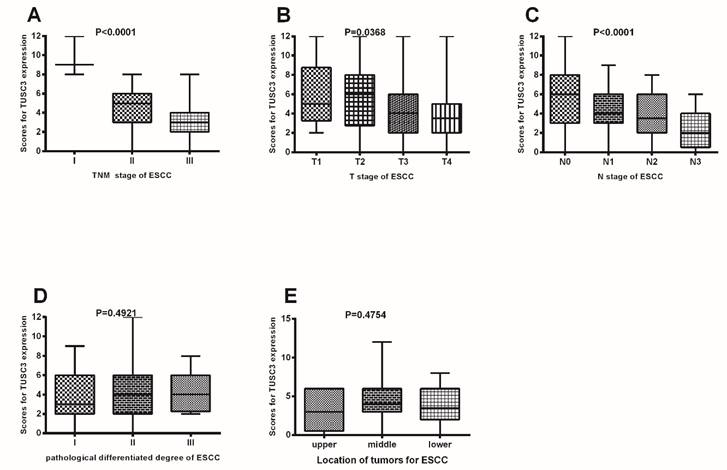 Association between TUSC3 expressions and the clinical-pathological characteristcs of ESCC

Correlations of TUSC3 levels with clinical-pathological characteristcs of ESCC

Univariate and multivariate analysis of prognostic factors for ESCC

At the median follow-up of 16 months (range1-97months), the median OS time were 16 months. TUSC3 expression was divided into two groups according to the ROC analysis and defined ≥6 as positive expression, providing the best discrimination between patients and controls regarding optima values of sensitivity and specificity. Kaplan-Meier analysis revealed that low TUSC3 expression was associated with shorter overall survival (P<0.0001; Figure 4).

ESCC comprises 60-70% of all cases of esophageal cancer, which accounts for 5% of all cancer deaths worldwide[1, 15]. By the time the first symptoms appear, such as difficulty swallowing, ESCC has already well progressed. Therefore, there is an urgent need for reliable predictors and indicators of diagnosis and prognosis for ESCC.

TUSC3 has been recognized as a novel tumor suppressor gene involved in multiple-tumor development. The clinical characteristics of TUSC3 expression levels in several human tumors have been determined. Marta[10] found that TUSC3 plays a role in metastasis and that loss of TUSC3 is negatively related with lymph node metastasis in larynx and pharynx squamous cell carcinomas. Dietmar et al [11]found that TUSC3 loss may facilitate tumor growth. Ahmed et al[12] found that TUSC3 is involved in spermatogenesis in the testis and plays a role in normal prostate development. Peter Horak et al[13] found that TUSC3 expression is frequently lost in prostate cancer cell lines, leading to increased proliferation, migration and invasion of cancer cells. Our previous study showed TUSC3 was involved in the development of SCLC (Oncology letters accepted, data not shown). However, relatively little is known about the significance of TUSC3 expressions in ESCC patients. To the best of our knowledge, this is the first study that analyzes the relationship between the TUSC3 expression levels and the clinical characteristics of ESCC patients.

Univariate and multivariate analysis of the association of prognosis with clinicopathological characteristics and TUSC3 expression in ESCC patients. 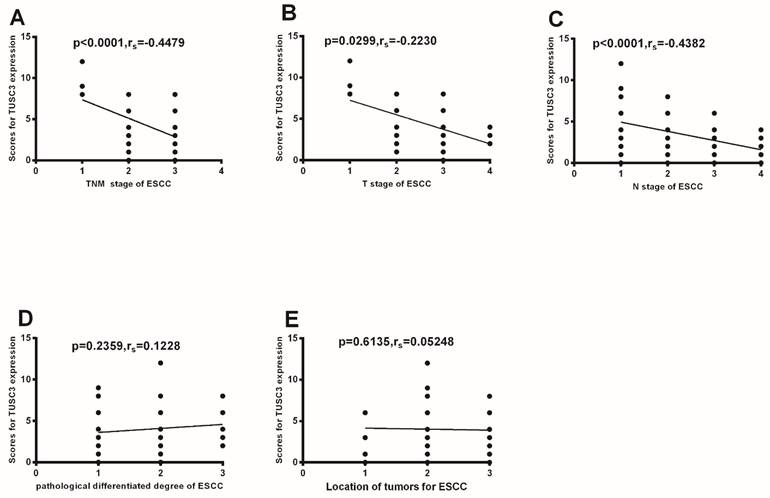 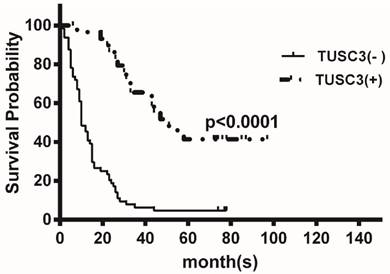 Using tissue microarray technology, we found that there was significant difference between ESCC group and NEM group in TUSC3 expression rate (χ2 = 0.000, P = 0.000; Table 2). Furthermore, regarding the TNM stage of ESCC, significant differences in TUSC3 expressions were identified among patients with different TNM staging (Stage I to Stage III) in the ESCC patients (P<0.0001, Fig. 2A). Further correlation analysis also confirmed the above results (P<0.0001; rs=-0.4479, Fig.3A). As we all know, TNM stage is an index to reflect tumor progression in clinical practices[15].TUSC3 expression may be a useful predictor of the progression of ESCC.

The major limitation of our study is the relatively small number of samples included in our study that might result in imprecise evaluation of TUSC3 levels and its correlation with other clinical indices. Our further study will verify the above results using a larger sample size. In addition, the mechanism through which TUSC3 was involved in the development of ESCC needs to be further studied.

In conclusion, A combined analysis of TUSC3 expressions as well as the clinical variables will help predict the incidence of lymph node metastasis and invasion degree for ESCC patients. Notably, our findings provide the first evidence that a loss or reduce of TUSC3 may be associated with poorly prognosis of ESCC patients.