Background: Chronic inflammation plays a critical role in the progression of atherosclerosis (AS). This study aimed to determine the effects of the CXC chemokine ligand 16 (CXCL16)/CXC chemokine receptor 6 (CXCR6) pathway on cholesterol accumulation in the radial arteries of end-stage renal disease (ESRD) patients with concomitant microinflammation and to further investigate the potential effects of the purinergic receptor P2X ligand-gated ion channel 7 (P2X7R).

Methods: Forty-three ESRD patients were divided into the control group (n=17) and the inflamed group (n=26) based on plasma C-reactive protein (CRP) levels. Biochemical indexes and lipid profiles of the patients were determined. Surgically removed tissues from the radial arteries of patients receiving arteriovenostomy were used for preliminary evaluation of AS. Haematoxylin-eosin (HE) and Filipin staining were performed to assess foam cell formation. CXCL16/CXCR6 pathway-related protein expression, P2X7R protein expression and the expression of monocyte chemotactic protein-1 (MCP-1), tumour necrosis factor-α (TNF-α), and CD68 were detected by immunohistochemical and immunofluorescence staining.

Conclusions: Inflammation contributed to foam cell formation in the radial arteries of ESRD patients via activation of the CXCL16/CXCR6 pathway, which may be regulated by P2X7R.

CXCL16, which was originally described as a scavenger receptor for phosphatidylserine and oxidized low-density lipoprotein (SR-PSOX), is one of the few scavenger receptors that has two distinct forms: membrane-bound and soluble. The membrane-bound form of CXCL16 binds and internalizes oxidative low-density lipoprotein (oxLDL) and promotes adhesion of cells expressing its cognate receptor, CXCR6[6, 7]. In contrast, soluble CXCL16, produced by proteolytic cleavage via ADAM10 and ADAM17[8, 9], acts as a chemotactic factor for CXCR6-expressing cells, such as natural killer T (NKT) cells and polarized T helper cells[10, 11]. Wuttge et al.[12] found that the expressions of CXCL16 and CXCR6 were increased in human carotid plaques compared with the normal vein and artery, and interferon-γ (IFN-γ) upregulated CXCL16 protein expression both in vivo and in vitro. Gutwein et al.[13] also reported that hyperglycaemic conditions increased CXCL16 and reduced ADAM10 expression, which led to increased uptake of oxLDL in podocytes. These findings suggest that the CXCL16/CXCR6 pathway may contribute to the progression of atherosclerosis in ESRD patients.

P2X purinergic receptors (P2XRs) are plasma membrane cation channels selective for Na+, K+ and Ca2+ that are directly activated by extracellular adenosine triphosphate (ATP)[14]. Seven P2X receptor subunits (P2X1-7R) have been identified thus far[14]. P2X7R in particular has strong therapeutic potential: this receptor is expressed in cells of the immune system and has a critical role in the normal immune response[15]. However, aberrant P2X7R activation contributes to chronic inflammatory disease[16]. Beaucage et al.[17] found that loss of P2X7R increased body and epididymal fat pad weights and reduced total plasma cholesterol levels in mice, suggesting that P2X7R plays a key role in regulating lipid storage and metabolism in vivo. Moreover, Pupovac et al.[18] showed that P2X7R activation induced the rapid shedding of CXCL16. However, the effect of P2X7R activation on lipid metabolism and particularly the modulation of the CXCL16 pathway during chronic inflammation has not been clarified. This study aimed to determine whether inflammation aggravates lipid accumulation in the radial arteries of ESRD patients and to elucidate the possible mechanisms underlying this phenomenon.

The study was approved by the Ethical Committee of Taizhou First People's Hospital, and written informed consent was obtained from all subjects.

Forty-three ESRD patients from the Blood Purification Centre of Taizhou First People's Hospital were selected for this study between February 2014 and February 2015. ESRD patients receiving haemodialysis treatment were included. Patients with acute infections, cancer and/or chronic active hepatitis were excluded. The patients were divided into two groups according to their plasma C-reactive protein (CRP) levels: a control (CRP < 3.0 mg/l) and an inflamed group (CRP ≥ 3.0 mg/l).

Tissues were washed with saline and immediately submerged in 10% buffered formaldehyde after removal from the radial artery during radial-cephalic anastomosis surgery. After fixation, the tissues were embedded in paraffin.

The paraffin-embedded tissues were sectioned and dewaxed. After washing briefly in distilled water, the sections were stained in Harris haematoxylin solution for 8 minutes, differentiated in 1% acid alcohol for 30 seconds, and then counterstained in eosin-phloxine solution for 1 minute. The samples were observed with a light microscope (× 400) after dehydration to transparency and finally sealed with resinene.

After deparaffinization, the sections were rinsed and then stained with Filipin working solution (50 μg/ml) for 30 minutes at room temperature. The sections were finally observed by fluorescence microscopy using an ultraviolet filter set package.

After deparaffinization, the sections were placed in citrate-buffered solution (pH=6.0) and then microwaved for antigen retrieval. Subsequently, the sections were incubated with goat or rabbit anti-human primary antibodies against CXCL16, ADAM10, CXCR6, and P2X7R, followed by staining with the fluorescent secondary antibodies donkey anti-goat Alexa Fluor 488 or donkey anti-rabbit Alexa Fluor 594 (Invitrogen, Carlsbad, CA, USA). After washing, the samples were examined by confocal microscopy (× 400).

Basic clinical data of the patients in the two groups

Basic clinical and biochemical data for the patients

Abbreviation: IQR, interquartile range. CGN = chronic glomerulonephritis; DN = diabetic nephropathy; HYP = hypertension. There was no difference in every index in the inflamed group compared with that in the control, P>0.05.

To explore the potential mechanisms of foam cell formation induced by inflammation, we evaluated the effects of inflammation on the protein expression of the CXCL16 pathway by immunohistochemical and immunofluorescence staining in the radial arteries. As shown in Fig. 3, inflammation significantly increased protein expressions of CXCL16, ADAM10, and CXCR6 in the radial arteries of ESRD patients (Fig. 3A-3D). Moreover, the plasma CRP level was positively correlated with the expression of the CXCL16 protein (Fig. 3E, R=0.824, P<0.05).

Inflammation increased inflammatory cytokine expression and macrophage infiltration. TNF-α, MCP-1, and CD68 protein expressions in the radial arteries were examined by immunohistochemical staining. (A, brown colour, original magnification ×400). The values of semiquantitative analysis of the positive areas are expressed as the mean ± SD from five patients in each group (n=17 for control, n=26 for inflamed group). * P<0.05 vs control (B). 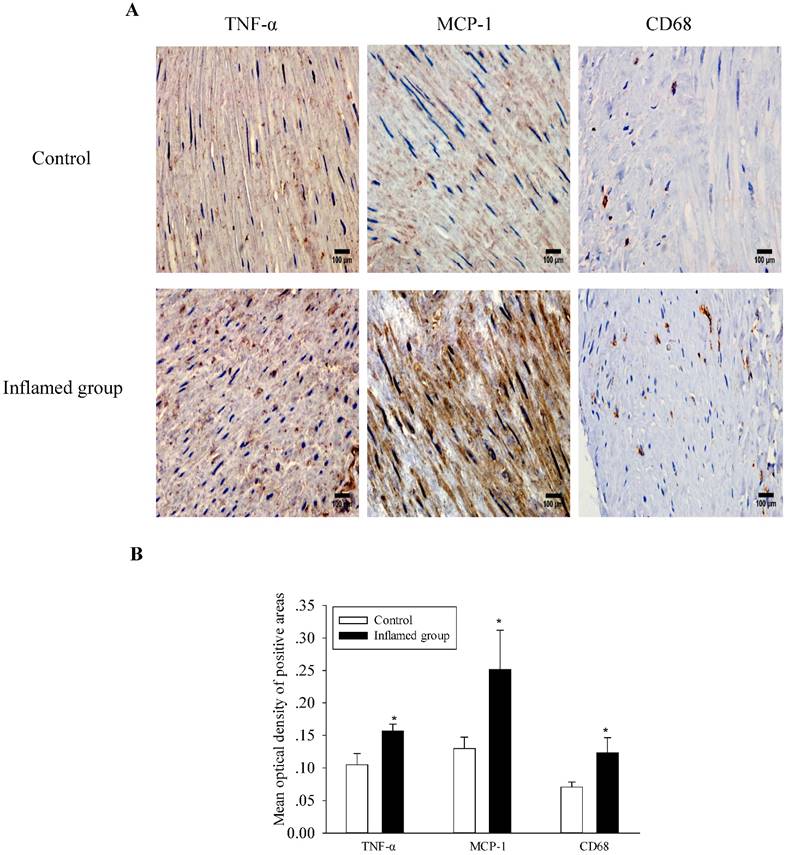 Inflammation induced foam cell formation and increased cholesterol accumulation in the radial arteries. The lipid accumulation in the radial arteries was assessed by haematoxylin-eosin staining (A, original magnification ×400) and Filipin staining (B, original magnification ×200). The values of semiquantitative analysis of the positive areas are expressed as the mean ± SD from five patients in each group (n=17 for control, n=26 for inflamed group). *P<0.05 vs. control (C). 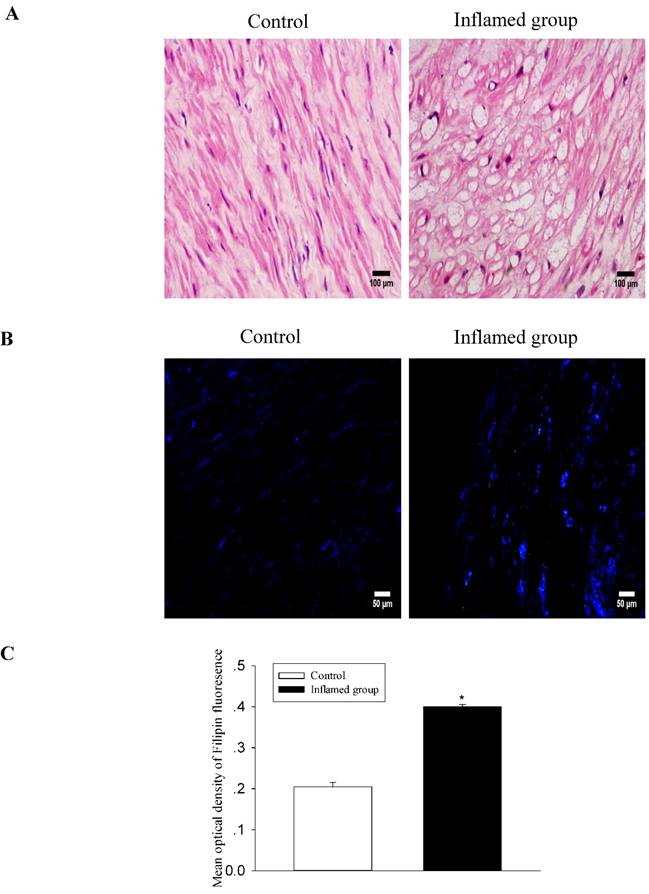 Inflammation increased CXCL16 pathway protein expression in the radial arteries. The protein expressions of CXCL16, ADAM10 and CXCR6 in the radial arteries were measured by immunohistochemical staining (A, brown colour, original magnification ×400) and immunofluorescence staining (C, original magnification ×400). The values of semiquantitative analysis of the positive areas are expressed as the mean ± SD from five patients in each group (n=17 for control, n=26 for inflamed group). * P<0.05 vs control (B, D). Correlation analysis of plasma CRP level with CXCL16 expression (E). 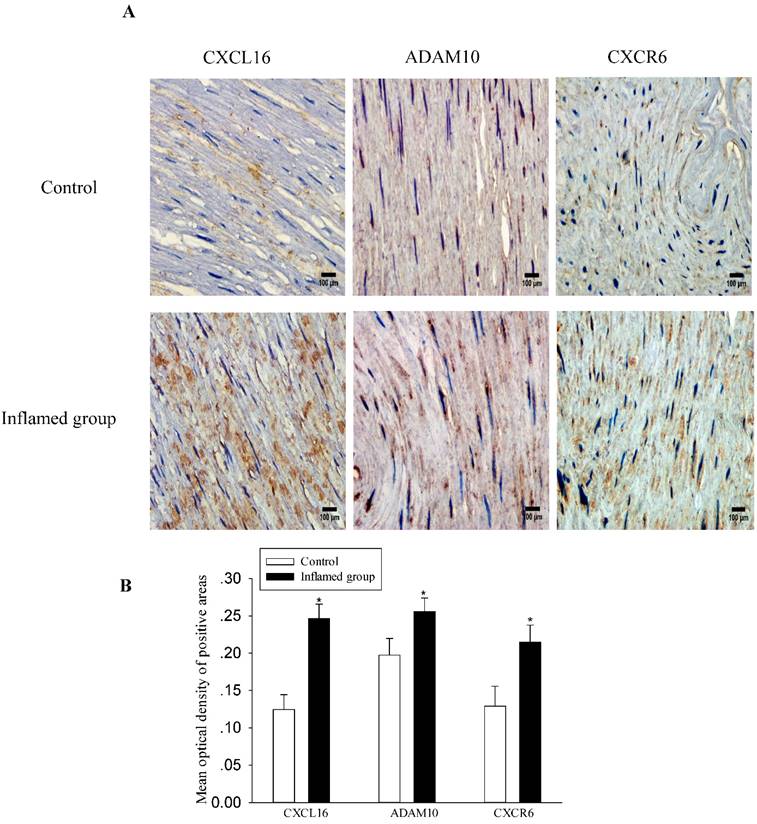 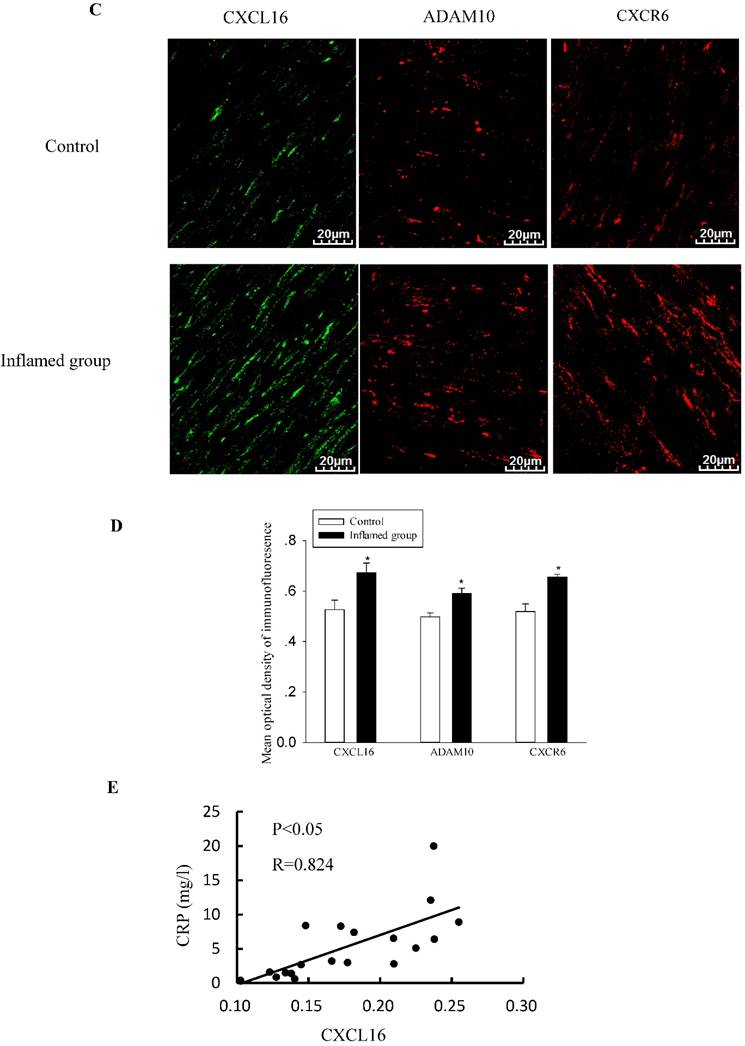 Activation of the purinergic P2X7R has been shown to induce the rapid shedding of CXCL16. Therefore, we evaluated the association between the activation of P2X7R and the CXCL16 pathway. Using immunohistochemical and immunofluorescence staining, we observed that inflammation also significantly increased protein expression of P2X7R (Fig. 4A-4D). To investigate the relationship between CXCL16 and P2X7R expression in the radial arteries, we evaluated the immunohistochemical expressions of the two proteins using Image-Pro Plus software. Spearman's correlation analysis of CXCL16 expression vs. P2X7R revealed a positive correlation (Fig. 4E, R=0.610, P<0.05).

Increased CXCL16 pathway protein expression was positively correlated with P2X7R expression in the radial arteries. The protein expression of P2X7R in the radial arteries was measured by immunohistochemical staining (A, brown colour, original magnification×400) and immunofluorescence staining (C, original magnification ×400). The values of semiquantitative analysis of the positive areas are expressed as the mean ± SD from five patients in each group (n=17 for control, n=26 for inflamed group). * P<0.05 vs control (B, D). Correlation analysis was performed between CXCL16 expression and P2X7R expression (E). 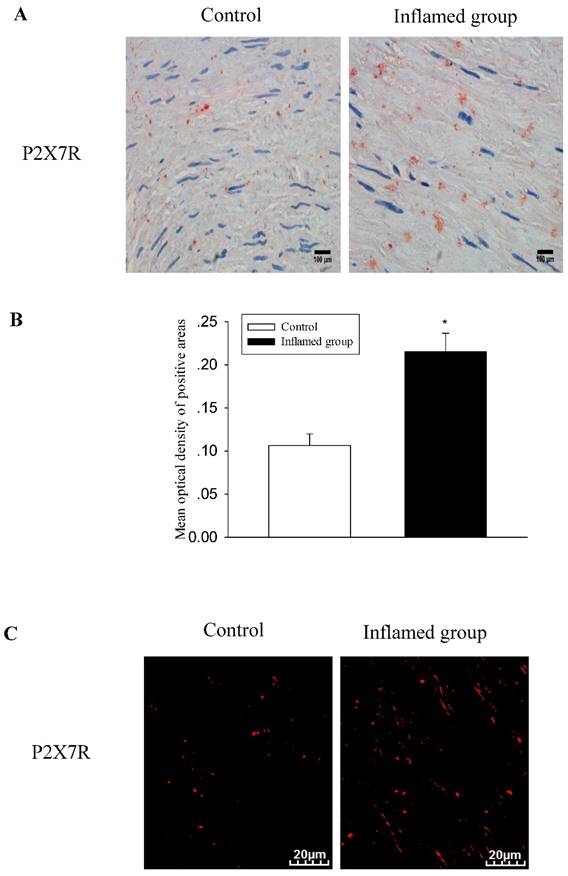 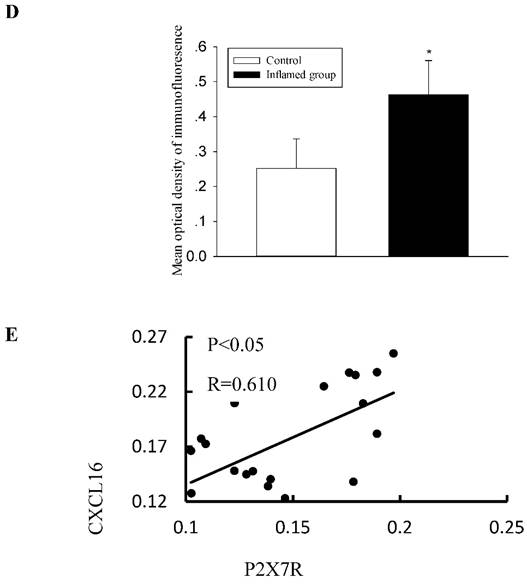 We found that inflammation significantly increased TNF-α and MCP-1 protein expressions in the arteries along with increased cholesterol accumulation and foam cell formation, which was consistent with our previous studies[22]. This report provided further clinical evidence that inflammation contributes to the progression of atherosclerosis in ESRD patients.

It has been reported that CXCL16 was expressed in both human and murine atherosclerotic lesions and promoted atherogenesis[12]. Galkina et al.[23] also found that CXCR6-deficient apolipoprotein E knockout mice had attenuated atherosclerosis. However, Aslanian and Charo observed accelerated atherosclerosis in CXCL16-null LDL receptor-/- mice[24]. Aslanian et al.[25] suggested that a possible explanation for these inconsistent observations may be that CXCL16, which has both chemoattractant and scavenger receptor functions, predominantly performs one of the functions and inhibits the other one. In our study, we found that CXCL16 pathway-related protein expression was significantly upregulated by inflammation, indicating that the CXCL16 pathway may contribute to foam cell formation in the arteries of ESRD patients.

Pupovac et al.[18] reported that P2X7R may be involved in the regulation of CXCL16. Our results also showed that P2X7R expression was significantly increased in the inflamed group compared with that of the controls. Further analysis showed that there was a positive correlation between the expressions of CXCL16 and P2X7R in the arteries of ESRD patients. This suggests that the effect of the CXCL16 pathway on foam cell formation during chronic inflammation may be correlated with P2X7R activation. Piscopiello et al.[26] first reported expression of P2X7R on human vessels and suggested a role for P2X7R in atherosclerosis. Furthermore, Peng et al.[27] recently showed that P2X7R exacerbated atherosclerosis by promoting NLRP3 inflammasome activation. Therefore, P2X7R is believed to participate in lipid accumulation primarily through its inflammatory phenotype. Our study indicated that P2X7R may be involved in lipid metabolism dysfunction by modulating the CXCL16 pathway.

24. Aslanian AM, Charo IF. Targeted disruption of the scavenger receptor and chemokine CXCL16 accelerates atherosclerosis. Circulation. 2006;114(6):583-90