Objectives: Hyperlipidemia is a significant risk factor in the development of atherosclerosis and related diseases which are major health problem in many developed and developing countries that can lead to fatality due to the changes in lifestyle and dietary habits in this modern age.

Methods: In the present study, the Ocimum gratissimum aqueous extract (OGE) was tested for the lowering effect on the serum lipid level of male hamsters on a high-fat (12%) and high-cholesterol (0.2%) diet (HFCD).

Conclusion: Therefore, we suggest that the Ocimum gratissimum aqueous extract may have the potential function of lowering serum lipid in rats.

Hyperlipidemia is a significant risk factor in the development of atherosclerosis and related diseases which are major health problem in many developed and developing countries that can lead to fatality due to the changes in lifestyle and dietary habits in this modern age [1, 2]. The research to date on lipid-lowering therapy for intervention is showing this strategy to be effective in reducing the risk of morbidity [3, 4], but the cost of lipid-lowering drugs is high, and not everyone is responsive to the treatment.

Natural polyphenols applies to simple molecules (phenolic acids) and highly polymerized compounds (tannins) that contribute in the treatment of various diseases of a degenerative nature including hyperlipidemia. Currently there are several thoroughly documented plant-based lipid-lowering polyphenols including those from Ecklonia cava, Ichnocarpus frutescens, Morus alba, Hibiscus sabdariffa, and Red grape [5-9]. Since natural compounds can be used for the prevention of atherosclerosis due to their effect on the reduction of lipid profile in circulating blood and inhibition of LDL-C oxidation [10, 11] the search for more forms of herbal remedy is a line of study for the purposes of contributing to a broader understanding of plant-based compounds as well as for increasing locally available treatment options for more geolocations.

Ocimum gratissimum (OG) is an aromatic small shrub that is widely distributed in tropical and warm temperate geolocations. This plant has been prepared in a variety of forms for consumption as food spice or traditional herb in many Asian and African countries since ancient time [12-19]. Recent studies also demonstrate many therapeutic activities of the OG aqueous extract (OGE), including anti-inflammation [17, 20], analgesic and spasmolytic activities [21], antidiarrheal activity [13], antihyperglycemic activity [22], and improvement of phagocytic function [23]. Notably, this extract has also shown potential properties to protect the user from hazardous bio-organisms, such as anthelminthic or insect-repellant properties, antibacterial, antifungal, and antiviral activity [24-28]. Thus, some of more recent researches focus on its role of immune-modulation [29, 30], cancer chemoprevention [31, 34], and prevention of the vulnerability of immune disorder [30]. Moreover, OGE is well documented for its high concentration of phenolic content and effects on free radicals scavenging, lipid peroxidation inhibition, and cytoprotective activity against oxidative stress [20, 32, 33, 35, 36, 37]. Therefore, in the present study, we evaluated the effects of OGE in preventing hyperlipidemia by using the high fat-cholesterol diet animal model.

48 male golden Syrian hamsters, aged 4 wks, weighing between 75 and 80 g were randomly divided into six experimental groups. They were individually housed in metal cages in an air-conditioned room (22 ± 2 °C, 55 ± 5% humidity), under a 12 h light/12 h dark cycle with free access to food and water. When handled during the 8 week feeding period, all animals used were handled according to the guidelines of the Instituted Animal Care and Use Committee of Chung Shan Medical University (IACUC, CSMC) for the care and use of laboratory animals.

Preparation of diet and supplement

In order to provoke a hyperlipidemic process, the basal Chow (normal diet) was ground by 12% (w/w) coconut oil (high fat diet, HFD) and 0.2 % (w/w) cholesterol was added to obtain the cholesterol-enriched diet (High Fat/cholesterol diet, HFCD). Diary supplement of OGE at doses of 10 mg/kg or 20 mg/kg per day and 1 mg/kg rosuvastatin (Crestor, AstraZeneca Inc., Taipei, Taiwan) per day were treated in each experimental group. These Chow containing lipid was pressed, dried at 37 °C and stored in a dry environment.

Preparation of OGE as indicated in a previous paper [34]. Leaves of Ocimum gratissimum were harvested, washed with distilled water, and then homogenized with distilled water by using polytron. The homogenate was incubated at 95◦C for 1 hour (h) and then filtered through two layers of gauze. The filtrate was centrifuged to remove insoluble pellets (20,000 g for 15 min at 4◦C) and the supernatant (OGE) was collected, lyophilized, and stored at -70◦C until use. The content of polyphenol in OGE was analyzed as indicated in a previous paper [35].

The dose of OGE used in this study (10 mg/Kg or 20 mg/Kg) was chosen based on several our earlier studies [36], including a concentration-response study which determined the antioxidant activity of the extract regarding the lipid peroxidation process and studies shown the suitable pharmacological dose in vivo.

The body weight of each hamster was determined weekly. The food intake of each group was recorded daily and calculated the mean value of each hamster in a week. At the end of 8 weeks, animals were sacrificed by decapitation. Blood samples were collected, and serum separated and stored at -80 °C until analysis.

All values are expressed as mean ± S.D. The significance of differences between the mean of the treated and untreated groups have been calculated by unpaired Student's t-test and P-values less than 0.05 were considered significant.

The mean body weight (g) and daily food intake (g/hamster) were increased by adequate feeding during the experiment period, as shown in Fig. 1 and Fig. 2. All hamsters in each group survived for the entire length of the study. But in the HFCD control group, the hamsters were visually more lethargic at seven or eight weeks.

There were no differences in mean food intake and body weight among the experimental groups during the 8 weeks of the experiment (Fig. 1 & 2).

At 8 weeks, liver image showed all HFCD groups to have significantly reduced redness compared to the ND and HFD group liver images (Fig. 3). Consistently, relative liver weights of all HFCD groups were also significantly higher (Table 1). Interestingly, the OGE and rosuvastatin supplements did not have an effect on the redness or the weight of the liver.

The change of body weight in hamsters treated with high fat/cholesterol and co-treated with different dose of OGE in eight weeks. 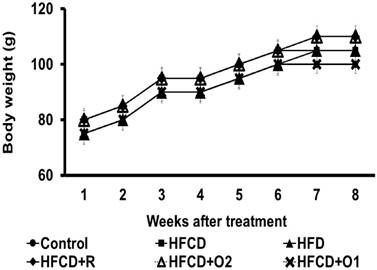 The change of food intake in hamsters treated with high fat/cholesterol and co-treated with different dose of OGE in eight weeks. 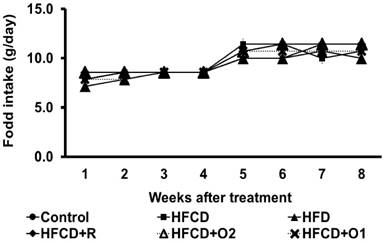 The image of liver in hamsters treated with high fat/cholesterol and co-treated with different dose of OGE at the end of eight weeks. 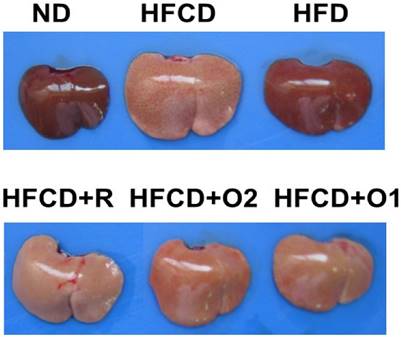 After 8 weeks of administration of OGE in lipid enriched-diet fed Hamsters, both plasma TC and TG were decreased by 49.6% and 74.7% respectively in HFCD+O1 group, as well as by 44.0% and 65.9% respectively in HFCD+O2 group, with respect to HFCD group (Table 2). Rosuvastatin, a HMG-CoA reductase inhibitor, was used as reference drug (1mg/Kg body weight) to compare with OGE. The hypolipidemic effect of rosuvastatin in plasma was effective in TC and TG level which were decreased by 41.2% and 50.4% (Table 1). There were no significant difference in the HDL-C level of all HFCD groups, but LDL-C in HFCD+O1 and HFCD+O2 groups was decreased by 58.7% and 46.7% respectively when compared with HFCD group (Table 2), and the reduction induced by rosuvastatin was 45.1%.

Animal models, such as mouse, rat, golden hamster, guinea pig, rabbit, pigeon and quail are often used for studying hyperlipidemia. Hamster is perhaps the superior model of them not only because their lipid metabolism is similar to that of humans [38, 39], but also that, for hypercholesterolemia studies, the hyperlipidemia content can be easier to maintain by high-fat high-cholesterol induction [40-43].

OGE has a large number of simple phenolic compounds and flavonoids, polyphenolic compounds which accounted for 11.1%, including 0.03% catachin, 0.27% caffeic acid, 0.37% epicatechin and 3.27% rutin [44]. Past studies have indicated that catechins can reduce total cholesterol and LDL, but no significant impact of high-density lipoprotein cholesterol [45]; caffeic acid can inhibit fatty acid synthase, 3-hydroxy-3-methylglutaryl CoA reductase and acyl-CoA:cholesterol acyltransferase activities, while they increased fatty acid beta-oxidation activity and peroxisome proliferator-activated receptors alpha expression in the liver compared to the high-fat group [46]; epicatechin may be an antiaging compound, as evidenced by the improved db/db mouse survival and the favorable changes in a variety of age-related biomarkers, including the development of obesity and hyperglycemia [47] and rutin promoted the excretion of fecal sterols, thereby decreasing absorption of dietary cholesterol and lowering the plasma triglyceride levels of diet-induced hypercholesterolemia [48]. Thus, according to these characteristics and comparing to results of the rosuvastatin effects, we suggested that OGE lowering hypercholesterolemia may be mediated through multiple reasons.

The present study demonstrated that OGE extracted from Ocimum gratissimum may alleviate hypercholesterolemia and hypertriglyceridemia induced by the intake of high-fat and high-cholesterol foods. The OGE decreased the levels of TG, total cholesterol, and LDL-C, and improved HDL-C levels. Although the metabolic mechanisms are not identical between the four flavonoids, the pharmacological effects of OGE should be further investigated in humans. These findings may contribute to the treatment of obesity- and hyperlipidemia-associated diseases in humans.

This work was supported by grants from the Ministry of Science and Technology, Republic of China (MOST 104-2320-B-039-032), as well as in part by Taiwan Ministry of Health and Welfare Clinical Trial and Research Center of Excellence (MOHW105-TDU-B-212-133019).

4. Okere AN, Serra C. Evaluation of the Potential Role of Alirocumab in the Management of Hypercholesterolemia in Patients with High-Risk Cardiovascular Disease. Pharmacotherapy. 2015;35(8):771-779