Background: Cardiomyocyte under hypoxia cause cell death or damage is associated with heart failure. Gap junction, such as connexin 43 play a role in regulation of heart function under hypoxia. Caffeic acid phenethyl ester (CAPE) has been reported as an active component of propolis, has antioxidative, anti-inflammatory antiproliferative and antineoplastic biological properties.

Aims: Connexin 43 appear to have a critical role in heart failure under hypoxia, there has been considerable interest in identifying the candidate component or compound to reduce cell death.

Conclusion: We suggested that reduction of cell death in cardiomyocytes by CAPE is associated with an increase in connexin 43 expression.

Coronary artery disease (CAD) is one of major diseases causing heavy burden of many countries and people around the world [1]. Atherosclerosis is the main cause of CAD and involved in endothelial dysfunction and inflammation [2-4]. Furthermore, previous studies reported that exercise is a secondary prevention of CAD [5], and some reports indicated that exercise seems to be improved the endothelial function [6, 7]. Reactive oxygen species (ROS) and oxidative stress are important feature of cardiovascular diseases including atherosclerosis, hypertension, and congestive failure [8]. Similar result showed that ROS production is increased in mitochondria upon hypoxia, as well as, ischemic preconditioning (IPC) [9-11]. Hypoxia-inducible factor transcription factors (HIF) is upregulated upon hypoxia [12], and triggers the expression of genes involved in oxygen transport, glycolytic metabolism, cell death, cell survival, and other processes that can affect cell survival in ischemia [10].

Caffeic acid phenethyl ester (CAPE) has been reported that it is the major active element of propolis and has an anti- proliferative effect on tumor cells [13, 14]. The antioxidative activities of CAPE have been reported in vitro and in different biological systems [15, 16].

Gap junctions, which are specialized cell-cell contacts between cardiomyocytes in the heart, mediate the electrical coupling of cardiomyocytes and as such dictate the speed and direction of cardiac conduction [17]. Communication of nitric oxide signaling and gap junctions (connexins) are essential for normal vascular function [18]. Moreover, the gap junctions have been reported that participates in mediating various cell fates in vitro [19], however, the effect of hypoxia on human cardiomyocyte is still uncertain. Connexin 43 (Cx43) is a major structural protein found in the gap junctions of the ventricular myocardium and a major determinant of its electrical properties [20], as well as, it also has been considered as a major component of cardiomyocyte gap junctions, which regulate intercellular coupling, conduction velocity, and anisotropy [21, 22]. Additionally, Cx43-formed channels are involved in ischemia/reperfusion injury and ischemic preconditioning's protection in vitro [23], however, the role of Cx43 on human cardiomyocyte under hypoxia is still unclear. Previous report demonstrated that Cx43 is highly expressed in cardiomyocytes and is involved in IPC [23, 24]. Isolated cardiomyocytes from wild type mice can protect of IPC [25], but form heterozygous Cx43-deficient mice cannot [26]. An additional role of Cx43 in the mitochondria is considered as a critical role in the pathophysiology of myocardial ischaemia-reperfusion injury and regulation of reactive oxygen species during IPC [27]. Interestingly, replacement of Cx43 by Cx32 attenuates aortic endothelium-derived hyperpolarizing factor (AEDH)-mediated relaxation in mice [28]. Therefore, the role of Cx43 in regulation of mitochondrial function of cardiomyocytes under ischaemia or hypoxia is very important for us to know.

with 0.05 ml/ml fetal calf serum, 0.5 ng/ml epidermal growth factor, 2 ng/ml basic fibroblast growth factor, and 5 µg/ml insulin in a 5% CO2/95% air atmosphere. The culture medium was replaced every 2 days. Once the cells reached 70-80% confluence, they were trypsinized and seeded on 6-well plastic dishes for the following experiments. Passage 3-9 HCMs were used in the experiment.

Hypoxic conditions were assessed using a method previously described [29] with some modifications. Briefly, cells were grown on 6 well plastic dishes, in a hypoxia chamber and equilibrating for 30 minutes with humidified gas containing 1 % oxygen, 5 % CO2 and 94 % nitrogen (Hypoxic incubator APM-30D, Astec., Tokyo). The cell lines were maintained under hypoxic conditions for various time courses. Control cells were grown in normal oxygen conditions for the same duration.

The analysis was performed using the LDH Cytotoxicity Assay Kit (Pierce IL, USA) according to the manufacturer's instructions. Statistical significance for all the experiments was determined by performing the t test. Error bars are used to indicate the standard errors of the means and p values of < 0.01 were considered significant.

Effect of hypoxia on connexin 43 and cell LDH release

To study the effect of hypoxia on gap junction in human cardiomyocytes, we detected the expressions of connexin 43 (Cx43) and connexin 40 (Cx40) by western blotting under hypoxia. Results showed that hypoxia caused Cx43 down-regulation but no effect on Cx40 (Fig. 1A and B). Moreover, LDH is a biomarker for cell cytotoxicity and cytolysis. Loss of intracellular LDH and its release into the culture medium has been considered as an indicator of irreversible cell death via cell membrane damage [30]. In this study, results showed that hypoxia caused LDH significantly release (Fig. 1C).

Effect of hypoxia on gap junction expression and LDH release. Cells were incubated under hypoxia or normoxia treatment for 24h (western blotting) and 48hh (LDH). (A) Detection of connexin 43, 40, and GAPDH by western blotting with specific antibody. (B) The quantitative results on the level of specific protein (connexin 43) by ImageJ. All data are presented as the mean ± S.E.M. * p <0.05 as compared with normoxia (N). (C) Detection of LDH release. N: normoxia; H: hypoxia. 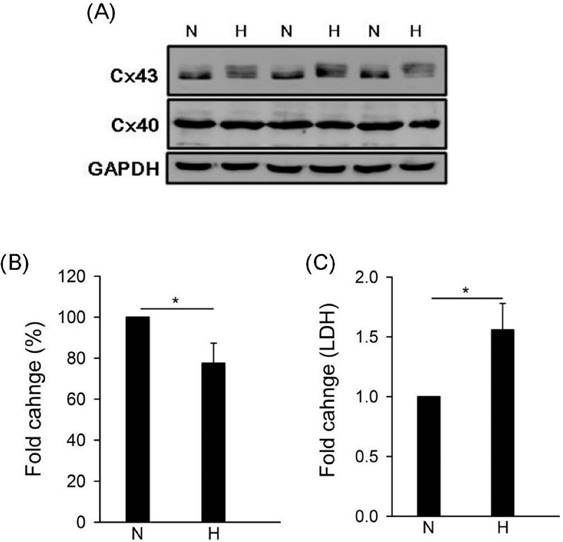 Effect of CAPE on connexin 43 expression (arrow) under hypoxia. Cells were incubated in presence or absence of 30 μM CAPE and under hypoxia or normoxia treatment for 24h. GAPDH is an internal control.

Effect of CAPE on cell survival under hypoxia. Cells were incubated in presence or absence of 30 μM CAPE and under hypoxia or normoxia treatment for 48h. (A) Morphological images were observed in the indicated conditions. (B) The quantitative results on the cell numbers. All data are presented as the mean ± S.E.M. * p <0.05; ** p <0.01 as compared with the corresponding group. N: Normoxia; N+C: Normoxia + 30 μM CAPE; H: Hypoxia; H+C: Hypoxia + 30 μM CAPE. 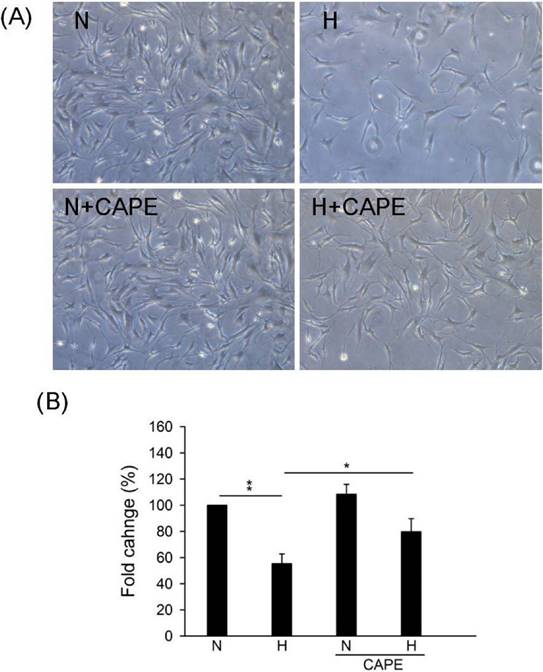 Oxidative stress-induced apoptotic signaling can cause several pathological conditions, including the development and progression of heart disease, which are a consequence of the increases ROS or decreases in antioxidants, as well as a disruption in the intracellular redox homeostasis [32-34]. Our previous study demonstrated that CAPE reverses hypoxia-induced LDH release and cell death in human cardiomyocytes, as well as ROS scavenger, Tiron also prevents H2O2 induces LDH release and cytotoxicity [31]. However, the role of CAPE on gap junction in human cardiomyocytes is still unclear. Therefore, we detected the expression of connexin 43 under hypoxia in the absence or presence of CAPE. Results showed that CAPE prevented hypoxia-caused connexin 43 down-regulation, however, hypoxia did not alter connexin 40 expression. According to previous reports, connexin 43 plays a more critical role than other connexins in the atrial and ventricular working myocardium and in the distal Purkinje system [35, 36]. Furthermore, connexin43 has been reported that it located in the nuclear membrane and in subsarcolemmal mitochondria [37]. Boengler et al. reported that ischemic preconditioning causes increasing in levels of mitochondrial connexin43 [38]. Mitochondria are a major source of ROS, which in excessive amounts induce oxidative stress and promote cell death under hypoxic conditions. However, at physiological levels, ROS function as “redox messengers” in intracellular signaling [39]. Therefore, we suggested that CAPE controls cardiomyocytes death or survival via connexin 43-ROS dependent pathway, however, we need more evidence to verify it.

None of the authors has any potential financial competing interest related to this paper.