Backgroud: Increasing evidence suggests the involvement of chronic inflammation in the progression of prostate cancer, and prostaglandin-endoperoxide synthase 2 (PTGS2), also known as cyclooxygenase-2, catalyzes the rate-limiting steps of the pathway. We hypothesized that genetic variants of PTGS2 can influence the outcome of prostate cancer patients.

Results: One SNP, rs4648302, was associated with disease recurrence. Five-year recurrence-free survival rate increased according to the number of variant alleles inherited (55.6%, 70.7%, and 100.0% for patients with different genotypes; P = 0.037), and the effect was maintained in multivariable analysis. Public dataset analyses also suggested that PTGS2 expression was correlated with prostate cancer prognosis.

Conclusion: Our results indicated that PTGS2 could be a potential prognostic marker to improve the prediction of disease recurrence in prostate cancer patients.

Prostate cancer is the most commonly diagnosed cancer in the western world, and it has become a serious public health issue in Taiwan with incidence rate increasing over the past two decades [1]. Many men diagnosed with prostate cancer have early-stage disease, and radical prostatectomy (RP) is one of the most effective means of curing the localized cancer. Although RP provides durable cancer control with excellent quality of life, a significant rise in prostate-specific antigen (PSA) levels are observed in many patients, indicating biochemical recurrence (BCR) [2]. Understanding the molecular mechanisms underlying prostate cancer recurrence could facilitate the discovery of novel biomarkers and therapeutic strategies to control this malignancy.

Studies have suggested chronic inflammation contributes to a variety of malignancies, including that of prostate cancer [3]. Prostaglandin-endoperoxide synthase 2 (PTGS2, also known as cyclooxygenase-2, COX-2) catalyzes the rate-limiting steps in prostaglandin biosynthesis, and its expression is controlled by inflammatory signaling at both transcriptional and post-transcriptional levels [4]. Prostaglandins could interact with their receptors to transduce downstream signaling, which could promote cancer cell proliferation, survival, angiogenesis, and metastasis [5].

We recruited 458 localized prostate cancer patients who underwent RP as initial therapy at the National Taiwan University, Kaohsiung Medical University, E-Da, and Kaohsiung Veterans General hospitals, as described previously [10-13]. Demographic, clinical, and follow-up data were obtained from the medical records. BCR was defined as two consecutive PSA values of at least 0.2 ng/mL [14, 15]. The present study was approved by the Institutional Review Board of Kaohsiung Medical University Hospital. Written informed consent was obtained from each patient, and the study was carried out in accordance with the approved guidelines.

Basic characteristics of 458 localized prostate cancer patients who received RP are described in Table S1. The median age of the patients was 66 years, and the 5-year BCR-free survival rate was 56.5%. Disease recurred in 184 (40.2%) patients during the median follow-up of 54 months. PSA at diagnosis, pathologic Gleason score, and pathologic stage were significantly associated with BCR (P ≤ 0.001).

Genomic DNA was extracted from the peripheral blood with QIAamp DNA Blood Maxi Kit (Qiagen, Valencia, CA, USA) according to the manufacturer's protocol, and was stored until use. We utilized a haplotype-tagging SNP method to cover most of the haplotype diversity in the PTGS2 gene region. Haplotype-tagging SNPs were selected using the Haploview Tagger with pairwise tagging [16], a minimum r2 of 0.8, and a minor-allele frequency ≥ 2.5% on the basis of the data on 1000 genomes from Han Chinese in Beijing and Southern Han Chinese [17]. We identified six SNPs, which were genotyped at the National Center for Genome Medicine, Taiwan, using the Agena Bioscience MassARRAY iPLEX technology. For quality control, we randomly selected 10 samples as duplicates, and the concordance rate was 100% for all SNPs assayed. The average call rate was 99.2%, but rs5275 with a Hardy-Weinberg equilibrium < 0.05 was removed. Thus, five SNPs were included for further statistical analyses.

Patient characteristics were summarized as either the numbers and percentages of patients, or the median and interquartile range of values. Individual SNPs were initially assessed using the Kaplan-Meier analysis with log-rank test for the three genetic models of inheritance: dominant (common homozygotes versus variant allele carrying genotypes), recessive (common allele carrying genotypes versus variant homozygotes), and additive (P for trend). Only dominant and additive models were considered if the variant homozygotes were observed in < 5% of the study population. Cox proportional hazards regression analyses were used to assess the effect of each SNP on BCR, with or without adjusting for known prognostic factors, including age, PSA at diagnosis, pathologic Gleason score, and stage, as previously described [11]. The Statistical Package for the Social Sciences software, version 22.0.0 (IBM, Armonk, NY, USA), was used for other statistical analyses. A two-sided P value of < 0.05 was considered statistically significant.

SNPinfo [18] was used to identify the regulatory potential of the SNP. Publicly available datasets [19, 20] were used to analyze PTGS2 expression and prostate cancer progression.

Bioinformatic analysis revealed the rs4648302 G to T transition gained a new microRNA binding site and thus could decrease PTGS2 expression. We performed an in silico evaluation of PTGS2 gene expression in relation to prostate cancer progression using publicly available datasets. When the patients were grouped based on the values higher or lower than the median value of gene expression, we observed a trend toward more favorable outcome for cancers with lower PTGS2 expression in two independent prostate cancer microarray datasets (Figures 2A and B). In a combined analysis, lower PTGS2 expression was significantly associated with a reduced risk of disease progression (P = 0.012, Figure 2C).

Kaplan-Meier analysis of BCR-free survival based on PTGS2 rs4648302 genotypes. Numbers in parentheses indicate the number of patients. 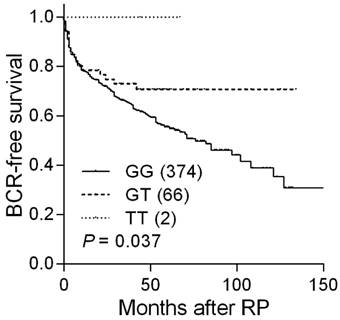 Kaplan-Meier analysis of progression-free survival based on PTGS2 expression. Expression of PTGS2 mRNA is compared with progression-free survival in datasets from (A) Nakagawa et al., (B) Sboner et al., and (C) in combined analysis. Patients were divided into high and low groups according to the median mRNA expression values of PTGS2. Numbers in parentheses indicate the number of patients.

Univariate and multivariate analyses of PTGS2 rs4648302 and BCR after RP.

It has been challenging to predict BCR after RP for patients with high-risk prostate cancer. Our study was designed specifically to assess the possibility that genetic variants in PTGS2 could predict disease progression. We found that PTGS2 rs4648302 confers an independent risk of prostate cancer recurrence compared with commonly used clinicopathological factors. Moreover, patients with higher PTGS2 expression levels showed a poorer survival, further confirmed the functional relevance of PTGS2 in prostate cancer progression.

rs4648302 locates in the 3'-untranslated region of PTGS2. According to the functional prediction of SNPinfo [18], the favorable allele T, creates a putative microRNA binding site for miR-154, which might result in lower PTGS2 expression. Since PTGS2 is probably oncogenic (Figure 2), the rs4648302 G to T transition might attenuate prostate cancer progression, which is consistent with the results of our association study that individuals carrying the rs4648302 T allele had a decreased risk of BCR (Table 2 and Figure 1). It has also been demonstrated that miR-154 expression level is downregulated in prostate cancer, and overexpression of miR-154 can significantly reduce prostate cancer cell migration and invasion [21, 22]. However, future functional studies are required to gain more insights into the mechanism underlying the observed association with prostate cancer recurrence.

This present study has several strengths. First, we used a haplotype-tagging approach and systematically evaluated common SNPs within the PTGS2. Second, this is the first study to date to identify the effects of PTGS2 SNPs on treatment outcomes for prostate cancer patients after RP. In addition, the available clinical information enables us to adjust for potential confounding factors. However, our findings in Taiwanese might not be generalizable to other ethnic populations. Given the multiple comparison, there is a possibility that the significant results might be false discoveries. Additional validations with larger sample sizes are needed to confirm our findings.

In conclusion, we have identified PTGS2 rs4648302 as a prognostic predictor for prostate cancer. This variant might alter microRNA binding, and thus influence PTGS2 expression and prostate cancer progression. Clinical studies have suggested that selective PTGS2 inhibitors could reduce cancer risk [23, 24]. If validated, such knowledge could ultimately lead to targeted therapies for a subset of high-risk patients harboring this inherited PTGS2 variant.