Hair follicles display periodic growth. Wnt signaling is a critical regulator for hair follicle regeneration. Previously, we reported that Wnt5a inhibits the telogen-to-anagen transition of hair follicles, but the mechanism by which this process occurs has not yet been reported. Here, we determined the expression patterns of Wnt signaling pathway molecules by quantitative reverse transcription polymerase chain reaction, western blot, and immunohistochemistry and found that β-catenin signaling was suppressed by Wnt5a. We then compared the phenotypes and expression patterns following β-catenin knockdown and Wnt5a overexpression during hair follicle regeneration induced by hair depilation and observed similar patterns. In addition, we performed a rescue experiment in the JB6 cell line and found that the inhibitory effect of Wnt5a on cell proliferation could be rescued by the addition of Wnt3a. Our data reveal that Wnt5a suppresses the activation of β-catenin signaling during hair follicle regeneration.

Hair follicles are one of the accessory mini-organs of the skin. Hair follicles begin to form during embryonic development and finish morphogenesis postnatally. Over the lifetime of an individual, hair follicles undergo periodic growth [1]. The hair cycle consists of anagen, catagen and telogen phases. Dysfunction of the hair cycle results in hair follicle-associated diseases, including hair loss and hirsutism [2]. Many signaling pathways are reported to play roles in the regulation of the hair cycle, including the fibroblast growth factor [3], bone morphogenetic proteins [4], and Wnt (wingless-type mouse mammary tumor virus integration site) pathways [5].

Skin tissue samples were collected from C57BL/6 mice at 8 weeks (telogen), 7 days after hair depilation at 8 weeks (middle anagen), or 7 days after hair depilation and intradermal injection of AdWnt5a at 8 weeks (prolonged telogen). Total RNA was extracted, the cDNA was synthesized with ReverTra Ace-α- kit (Toyobo, Japan), and qRT-PCR amplification was performed using a SuperGreen PCR kit II (CapitalBio, China) according to the manufacturer's protocol. Differences between measurements were evaluated using Student's t-test. For all statistical tests, a P-value of < 0.05 was defined to be statistically significant.

JB6 cells were cultured in DMEM (Hyclone, USA) containing 10% FBS (Gibco, USA). For cell cycle analysis, JB6 cells were plated onto 6-well plate at a confluence of 70% to 80%. After 6 hours, Wnt5a protein (4 μg, R&D, USA), Wnt3a protein (1 μg, R&D, USA) or control dissolvent was added to the culture medium. Cells were harvested after 24 hours, and cell cycles were analyzed under a fluorescence-activated cell sorter according to standard protocols.

JB6 cells were plated onto 96-well plates. Six hours later, Wnt5a protein (0.2 μg, R&D, USA), Wnt3a protein (0.1 μg, R&D, USA) or control dissolvent were added to the culture medium. Twenty-four hours later, 20 μl of 5 mg/ml MTT was added to each well. Four hours later, the culture medium was aspirated out, 150 μl DMSO (Invitrogen, USA) was added, and the plates were shaken for 10 minutes. The absorbance value was determined by an enzyme-linked immunoassay at 490 nm. Significant differences were evaluated using a t-test, and p< 0.05 was considered statistically significant.

Wnt5a suppresses the expression of β-catenin

When AdSimBC was injected intradermally into the hair-depilation induced skin, hair follicle regeneration was prolonged by approximately 40 days (Fig. 4a). At 7 days after AdSimBC injection, HE staining demonstrated that the entire injected area remained in telogen, whereas the adjacent area had already entered anagen (Fig. 4b). At 50 days after AdSimBC injection, the hair follicles in the injected area were normal in morphology (Fig. 4a), and all four hair types were found among the regenerated hairs (Fig. 4c-4e). These data demonstrate that the effect durations of AdSimBC can last for about 40 days and confirm that canonical Wnt signaling is an activator of hair follicle regeneration. 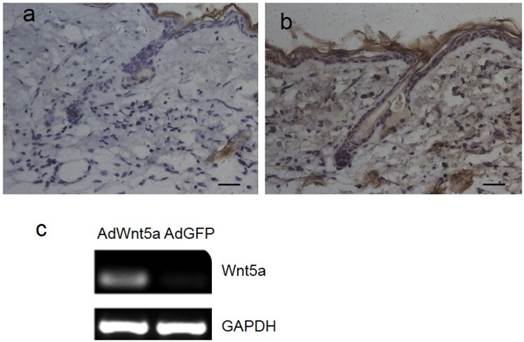 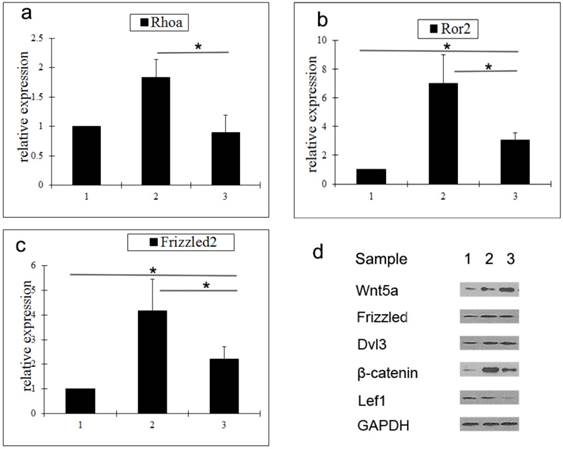 Protein expressions of β-catenin, Frizzled and Ki67 in hair follicles after Wnt5a overexpression. C57 mice in telogen phase were depilated and injected with AdGFP (a-c) or AdWnt5a (d-f). Seven days after injection, the expressions of β-catenin (a, d), Frizzled (b, e) and Ki67 (c, f) were determined by immunohistochemistry. Arrowheads show the areas staining positive for expression of the indicated proteins. Scale bar= 10 μm. 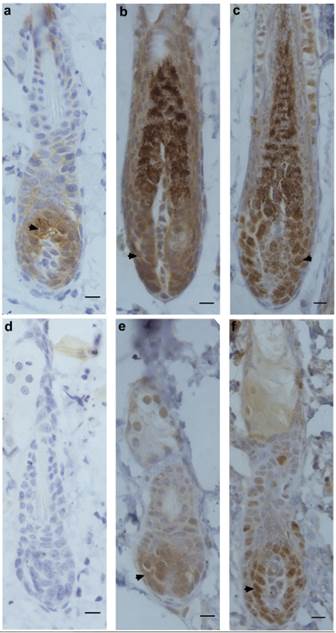 Because the suppression of hair follicle regeneration by AdSimBC in depilated skin is similar to that observed upon AdWnt5a injection, we determined the expression patterns of Wnt/β-catenin signaling molecules (β-catenin, Dsh, Lef1), a proliferation marker (Ki67) and a hair follicle structure marker (AE15). No expression of Wnt/β-catenin signaling molecules or proliferation marker was observed in either AdSimBC- or AdWnt5a-injected skin (Fig. 5). Neither AdSimBC- nor AdWnt5a-injected skin had detectable AE15 expression (Fig. 5), which demonstrated that no new hair follicles were formed in these two groups.

Wnt3a can rescue the suppression of cell proliferation by Wnt5a 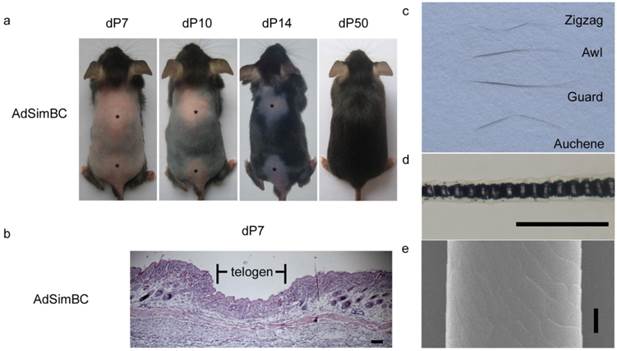 Comparison of the expression patterns of select markers between AdSimBC-injected skin and AdWnt5a-injected skin. Telogen C57 mice were depilated and injected intradermally with AdGFP (control), AdSimBC or AdWnt5a. Ten days later, the expressions of Dsh (a), β-catenin (b), Lef1 (c), AE15 (d), and Ki67 (e) were determined by immunohistochemistry. Brown color shows the areas staining positive for expression of the indicated protein. Scale bar=100 μm. 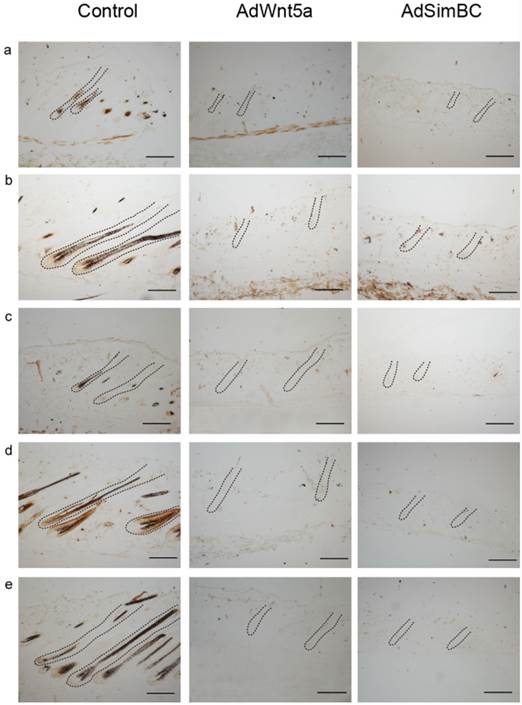 Effects of Wnt5a and Wnt3a on the cell proliferation of JB6 cells. Cultured JB6 cells were treated with the indicated Wnt proteins, and the proliferation statuses were determined by FACS (a-e) and MTT (f) assays. (a) Control group. (b) Wnt5a group. (c) Wnt5a+Wnt3a group. (d) Wnt3a group. (e) Quantification of percentage of S phase cells in (a) to (d). (f) Quantification of MTT results. Values are expressed as the means ± SD (n=3). *P<0.05. 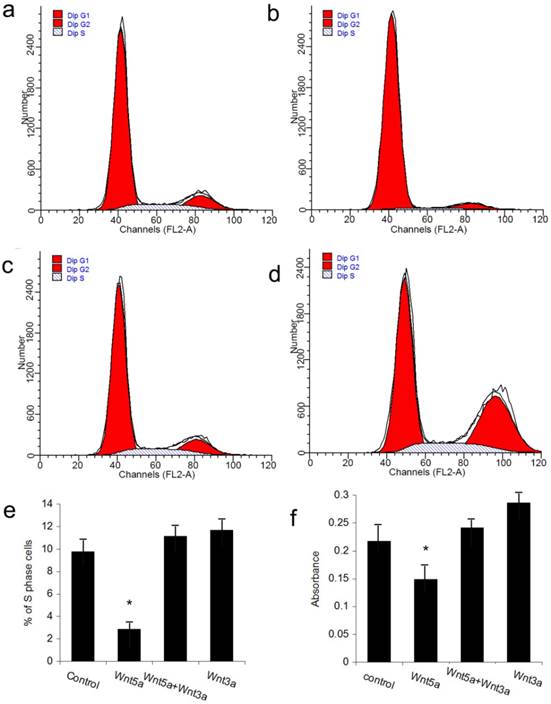 Wnt5a may signal through a non-canonical Wnt signaling pathway, possibly through Wnt/PCP signaling or Wnt-cGMP/Ca2+ signaling [6]. It is reported that Wnt5a regulates proliferation and apoptosis of some cells, including keratinocytes, dental follicle cells [16, 17]. Wnt5a could down-regulate β-catenin and Snail in human retinal pigment epithelial cells [18]. To reveal the mechanism by which Wnt5a suppresses hair follicle regeneration, we determined the expression patterns of several Wnt signaling related molecules. Rhoa is a small GTPase protein of the Rho family that is primarily associated with cytoskeleton regulation. Ror2 is a tyrosine-protein kinase transmembrane receptor. Frizzled2 is a Wnt protein receptor. All of these proteins have been reported to be involved with non-canonical Wnt signaling pathways. Our expression data imply that Wnt5a may suppress the expression of these molecules. Moreover, our published data [13] showed that the expression level of Rac2 increased markedly after Wnt5a treatment. Rac, a member of the small GTPase superfamily, is involved in the PCP signaling pathway that is activated by Wnt5a. Knockout of β-catenin or Lef1 has been reported to suppress hair follicle regeneration [19, 20]. If Wnt5a does suppress the activation of the Wnt/β-catenin pathway, overexpression of Wnt5a should have the same or similar phenotype and expression pattern as knockdown of β-catenin. Our data prove that this is the case in hair follicle regeneration.

During morphogenesis, hair follicles originate from the basal plate, which also generates the epidermis of the skin. The JB6 cell line was derived from primary cultures of neonatal BALB/c epidermal cells. Due to the lack of a hair follicle cell line, we performed the rescue experiment in the JB6 cell line. Both FACS and MTT assays revealed that Wnt3a could rescue the suppressive effect of Wnt5a on cell proliferation. However, the same dose of Wnt3a when administered alone did not promote the proliferation of JB6 cells. Thus, the canonical Wnt signaling pathway may have other effects on JB6 cells. A recent study reported that the prolonged overexpression of Wnt10b, another canonical Wnt ligand, induced the transformation of JB6 cells [21]. Wnt3a has also been reported to inhibit the proliferation of melanocyte cells [22]; thus, Wnt3a may also induce the transformation of JB6 cells. This possibility should be tested in future studies.

We thank Dr. Tong-Chuan He at Chicago University for adenovirus production and technical assistance. We thank Prof. Cheng-Ming Chuong at the University of Southern California for advice regarding this project. This study was supported by the National Natural Science Foundation of China (No. 31100993) and the Municipal Natural Science Foundation of Chongqing (No. cstc2015jcyjA1219).

The authors declare no competing interests.