Introduction: The mechanism of EphB4/ephrinB2 in the resistance of chronic myelogenous leukemia to imatinib keeps unknown.

Results: The EphB4 receptor was over-expressed in blast crisis patients compared to chronic phase patients. The level of EphB4 receptor expression was associated with a complete cytogenetic response within 12 months. Enhanced expression of the EphB4 receptor was detected in the K562-R cells. EphB4 knockdown inhibited cell migration ability and restored sensitivity to imatinib in vitro and in vivo. Restored sensitivity to imatinib was observed in K562-R cells, along with increased levels of phospho-EphB4 and decreased phosphorylation levels of RhoA, Rac1, and Cdc42.

Imatinib (IM) is used as the standard chemotherapy drug for many chronic myelogenous leukemia (CML) patients and can significantly prolong a patient's survival. However, IM drug resistance occurs in 20-30% of patients and results in a progressive outcome. Although second generation kinase inhibitors can overcome this BCR-ABL-dependent resistance, their effects are limited [1]. TKI-resistant CML is more complex than the original spontaneous IM resistance. BCR-ABL-dependence also contributes to resistance [2].

Signal transduction through the erythropoietin producing hepatoma (Eph) amplified sequence receptors binding to their cell-surface ephrin ligands and have been implicated in hematopoiesis and the growth of various cancer cells [3].The binding of an ephrin ligand to its respective Eph receptor activates a bi-directional signal (as well as cell adhesion), thereby affecting cell proliferation and cell-fate determination in a number of key biological processes, including angiogenesis and hematopoiesis [4-6]. The Eph receptors (which are phosphorylated on two conserved tyrosines) enable efficient kinase activation in the juxta-membrane domain, which modulates many adaptors and effectors including non-receptor tyrosine kinases of the Src and Abl families (particularly Rho and Ras family GTPases). This activation may also regulate the molecular expression of other receptor tyrosine kinase (RTK)family members [5, 7, 8]. These crucial regulators assist most RTK families in controlling cell growth and migration, which ph receptors use to inhibit cell proliferation and survival.

Some studies have indicated that ephrinB2-Fc activated EphB4 receptors could decrease cell viability and suppress cell invasion in breast and colon cancer [9-11]. Previous reports have also found that increased EphB4 expression levels are related to poor prognoses in breast cancer [12]. Recent findings have shown that EphB4/ephrinB2 signaling may be involved in the pathology of leukemia [3], and over expression of EphB4 has been associated with drug resistance in Ph+ acute lymphocytic leukemia (ALL) [13]. It also has been shown that EphB4 promotes cell adhesion-mediated drug resistance by interacting with the extracellular matrix and modulating Rho family members.

Our previous study has established the EphB4 knockdown and IM resistant CML cell line (K562-R-EphB4-sh) and found that homoharringtonine overcomes imatinib resistance by blocking the EphB4/RhoA pathway in K562-R [14]. To determine the role and mechanism of EphB4/ephrinB2 in IM resistance to CML, we investigated the role of EphB4 in IM resistant CML, and we further explored the related molecules and the down-stream signaling pathway of EphB4/ephrinB2.

Clinical samples were taken from the bone marrow of chronic myelogenous leukemia chronic phase (CML-CP) patients (n=22), as well as chronic myelogenous leukemia blast crisis (CML-BC) patients (n=6) to produce bone marrow (BM) cells in the first diagnosis. All of the patients had received IM therapy, and CML-BC patients were resistant to imatinib. The clinical diagnosis of CML was evaluated by the National Comprehensive Cancer Network. All patients agreed to provide their written informed consent for the use of their samples. The protocol was approved by the Ethics Committee of the Nanfang Hospital, Southern Medical University.

Total RNA of patient samples and cell lines was extracted with the Trizol reagent (Invitrogen, Carlsbad, CA, USA) and stored at -80˚C. All RT-PCR primers were designed with Primer 5.0 and listed below:

K562, K562-R-EphB4-sh, and K562-R cells were collected, washed twice, and incubated with PE Annexin V in a buffer containing 7-AAD for 15 min at room temperature (BD Pharminigen, San Diego, CA, USA.). Cells were then examined by flow cytometry. Cells (5×105 cells/ml) were seeded in 24-well plates and cultured in l ml media for 24 hours. The exponentially growing cells were then incubated with IM (0.5 µM). Cells were pelleted and then fixed for 1 h at 4˚C by adding 500 µL of fixation solution. The fixed cells were pelleted and analyzed by flow cytometry (FACS)(BD Pharminigen).

Cell migration was detected with commercial transwell assay (Corning, Tewksbury, MA, USA). Briefly, 10% (v/v) fetal calf serum 1640-mediumwas added to the lower chamber, and 3×104cells were suspended in serum-free media and added to the upper chamber following 4 h incubation supplied with 5% CO2 at room temperature. Then, the upper chamber was detached from the assay, and the cells were collected from the bottom chamber. Total number of cells was counted at three randomly selected fields.

Cell viability of K562, K562-R-phB4-sh, and K562-R cells were measured using a cell counting kit-8 (CCK-8) (Sigma). 5×104 cells/well were seeding into 96-well micro-plate containing in 100 µl media and followed a series of concentrations of IM (0-8 µM) treatment. After 24 hours of culture, 10 µl CCK-8 solution was added into each well and incubated for 2 hours at room temperature. Cell viability was detected using a microplate reader (Bio-rad 680, Hercules, CA, USA) at 450nm optical density (OD) and quantified as [(OD treated -OD blank)/(ODcontrol-OD blank]× 100%. The IC50 value of each cell line was calculated from the cell inhibition rate.

K562 parental cells, K562-R-EphB4-sh, and K562-R cells (1x107/ml) were subcutaneously injected into BALB/C nude mice, (female nude mice 4-5 weeks of age; SLRC laboratory animal center, China) to build xenograft models. On day 30 after implantation, tumors reached an average size of over 1000 mm. As determined by histopathology, green fluorescent protein (GFP) positive cells in the xenograft tumor were found in the K562-R-EphB4-sh cell group. Then, all nude mice received an oral standard-dose of IM (91 µg/g daily for 30 days) treatment. All animal experiments were conducted according to the policy and procedures provided by the Committee for Animal Research and Ethics and were approved by the Ethics Committee of Nanfang Hospital, Southern Medical University.

Data were presented with the mean ± standard deviation (SD) from three independent experiments. SPSS13.0 statistical software (SPSS Inc., Chicago, IL, USA) was used for statistical analysis. Paired t test or LSD method were used for the comparison between groups and within groups. Pearson correlation coefficients were performed to assess the correlation between EphB4 mRNA and BCR-ABL transcript levels. P < 0.05 was considered to be statistically significant.

Regulation of EphB4 on cell migration and viability

Previous publications have shown that EphB4 regulates the activity of the actin cytoskeleton. Thus, we tested whether EphB4 expression levels influenced K562 cell migration. The results demonstrate that cell migration in K562-R-EphB4-sh was significantly decreased (57.4±3.01) compared with K562-R, but it was not significantly statistically different from K562 (Fig. 2A, 2B and 2C). This indicates that EphB4 knockdown impaired the migration of K562-R cells in vitro. Furthermore, we compared K562, K562-R, and K562-R-EphB4-sh in terms of cell viability, apoptosis rate, and cell cycle. The cell viability of K562-R-EphB4-sh cells was less than K562-R, but it was stronger than K562 after treatment with different concentrations of the IM resistant medium (Fig. 2D).

Regulation of EphB4 on cell apoptosis and cell cycle distribution 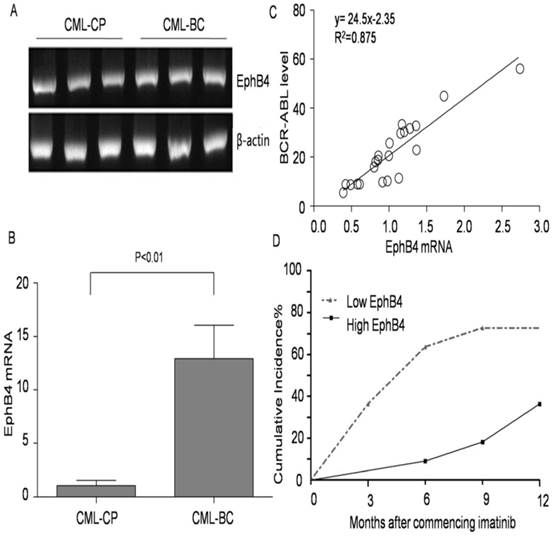 Regulation of EphB4 on cell migration and viability. A and B. Effects of knockdown of EphB4 on the migration of K562-R cells. Representative images of the migrated cells in the transwell assays. C. Comparison of cell migration rate to the control values of K562-R cells, measured with in a transwell assay. D. Comparison of cell viability of K562/K562-R/K562-R-EphB4-sh in different IM concentrations by the CCK8 assay (* P<0.01, compared to K562; ^ P<0.01, compared to K562-R). 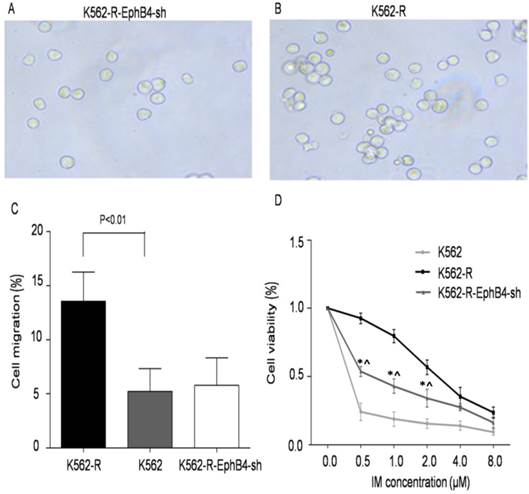 The EphB4 receptor changes were identified by stimulating the ephrinB2 ligand. K562-R cells treated with EphrinB2-Fc (l, 2 and 4µg/ml), IgG-Fc (0.4µg/ml), or the blank control for 30 min. The level of phosphorylation for EphB4 was examined in each treated group by ELISA. The results showed that the phosphorylation of EphB4 increased in the ephrinB2-Fc group compared with both the IgG-Fc group and the blank control in a dose-dependent manner (Fig. 6A and 6B). Furthermore, we studied the change of EphB4 at different time points after stimulation by the ephrin-B2 ligand. The results showed that the phosphorylation level of EphB4 in K562-Rhad significantly increased after treatment with ephrinB2-Fc (4µg/ml) for 0.5h, but it began to decrease after l hour and reached its minimum after 24 hours. However, the expression level of the EphB4 protein did not significantly increase in K562-R cells treated with ephrinB2-Fc (4µg/ml). Rather, it began to decrease after 1 hour and reached its minimum after 24 hours (P<0.01) (Fig. 6C and 6D). There were no significant changes in the two control groups at each time point.

Phosphorylation of small GTPases in vitro and in vivo

EphB4/ephrins play important roles in oncogenesis and in tumor growth progression [15,16]. Many studies have indicated that they can work as either a prognostic factor or potential treatment target [17-19]. Tomasz and his team confirmed that patients with shorter RFS had decreased EphB4 expression in non-M3 AML patients [20]. Suzuki M reported that the overexpression of EphB4 was related to drug resistance in Ph+ acute lymphocytic leukemia [13]. Our study investigated the expression of Eph B4 mRNA in CML patients and identified a dramatically higher expression of EphB4 receptors in CML-BP patients compared with CML-CP patients. The amounts of EphB4 receptor expression were also strongly associated with an adverse cytogenetic response. 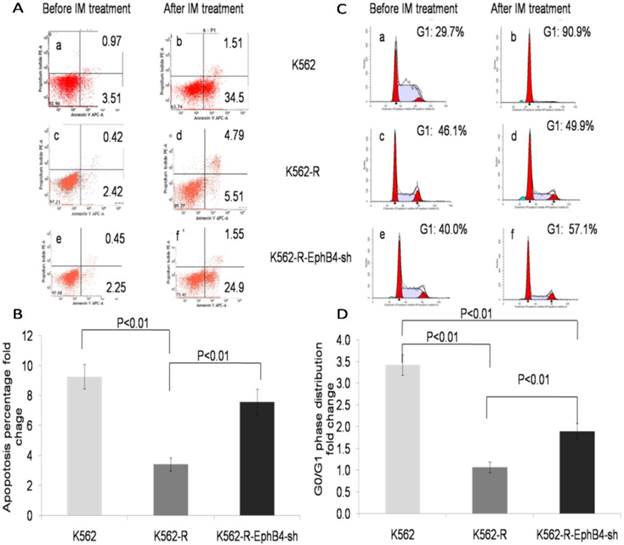 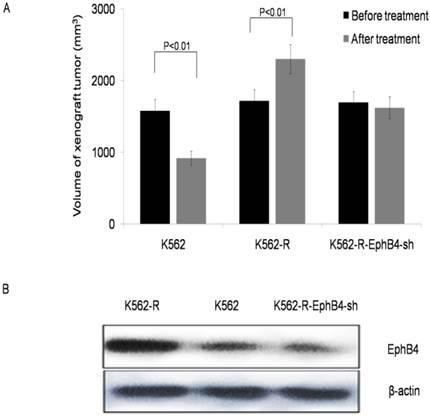 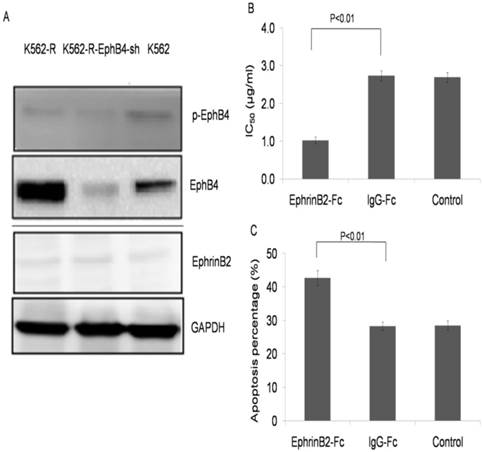 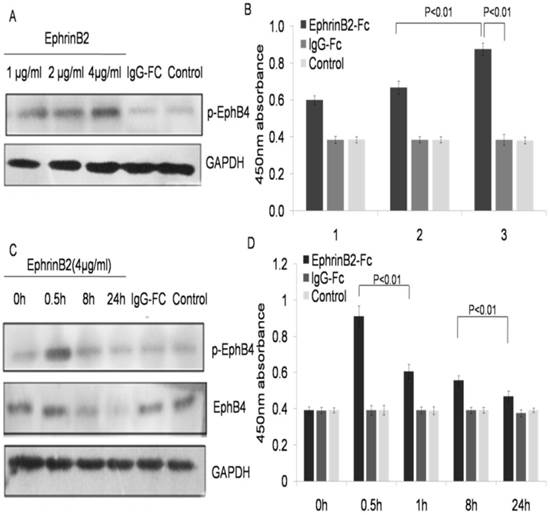 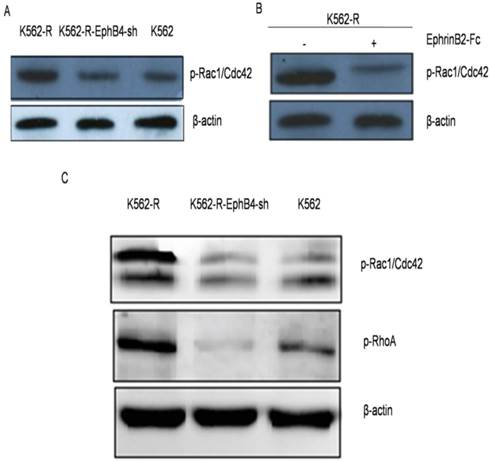 Our results demonstrate that EphB4 was over expressed in K562-R cells. Further studies showed that ephrinB2-Fc stimulation restored cell sensitivity to IM in EphB4 knockdown cells. The same effect was observed in K562-R-EphB4-sh xenograft nude mice with oral IM treatment. Together these results indicate that the EphB4 pathway is partially responsible for IM resistance. However, how the EphB4 receptor contributes to IM resistance in CML remains elusive. Several studies have demonstrated the ability of Eph receptors to activate different Rho-GTPases, such as RhoA and Rac1/Cdc42 [21]. The Rho family plays an essential role in IM resistant CML through BCR-ABL non-kinase pathways [22]. These studies suggest that EphB4 may contribute to IM resistance in CML at least partly through Rho signaling and Rho-mediated actin cytoskeleton regulation, and knockdown of EphB4 contributes to partial recovery of IM sensitivity.

In this study, our results showed that knocking down EphB4 expression resulted in resistant cells that were arrested in the G0 phase following IM treatment. Additionally, knockdown of EphB4 or ephrinB2-Fc significantly stimulated a reduction in RhoA GTPase expression in vitro and in vivo. These results illustrate an association between EphB4 and Rho GTPase. Previous studies had confirmed that the Rho-GTPase family could regulate how Eph receptors could affect the actin cytoskeleton and subsequently disrupt cell shape, adhesion, and migration [5]. In addition, Wang and his colleagues reported that Rac1-GTPase plays an important role in leukemia cell chemotherapy resistance, quiescence maintenance, and in the interaction with the bone marrow microenvironment [1]. Our previous study also demonstrated that HHT contributes to IM sensitivity by blocking the EphB4/RhoA pathway in CML cell lines [14]. Therefore, in advanced CML, Eph causes gradual leukemia cell chemotherapy resistance by up-regulating Rho-GTPase while promoting proliferation and inhibiting apoptosis by up-regulating Ras-GTPases and Akt/mTORC1.

In summary, our study demonstrated that knocking down EphB4 could restore CML cell sensitivity to IM, increase the percentage of drug-induced apoptosis, and decrease invasive ability through a GTPase (RhoA/Racl/Cdc42)-dependent mechanism. EphrinB2 played a crucial role in tumor inhibition by activating EphB4 downstream signaling. Our studies have thus provided new biomarkers for the development of novel drugs for the disease.

We would like to thank all the authors participating sites. This work was supported by National Natural Science Foundation of China (No.81300435 and No.81170521) and the Science and Technology Planning Project of Guangdong Province, China (2014A020211019).

No conflict of interest exists in the submission of this manuscript, and it is approved by all of the authors for publication.