Apoptosis, or programmed cell death, is a tightly regulated process consisting of complex biochemical cascades that involve the caspase activation through either extrinsic (death receptor), intrinsic (mitochondrial) or perforin/granzyme pathways [5,6]. Apoptosis occurs normally during development and aging as a homeostatic mechanism to maintain cell populations in tissues. In addition, apoptosis occurs as a defense mechanism such as in immune reactions or when cells are damaged by noxious agents [5]. Thus, an inappropriate apoptosis has been implicated in many pathologic conditions, such as neurodegenerative disorder and cancer [7,8]. Furthermore, recent studies have reported that cigarette smoke can induce apoptosis in several cell types [9-12]. Most studies showed that cigarette smoke inhibits cell proliferation through these apoptotic pathways, whereas there have been some reports that are contrary [8,13,14].

Autophagy, a regulated catabolic process, occurs not only continuously at basal levels for homeostatic turnover of cytoplasmic components but is also induced in response to a variety of stress stimuli including oxidative stress [12,15]. During autophagy, the cellular components are sequestered in the vesicular system and then delivered to lysosomes for degradation and recycling of biogenic components. Thus, autophagy can be viewed as a cellular attempt to survive through the removal of damaged organelles. However, intriguingly, the induction of autophagy could also be part of the cellular program leading to cell death [16,17]. Thus, failures of the cell to regulate autophagy have also been implicated in pathogenesis of cancer, cardiovascular failure, immune disease, skeletal muscle atrophy and neurodegenerative disorders [16,18].

Dichlo rodihydrofluorescein diacetate (DCF-DA) was purchased from Invitrogen (USA). N-acetyl cysteine (NAC), 3-methyladenine, and rapamycin were purchased from Sigma (USA). Filter cigarettes, each containing 0.1 mg nicotine and 1 mg tar, were used to prepare the cigarette smoke extract (CSE) used in this study. CSE was prepared in a fume hood by bubbling the smoke from a cigarette in a holder attached by rubber tubing to a peristaltic pump. The pump outflow track was attached by rubber tubing to a glass straw submerged in phosphate-buffered saline. Smoke from ten cigarettes was passed through 20 ml PBS to obtain 100% CSE. Extracts were separated into aliquots and stored at -20°C. Final concentrations of 0.5%, 1%, and 2% CSE were used for all experiments in this study. Control extracts were similarly prepared from unlit cigarettes.

Normal human gingival fibroblasts (HGFs) obtained from American Type Culture Company ((HGF-1, CRL-2014). HGFs were cultured in high-glucose Dulbecco's modified Eagle's medium (DMEM; Sigma-Aldrich, USA) supplemented with 10% fetal bovine serum and 5% penicillin/streptomycin at 37°C in 5% CO2 humidified incubators. Proliferation of HGFs was measured using the Cell Counting Kit (CCK)-8 (Dojindo, Korea). Briefly, 3 × 105 cells were seeded onto a 96-well plate and cultured for 24 or 48 hours in DMEM containing 0% to 2% CSE. After CSE exposures, the cells were treated with 10 µl CCK-8 solution per well, and incubated for 1 hr at 37°C. Formazan dye generation by cellular dehydrogenase activity was then determined by measuring absorbance at 450 nm using a microplate reader (Perkin Elmer, USA). Cell viability was expressed as percent viability of control cells cultured in the absence of CSE.

Measurement of cellular H2O2 production and apoptosis by flow cytometry

For assessing cellular H2O2 production, HGFs were cultured in DMEM with 10% fetal bovine serum following 0% to 2% CSE treatments and were stained with DCF-DA (Invitrogen, USA) dissolved in DMEM (incubated at 37°C for 20 minutes). Cells then were washed three times with PBS containing 1% fetal bovine serum and resuspended in 200 μL of 1× PBS containing 1% fetal bovine serum. Stained cells (∼10,000 cells per group) then were analyzed by flow cytometry using a FACSCalibur (BD Biosciences, USA). Flow cytometry data were analyzed using a FlowJo software and all experiments were performed in triplicate. For apoptosis assays, HGFs were cultured similarly and double-stained with Annexin V and propidium iodide (PI). About 10,000 cells for each group were then analyzed by flow cytometry as above.

After 0% to 2% CSE treatments, HGFs were subjected to Caspase 3/7 activities measurement with Caspase-Glo assay kit (Promega, USA). Briefly, about 10,000 cells were cultured on a 96-well plate and incubated with 0% to 2% CSE. 100 μl of Caspase-Glo reagent was added to each well and the content of well was gently mixed with a plate shaker at 200 rpm for one minute. The plate was then incubated at room temperature for 2 hours. The luminescence of each sample was measured in a microplate reader (Perkin Elmer, USA). The experiments were performed in triplicate and repeated on three separately-initiated cultures.

HGFs were cultured on six-well plastic plates. Following desired 0% to 2% CSE treatment, they were washed twice with PBS and then fixed with 4% formaldehyde in 0.5 ml of PBS for 30 min at room temperature. The HGFs were then washed again with PBS, blocked with PBS containing 0.5% BSA, and then incubated for 1 h with primary antibody against LC3II (Cell Signaling Technology, USA). The cells were then washed three times for 10 min per wash with PBS and incubated with a FITC-conjugated goat anti-rabbit IgG secondary antibody (Abcam, USA) for 1 h. All images were visualized by fluorescent microscopy (Zeiss, Germany) and were transferred to a computer equipped with Zen Light Edition (Zeiss, Germany) for analysis.

All experiments were performed using at least three independent cell cultures. Error bars in all figures represent the mean ± SD. The Student's two-tailed t-test was used for the determination of statistical relevance between groups, and a P value of <0.05 was considered significant.

To elucidate the mechanisms underlying the reduction in HGF viability by CSE exposures, we first examined a possible induction of apoptosis in HGF cultures in response to CSE treatments using staining HGFs with Annexin V and propidium iodide followed by flow cytometry. As shown in Fig. 2A, 1%, and 2% CSE exposures (for 24 hr) resulted in an apparent apoptotic death (positive for both Annexin V and propidium iodide staining) in HGF cultures compared to control HGFs (no CSE exposure) although 0.5% CSE exposure failed to trigger a clear apoptotic cell death. In line with viability data shown in Figure 1B, live cell portions were about 82% and 68% in 1% and 2% CSE-exposed HGF cultures respectively. Next, in order to understand molecular events during CSE-induced apoptosis in HGFs, we examined pro- and anti- apoptotic protein expressions. As shown in Fig. 2B, the Bax protein, a well-known pro-apoptotic factor, was clearly induced by 1% and 2% CSE exposures (24 hr) while an anti-apoptotic protein Bcl-xL expressions were relatively similar under various CSE exposures although there was a mild increase in Bcl-xL levels in response to CSE exposures. We also examined activities of caspase-3 and caspase-7, apoptotic executors, in HGF cultures after CSE treatments. From Fig. 2C (for both 24 and 48 hr CSE exposures), caspase 3/7 activities were increased by CSE exposures dose-dependently as well as treatment-time-dependently. Similar to our cell viability assays, caspase 3/7 activity data both 24 and 48 hr CSE treatments were obtained from a single assay in triplicates of independent experiments. Overall, these results indicate that CSE promotes apoptotic death in HGF in response to CSE exposures via both up-regulation of Bax and activation of caspase 3/7.

CSE exposures induce apoptotic death in HGFs. A: Flow cytometry analysis for discrimination of HGFs using double staining with propidium iodide and FITC-labeled annexin-V after CSE treatments for 24 hr. Percentage of double positive cells (apoptotic death) were indicated in red. B: Western blot analysis for pro-apoptotic Bax and anti-apoptotic Bcl-xL protein expression levels in HGFs followed by 24hr CSE treatments. Quantitation of Bax and Bcl-xL protein levels normalized to no CSE treatment sample (0% CSE) was shown under each band. Actin was probed as a loading control. C: Caspase 3/7 activity assay for apoptosis in HGFs with 24 hr and 48 hr CSE treatments. Data are expressed as the mean ± SD, ** indicates P < 0.01 and *** indicates P < 0.001. 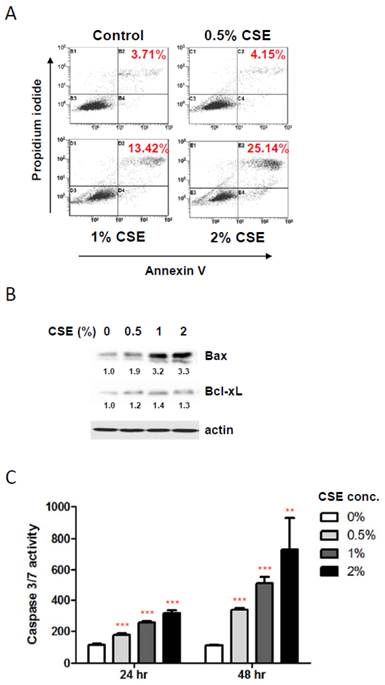 CSE exposures cause autophagy in HGFs. A: Western blot analysis for LC3II (an autophagy marker) protein expression levels in HGFs followed by 24hr CSE treatments. Quantitation of LC3II protein levels normalized to no CSE treatment sample (0% CSE) was shown under each band. Actin was probed as a loading control. B: Immunocytochemistry analysis for LC3II fluorescent puncta (cytosolic autophagosomes) in HGFs treated with CSE. Arrows indicate cytosolic LC3II puncta. Quantitation of LC3 puncta per cell was presented in the bottom margin.

Because autophagy, a well-known process for recycling cellular components and damaged organelles, is known to occur in response to oxidative stress, we examined whether autophagy is induced in HGFs by CSE treatments. We first looked at protein levels of LC3II, a reliable marker of autophagosome by Western blotting assays. As shown in Fig. 3A, LC3II levels are clearly increased in response to CSE exposures. A slight increase in LC3II levels was observed in HGFs exposed by 0.5% while a more clear increase in LC3II levels were seen in HGFs treated with 1% or 2% CSE. Interestingly, we found that LC3II levels are higher in 1% CSE treatment than 2% CSE. We observed this trend of LC3II expression at least four independent repeats. These results indicated that HGFs trigger autophagy in response to CSE exposures. To confirm this CSE-induced autophagy in HGFs, we also monitored CSE-treated HGFs using fluorescence microscopy for LC3II fluorescent puncta in autophagosomes. From Fig. 3B, in accordance with LC3II Western blot data (Fig. 3A), cytosolic LC3II puncta were observed clearly in 1% CSE-treated HGFs at both 12 and 24 hr incubation time points. The numbers of LC3II puncta per cell were increased in 1% CSE treated HGFs compared to no CSE treatment samples (0% CSE). LC3II puncta were also seen more clearly by a longer CSE exposure time (i.e., higher in 24 hr compared to 12 hr CSE treatment). Together, the finding that both up-regulation of LC3II protein levels and presence of cytosolic fluorescence LC3II puncta were observed in HGFs treated with CSE demonstrated that autophagy occur in HGFs upon CSE exposures.

Autophagy attenuates the reduction in HGF viabilities by CSE 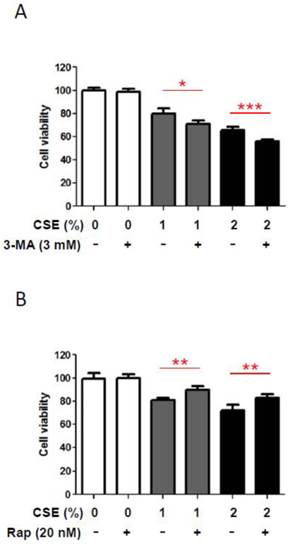 Gingival fibroblasts play a key role in maintaining homeostasis of the gingival connective tissue by both synthesizing and degrading their extracellular matrix [23]. In addition, these fibroblasts have also been implicated in local immune defenses against various pathogens including periodontal bacteria. For example, because they express several immunologic receptors, bacterial stimulation of gingival fibroblasts induces the secretion of various inflammation-mediating cytokines including IL-6, IL-8, and IL-1𝛽. These observations clearly indicate that gingival fibroblasts can participate actively in immune and inflammatory responses [24,25]. Not surprisingly, these immune responses can also be affected when gingival fibroblasts are exposed to smoke. Moreover, a huge amount of evidences have implicated the apoptosis and autophagy pathways in the body immune responses [26-29]. Inappropriate induction of apoptosis appears to be critical for the pathogenesis in several immune-mediated disorders and inflammation. There is also a complex reciprocal relationship between autophagy and immunity. For example, the autophagy proteins induce and/or suppress immune and inflammatory responses while immune and inflammatory signals also act in both induction and suppression of autophagy [30].