Background: Left ventricular hypertrophy (LVH) is a frequent echocardiographic feature in Fabry disease (FD) and in severe cases may be confused with hypertrophic cardiomyopathy (HCM) of other origin. The prevalence of FD in patients primarily diagnosed with HCM varies considerably in screening and case finding studies, respectively. In a significant proportion of patients, presenting with only mild or moderate LVH and unspecific clinical signs FD may remain undiagnosed. Urinary Gb3 isoforms have been shown to detect FD in both, women and men. We examined whether this non-invasive method would help to identify new FD cases in a non-selected cohort of patients with various degree of LVH.

Methods and results: Consecutive patients older than 18 years with a diastolic interventricular septal wall thickness of ≥12mm determined by echocardiography were included. Referral diagnosis was documented and spot urine was collected. Gb3 was measured by mass spectroscopy. Subjects with an elevated Gb3-24:18 ratio were clinically examined for signs of FD, α-galactosidase-A activity in leukocytes was determined and GLA-mutation-analysis was performed. We examined 2596 patients. In 99 subjects urinary Gb3 isoforms excretion were elevated. In these patients no new cases of FD were identified by extended FD assessment. In two of three patients formerly diagnosed with FD Gb3-24:18 ratio was elevated and would have led to further diagnostic evaluation.

Conclusion: Measurement of urinary Gb3 isoforms in a non-selected cohort with LVH was unable to identify new cases of FD. False positive results may be prevented by more restricted inclusion criteria and may improve diagnostic accuracy of this method.

Fabry disease (FD) is a rare X-linked lysosomal storage disorder with reduced or absent activity of α-galactosidase-A (AGAL) and consecutive accumulation of globotriaosylceramide (Gb3) in various organs, predominantly within the kidneys, the heart and the central nervous system [1]. Frequently, FD patients present with unspecific clinical signs and the mean delay from onset of the first symptoms to a definite diagnosis is 13.7 years [2]. Cardiologists diagnose only five percent of FD patients. An early diagnosis could lead to the initiation of specific treatment and prevent disease progression [3]. Therefore, experts suggested systematic screening and case-finding concepts for populations at risk [4-6].

Progressive left ventricular hypertrophy (LVH) is a common feature in FD [1] and the prevalence of FD in screened cohorts with unexplained LVH or hypertrophic cardiomyopathy ranged between zero and 12% [7-15]. However, patients with FD presenting with mild to moderate LVH, were often excluded in screening studies [16,17]. In these studies cases of FD may remain undiagnosed due to selection bias [15]. While enzymatic and genetic testing are the first choice in patients with clinically suspected FD, measurement of urinary Gb3 isoforms could serve as a non-invasive and cost-effective method for a primary screening in large cohorts at risk [18,19]. We aimed to examine a clinically non-selected cohort of patients with a various degree of LVH for FD by measuring urinary Gb3 isoforms.

Patients consecutively referred for an echocardiographic examination to the outpatient service of the Department of Cardiology at the Medical University of Vienna and eligible for study participation were included. Inclusion criteria was an echocardiographically established diagnosis of LVH, defined as left ventricular wall thickness of ≥12 mm and age over 18 years. Patients were not prescreened with respect to common FD signs or symptoms. From patients willing to participate in the study urine samples were collected. Subjects previously diagnosed with FD, which met the inclusion criteria, were included in the study, but separately statistically analyzed.

All subjects gave informed consent, the ethics committee approved the study (ClinicalTrails.gov identifier: NCT00871611), and the study was conducted in accordance with the Declaration of Helsinki.

Spot urine samples (10 mL) were stored in Sarstedt Monovette tubes (10 mL, Nr. 10252; Sarstedt AG&Co. Nümbrecht, Germany) at four degrees Celsius and shipped to the Laboratory of Metabolic Diseases at the Department of Pediatrics at the Medical University of Graz (E. P.) no longer than 14 days before analyzed. After the addition of 0.01% sodium acid samples were stored at minus 70 degrees Celsius until use.

Samples were processed for measurement with electrospray ionization mass spectrometry (ESI-MS) as previously described [20]. In brief, internal standard (stearoyl-Gb3-d35) was added to 5 ml aliquots of samples and glycolipids were purified by solid-phase extraction on C18 bonded silica cartridges. Glycolipids were measured as positive ions using full scan and neutral loss scan modes exactly as described [19,20]. Total Gb3, as well as the isoforms Gb3-24 and Gb3-18, are given in nanograms per milligrams of urinary creatinine (total Gb3:creatinine, Gb3-24:creatinine and, Gb3-18:creatinine). The ratio of the isoforms Gb3-24:creatinine and Gb3-18:creatinine (Gb3-24:18) was used for screening procedures.

The full scan spectra of all samples were visually evaluated (G.F.) for plausibility of quantitation [19]. Quantitation of chromatograms, in which the peak height of the internal standard (m/z = 1109.9) was less than twice the average background were discarded (uncertain analytical performance, UAP) [19].

Subjects with a urinary Gb3 concentration exceeding the predefined cut-off (Gb3-24:18 ratio > 2.3) were classified to be at risk for Fabry disease. The AGAL activity was tested and GLA-mutation-analysis was performed as previously described (4). Medical history and family history were determined by questionnaire. Subjects not available for confirmation testing (not interested, not available, deceased) were investigated as detailed as possible by means of medical charts.

In total, 2676 subjects were included in the study, of which 80 subjects were excluded due to double inclusion and three subjects had a previously established diagnosis of FD (figure 1). The finally screened study cohort consisted of 2596 patients. Demographic details about the study population are given in table 1.

In 2596 patients the urinary Gb3 concentration could be determined, of which 2494 (96%) were classified as unremarkable. The mean total urinary Gb3:creatinine concentration was 236.8 (SD=175.5) ng/mg, the urinary Gb3-24:creatinine concentration was 38.7 (SD=29.3) ng/mg, and the mean urinary Gb3-24:18 ratio was 1.34 (SD=0.74) (figure 2 (A), (B), and (C)). Ninety-nine (4%) subjects showed an elevated urinary Gb3-24:18 isoform ratio (mean 3.48 (SD=2.63) and were invited for an additional visit to evaluate the medical history and clinical symptoms, to test for GLA mutations and to determine the AGAL activity in leukocytes. Eight subjects withdrew informed consent for genetic testing, in 16 no contact could be established after several attempts, and 4 patients were deceased at that time. Chart review of those 28 subjects did not show any specific hints with regard to FD, definite exclusion of this diagnosis however was unfeasible. All remaining 71 subjects had a wild-type GLA gene and the mean AGAL activity was 101.5 (SD=29.8) nMol/mg prot/h.

Three diagnosed FD patients meeting the inclusion criteria (table 2), of which two brothers with a classic phenotype could be identified by the screening method. The women with an unknown genetic alteration and AGAL activity within normal limits, but classic symptoms of FD, had a normal urinary Gb3 excretion, determined in the 24-hour urine collection and by means of the applied method. 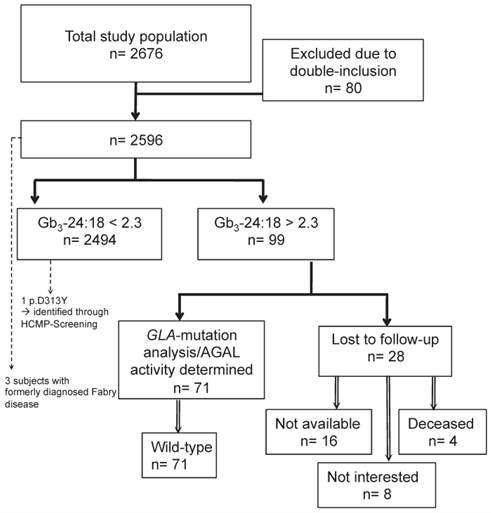 Total urinary Gb3:creatinine (A), Gb3-24:creatinine (B), and the Gb3-24:18 ratio in 2494 subjects. The dashed line in panel (C) indicates the suggested critical cut-off value of 2.3 ng/mg for subjects suspicious for Fabry disease. 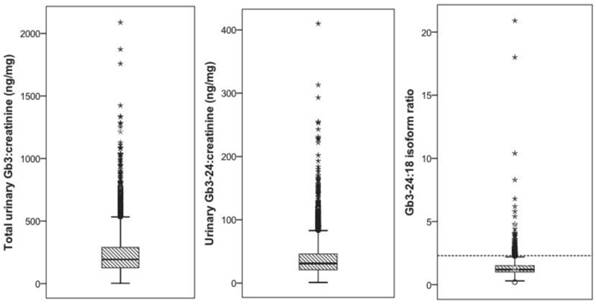 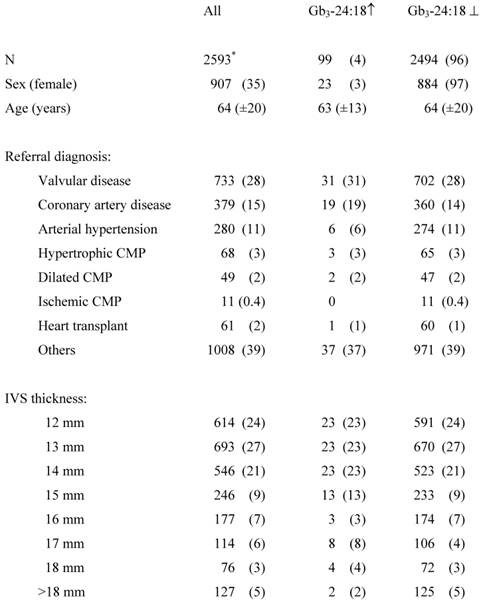 This is the first case finding study for FD in a cohort with LVH of variable severity using urinary Gb3 isoform measurement. In 2596 patients referred to the echocardiography laboratory in a tertiary care center we could not identify a disease-causing GLA mutation.

In previous studies (table 3), attributable to different inclusion criteria, the prevalence of FD in cohorts at risk ranged between 0 and 12% (table 3). Elliot et al. published a prevalence of 0.5% in patients with hypertrophic cardiomyopathy. However, the authors concluded that restricted inclusion criteria underestimate the prevalence of FD and “that there may still be thousands of patients […] with FD who remain undiagnosed“ [15]. Following this hypothesis, our study cohort comprised patients with a various severity of LVH, including mild or moderate LVH (table 1). Cardiac involvement in FD presents heterogeneously: In 139 FD patients not on enzyme replacement therapy (mean age 43.1±12.6 years) about 60% had a history of cardiovascular symptoms, including dyspnea angina, chest pain, edema, arterial hypertension or a murmur, however the mean IVS thickness in this cohort was only 13.3 (±3.4) mm for females and 14.9 (±4.1) mm for males. Thirty-one percent had arterial hypertension, although the cohort was relatively young [16]. In the Fabry outcome survey (FOS) LVH was present in only 33% of untreated females and 53% of untreated males. LVH was significantly associated with cardiac symptoms, arrhythmias, and valvular disease, emphasizing the unspecific cardiac presentation in FD in the majority of cases [17]. Accordingly, patients with signs or symptoms of cardiovascular disease were not excluded in our study.

Previous studies attributable to different inclusion criteria investigating the prevalence of FD in cohorts at risk.

This is the first study that used urinary Gb3 isoform measurements as a case finding tool. Compared to blood sampling, urine testing is easily applied, non-invasive, and cost-saving, especially in large cohorts. Increased Gb3 excretion is a specific feature of FD, and therefore would render this approach superior for primary screening of large cohorts as proposed by several authors [18]. Paschke et al. demonstrated that measuring Gb3 isoforms enables reliable identification of also female subjects [19]. This can be explained by the method itself: while female FD patients excrete a lower amount of total Gb3 compared to males, the proportion of the Gb3-24 isoform is elevated compared to the other isoforms. Since Gb3-18 is steadily excreted over the day it can be used to identify higher amounts of Gb3-24 in relation to Gb3-18 and therefore emphasize the disproportion of Gb3 isoforms. In the present study 99 patients exceeded the predefined cut-off Gb3 ratio and hence, FD was suspected, but later excluded by enzymatic and genetic testing.

In the cohort examined by Paschke et al. the sensitivity and specificity was 86% (95% CI: 68% to 96%) and 96% (95% CI: 94% to 98%), respectively, which was considered adequate for a case-finding study [19]. In our study the number of false positive subjects was 4%, but the significance of elevated Gb3 ratios in these patients is yet unclear. Recently, Schiffmann et al. found out that increased Gb3 levels were associated with increased risk of death in patients with heart disease [21]. Recently, we evaluated interfering parameters in determination of urinary Gb3 in 602 subjects with chronic kidney disease. The Gb3 isoform ratio was unaffected by leukocyturia, hematuria, bacteriuria, proteinuria, and gender as well as renal function. In contrast, total urinary Gb3 was higher in subjects with a higher load of leukocytes and bacteria and in women in general, rendering it inferior to the Gb3 isoform ratio as screening method [22]. Additionally, this gives good evidence that mild urinary Gb3 elevation is not limited to cardiac patients.

The applied urinary testing method comprised several limitations in our study: Urinary Gb3 excretion is dependent on the type of mutation and thus lower in subjects with milder phenotypes. Consequently, one female subject with previously diagnosed FD (carrying an unknown GLA alteration) was not detected in our study. Moreover, she received enzyme replacement therapy, which is well known to reduce urinary Gb3 excretion. Noteworthy, this is in contrast to the pilot study used to calculate the cut-off values for the applied screening method, and in which female FD patients were not treated with enzyme replacement therapy. Further on, it was previously described that some subjects comprising missense mutation with residual enzyme activity do neither excrete Gb3 nor lyso-Gb3 [23]. These factors limited the accuracy of the applied urinary screening test in this cohort. In 30% of the subjects with elevated Gb3 isoform ratio FD presence was excluded based solely on medical history, which is of limited reliability. The rate of drop-outs and loss to follow-up altogether was 1.1%, which is not unlikely in a case-finding study.

The study was funded by a grant from Shire HGT Deutschland GmbH, Berlin, Germany.