Mesenchymal stem cells (MSCs), multi-potential stem cells that reside largely within the bone marrow, have the capacity to differentiate into many cell lineages, such as adipocytes, osteocytes, and chondrocytes [1]. The MSCs derived from bone marrow exert immunomodulatory effects and have been widely studied in various human immune disorders, especially in autoimmune diseases [2-4]. Accumulating evidence suggests that MSCs derived from bone marrow have the ability to suppress allergic responses in asthma [5-7]. However, the underlying mechanism remains unclear.

Fcγ receptor II (FcγRII, also known as CD32) is a surface receptor mainly expressed on leukocytes, including B cells, follicular dendritic cells, macrophages, and neutrophils [8]. FcγRIIB is a low-affinity inhibitory Fcγ receptor that is highly homologous on its extracellular domain to the activating Fcγ receptor FcγRIIA [9]. Although FcγRIIB is known for its inhibitory effects on cell activation and cytokine production in many cell types, such as natural killer cells [10] and phagocytes [11], the potential role of FcγRIIB in the regulation of MSC function is still poorly understood.

In the present study, we investigated the influence of FcγRIIB on the biological functions of MSCs. To address this point, FcγRIIB-deficient (FcγRIIB-/-) mice were used, and the functions of MSCs derived from wild-type (WT) or FcγRIIB-/- mice were compared in vitro. Furthermore, a mouse acute asthma model was developed, and the differences in the in vivo function of MSCs derived from WT or FcγRIIB-/- mice were studied. Our findings may provide valuable insights into understanding the biological significance of FcγRIIB in mediating MSC function.

Balb/c and C57/B6 mice were purchased from BK Experimental Animal (Shanghai, China). FcγRIIB knockout (FcγRIIB-/-) mice were purchased from Jackson lab (Bar Harbor, ME, USA). All mice were housed in specific pathogen-free conditions. All experimental procedures were conducted in accordance with the National Institutes of Health Guide for the Care and Use of Laboratory Animals. The animal experiments were performed with the approval of the Scientific Investigation Board of Second Military Medical University (Shanghai, China).

MSCs were prepared from mouse bone marrow (BM) derived from (WT) or FcγRIIB-/- C57/B6 mice as described previously [12]. Briefly, BM cells were flushed from femurs of mice and the red blood cells were lysed by incubating cells in Tris-NH4Cl solution for 2 min. BM cells were maintained in Dulbecco's Modified Eagle Medium containing 10% fetal bovine serum (FBS), 100 U/ml penicillin, 100 µg/ml streptomycin, and 6 ng/ml basic fibroblast growth factor (bFGF) for 7 days for in vitro differentiation. Cells were incubated in a 5%CO2-humidified incubator at 37°C. The adherent cells were detached using trypsin-ethylene diamine tetraacetic acid (EDTA) and harvested for a new passage. After three passages, cells were harvested and used for flow cytometric analysis. Adherent cells after three passages were able to differentiate into adipocytes and chondrocytes in vitro.

Co-culture of MSCs with BMDCs

Passage 4 or 5 MSCs were cultured in six-well plates at a density of 3×105 cells/well. After incubation in a 5% CO2 incubator for 5-6 h, the culture medium was removed and replaced with 2 mL of BMDC suspension (0.5×105 cells/mL in RPMI-1640 medium containing 5% FBS). Cells were cultured in a 5% CO2-humidified incubator at 37°C until use in experiments.

Determination of DC maturation and function

BMDCs were stimulated with 100 ng/ml lipopolysaccharide (LPS) for 24 h. The DC surface markers including I-Ab and CD86 were analyzed using flow cytometric analysis. Data were analyzed by FlowJo software. To evaluate BMDC function, OT-II T cells were purified by staining of OTII splenocytes with anti-mouse CD4 microbeads (Miltenyi Biotech). Purified OT-II T cells were labeled with carboxyfluorescein succinimidyl ester (CFSE) by incubating the cells with 5µM CFSE dissolved in phosphate-buffered (PBS) for 5 min at 37°C. Then, BMDCs were incubated with CFSE-labeled OT-II T cells in the presence of 100µM OVA peptide for 72 h until flow cytometric analysis.

Balb/c mice were actively sensitized by intra-peritoneal injection of 100 µg OVA emulsified in aluminum hydroxide on days 1 and 14. Aerosol challenge was conducted from day 21 to day 24. Thirty minutes prior to challenge, mice were anesthetized with isofluorin and given 1 ×106 MSCs derived from either WT or FcγRIIB-/- mice intranasally. Intranasal administration of cell-free PBS was used as a control. During aerosol challenge, animals were treated once daily through a PARI Boy N (PARI GmbH, Germany) by holding 5 ml 1% OVA for 30 min from day 21 to day 24. After the last challenge, mice were euthanized and blood samples were collected through cardiac puncture. Serum samples were collected for ELISA analysis using an OVA-specific IgE ELISA kit. Bronchoalveolar lavage fluid (BALF) was prepared using 1ml PBS. Total cell numbers in BALF, including lymphocytes, macrophages, eosinophils, and neutrophils, were counted after Gimsa staining. Supernatants of BALF were collected for ELISA analysis of cytokine production. Lung tissues were carefully removed, fixed in formalin, embedded in paraffin, and prepared as 5-μm-thick sections. Lung sections were subjected to hematoxylin and eosin (HE) staining for histological examination.

Expression of FcγRIIB by MSCs

To characterize the expression of FcγRIIB in MSCs, MSCs were isolated from bone marrow and cultured in vitro. Flow cytometric analysis using specific cell surface markers demonstrated that the cultured cells were CD29-, CD44-, and Flk-positive and CD45- and CD34-negative. In addition, these cells had the capability to differentiate into adipocytes or chondrocytes in vitro, indicating these cells had characteristics of MSCs derived from bone marrow. Flow cytometric analysis showed a significantly increased level of FcγRIIB in MSCs based on negative isotype staining (Fig. 1A). Moreover, very little FcγRIIB could be detected in MSCs derived from FcγRIIB-/- mice (Fig. 1B). 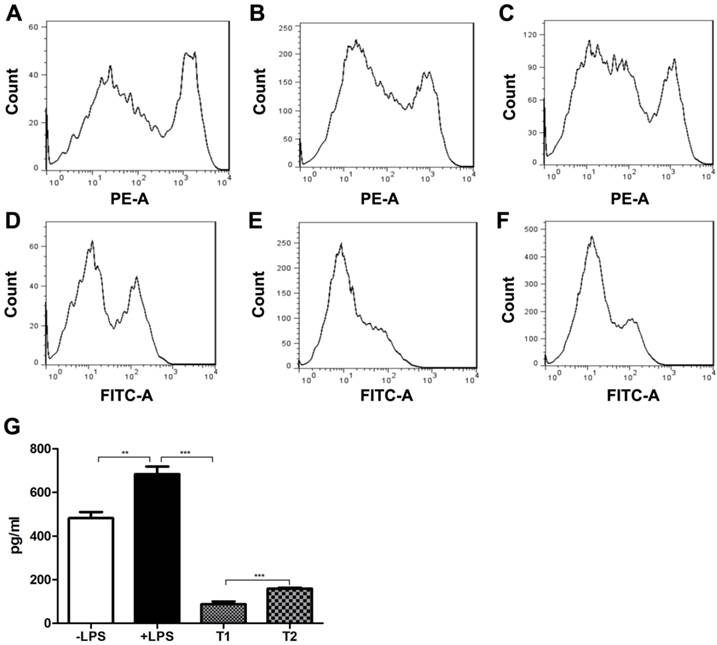 We next investigated the influence of FcγRIIB deficiency on MSC function, such as the promotion of DC maturation. For this purpose, BMDCs were co-cultured with MSCs derived from WT mice. Upon LPS stimulation, the levels of the DC surface markers including I-Ab and CD86 were greatly increased as compared with control (Fig. 2). However, co-culture of BMDCs with WT MSCs significantly suppressed the I-Ab and CD86 expression. In addition, co-culture of BMDCs with MSCs derived from FcγRIIB-/- mice reversed the downregulation of I-Ab and CD86 induced by WT MSC co-culture. Similarly, production of the proinflammatory cytokine IL-12 was also elevated in BMDCs after LPS stimulation as compared with control (P<0.001). The IL-12 secretion was remarkably decreased in BMDCs co-cultured with WT MSCs (P<0.001), whereas co-culture of BMDCs with MSCs derived from FcγRIIB-/- mice reversed the reduction of IL-12 production induced by WT MSCs co-culture (P<0.001). These data indicate that MSCs play a suppressive role in DC maturation, and FcγRIIB deficiency efficiently reversed the inhibitory effect of MSCs on dendritic cell maturation.

To evaluate the effects of FcγRIIB on the MSC-regulated antigen-specific T-cell response, CFSC-labeled OT-II T cells were added to BMDCs co-cultured with MSCs derived from WT or FcγRIIB-/- mice in the presence of OVA. Seventy-two hours after incubation, the CFSE division was examined using flow cytometric analysis. As revealed by Fig. 3, the division capability of OT-II T cells in BMDCs co-cultured with FcγRIIB-/- MSCs was higher than that of cells co-cultured with WT MSCs, suggesting FcγRIIB-/- MSCs are less potent at suppressing the antigen-specific T-cell response than WT MSCs.

To address the molecular mechanism underlying the compromised suppressive effect of FcγRIIB-/- MSCs, we compared the expression levels of Smad2, Smad3, and Cox-2, which are involved in inflammation response, between WT and FcγRIIB-/- MSCs by real-time quantitative PCR. Compared to FcγRIIB-/- MSCs, WT MSCs expressed a 10-fold enhancement in Smad2, Smad3, and Cox-2 mRNA (Fig. 5A). The protein expression of Cox-2 was also downregulated in FcγRIIB-/- MSCs compared to WT MSCs (Fig. 5B). Moreover, the PGE2 production in the supernatants of cultured WT MSCs was significantly higher than that in cultured FcγRIIB-/- MSCs (P<0.001; Fig. 5C). These results suggest that the compromised suppressive function of FcγRIIB-deficient MSCs might be related to the reduced expression of the molecules mentioned above. 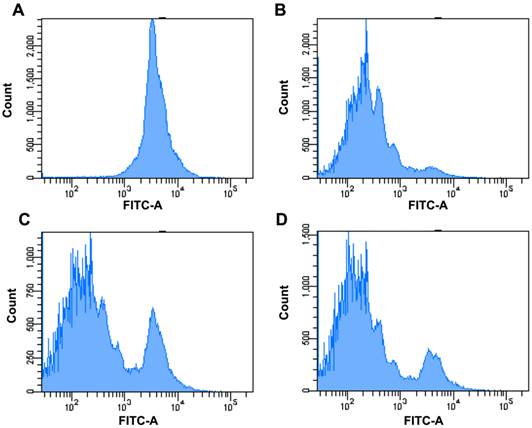 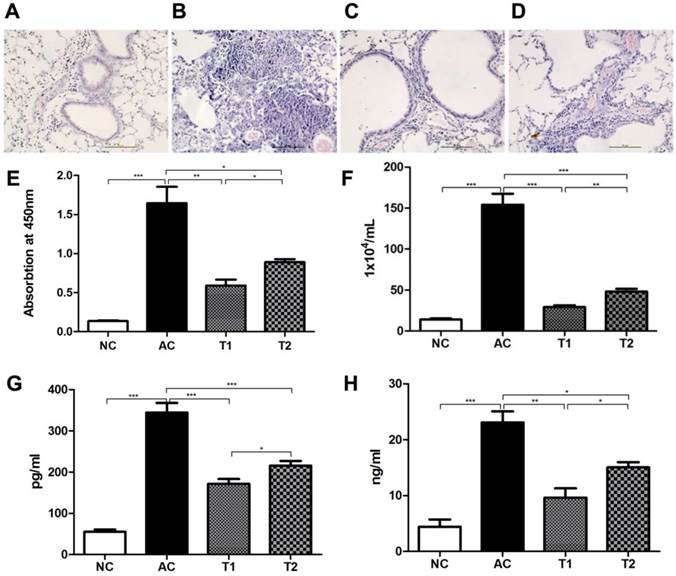 MSCs are known to possess an array of immunosuppressive capabilities. For instance, MSCs suppress DC migration, maturation, and antigen presentation in vitro [14]. In addition, the immunosuppression properties of MSCs also include the MSC-mediated proliferation suppression of many immune cells, such as T lymphocytes, B lymphocytes, and natural killer cells [15]. Consistent with these findings, we also detected immunosuppression of DC maturation and function by MSCs derived from bone marrow. Moreover, intranasal administration of MSCs effectively modulated inflammation in an experimental model of asthma, which is in accordance with the results of a previous report [16].

FcγRIIB is known for its inhibitory role for B lymphocyte activation [17], and the absence of FcγRIIB facilitates the induction of autoimmune disease [18]. Baerenwaldt et al. demonstrated that FcγRIIB serves as a checkpoint of humoral tolerance in the human immune system, as impaired FcγRIIB function leads to the production of increased levels of serum immunoglobulins, the production of different autoantibody specificities, and an elevated generation of human plasmablasts and plasma cells in vivo [19]. In the present study, we found that MSCs derived from FcγRIIB-/- mice had restored function in mediating DC maturation. Our in vivo experiment further indicated that WT MSC therapy is more potent at decreasing inflammatory cytokine production than FcγRIIB-/- MSC therapy. These results suggest that FcγRIIB also plays a negative role in regulating MSC functions.

Smad2 and Smad3 are crucial intracellular mediators of airway inflammation that act through regulating transforming growth factor-β (TGF-β) signaling [20]. Prostaglandins (PGs), such as PGE2, are the metabolic products of the Cox pathway, which play important roles in inflammation and asthma [21]. Our previous study revealed that immune complex induced massive PGE2 production in macrophages through FcγRII induction [22]. Blockage of PGE2 production by celecoxib restored LPS-induced endotoxin shock in FcγRIIB-/- mice, indicating FcγRIIB-mediated PGE2 production is essential in immune suppression [22]. Here, we detected the reduced Smad2, Smad3, Cox-2, and PGE2 production in FcγRIIB-/- MSCs, implying the inhibitory effects of FcγRIIB on MSCs might be related to the decreased expression of these molecules. However, the precise mechanism involved in this process still needs to be further clarified.

In summary, our study demonstrated for the first time that FcγRIIB might play an essential role in regulating the inhibitory effects of MSCs derived from bone marrow. These findings may provide valuable insights into developing novel strategies to improve the suppressive functions of MSCs in cell-based clinical therapy.

We declare that we have no conflicts of interest.