Philadelphia chromosome-negative chronic myeloproliferative neoplasms (Ph- MPN) are clonal hematopoietic diseases which include polycythemia vera (PV), essential thrombocythemia (ET) and primary myelofibrosis (PMF). A gain-of-function point mutation has been reported in the Janus 2 tyrosine kinase (JAK2) gene, which increases JAK2 kinase activity and has the potential to affect clinical outcomes [1-2]. The JAK2V617F mutation is presented in about 95% of PV patients, and in approximately 50% of ET and PMF patients [3-4].

An increase in JAK2V617F mutation is associated with higher expression of downstream target genes [10-12] and enhanced granulocyte activation [6]. Several studies have reported the relationships between the mutant allele burden and clinical phenotypes [13-14, 20]. The impact of JAK2V617F mutation burden on several clinical parameters such as WBC counts, haemoglobin concentration, platelet counts, spleen size and thrombosis - especially for thrombotic events had been demonstrated in MPN patients [13-14]. In addition, association between JAK2V617F mutation burden and thrombotic risk has also been reported [15-16].

The onset of these diseases is usually gradual and associated with elevated number of blood cells and splenomegaly. In some patients the onset is presented with thrombus and bleeding. The prevalence of overt MPN and that of JAK2V617F mutation in Korean patients with splanchnic vein thrombosis (SVT) were lower than in previous reports [17]. The association between JAK2V617F mutation burden and clinical phenotype in Chinese patients is unknown. We investigated this mutation in a cohort of 170 JAK2V617F-positive patients with PV and ET to better understand the effect of the JAK2V617F mutant allele burden on survival of Chinese patients and its relationship to disease-related complications, especially thrombosis.

There were 300 patients diagnosed with PV and ET at our institute from July 2009 to December 2011, and JAK2V617F mutation was identified in 186 cases including 64 PV and 122 ET. The mutation-positive rates was 95.5% (64/67) in PV patients and 52.4% (122/233) in ET patients. Notably, only 170 specimens including 54 PV and 116 ET were involved in this study. All patients in this study met the World Health Organization (WHO) criteria published in 2008 for the diagnosis of MPN, and written informed consent from the subjects were obtained prior to the collection of all samples. The general characteristics of the patients are shown in Table 1 and splenomegaly was determined based on ultrasound investigations.

Heparin anti-coagulated bone marrow was collected from patients, and then mononuclear cells were separated by Lymphocyte separation medium. Genomic DNA was extracted from mononuclear cells using DNA isolation kit (Qiagen, Courtaboeuf, France) according to the manufacturer's instructions, and stored in aliquots at -80℃ until further use.

The presence of JAK2V617F mutation was screened by allele specific polymerase chain reaction (PCR) by using PCR System 2700 (Applied Biosystems, Singapore, CA, USA). There were two forward primers and one reverse primer. The primer sequences of JAK2 were as follows:

The 25μl of PCR mixture consisted of 12.5μl of 2×Taq MasterMix (ComWin Biotech, Beijing, China), 1.2μl of F1, 1.3μl of F2, 2.5μl of R, 5.5μl of deionized water, and 2μl of samples including about 8ng of genomic DNA. The reactive condition involved preliminary denaturation at 94°C for 11 min, followed by 36 cycles of denaturation at 94°C for 30s, annealing at 55°C for 30s, extension at 72°C for 30s, followed by a final elongation step at 72°C for 6min, and then maintained at 10°C. The amplified products were separated based on molecular weight by electrophoresis using a 2% agarose gel. The amplified PCR products were sequenced by using the BigDye Terminator chemistry (Applied Biosystems) and analysed on an ABI 3100 capillary sequencer.

The primers were purchased from Invitrogen (Invitrogen, USA) and the TaqMan MGB probes were purchased from Applied Biosystems (Hayward, USA). The RT-PCR mixture (25µL final volume) contained 12.5μl Platinum SuperMix-UDG (Invitrogen, USA), 0.1μl ROX, 0.5μl 10μM forward primer, 0.5μl 10μM reverse primer, 0.3μl 10μM probe T, 0.3μl 10μM probe G, DNA template (total for about 100ng), and deionized water. Amplification was performed by a standard protocol recommended by the manufacturer (50°C for 2 min; 95°C for 10min; 40 repeated cycles of 95°C for 15s, 55°C for 20s and 72°C for 1min). The reaction of each sample was run in triplicates. The JAK2V617F proportion was calculated from cycle threshold (CT). Every sample has a value of ΔCT, which is the difference of the values of CT between the two probes. The ratio of JAK2V617F mutation to wildtype was 2-ΔCT. The proportion of JAK2V617F mutation was that 2-ΔCT was divided by one plus 2-ΔCT.

Numerical variables were tested for normal distribution with the Kolmogorov-Smirnov test. Data are expressed as mean ± standard deviation (SD). Statistical analysis was either t-test or non-parametric Mann-Whitney-Wilcoxon U test, based on the distribution of the studied variable. The non-parametric Pearson's product-moment correlation analysis was used to test for the relationship between JAK2V617F mutation burden and different clinical variables. For normally distributed variables, Pearson correlation was used. Comparisons of categorical variables between groups were carried out using the χ2 test. Logistic Regression was used to test for the influence of many factors on categorical variables. Cox proportional hazard regression was used to test the impact of different covariates on risk of thrombosis in ET patients. And all tests for statistical significance were two-tailed and P values less than 0.05 were considered to be statistically significant. Kaplan-Meier analysis was used to examine whether age (<60 years =0; ≥60 years =1), gender (male=0; female=1), and JAK2V617F mutation status (<37.1% JAK2V617F allele burden=0, ≥37.1 JAK2V617F allele burden=1 for PV; and <16.5% JAK2V617F allele burden=0, ≥16.5% JAK2V617F allele burden=1 for ET) were related with PV and ET patients' survival respectively.

The accuracy of PCR assay in detecting JAK2V617F mutation

JAK2V617F mutation status was screened by three primers allele specific PCR assay using genomic DNA as a template. The amplified products were separated by electrophoresis on a 2 % agarose gel. The mutant DNA was detected using RT-PCR and confirmed by sequencing. The results were consistent between allele specific PCR and RT-PCR which confirmed that the RT-PCR method to detect the JAK2V617F mutation burden was feasible. 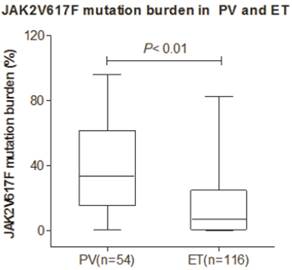 Kaplan-Meier analyses were performed on the entire cohort to determine the relative prognostic values of known prognostic variables and JAK2V617F allele burden for overall survival. Date of last follow-up was 1 November 2012 or date of last contact. The median follow-up time of PV survivors was 31 months (range, 8-141 months), 31 months (range, 3-360 months) for ET survivors. All patients were scheduled to visit the doctor every 3 months and the data was documented and collected. During follow-up, no patients progressed to post-PV/ET myelofibrosis, MDS or leukemia. In PV patients, due to no dead case, we could not analyze the influence of the JAK2V617F allele burden on overall survival (OS). Among 116 ET patients, 2 (1.2%) died and the causes of death were intraperitoneal hemorrhage in one patient and lung infection with leg dropsy in the other. Univariate analysis showed that the JAK2V617F allele burden analyzed as categorical variable, did not affect survival. And it also showed that no prognostic variable affected survival, including WBC counts, age, gender, splenomegaly and thrombosis (P> 0.05).

Kaplan-Meier analyses were used to analyze "event free survival" to confirm a risk of the thrombosis. It was found that thrombosis had no statistical effect on "event free survival" on ET patients (P> 0.05) (Figure 2). Male, high hemoglobin (HGB above 150g/L), and increased JAK2V617F mutation burden (JAK2V617F allele burden ≥16.5%) were the risk factors of thrombosis in patients with PV (P< 0.05). But these variables were not the risk factors of thrombosis for ET (P> 0.05). No other variables were found to be risk factors in patients with PV or ET, including WBC counts, age and splenomegaly (P> 0.05). Multivariable analysis (Table 3) showed that these covariates analyzed either as a continuous or categorical variable, did not significantly correlate with the risk of thrombosis in ET patients by Cox proportional hazard regression, except for JAK2V617F allele burden.

The effect of thrombotic events on event free survival in ET patients. Kaplan-Meier analysis for statistical significance is two-tailed and P values less than 0.05 are considered statistically significant. 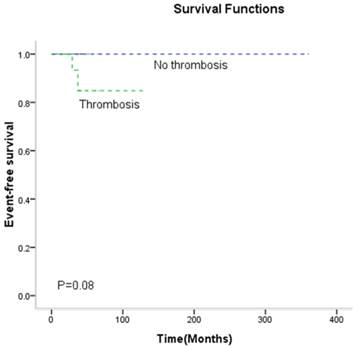 Multivariable analysis including clinical parameters in 71 patients with ET

It has previously been suggested that gender might influence the percentage of JAK2V617F-positive disease, since it happened more frequently in men with PV [22] and women with ET [23]. It was quite intriguing that males seemed to have higher JAK2V617F allele burdens than females [8]. However, in our study, sex and age did not affect JAK2V617F allele burden in ET patients.

Thrombophilia, which severely impacts on morbidity and mortality of MPN patients, is variably characterized by microcirculatory disturbances, arterial and venous thromboses that often precede disease recognition including visual symptoms, ischaemic stroke and pulmonary embolism. A number of studies suggested leukocytosis as a novel marker for vascular risk [24, 25]. However, qualitative abnormalities of leukocytes, particularly polymorphonuclear leukocytes- the most abundant proportion of WBC, can occur in these diseases and contribute to the activation of the haemostatic system [26]. In this study, 28 patients (PV=6, ET=22) had thrombotic events prior to or at diagnosis. However, neither WBC counts nor JAK2V617F mutation burden appeared to be a risk factor for thrombosis in patients with PV and ET in this study.

It has been reported that the JAK2V617F mutant burden did not affect survival in MPN patients with the exception of advanced aged patients [21, 29]. In this current study, we also found that JAK2V617F mutation burden did not affect survival. Moreover, we found that no other prognostic variables affected survival including age. However, it should be noted that separated mononuclear cells were used in this study, and in some cases the cell population carrying the JAK2 mutation (mostly granulocyte fraction) might be excluded. Hence, the results of our study might have been compromised in certain. In the future, we planned to optimize our experiment system and achieve the accurate results.

This work was supported by grants from the Jiangsu Province of China (BRA2011218 and RC2011105), National Natural Science Foundation of China (Grant No.81270591) and Priority Academic Program Development of the Jiangsu Higher Education Institutions (PAPD).

15. Cheung B, Radia D, Pantelidis P, Yadegarfar G, Harrison C. The presence of the JAK2V617F mutation is associated with a higher haemoglobin and increased risk of thrombosis in essential thrombocythemia. Br J Haematol. 2006;132(2):244-245

29. Helbig G, Wieczorkiewicz A, Woźniczka K, Wiśniewska-Piąty K, Rusek A, Kyrcz-Krzemień S. The JAK2V617F tyrosine kinase mutation has no impact on overall survival and the risk of leukemic transformation in myelofibrosis. Med Oncol. 2012;29(4):2379-2384