Objective: Matrix metalloproteinases (MMPs), produced by osteoblasts, catalyze the turnover of extracellular matrix (ECM) molecules in osteoid, and the regulation of MMP activity depends on interactions between MMPs and tissue inhibitors of metalloproteinases (TIMPs). We focused on the degradation process of ECM in osteoid that was exposed to mechanical strain, and conducted an in vitro study using MC3T3-E1 osteoblastic cells to examine the effects of tension force (TF) on the expression of MMPs and TIMPs, and activation of mitogen-activated protein kinase (MAPK) pathways.

Design: Cells were incubated on flexible-bottomed culture plates and stimulated with or without cyclic TF for 24 hours. The expression of MMPs and TIMPs was examined at mRNA and protein levels by real-time RT-PCR and Western blotting, respectively. The phosphorylation of extracellular signal-regulated kinase (ERK) 1/2, p38 MAPK, and stress-activated protein kinases/c-jun N-terminal kinases (SAPK/JNK) were examined by Western blotting.

During orthodontic treatment, tooth movement occurs following alveolar bone remodeling induced by the application of therapeutic mechanical strain [1, 2]. Osteoblasts perform a central role in bone formation via high alkaline phosphatase activity and the production of collagenous and noncollagenous extracellular matrix (ECM) proteins [3-5]. Osteoblasts also produce osteoclast differentiation-related factors including inflammatory cytokines, prostaglandin E2, receptor activator of NF-кB ligand (RANKL), and osteoprotegerin, a natural inhibitor of RANKL [6]. Moreover osteoblasts also produce several kinds of proteinases [7] that are involved in the degradation of ECM proteins in osteoid, which is an important process for osteoclast attachment [8, 9]. Thus, osteoblasts regulate not only bone formation, but also bone resorption during the process of bone remodeling. In in vitro experiments using osteoblasts, several previous studies have suggested that mechanical loading, including continual compressive force and cyclic tension force (TF), can affect the expression of osteogenic [10-12] and osteoclast differentiation-related factors [13-15]. These studies were performed to clarify the role of osteoblasts in orthodontic force-induced bone remodeling. However, few studies have investigated the effects of mechanical loading on osteoblast proteinase expression.

Matrix metalloproteinases (MMPs) produced by osteoblasts are active at neutral pH and can therefore catalyze the turnover of ECM molecules [7, 16]. The MMP family can be genetically divided into six groups based on their specificity, sequence similarity, and domain organization: collagenases (MMP-1, -8, and -13), gelatinases (MMP-2 and -9), stromelysins (MMP-3, -10, and -11), matrilysins (MMP-7 and -26), membrane-type MMPs (MMP-14 and -17), and other MMPs [17, 18]. MMP activity depends on interactions between MMPs and tissue inhibitors of metalloproteinases (TIMPs) [18, 19]. Four mammalian TIMPs (TIMP-1, -2, -3, and -4) have been cloned, and their primary structures and functions have been analyzed [20-22]. MMP and TIMP expression is regulated by the mitogen-activated protein kinase (MAPK) pathway in many kinds of cells including fibroblast-like synoviocytes [23], chondrocytes [24], and osteoblasts [25].

We focused on the degradation process of ECM in osteoid that was exposed to mechanical strain, and conducted an in vitro study using MC3T3-E1 osteoblastic cells to examine the effects of tension force (TF) on the expression of MMPs and TIMPs. In addition, the effects of TF on MAPK phosphorylation of extracellular signal-regulated kinase (ERK) 1/2, p38 MAPK, and stress-activated protein kinases/c-jun N-terminal kinases (SAPK/JNK) in MC3T3-E1 cells were evaluated.

Briefly, cyclic TF was applied to MC3T3-E1 cells using a Flexercell Strain Unit (FX-3000, Flexcell Corp.), which mechanically strains the cells. MC3T3-E1 cells were seeded on flexible-bottomed six-well plates with a hydrophilic surface at a density of 2×104 cells/cm2 and then placed onto a vacuum manifold controlled by computer software and a solenoid valve. The system uses a vacuum source to apply a negative pressure causing a downward deformation of the membrane to which the cells are attached. The strain applied over the loading-post region was approximately equal in the radial and circumferential directions [26]. Cells were flexed at 6 cycles/min (5 s strain, 5 s relaxation) for 0, 4, 8 or 12% TF for 24 hours. TF strength was determined based on previous studies [12, 27-29] using the Flexercell Strain Unit. Controls were prepared in an identical manner and cultured on unstrained flexible-bottomed plates.

Total RNA was isolated from TF-stimulated or unstimulated cells using NucleoSpin RNA (Takara Bio, Shiga, Japan), and isolated RNA was treated with DNase. The amount of DNase-treated RNA was measured using a NanoDrop 1000 (ND-1000; Thermo Fisher Scientific, Wilmington, DE, USA) and was converted into complementary DNA (cDNA) using an RNA PCR kit (PrimScript; Takara Bio). The cDNA (0.2 μg/2 μL) was subjected to real-time PCR using SYBR Green I dye. Reactions were performed in 25 μL SYBR® premixed Ex Taq™ solution (Takara Bio), containing 20 μM sense and anti-sense primers (Table 1). The PCR assays were performed on a Smart Cycler (Cepheid, Sunnyvale, CA, USA) and analyzed using Smart Cycler software. The PCR protocol for MMPs, TIMPs and glyceraldehyde 3-phosphate dehydrogenase (GAPDH), consisted of 30 cycles of 95 °C for 3 s and 60 °C for 20 s. All real-time RT-PCR experiments were performed in triplicate, and the specificity of the PCR products was verified by melt curve analysis. The expression levels of MMPs and TIMPs were normalized to that of GAPDH.

To investigate the role of ERK1/2 and SAPK/JNK signaling on MMP and TIMP expression in MC3T3-E1 cells, the cells were treated with the ERK inhibitor PD98059 (10 µM; Merck Millipore) or the JNK inhibitor SP600125 (1 µM; Sigma Aldrich). In the JNK inhibitor experiment, cells were treated with SP600125 for 1 hour prior to TF loading. The concentration of each inhibitor used was based on the manufacturer's instructions and a previous report [25]. Cell status was examined using inverted light microscopy, and mRNA levels were then determined by real-time RT-PCR.

Each value is reported as the mean ± standard deviation (SD). Significant differences were determined using a student's t-test or one-way analysis of variance (ANOVA) followed by Tukey's multiple comparison test. Differences with a p value <0.05 were considered statistically significant.

Effect of TF on MMP and TIMP mRNA expression

PCR primers used in the experiments. 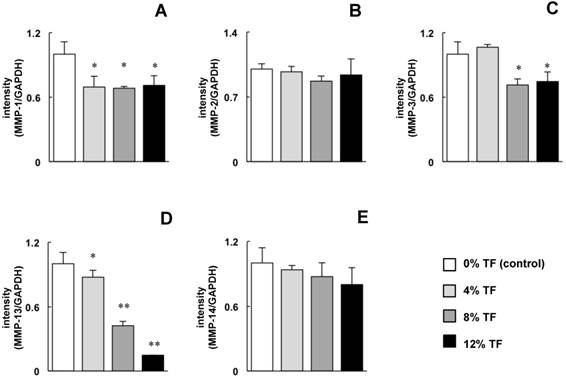 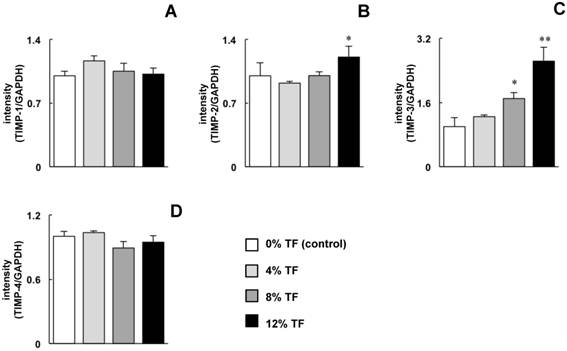 Effect of TF on MMP and TIMP protein expression 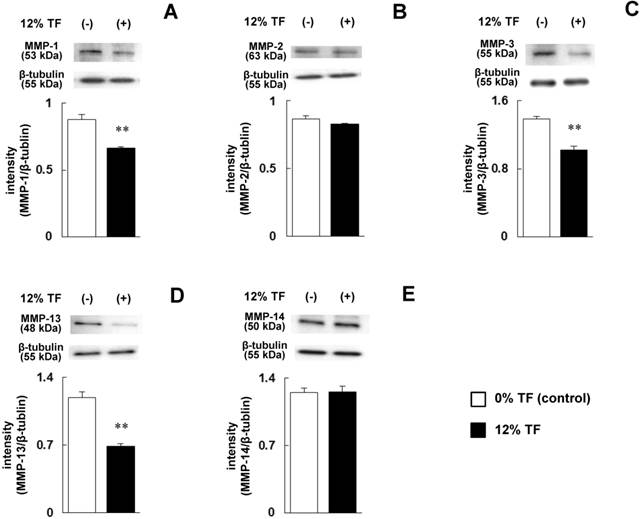 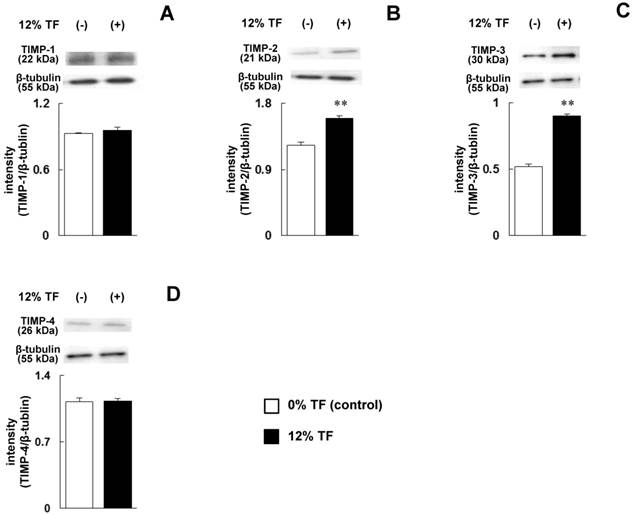 Effect of TF on the phosphorylation of ERK1/2, p38 MAPK, or SAPK/JNK

The decrease in ERK1/2 phosphorylation and the increase in SAPK/JNK phosphorylation may be involved in the downregulation of MMP-1, -3, and -13 and the upregulation of TIMP-2 and -3 by TF. To examine these effects more closely, MC3T3-E1 cells were treated with an ERK1/2 specific inhibitor to mimic the TF-induced decrease in ERK1/2 phosphorylation, and the effects of this inhibitor on MMP expression were determined by real-time RT-PCR. Compared with untreated cells, MMP-1, -3 and -13 expression was decreased in cells treated with PD98059 (Figure 6A-C); however, PD98059 did not affect the expression of TIMP-2 or -3 (Figure 6D and E). Next, the effects of the JNK inhibitor SP600125 were determined in cells that were exposed to TF. SP600125 completely inhibited the TF-induced upregulation of TIMP-2 and -3 (Figure 7D and E) but had no effect on the downregulation of MMP-1, -3 or -13 (Figure 7A-C). 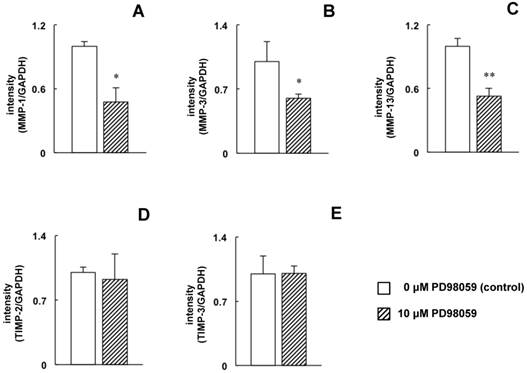 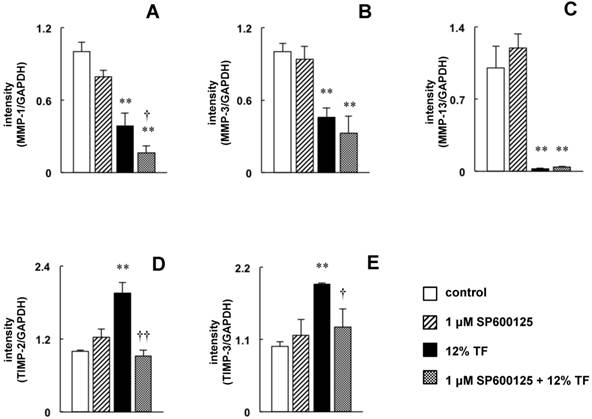 Certain amounts of mechanical strain have been indicated to enhance the osteogenic functions of osteoblasts; however, excessive mechanical strain can suppress function. Jacobs et al. [28] reported that 5% TF induced an increase in type I collagen expression and alkaline phosphatase activity, while 10% TF decreased the expression and activity in human osteoblasts. Fushiki et al. [29] found that calcified nodule formation was reduced when 18% TF was applied to rat calvarial progenitor cells. Kariya et al. [12] reported that 6% and 18% TF induced the expression of Runx2 and Osterix in MC3T3-E1 cells, both of which are osteoblast differentiation-related transcription factors. They also reported that TF-induced upregulation of Runx2 and Osterix expression was significantly higher after 6% TF compared with 18% TF, and that 6% TF also increased alkaline phosphatase activity, ECM protein expression, and calcium content of calcified nodules. Based on these previous studies [12, 28, 29], we hypothesized that when TF enhances the osteogenic function of osteoblasts, osteoblasts' proteolytic processes may be suppressed, which overall may lead to bone production rather than bone resorption. In this study, the application of 4, 8 or 12% TF to MC3T3-E1 cells resulted in decreased expression of MMP-1, -3 and -13 and increased expression of TIMP-2 and -3. MMP-1 and -13 function mainly as collagenases and can cleave undenatured type I collagen, the most abundant protein present in the osteoid layer, into characteristic 3:1 length fragments. In contrast, MMP-3 functions mainly as stromelysin-1 and degrades proteoglycan, gelatin, and other non-collagenous proteins [7, 18]. TIMP-2 and -3 inhibit these proteases; TIMP-2 binds to multiple MMPs, and TIMP-3 binds to the ECM proteins [18, 19]. Thus, the results from the present study indicate that, as expected, proteolytic processing is totally inhibited when osteoblasts are subjected to cyclic TF.

Two previous studies conducted by Yang et al. [34] and Li et al. [43] reported that TF increased MMP-13 mRNA and protein expression. Yang et al. [34] reported that when 8% TF was applied to MC3T3-E1 cells for up to 4 hours, MMP-13 mRNA and protein expression levels increased after 30 minutes and plateaued after 1 hour. The results from the present study and that of Yang et al. [34] indicate a difference between short-term (30 min) and long-term (24 hours) TF treatment in osteoblasts, in that short-term treatment increases, and long-term treatment decreases MMP-13 expression. In contrast, Li et al. [43] reported that the effect of TF on MMP-13 expression was dependent upon TF magnitude in MC3T3-E1 cells exposed to 6, 12, and 18% TF for 24 hours. The reason for the differing results regarding TF effect on MMP-13 between the present study and that by Li et al. [43] is unknown. However, previous studies have suggested that serum concentration may affect the expression of multiple genes, including MMPs, in cultured cells [44]. In this study, culture medium containing 10% FBS was used for cell growth, maintenance, and stimulation, while Li et al. [43] reduced the concentration of FBS from 10% to 1% during TF treatment. This may be a minor difference; however it is possible that different FBS concentrations may affect MMP-13 expression.

Several studies have reported that TF induces downregulation of MMP-1, -3, and -13, and upregulation of TIMP-2 expression in synovial cells [23, 45] and tenocytes [46, 47]. In the present study, the TF-induced downregulation of collagenase (MMP-1, and -13) and stromelysin (MMP-3) expression and the upregulation of their natural inhibitors (TIMP-2 and -3) were confirmed in osteoblasts. The removal of collagen and non-collagenous protein from the bone surface is important for osteoclast attachment [8, 9]. Tang et al. [48] also previously reported that TF induced a decrease in the expression of RANKL, an essential cytokine for osteoclast differentiation, and an increase in the expression of osteoprotegerin, a decoy receptor of RANKL [6] in MC3T3-E1 cells. Both the present results and those of Tang et al. [48] suggest that TF not only suppresses the differentiation of osteoclasts but also their attachment to the TF-exposed bone surface.

In conclusion, the results suggest that TF suppresses the degradation process that occurs during ECM turnover in osteoid via decreasing MMP-1, -3 and -13 expression and increasing TIMP-2 and -3 expression through the MAPK signaling pathway in osteoblasts.

Yoko Karasawa: conceptualized and designed the study and experiments, performed the experiments, analyzed and interpreted the data, and wrote the manuscript.

Hideki Tanaka: designed the experiments, interpreted the data, provided reagents and materials, and reviewed the manuscript.

Kumiko Nakai: designed the experiment, analyzed the data, and provided materials and reagents.

Natsuko Tanabe: interpreted the data and reviewed the manuscript.

Takayuki Kawato: conceptualized and designed the study and experiments, analyzed and interpreted the data, and wrote the manuscript.

Masao Maeno: Conceptualized and designed the study, provided reagents, materials and equipment, interpreted the data, and reviewed the manuscript.

Noriyoshi Shimizu. Conceptualized and designed the study, provided equipment, interpreted the data, and reviewed the manuscript.