Background: This study investigated the roles of progesterone and leptin in placenta invasion, which is closely related to pregnancy prognosis. We examined the effects of leptin and progesterone on the invasion of BeWo cells, a human trophoblastic cell line, and the effect of concurrent treatment.

Methods: Cells were treated with leptin (0, 5, 50, or 500 ng/mL) or progesterone (0, 2, 20, or 200 µM) and cultured in an invasion assay. Cells treated with 500 ng/mL leptin were also treated with progesterone (0, 2, 20, or 200 µM) in the invasion assay for 48 h. The number of cells that invaded the lower surface was counted in five randomly chosen fields using a light microscope with a 200× objective. The mRNA expression levels of MMP-9, TIMP1, TIMP2, and E-cadherin were detected by semi-quantitative PCR.

Results: Invasion of BeWo cells was promoted by leptin and influenced by both leptin concentration and treatment duration. Invasion was most effective at 500 ng/mL leptin and 48 h culture. Leptin-induced invasiveness was suppressed by progesterone in a dose-dependent manner. Leptin significantly decreased the expression levels of TIMP1 and E-cadherin, whereas progesterone significantly decreased expression of MMP-9 and significantly increased levels of TIMP1, TIMP2, and E-cadherin.

Conclusions: Leptin promotes invasion of BeWo cells, and progesterone suppresses leptin-induced invasion by regulating the expressions of MMP-9, TIMP1, TIMP2, and E-cadherin. The balance between leptin and progesterone may play an important role in human placenta formation during early pregnancy.

The process of placental invasion into the uterus during the early stage of pregnancy is essential for a successful pregnancy. Invasion actively occurs during weeks 8-16 of pregnancy, and invasion of extravillous trophoblasts into the maternal decidual spiral artery lowers the resistance of uterine blood flow, increasing blood flow into the uterus up to 40-fold. If invasion is insufficient to decrease resistance, growth retardation in utero or preeclampsia may occur because the blood flow increase to the uterus is disrupted and placental function deteriorates [1, 2]. This theory is supported by the observation of shallow intrauterine invasion and almost no permeation into the maternal decidual spiral artery in the placenta of a pregnant woman affected by growth retardation in utero and preeclampsia. Excessive placental invasion into the myometrium is also problematic, as it causes placenta accreta. Accreta is a condition that prevents separation of the placenta from the uterus after delivery, which causes a large amount of bleeding and can lead to transfusion, hysterectomy, or maternal death. Therefore, the invasion process must be balanced between acceleration and suppression. However, the control mechanisms for placenta invasion are not clearly understood. Defining the mode of placenta invasion will ultimately contribute to understanding the causes of these diseases related to dysregulation of invasion. Previous studies suggest that leptin is expressed 50-fold higher in the placenta during early pregnancy relative to late pregnancy and that leptin receptor is found in extratrophoblasts, which promotes placenta invasion during early pregnancy [3, 4].

In this study, we examined the effect of leptin on invasion of BeWo cells, a human trophoblastic cell line, and the effect of concurrent treatment with both leptin and progesterone.

Total RNA was extracted from 100 mg placenta tissues using an RNA Extraction Kit (Qiagen, Hilden, Germany) according to the manufacturer's protocol. RNA concentration and purity were assessed using a NanoDrop. cDNA was processed using RT Master Premix (Elpis, Daejeon, Korea) in 20 µL total volume. The following primer sequences were used (forward and reverse, respectively): MMP-9, 5′-TCTATGGTCCTCGCCCTGAA-3′ and 5′-CATCGTCCACCGGACTCAAA-3′; TIMP1, 5′-TCTGCAATTCCGACCTCGTC-3′ and 5′-CTGTTCCAGGGAGCCACAAA-3′; TIMP2, 5′-AGCTTTGCTTTATCCGGGCT-3′ and 5′-ATGCTTAGCTGGCGTCACAT-3′; E-cadherin, 5′-TCATGAGTGTCCCCCGGTAT-3′ and 5′-TCTTGAAGCGATTGCCCCAT-3′; β-actin, 5′-GTGGGGCGCCCCAGGCACCAGGGC-3′ and 5′-CTCCTTAATGTCACGCACGATTTC-3′. Each primer was added at a final concentration of 0.5 μM to a 10 μL PCR Master mixture (Promega, WI, USA). An initial denaturation step was conducted for 5 min at 95 °C, and 35 cycles of denaturation at 94 °C for 30 s, annealing at 53-62 °C for 30 s (MMP-9: 62 °C, TIMP1: 55.4 °C, TIMP2: 60 °C, E-cadherin: 53 °C, β-actin: 62 °C), and extension at 72 °C for 30 s were followed by a final extension of 10 min at 72 °C. Ethidium bromide-stained bands were visualized by UV transillumination, and the fluorescence intensity was quantified using Quantity One (Bio-Rad, CA, USA). RT-PCR data were collected from at least five independent experiments (Table 1).

All experiments were repeated at least three times, and data are presented as the mean ± SD unless noted otherwise. All statistical analysis was performed by SAS version 8 (SAS Institute Inc., Cary, USA). Differences between data groups were evaluated for significance using ANOVA and sample t-test. P-values less than 0.05 indicate statistical significance.

Stimulation of BeWo cell invasion potential with leptin. BeWo cells cultured in the absence or presence of leptin (5, 50, or 500 ng/mL) were subjected to the invasion assay. After 48 h, cells were stained with hematoxylin-eosin (A, 0 ng/mL; B, 5 ng/mL; C, 50 ng/mL; D, 500 ng/mL), and the number of invasive cells was counted in five fields per sample (×200). Significance versus vehicle-treated cells: **P < 0.01.

Suppression of BeWo cell invasion potential by treatment with 500 ng/mL leptin and progesterone. Cells were cultured with different progesterone concentrations (2, 20, and 200 µM) and subjected to the invasion assay. After 48 h, cells were stained with hematoxylin-eosin (A, 0 µM; B, 2 µM; C, 20 µM; D, 200 µM), and the number of invasive cells was counted in five fields per sample (×200). Significance versus the leptin-only treatment: *P < 0.05, **P < 0.01. 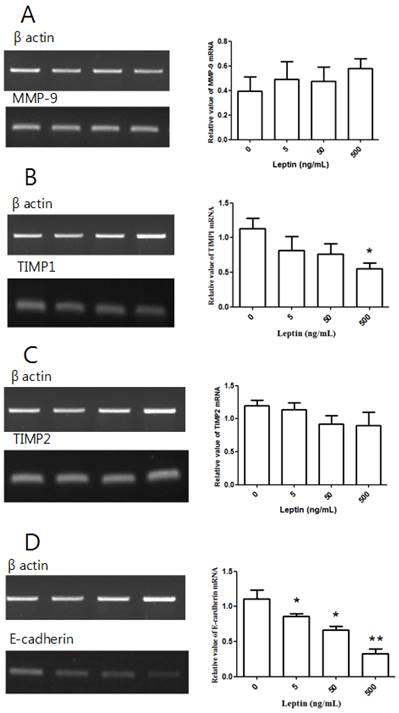 In this study, leptin suppressed TIMP1 mRNA expression. TIMP1 mainly suppresses MMP-9 activity. MMPs decompose type IV collagen, which is a major component of basal membranes, thereby causing invasion. MMP-9 is particularly crucial for placental invasion [9, 10]. A recent study found that leptin increases MMP-9 activity [11]. Our results suggest that this effect on MMP-9 arises from TIMP1 suppression. Although the effect of leptin on TIMP1 in trophoblasts has not been studied, leptin was previously shown to reduce expression of TIMP1 mRNA in cardiomyocytes [12].

In this study, we demonstrated with a cell invasion assay that leptin promotes invasion of BeWo choriocarcinoma cells and that progesterone suppresses this leptin-induced invasion. This suggests that the balance between leptin and progesterone may play an important role in formation of the human placenta during early pregnancy. Furthermore, our RT-PCR results suggest that leptin promotes invasion by reducing TIMP1 and E-cadherin levels and that progesterone regulates MMP-9, TIMP1, TIMP2, and E-cadherin expression. Future research on the human placenta will be necessary to investigate this possibility and develop clinical applications for the results.

YSJ and SJK conceived the study, performed the statistical analysis, and drafted the manuscript.

GSRL and SYN performed some of the experiments. All authors have read and approved the final manuscript.

Yun Sung Jo is currently a Ph. D. student under the supervision of Prof. Sa Jin Kim. She has coauthored over 10 publications. Her current research focuses on pentraxin 3 in complicated pregnancy cases.