Association of Salivary Helicobacter pylori Infection with Oral Diseases: a Cross-sectional Study in a Chinese Population

Objective: The aim of this study was to detect the prevalence of oral H.pylori among adults and to investigate the correlation between H.pylori infection and common oral diseases.

Conclusions: Oral H.pylori infection is common in adult Chinese, which is significantly associated with oral diseases including periodontal diseases and caries.

Helicobacter pylori (H. pylori) is a Gram-negative and microaerophilic bacterium mainly colonizes the gastric mucosa and also detected in different niches of oral cavity [1,2]. Affecting 20-50% of people in industrialized nations and up to 80% of people in less-developed countries [3], H.pylori infection has been a worldwide threat to human health.

Numerous studies have confirmed the promoting role of H.pylori infection in the development of gastritis, peptic ulcers and gastric malignancies [4]. Considering oral cavity is a potential extragastric reservoir for H. pylori and may be source of infection, re-infection and transmission [2], researchers also made efforts to explore the association between H.pylori infection and oral diseases. High prevalence of oral H. pylori was detected in patients with periodontitis, poor periodontal health characterized by advanced periodontal pockets, as well as the present of plaque and gingival bleeding [5-7]. H. pylori DNA could be found in separate oral mucosal ulcers in apparently immunocompetent adults [8]. A retrospective study also suggested that H. pylori-infected children had an increased risk of dental caries [9].

Despite much evidence suggesting the link of H.pylori infection and oral diseases, few studies found no significant correlations between frequencies of H. pylori and dental hygiene, dental caries, periodontal diseases, use of dentures or development of recurrent aphthous stomatitis [10-12].

To date, on the basis of inconsistent findings, whether colonization of H. pylori in the oral cavity is responsible for oral diseases is still controversial. The conflicting results in published works may be due to small subjects population, sample collection and inadequate detection methods for H. pylori infection. We therefore performed a cross-sectional study among 1050 adults Chinese who took their oral healthy examination and used the saliva H.pylori antigen test (HPS) as detection criterion in the purpose of investigating the relationship between H.pylori infection and common oral diseases including periodontal diseases, caries and recurrent aphthous stomatitis.

From March 2013 to June 2013, subjects who took their oral healthy examination at The First Affiliated Hospital, Zhejiang University School of Medicine, China were recruited and selected for this study. Exclusion criteria included age < 18 years; treatment with antibiotics, H2 receptor blockers, bismuth or proton pump inhibitors within four weeks of study enrollment; a past history of oral diseases therapy in the recent 6 months; current pregnancy. Informed consent was obtained from all the subjects and the study protocol was approved by the Hospital Ethics Committee.

A total of 1050 eligible subjects were enrolled in the study, which consisted of 525 males and 525 females. All the subjects were assessed for oral diseases by dental examination. Diagnosis of oral diseases including periodontal diseases, caries and recurrent aphthous stomatitis were based on the following criteria:

(2) Caries: Defined as different stages of dental caries including caries limited to enamel, caries of dentine and caries of cementum [14]. Treated caries without secondary caries were excluded.

(3) Recurrent aphthous stomatitis: The diagnosis was based on clinical findings: history of recurrent oral ulcers beginning in an early age and the presence of multiple round or ovoid oral ulcers on physical exam[15]. Exclusion criteria including: 1) systemic diseases, Behcet's syndrome and Inflammatory bowel disease, for example. 2) Patients who reported a history of recurrent aphthous stomatitis but in the healing stage were also excluded from the study.

Subjects without finding of oral diseases were selected as the control group.

Information about general conditions, history of gastric ulcer was obtained and samples of saliva were collected for further analysis.

No food or drink was allowed 1 h before the test. Subjects were asked to spit at least 0.5 ml saliva to the sampling cup and the collected saliva should be tested within 5 minutes after sampling for reducing the external influence on the results.

To perform the test, we added four drops of saliva and two drops of PBS to the cuvette using a pipette afterward. After mixing adequately, a new pipette was used to transfer four drops of the mixture into the sample well of the test cassette.

The sample flowed through a label pad containing H. pylori antibody coupled to red-colored colloidal gold. If the sample contained H.pylori antigens, the antigen would bind to the antibody coated on the colloidal gold particles to form antigenantibody-gold complexes. The complexes then moved on a nitrocellulose membrane by capillary action toward the test zone. A second control line always appeared in the result window to indicate that the test had been correctly performed and that the test device was functioning properly. The results were observed within 20-30 minutes [17].

H.pylori antigen test results in male and female. χ2 test showed that the differences of H.pylori positive rates between male and female participants were not statistically significant (59.62% vs. 60.95%, χ2=0.195, P>0.05). 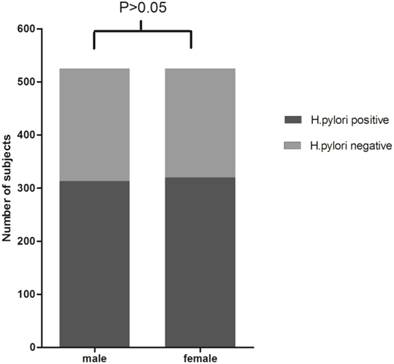 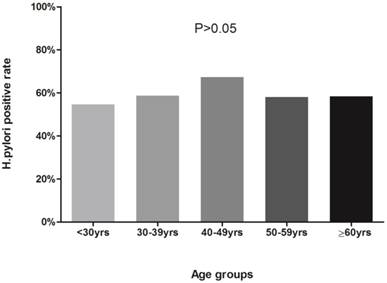 Results of H.pylori antigen test in subjects with or without a history of gastric ulcer n (%)

Overall, we found 853 (245+606+2) cases of periodontal diseases, 275 (245+30) cases of caries and 10 (2+8) cases of recurrent aphthous stomatitis which presented as minor aphthae localized on labial mucosa (5 patients), tongue (2 patients) and buccal mucosa (3 patients). The rest 135 subjects without finding of any oral diseases were selected as the control group.

4) factors and risk of H.pylori infection

According to the χ2 test, no significant associations were seen between gender or age and H. pylori infection in the Chinese adults (P>0.05). Oral diseases including periodontal diseases (OR 1.473;95% CI 1.021 to 2.124) and caries (OR 1.717; CI 1.127 to 2.618) were associated with an increased risk of H. pylori infection. However, presenting with recurrent aphthous stomatitis was not a significant risk factor. Moreover, having history of gastric ulcer increased the risk of H.pylori infection in Chinese adults (OR 1.631; 1.164 to 2.285). (Table 2)

Factors and risk of H.pylori infection

In addition to the promoting role of H.pylori infection in the development of gastrointestinal diseases [4], accumulating experimental and clinical evidence has also implicated the association between H.pylori and some diseases localized outside the stomach, such as skin diseases [18,19], gynecological diseases [20], blood system diseases [21,22], cardiovascular diseases [23,24], as well as oral diseases [8,9,25].

Since Krajde [26] isolated H. pylori from dental plaque in 1989, successfully detection of H. pylori from dental plaque, saliva, dorsum of the tongue, surface of oral ulcerations or oral neoplasia strongly suggested that oral-oral route was important transmission modes of H. pylori, and that the oral cavity was a potential extragastric reservoir for H. pylori [2]. Despite the works performed by previous researchers trying to answer whether there is an association between H.pylori infection and oral diseases, this question remains unclear.

In the present study, we demonstrated the groups divided by age showed no significant differences in their H.pylori positive rates, which suggested that age were not the influence factors of H.pylori infection. This finding is contrary to the other studies illustrating the prevalence of infection increased with age [27]. It could be explained by all the participants we selected were adults and we divided the groups into less than 30 years old, 30~39 yrs, 40~49 yrs, 50~59 yrs and ≥60 yrs, while H.pylori colonization is acquired early in life (almost always before the age of 10 years), and in the absence of antibiotic therapy it generally persists for life [4,28,29].

Our study found the prevalence rates of oral H.pylori in patients with periodontal diseases and caries were significantly increased than control group. These results indicating that saliva H.pylori positive is closely associated with the occurrence and development of oral diseases, which are consistent with the findings in previous studies. Souto et al [5] observed a significantly higher prevalence of H. pylori in the saliva and subgingival samples from subjects with periodontitis (23.5% and 50%, respectively) compared to samples from periodontally healthy subjects (7.3% and 11.4%, respectively; P <0.05). Silva et al [7] observed a positive link between H.pylori infection and periodontal diseases. Dye et al [6] also suggested that poor periodontal health, characterized by advanced periodontal pockets, may be associated with H.pylori infection in adults. An retrospective study conducted in Finland reviewed the public dental health service files of children suggested that H. pylori-infected children have an increased risk of dental caries [9].

Furthermore, considering the strong correlation between H.pylori infection and gastric ulcer, we also analyzed the positive rates of oral H.pylori with or without history of gastric ulcer, and found the differences were statistically significant (69.47% vs 58.26%, P<0.05). This finding is consistent with the results shown by Namiot et al [30] that poor oral health was associated with the prevalence of peptic ulcers not related to NSAIDs consumption. Possible explanations are that oral cavity is an extragastric reservoir of H.pylori and reflects the gastric infection conditions, which is unquestionable the risk factor of gastric ulcer [2,4]. Many of the pathogenic strains are shared in dental plaque and gastric mucosa [31]. Patients who are oral H.pylori-positive have a lower success rate of gastric H. pylori eradication than patients who test negative for oral H.pylori [2] and both mouthrinse and periodontal treatment can improve the eradication rate of gastric H. pylori [17].

A limitation of this study is that other oral diseases including lichen planus, pericoronitis and glossitis have not been discussed, mainly due to relatively insufficient amount of subjects for further statistical analysis. What's more, given the observation nature of our study, it is not possible to conclude that the positive association between H.pylori in saliva and oral diseases reflects cause and effect. Further studies of large sample size on the involvement of mechanism of H.pylori infection in oral diseases, which may be beneficial to the new prevention and treatment of periodontal disease, caries and even gastric ulcer are needed.