Exposure to high environmental temperature leading to increased core body temperature above 40°C and central nervous system abnormalities such as convulsions, delirium, or coma is defined as heat stroke. Studies in humans and animals indicate that the heat shock responses of the host contribute to multiple organ injury and death during heat stroke. Heme oxygenase-1 (HO-1)—a stress-responsive enzyme that catabolizes heme into iron, carbon monoxide, and biliverdin—has an important role in the neuroprotective mechanism against ischemic stroke. Here, we investigated the role of endogenous HO-1 in heat-induced brain damage in rats. RT-PCR results revealed that levels of HO-1 mRNA peaked at 0 h after heat exposure and immunoblot analysis revealed that the maximal protein expression occurred at 1 h post-heat exposure. Subsequently, we detected the HO-1 expression in the cortical brain cells and revealed the neuronal cell morphology. In conclusion, HO-1 is a potent protective molecule against heat-induced brain damage. Manipulation of HO-1 may provide a potential therapeutic approach for heat-related diseases.

The phenomenon of global warming is becoming increasingly serious [1]. One of the consequences of the global warming is an increase in the frequency and intensity of heat waves. Exposure to extremely hot environment (such as among fire fighters, miners, or during a military training) or hot weather can induce heat-related diseases such as heat cramps, heat exhaustion, and heatstroke (HS). HS is defined clinically as a condition when core body temperature rises above 40ºC (hyperthermia) and is accompanied with the central nervous system abnormalities and multi-organ dysfunction [2]. The relative risk for 1-year mortality of hyperthermic versus normothermic patients was 3.4 (95% confidence interval, 1.6 to 7.3) in a cohort study [3], and survivors may remain with the neurologic injury after discharging from the hospital [4]. During the past decade, research showed that HS results from thermoregulatory failure coupled with altered expression of heat shock proteins [5].

Heme oxygenase-1 (HO-1), also named heat shock protein 32, is an important enzyme that degrades heme, a pro-oxidant, leading to the formation of antioxidant molecules [6]. Enzyme reaction of HO-1 generates biliverdin, carbon monoxide (CO), and divalent iron as products, each of which is biologically active and ameliorates the oxidative susceptibility of cells through distinct mechanisms [7]. Previous studies indicated that pretreatment with HO-1 induction material or its gene transfection markedly protects cells and tissues against oxidative damages in vitro and in vivo [8-9]. Although many studies showed the evidence of protective role of HO-1 in their investigations [9], a recent study revealed another data that suggest HO-1 aggravates heat stress-induced neuronal injury in cerebellar Purkinje cells [10]. Hence, this study aims to investigate whether HS induces HO-1 and the location of HO-1 expression in the brain.

Induction of HO-1 mRNA in brain tissue after HS

As shown in Figure 1, we investigated HO-1 expression levels of mRNA in the rat brain after HS. Heat exposure caused a significant induction of HO-1 after HS0. Image analysis of ethidium bromide stained gels indicated that the level of HO-1 mRNA began to increase in HS0 rats and returned to normal in HS6 rats. In addition, quantitative results of RT-PCR (n = 5 in each group) exhibited a similar time course of HO-1 expression. RT-PCR results revealed that levels of HO-1 mRNA peaked at 0 h (2.81 ± 1.25-folds, compared with sham rats) after heat exposure and returned to basal level at 6 h (0.59 ± 0.6-folds, compared with sham rats). 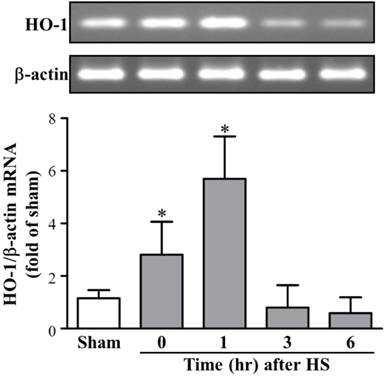 A previous study has shown that the mRNA levels of HO-1 and heat shock protein 70 showed different expression time profiles with a tissue-specific distribution in brain tissues in a gram negative bacterial lipopolysaccharide-induced sepsis [11]; it suggested that the gene expression of these heat shock proteins is separately regulated. The up-regulation of these cytoprotective genes in a specific tissue such as that in the kidney could prevent tissue damage during the period of brain death, and it could be the part of a protective or recuperative mechanism induced by brain death-associated stress [12]. In a rat vasospasm model, researchers reported that the HO-1 mRNA expression was prominently induced in the basilar artery and other brain tissues. They also demonstrated that HO-1 gene induction in cerebral vasospasm after subarachnoid hemorrhage protects against cerebral vasospasm [13].

Protein expression of HO-1 in brain tissue after HS

We further examined the HO-1 protein expression levels in rat brains after HS. As shown in Figure 2, the western blot data (n = 5 in each group) also showed a significant increase in protein levels of HO-1 in HS1 rats (5.30 ± 0.30-folds, as compared with sham rats) and sustained levels in HS3 rats (4.43 ± 0.41-folds, compared with sham rats). Therefore, the time course of steady state levels for HO-1 protein in animals that underwent HS showed that a sustained increase in HO-1 protein was expressed during the observation period of up to 6 hours. 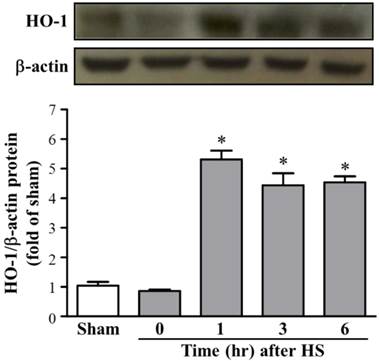 In the present study, the HO-1 mRNA levels increased at 0 h after HS challenge and continued to rise until 1 h, returning to the control level by 3 h after the HS. The HO-1 protein expression level was significantly increased during 1 to 6 h after HS challenge. The time course of HS-induced steady state mRNA and protein levels of HO-1 in the brain are rational and consistent with previous study that has demonstrated the expression pattern of HO-1 in hemorrhagic hypotension and resuscitation-exposed rat livers [14]. HO-1 metabolizes heme to CO, ferrous ion, and biliverdin. CO could promote vasodilation by activating cGMP, and bilirubin, derived from biliverdin, could also serve as an anti-oxidant, both of which may contribute to the reported protective role of HO-1 in cerebral ischemia and subarachnoid hemorrhage [15].

Observation of HO-1 expression in cortical brain after HS

In conclusion, we found a remarkable level of HO-1 mRNA and protein upregulation and its time course in the brain tissue, which may have been closely correlated with the occurrence of delayed brain damage after the heatstroke. As neuroprotective strategy, the therapeutic gene modulation of HO-1 may represent a novel approach for the prevention and treatment of such HS-induced pathologic conditions.

Adult male Sprague-Dawley rats (10-12 weeks old) were purchased from the Animal Resource Center of the National Science Council in the Republic of China (Taipei, Taiwan) and housed in the National Defense Medical Center's Center for Laboratory Animal Care. Animals were allowed ad libitum access to food and water, and they were kept in a 12-h day-night cycle. All experimental protocols were approved by the Animal Use and Care Committee of the National Defense Medical Center (Taipei, Taiwan) in accordance with the NIH guidelines for the care and use of laboratory animals. 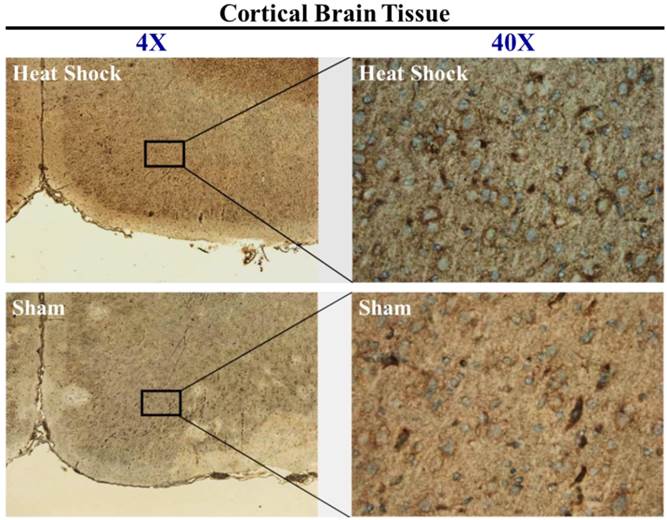 We have previously established an animal model of HS [16]. In brief, rats were anesthetized by a single intraperitoneal dose of urethane and pentobarbital (0.6 g/kg and 30 mg/kg, respectively). A thermocouple probe was inserted into the rectum for continuous monitoring of the core temperature (Tco), the right femoral artery was cannulated with polyethylene tubing (PE 50) for blood pressure monitoring, and a pressure transducer was inserted into the cannula for continuous monitoring of both mean arterial pressure and heart rate. Rats were subsequently exposed to an ambient temperature of 40°C in a heating chamber until Tco reached 40.5°C (HS onset). After heat exposure, rats were transferred from the heating chamber to an animal cage (room temperature: 25°C), where they remained for various periods of time, permitting the recovery of the core temperature to normal. The recovery time is determined as the number of hours after HS onset: HS3 refers to a condition 3 h after HS onset. HS and normothermic sham rats were sacrificed after various recovery periods with an overdose of urethane.

Brain slicing was preformed after completion of the experiment. The obtained brain specimens were excised and fixed in 4% paraformaldehyde. Paraffin-embedded brain tissues were cut at a thickness of 2-5 μm. Parts of these tissues were stained with hematoxylin and eosin for histological examination, and other parts were used for immunohistochemical staining (NovoLink polymer detection system; Leica Biosystems Newcastle Ltd, UK). A semiquantitative study of immunohistochemical staining was performed using image software (Image scope Ver. 10.2.2.2319; Aperio Technologies, Inc., Vista, CA, USA).