It is well known that orthodontic appliance causes mechanical stress on the periodontal tissues leading to teeth movement. Aside from bone deposition by osteoblasts and bone resorption by osteoclasts, various studies have been done on periodontal tissue remodeling during orthodontic teeth movement. However, studies on the origin of the fibroblast as well as the cell count in response to orthodontic teeth movement are only very few. Tomida et al. (1) focused on the pluripotency of bone marrow derived cells (BMDCs), since studies have mentioned their migration to the periodontal ligament (PDL) after receiving mechanical stress. In addition, Muraoka et al. (2) revealed that BMDCs migrate into the PDL and differentiate into macrophages, osteoclasts, etc.

In the present study, we focused on the histopathological evaluation of cells in periodontal tissue remodeling caused by mechanical stress during orthodontic teeth movement. Furthermore, the source of cells was identified using GFP bone marrow transplantation mouse model by examining GFP-positive cell count immediately after mechanical stress until 6 months. Immunofluorescent double staining was carried out to identify the type of cells, which BMDCs have differentiated.

Periods and Number of Experimental Animals (ddY and GFP)

The animals were subjected to 4.0 % Isofluorane inhalation anesthesia (Isoflu: Animal Science Department, Dainippon Sumitomo Pharma Co., Ltd. Osaka, Japan), which is a mixture of gas and air. The gas anesthesia system (DS Pharma Biomedical Co., Ltd. Laboratory Products, Osaka, Japan) used is for small laboratory animals with adjustable gas concentration and controlled flow rate in order to place the animals under stable condition. After adequate anesthesia was obtained, the mouse was fixed on a handmade bench in a sitting position and the nose attached to a suction hole to maintain general anesthesia. Isofluorane inhalation anesthesia was set to maintain the general anesthesia at a concentration of 1.0 % throughout the experiment. To keep the mouth open during experiment, the maxilla was fixed by tying the upper incisors to the upper part of the bench and the mandible was fixed by applying rubber on the lower incisors to the lower part of the bench. Following Waldo's method, the separator was inserted to induce mechanical stress on the PDL of maxillary molar. The separator used was a rubber dam sheet (Ivory, Premium Rubber Dam Pure Latex: Heraeus Kulzer, GmbH & Co. KG, Hanau, Germany), cut into approximately 2x2 square and folded into two. The mouse has 3 maxillary molars on each side numbered as maxillary first molar (M1), second molar (M2), third molar (M3). M1 and M2 have 3 roots and M3 has 2 to 3 roots. The separator was inserted between M1 and M2 and left for 3 hours in order to induce mechanical stress and compression of the PDL. When mechanical load was released, the maxilla with the molar and PL tissue were excised 3 days and 1 week later.

In GFP bone marrow transplanted mice, mechanical load was applied for 3 hours in the same manner as above. After 24 hours, 1 week, 2 weeks and 6 months, the portion of the maxillary periodontal tissue was excised from the maxilla.

For the control or non-treated group, the opposite side of the maxillary molar PDL was used. The distal side of the buccal roots of M1 was used as the observation site. The experiment was carried out following the animal experimental guidelines of the ethics committee of Matsumoto Dental University.

After excision, the tissues were placed in 4 % paraformaldehyde with 0.05 M phosphate buffer fixing solution for 24 hours and then demineralized in 10 % EDTA solution for 3 weeks. Then after, the specimens were embedded in paraffin; serial sections were made with a thickness of 5mm horizontally to the PDL, stained with HE and examined under the light microscope. To confirm the cell count in the PL on the pressure and tension sides, the entire tissue was carefully examined for cell morphology and areas with minimal changes were chosen. Then after, cell count in square pixels using Adobe Photoshop Element 13 was carried out. Note that gaps such as lumen of the blood vessel were excluded.

For immunohistochemistry, specimens were deparaffinized in xylene and placed in an incubator at 60 °C for 30 min. Then after, the specimens were pre-treated in 0.03 % hydrogen peroxide methanol solution and then immersed in 10mM citric acid buffer with a pH of 6.0 and placed in autoclave at 121 °C for 5 min.

Anti-GFP ChlP grade ab290 (Abcam, Cambridge, UK) with a dilution of 1:5000 was allowed to react overnight at 4 °C. For the secondary antibody, anti-rabbit polyclonal antibody Simple Stain Mouse MAXPO® (Nichirei, Tokyo, Japan) was allowed to react, then washed with PBS followed by color development with DAB. In a similar manner, the GFP positive cells were counted under the microscope.

Anti-CD31, anti-CD68 and Runx2 antibodies were combined with anti-GFP rabbit polyclonal antibody. After deparaffinization, pre-treatment was done with citric acid buffer in microwave for 1 min. Blocking was carried out with 10 % donkey for 30 min, followed by reaction with primary antibody at 4 °C overnight. For secondary antibody, Alexa Fluor R568 Donkey, anti-goat IgG antibodies (Molecular Probes, Japan) and Can Get Signal (Toyobo, Japan) with dilution of 1:200 was incubated for 60 min. Staining of the nucleus with 1 mg/ml DAPI was carried out for 3 min. Finally, slides were washed with TBS and then mounted using Fluorescent Mounting Medium (DAKO).

In the control group, the PDL runs radially from the cementum and alveolar bone and the bundles are relatively arranged in order. The spindle shaped fibroblasts have oval nucleus running parallel to the PL fibers. 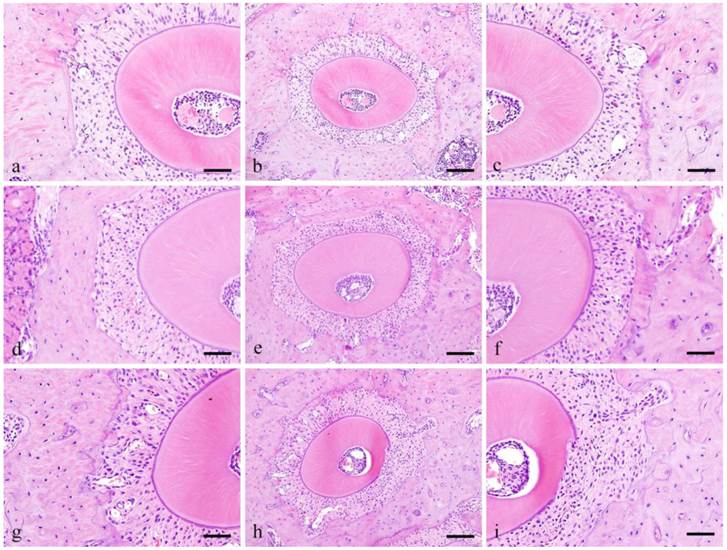 In the Experimental group, at pressure side, 3 days, the PDL space became narrow and densely packed with cells that are irregularly arranged. The size of nucleus varies and the shape is round compared to the spindle shape cells in the control group. Pressure side, 1 week, cell count at 1 week is higher compared to 3 days. Cells were both localized in alveolar bone and cementum and several osteoclasts were observed adjacent to the alveolar bone. The nuclei are huge and occupy most of the cytoplasm and are more round in shape compared to the control group.

Ratio of pixcel number in the control and experimental (3 day and 1 week), pressure side. 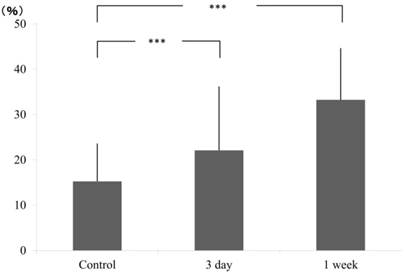 ratio of pixcel number in the control and experimental (3 day and 1 week), tension side. 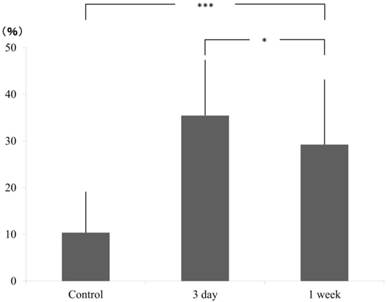 BMDCs are positive to GFP except for those at peripheral capillaries. Most GFP positive cells are located in alveolar bone near the PL and exhibit various shapes such as round, spindle, etc. Certainly, GFP-positive cells have the morphology of undifferentiated mesenchymal cells (UMC), which are fusiform, round or even polygonal. In addition, cells lining the lumen of the blood vessel are positive to GFP (Fig. 4a-b).

GFP and immunofluorescent double staining examination deals the specimens were subjected to double staining to identify various cell types of GFP-positive cells. Immunostaining of GFP-CD31, GFP-CD68 and GFP-Runx2 are shown in Fig. 5a-d respectively. Fig. 5 shows GFP positive cells in green fluorescence, Runx2 positive cells in red fluorescence and superimposition in orange fluorescence. Fusiform cells are arranged in bundles towards the root of the tooth. When superimposed with DAB, the nuclei stained blue and the periphery were stained with orange.

Recently, bone marrow derived un-differentiate mesenchymal cells (UDMC) has been widely used in studies on repair and regeneration of periodontal tissue, bone and other organs. During the regeneration of alveolar bone and PDL, studies have mentioned the differentiation of UDMC from bone marrow into cartilage (7). Experiments on GFP mouse and BMDCs showed that after acinar cell transplantation, the cells differentiated into salivary gland components such as ductal cells and myoepithelial cells with the ability to play a role in salivary gland tissue (8), as well as into olfactory cells (9). Histological experiment on rats subjected to orthodontic load showed that bone marrow stem cells increased the bone remodeling capacity (10).

Tomida et al. (1) measured the increase in PDL cells after mechanical stress at 1 and 5 weeks. In the present study, cell count was determined by counting GFP positive cells in the control and experimental groups. Results showed that GFP positive cell count in the experimental group is significantly higher than the control group. The increase in cell count in the PDL after mechanical stress highly suggests that the transplanted BMDCs were activated to migrate towards the PDL. 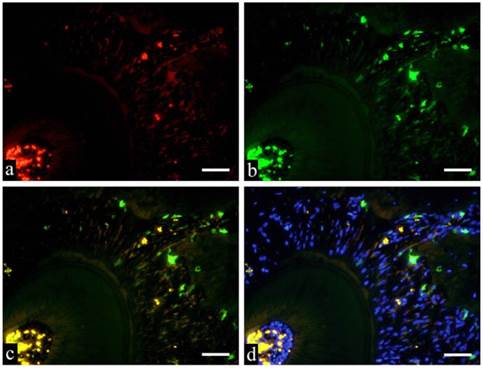 The results of the study suggested that mechanical stress promoted the increase in cell count in PL on both pressure and tension sides. Cell count increased in as short as 1 week although change in cell morphology was not detected. To determine if the increase in cell count was due to the migration of BMDCs, GFP positive cells were counted in the same manner done by Tomida et al. (1). A gradual increase in GFP positive cell count immediately after stress was noted, which further increased over time until 6 months. It is believed that PL was supplied with BMDCs for a long period of time. Furthermore, immunofluorescent double staining was performed to characterize the cells that have differentiated. Tsujigiwa et al. (13) confirmed that transplanted BMDCs migrate to the area of bone repair shown by double staining with GFP and CD34 in osteoclasts, etc. Applying the methodology of Muraoka et al. (2), we were able to identify the differentiation of cells into osteoclasts and macrophages by double immunofluorescent staining with GFP, CD31, CD68 and Runx2. Results showed that some GFP-positive cells that also expressed CD31 are either BMDCs or vascular endothelial cells and their differentiation was evident. Similar results were obtained with CD68. Moreover, the expression of Runx2 was carried out since it is also expressed by fibroblast (14-16). Results showed that the cells that co-expressed GFP and Runx2 are long and spindle shaped PL fibroblasts strongly suggesting that the cells were derived from bone marrow.

Based on the results and discussion, the following conclusions have been obtained:

1. Orthodontic mechanical stress promotes the growth of cells in the PDL.

2. Using GFP mouse, cell proliferation was brought about by the migration of BMDCs into the PDL.

3. BMDCs that migrated to the PDL differentiated into vascular endothelial cells, macrophages, osteoclasts and fibroblasts.