Introduction: Artesunate (ART), a wildly used agent to treat severe malarial around the world, also has the power to inhibit growth of different types of tumor. However, the exact molecular mechanisms keep unknown. Method: In this study, we used myelodysplastic syndrome (MDS) cells (SKM-1 cells) with differential ART concentrations treatment at multiple time points to observe the subsequence cell function alteration and the possible involved pathway genes. Results: We found that ART demonstrated the ability to inhibit proliferation and induce apoptosis in SKM-1 in a dose and time-dependent manner. Demethylase recovered CDH1 gene expression may be involved in the apoptosis process. The β-catenin protein translocated from the nucleus and cytoplasm to the membrane result in inactivation of β-catenin signaling pathway. Conclusion: Our findings provide a rational basis to develop ART as a useful therapeutic agent for the treatment of myelodysplastic syndromes.

The myelodysplastic syndromes are characterized with differentia ability inhibition in hematopoietic progenitor cells. Almost 30% of MDS patients will eventually convert into acute myeloid leukemia (AML) with poor prognosis defined by bone marrow blasts level [1]. Although research has been ongoing to obtain more detailed information to improve MDS treatment and prognosis, most current treatments only alleviate the symptoms and therefore novel treatments are urgently needed.

Dysregulation of the Wnt/β-catenin pathway is highly implicated in the pathogenesis of many tumors including leukemia and MDS [2, 3]. In normal cells, β-catenin is located in the membrane as part of cell-cell adhesion complexes to transmit the contact inhibition signal that signals cells to stop dividing. However, in tumor cells, β-catenin translocates to the nucleus losing its ability to trigger transcription of its target genes. This translocation turns tumor cells into invasive cells that eventually contribute to metastasis [4]. The E-cadherin gene (CDH1), located on chromosome 16q22, worked as tumor suppressor and modulated by the cytoplasmic proteins α-, β-, and γ-catenin [5]. Emerging studies suggest that CDH1 gene promoter polymorphism and its methylation may be a good marker for evaluating the prognosis of patients with MDS [6-9]. Hypermethylation for CDH1 promoter region was observed in MDS patients and this methylation was reported to correlate with poor prognosis [10]. Since methylation is a reversible epigenetic change, developing a potential demethylating anticancer compound in MDS is feasible. In this study we investigated the therapeutic effect of ART on CDH1 promoter methylation status.

ART is a well-known anti-malarial which derived from artemisinin, an extract of Artemisia annual (artemisinin) [11]. Recent studies reported ART to be a promising tumor therapy candidate for many types of tumors. It potentially triggers apoptotic cell death in doxorubicin-resistant T-leukemia cells[11], cervical cancer cells in conjunction with radiation[12], and induces apoptosis in MDS cell lines SKM-1 through caspase-dependent and independent pathways, although the mechanisms remain largely unknown[13]. In addition, ART was found to attenuate cell growth and inhibit the hyperactive Wnt/β-catenin pathway in human colorectal carcinoma [4]. A recent report indicated that ART significantly inhibited proliferation of the MDS cells [13]. The mechanism by which ART exudes its anti-tumor role in MDS still needs further exploration.

The SKM-1 cell line preserves the MDS and leukemic phases and is the most common tool used to study MDS. In this investigation, we treated SKM-1 cells with ART to explore the effects of ART on apoptosis and proliferation and investigated the possible signaling pathway involved in this anti-tumor mechanism.

The SKM-1 cell line was purchased from the Cell Collection of Chinese Academy of Sciences (Shanghai, China). Cells were cultured in RPMI1640 supplied with 10% calf serum, and incubated at 37 ℃ with 5% CO2, and used at the logarithmic growth phase.

SKM-1 cells were treated with different concentrations of ART (0, 12.5, 25, 50µg/mL) for 48 h, washed with cold PBS and harvested. Total protein was extracted with lysis buffer and resolved by SDS-PAGE, then transferred to PVDF membranes. To eliminate background disturb, membranes was blocked in put into blocking solution (5% low fat milk, 0.1% Tween 20 in PBS) at room temperature for 1hour. Cells were then incubated with a mouse monoclonal primary antibody specific for E-cadherin (ab76055), β-catenin(ab22656), c-myc(ab17365), cyclinD1 (ab10540) and GAPDH (ab9483) (Abcam, Cambridge, MA, USA; 1:400) at 4°C overnight and followed by incubation with a secondary antibody (Abcam, Cambridge, MA, USA; 1:1,000) for 2 h at room temperature.. Enhanced chemiluminescence (ECL) was performed for protein analysis.

SPSS 13.0 software was used for all data analysis. Numerical data are represented as the mean ± standard deviation (SD). The difference between control and treated cells was determined by Student's t-test and ANOVA Each experiment was performed in triplicates. p <0.05 was considered as statistically significant 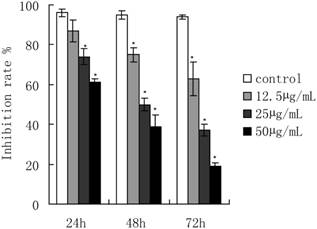 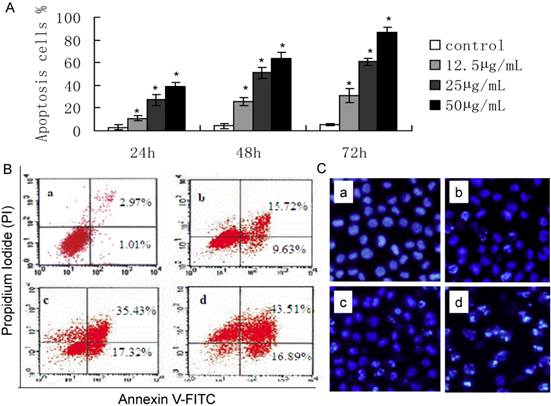 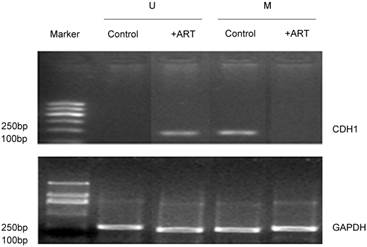 In order to investigate the inhibitory effect of ART on the Wnt/β-catenin pathway, we treated SKM-1 cells for 48h, and found that E-cadherin was induced from 12.5µg/mL treatment, and over expression with increasing ART concentrations (Fig 4, P<0.05), while β-catenin protein expression in whole cell lysis had no statistical change. We also identified the downstream target of Wnt/β-catenin pathway, c-myc and cyclinD1, and we found c-myc and cyclinD1 protein levels decreased from 25µg/mL after ART treatment (Fig 4, P<0.05) Furthermore, this decrease seems to negatively correlate with E-cadherin protein expression level. This may indicate that ART inhibited the Wnt/β-catenin signaling pathway by resuming the loss of E-cadherin expression in SKM-1cells.

Since aberrant E-cadherin/β-catenin localization also frequently occurs in MDS patients [15], we were interested to determine if the anti-tumor effect of ART was associated with E-cadherin/β-catenin localization alterations. We found the E-cadherin signal on the membrane was triggered when cells were treated with 12.5µg/mL ART, and distinctly accumulated on the membrane in 50µg/mL ART treatment group after 48h (Fig 5A). β-catenin localization confirmed by laser scanning confocal microscopy (LSCM), and β-catenin was visualized both in the nucleus and cytoplasm (Fig 5B, panel a). When we treated cells with different concentrations of ART (0, 12.5, 25, 50µg/mL), β-catenin expression gradually attenuated in the nucleus and cytoplasm while becoming more apparent on the membrane after 48h (Fig 5B, panel b, c, d). The overall intensity remained the same in both untreated and treated groups, which is consistent with β-catenin expression level in whole cell lysis.

Effects of ART on protein expression in Wnt/β-catenin pathway. Cell was harvested after different concentration of ART treatment for 48h, then E-caderin, β-catenin, c-myc and cyclin D1 was extracted from the whole cell lysis and determined by western blot. A. Quantification of protein expression level; B. Protein expression images. GAPDH was used as control. 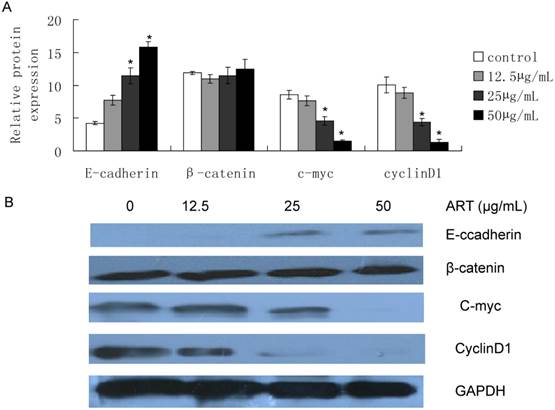 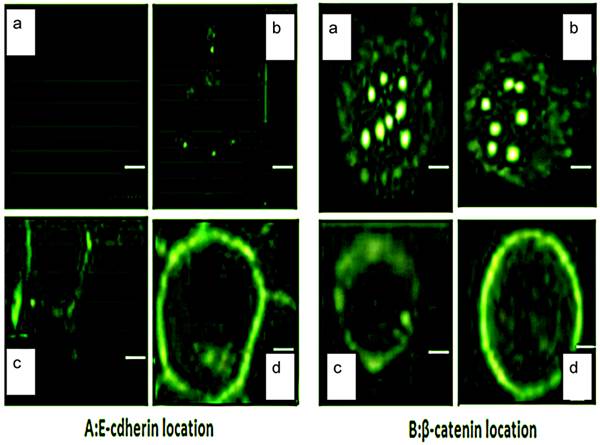 From our study, we found ART could inhibit proliferation and induce apoptosis in SKM-1 cells in a dose-dependent and time-dependent manner (Fig 1 and 2). The IC50 value of ART decreased as the treatment period increased. ART inhibiting proliferation and inducing apoptosis was reported in numerous tumors [16-17]. This anti-tumor effect relates to the inhibitory effect on the hyperactive Wnt/β-catenin pathway in human colorectal carcinoma, in which mRNA levels of c-myc were decreased after ART treatment [4]. Our findings in SKM-1 cells are in agreement with this study, and we also found ART treatment inhibited Wnt/β-catenin downstream expression of targets such as c-myc and cyclinD1. C-myc and cyclinD1 are the proto-oncogenes involved in regulating proliferation, differentiation and apoptosis [18].

In this study, we found SKM-1 cells lost E-cadherin expression (Fig 4, Lane 1). We found the E-cadherin gene (CDH1) in these cells remained highly methylated (Fig 3, Lane 3), and the CDH1 methylation occurred in high frequencies in MDS [1]. The profile of CpG island hypermethylation is an epigenetic phenomenon and plays an important role in MDS and the global DNA methylation often predicts overall survival in MDS [9]. Notably, when we treated cells with 50µg/mL ART for 48h, the silenced E-cadherin gene (CDH1) “woke up” and recovered the un-methylated MSP product (Fig 3, Lane 2). We also found the E-cadherin protein was expressed more as ART concentrations increased (Fig 4, Lane 2-4) and gradually accumulated in the membrane (Fig 5A, panel b-d). Our data strongly suggest that ART could function as a demethylating agent to remove the methyl group from CDH1 genes, thus restoring the E-cadherin protein expression. In the past few years, demethylating agents like Azacitidine and Decitabine, have been approved by the U.S. Food and Drug Administration (FDA) as common drugs in care of MDS [19]. In view of its non-observed side effect profile [20], ART could also be a promising demethylating agent used for MDS therapy possibly with fewer side effects than the other currently available drugs.

Using LSCM we were able to visualize the β-catenin location in the cytoplasm and the nucleus (Figure 5B, panel a), indicating that this could be one feature of the Wnt pathway activation [21 22]. Being expressed in the nucleus, β-catenin could bind with lymphoid enhancing binding factor-1/T-cell factor-4 (LEF-1/TCF-4) [23, 24]. This also could be a reason to sequester E-cadherin protein expression [23]. Strikingly, when we treated SKM-1 cell with ART, both β-catenin and E-cadherin translocated from the nucleus to the membrane, thereby forming the β-catenin/E-cadherin complex and strengthening cell-cell adhesion. They also further inhibited the epithelial to mesenchymal transition (EMT), which is recognized as an important event in malignancy. Several studies have demonstrated that β-catenin/E-cadherin complex is implicated in cancer chemoresistance [24, 25]. Β-catenin/E-cadherin complex recruits Nrf2 and inhibits Nrf2 nuclear localization and transcriptional activity, thus making cancer cell more sensitive to anti-cancer therapy [25]. This ART-induced β-catenin and E-cadherin redistribution may help cancer cells decrease drug resistance and promote apoptosis of SKM-1 cells by inhibiting the hyperactive Wnt/β-catenin pathway.

In summary, ART treatment demethylated CDH1, which, in turn recovers the E-cadherin activation in SKM-1 cells. Furthermore, by inhibiting the Wnt/β-catenin pathway, the translocation of subcelluar β-catenin and E-cadherin to adherent junctions of the membrane enhances cell adhesion and inhibits metastasis and may also enhance chemo-sensitivity to other clinical agents. The expression of Wnt/β-catenin downstream targets; c-myc and cyclinD1, also diminished causing tumor cell growth inhibition and increased apoptosis. Thereby these anti-tumor effects caused by ART may be a promising therapeutic drug for MDS therapy.

The authors declare that there are no conflicts of interest.