Background: The use of a retroflexed view exposes the entire tumor surface, which is obscured in the forward view, and contributes to complete tumor resection when combined with forward views. However, the efficacy and safety of using the retroflexed view for colorectal endoscopic submucosal dissection (ESD) are poorly understood.

Methods: In this study, we assessed the efficacy and safety of the retroflexed view in colorectal ESD. From April 2009 to December 2013, 130 colorectal tumors were examined in 128 patients treated with ESD. A total of 119 patients with a mean tumor size of 27.2 mm were enrolled in the study, and these patients were assigned to undergo colorectal ESD with or without a retroflexed view.

Endoscopic submucosal dissection (ESD) is widely used to treat gastrointestinal cancer. This approach provides a high rate of en bloc resection for large colorectal tumors and is reportedly effective in 88.0-94.5% of cases (1-3). However, ESD has not yet been recognized as a conventional therapeutic procedure for early colorectal carcinoma, and this procedure has not been standardized because of its associated technical challenges (4). Moreover, because the colonic wall is thinner than the gastric wall and there are many folds in the colon and rectum, some lesions are difficult to access during colorectal ESD because of their location on the proximal sides of folds or flexures.

Between April 2009 and April 2013, 130 colorectal tumors in 128 patients were resected by ESD at our institute (Figure 1). The indications for colorectal ESD at our institution are as follows: (i) colorectal carcinoma >20 mm in size, which is considered curable according to magnification endoscopy or endoscopic ultrasound findings and is difficult to resect en bloc; (ii) colorectal adenoma with a non-lifting sign after endoscopic injection; and (iii) residual or recurrent colorectal adenoma >10 mm in size, which is difficult to resect by conventional endoscopic mucosal resection (EMR). We examined all lesions using magnifying endoscopy prior to endoscopic therapy and determined the indications for ESD or EMR in accordance with current guidelines. The following exclusion criteria were applied: 1) lesions that could result in en bloc resection by EMR; 2) lesions located in the anal canal or in the appendix; 3) tumor size >70 mm; 4) severe organ failure; 5) current anticoagulant therapy; and 6) an inability to obtain written informed consent. The remaining nine patients were excluded from the present study for the following reasons: ESD was attempted but abandoned (n=5); tumor size was >100 mm (n=5); and the tumor was a carcinoid (n=3).

The invasion depth was limited to mucosal or submucosal (SM)1, as estimated endoscopically and by chromoendoscopic magnification in most cases (12). Based on extensive clinicopathological analyses (13-15), we defined the indications for ESD (16) as nongranular laterally spreading tumors (LST-NG) >20 mm and granular LSTs (LST-G) >30 mm. Both tumor types have high SM invasion rates and are difficult to treat even by piecemeal EMR (13,15). Large villous tumors and intramucosal lesions, recurrent lesions, and residual mucosal lesions that showed evidence of non-lifting (17-18) after EMR were also potential candidates for ESD. The final treatment decision was made by each individual endoscopist. 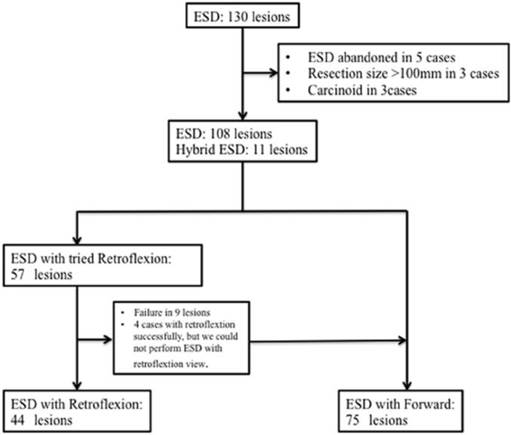 The tumor types were classified according to the Paris classification (19) and Kudo's classification (20) as type 0-I (protruded) and 2 LST subtypes. The LST subtypes were also characterized as LST-G or LST-NG. The extent of the tumor was determined by differences in the color, height, morphological features, and pit patterns between the neoplastic and non-neoplastic mucosa. The tumor depth was assessed using morphological features. Tumors that showed evidence of regions of hardness, irregular nodules, ulceration, or submucosal tumor-like marginal elevation were suspected to be massive SM tumors >1,000 μm (SM2 or deeper).

Histological classification was performed according to the Vienna classification of gastrointestinal epithelial neoplasia (21-22). The extension of tumor cells to the resected margin was classified as follows: complete resection (R0), in which the lateral and basal resection margins were tumor-free (and en bloc resection was essential); incomplete resection (R1), in which the tumor extended into the lateral or basal margins or was not evaluable (Rx); or margins that could not be evaluated. Curative resection was achieved when both the lateral and vertical margins of the specimen/specimens were cancer-free and there was no submucosal invasion ≥1000 mm (SM1), lymphatic invasion, vascular involvement, or poorly differentiated components (23).

Preparation prior to colorectal ESD

The patients were given a low-fiber diet the day before ESD and were prescribed 24 mg of sennoside (Pursennid; Novartis Pharma, Tokyo, Japan) the night before ESD. Patients underwent bowel preparation with either 1.8 L of magnesium citrate or 2 L of polyethylene glycol in the morning of the day of ESD. Immediately prior to the procedure, an intravenous injection containing 20 mg of scopolamine butyl bromide (Buscopan; Nippon Boehringer Ingelheim, Tokyo, Japan) or 1 mg of glucagon (Glucagon G Novo; Eisai, Tokyo, Japan), 15 mg of pentazocine (Pentazin; Sankyo Pharmaceuticals, Tokyo, Japan), and 2.5 mg of midazolam (Dormicum; Astellas Pharma, Tokyo, Japan) was administered. During the procedure, 1.25 mg of midazolam was administered as necessary.

Retroflexion was attempted in cases in which forward viewing did not allow access to a proximal side of the lesion or in which access was considered extremely difficult. In these cases, retroflexion also enabled a more en face approach. The lesions were considered appropriate for retroflexion based on their size and accessibility.

Diagram of an endoscopic mucosal dissection with forward and retroflexed views. 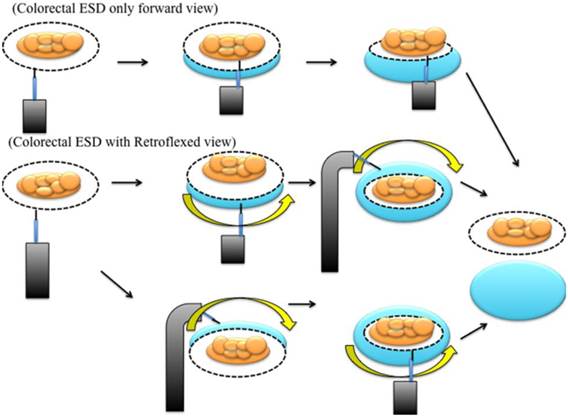 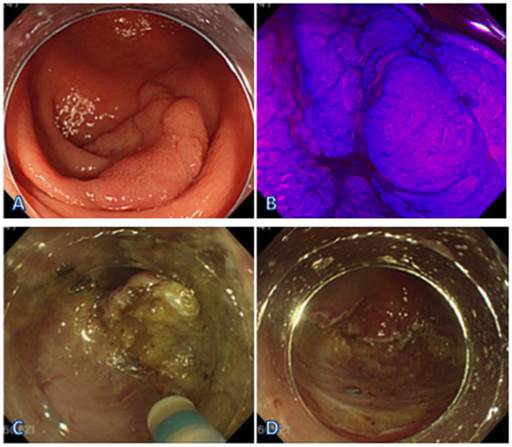 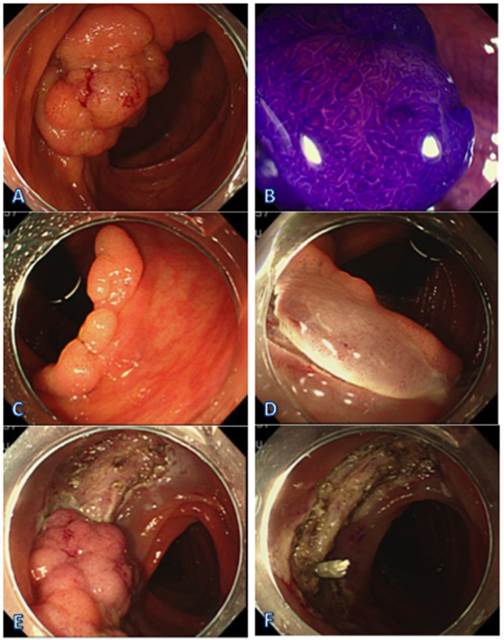 The total procedure times, retroflexion-related complications, and success rates were assessed by recorded video after the procedures and were evaluated as primary end points. The procedure time was defined as the time from the circumferential marking around the lesions to the complete removal of the tumor.

The absolute and relative frequencies of qualitative variables were calculated for each group. The continuous variables were expressed as the mean±standard deviation (SD). The continuous variables were compared using Student's t-test if the data were normally distributed or the Wilcoxon test if the data were not normally distributed. Pearson's chi-square test or Fisher's exact test was used to analyze the categorical data to compare proportions. All p-values were two-tailed, and p<0.05 was defined as statistically significant. Data analysis was conducted using JMP version 9.0 (SAS Institute, Cary, NC, USA).

Between April 2009 and April 2013, we performed colorectal ESD in 130 patients with superficial colorectal neoplasms. The patient characteristics and tumor clinicopathological features are summarized in Table 1. A total of 119 patients (77 males and 42 females) with a mean tumor size of 27.2 mm were enrolled in the study. The patients were assigned to undergo colorectal ESD with or without a retroflexed view.

The complication data are summarized in Table 3. Immediate bowel perforations occurred in two patients (2.7%) in the forward group, and there was delayed bleeding in two patients (4.3%) in the retroflexed view group. However, there were no significant between-group differences in complications and hospital admissions.

Complications related to the procedure

In the present study, we made two important clinical observations. First, the retroflexed view could be used to remove lesions >40 mm and resulted in shorted procedure times and an increased en bloc resection rate. Second, the success ratio of retroflexion was 84.2%, with values for the right-sided colon and rectum higher than those for the left-sided colon and sigmoid colon, and there were no complications related to the use of retroflexed views.

Retroflexion was able to shorten the procedure time because it reduced the respiratory variation in visual fields and stabilized the scope. In particular, in cases in which the LST and protruded polyp were large in size, we could not detect the proximal side of the lesions, and it was therefore difficult to perform the ESD procedure on the proximal side of the lesions. Additionally, when the retroflexion technique was successful, it contributed to patient safety and scope stability because the scope was fixed in the colorectal lumen and there was a reduction in respiratory variation, especially on the right side of the colon. A steady cut with fixing of the knife to the target decreased a potential risk of major complications, such as perforation and bleeding, because of an unexpected incision caused by the heart beat or respiratory movement.

Difficulty regarding the use of ESD is associated with both the location and size of the lesion (28-30), because procedure times increase as the tumor location extends into the colon and the tumor size increases (30). The risk factors for perforation and delayed bleeding during gastric ESD include the tumor location, old age, presence of fibrosis, and long procedure times (28-29). Therefore, shortening the length of the procedure may reduce complications.

There are many electrical devices that can reduce the difficulties associated with colorectal ESD procedures (31). The flush knife (DK2618JN; Fujifilm, Tokyo, Japan) is a needle knife that has the added advantage of allowing local injection (37). The newly developed insulation-tipped electrosurgical knife (IT Knife Nano, KD-612Q: Olympus Optical Co., Tokyo, Japan) has a smaller insulation tip than the previous version and the short blade design results in safer procedures by reducing the risk of perforation (38). Grasping scissor-type forceps do not require adept technical skills because they can facilitate manipulations such as rotation, grasping, incision, and resection (39,40).

In particular, ESD experts express the following common opinions: 1) sodium hyaluronate solution is valuable for ESD procedures (32-33); 2) attachments are generally used to achieve a clear visual field; and 3) a carbon dioxide insufflation system is essential for reducing abdominal distention (16,34). Additionally, position changes using the effect of gravity are sometimes effective in maintaining a good visual field (35). If possible, retroflex manipulation is also effective for the resection of lesions on the oral side (36).

This study had several limitations. First, it was retrospective and was affected by the limitations associated with its investigational design. Second, the sample size for the retroflexion group was relatively small. Third, because the strategy for colorectal ESD was determined by the endoscopists, selection bias could have affected the outcome.

In this study, the retroflexed view was used to remove lesions of >40 mm in size. Moreover, the retroflexion approach shortened procedure times and may contribute to increased rates of en bloc resection.

The author(s) declare no conflicts of interest.

6. Pishvaian AC, Al-Kawas FH. Retroflexion in the colon: a useful and safe technique in the evaluation and resection of sessile polyps during colonoscopy. Am J Gastroenterol. 2006;101:1479-83