Objectives and Background: Despite a generally broad use of vascular closure devices (VCDs), it remains unclear whether they can also be used in victims from out-of-hospital cardiac arrest (OHCA) treated with mild therapeutic hypothermia (MTH).

Methods: All victims from OHCA who received immediate coronary angiography after OHCA between January 1st 2008 and December 31st 2013 were included in this study. The operator decided to either use a VCD (Angio-Seal™) or manual compression for femoral artery puncture. The decision to induce MTH was based on the clinical circumstances.

Conclusion: In our study, the overall rate of vascular complications related to coronary angiography was higher in patients treated with mild therapeutic hypothermia, but was not affected by the application of a vascular closure device. Therefore, our data suggest that the use of VCDs in victims from OHCA might be feasible and safe in patients treated with MTH as well, at least if the decision to use them is individually carefully determined.

The current Guidelines of the European Resuscitation Council emphasise early coronary angiography in all post-cardiac arrest patients who are suspected of having coronary artery disease [1]. Several studies confirmed that the combination of mild therapeutic hypothermia (MTH) and early coronary angiography - inclusive percutaneous coronary intervention (PCI), if necessary - is feasible and safe in patients following out-of-hospital cardiac arrest (OHCA) [2-6]. However, although the use of vascular closure devices (VCDs) has increased during the past decade, no study has focussed on the safety of VCDs prior to MTH in victims from OHCA.

Altogether, 76 patients who received emergency coronary angiography within the first two hours after OHCA between January 1st 2008 and December 31st 2013 were included in this study. Mean age was 64.2 ± 12.8 years.

Patients' data were collected from the patients' health records and anonymously stored on a central database.

Catheterisation was performed according to standard techniques with the six French femoral approach. If a recent coronary-artery stenosis was found, coronary angioplasty was attempted, unless the artery was too small or the operator considered the procedure to be technically impossible. Standard resuscitative and stabilisation procedures were continued during the procedure if necessary.

At the end of the procedure, the operator decided to use either a vascular closure device or manual compression for femoral artery puncture. If a VCD was chosen, an Angio-Seal™ device (St. Jude Medical, Minnetonka, MN, USA) that consists of an intra-arterially deployed polymer anchor, a collagen sponge positioned on the outer artery wall, and a self-tightening suture was used. The whole system is bioabsorbed within 90 days. All patients were followed-up by an experienced emergency physician. Hb-relevant bleeding was defined as a haemoglobin drop of more than 3 g/dl within the first 24 hours following coronary angiography and exclusion of other obvious causes or clinical bleeding signs.

The decision to induce MTH was based on the clinical circumstances, taking into account aspects like initial rhythm, duration of resuscitation, and state of consciousness. If necessary, MTH was induced immediately after the emergency coronary procedure with the CoolGard 3000™ system since several studies confirmed the safety and effectiveness of intravascular cooling [7]. The target temperature was 33 °Celsius for 24 hours, the rate of temperature change was maximised to induce MTH and was 0.3 °Celsius/hour to rewarm the patients. The Cooling Catheter with the saline flowing within was placed via the femoral vein in the cardiac catheterisation laboratory at the end of the coronary procedure.

Statistical analysis was performed with the Statistical Package of Social Science (SPSS 22.0, IBM, Armonk, NY, USA). Continuous variables are expressed as the mean ± SD, and comparisons of categorical variables among groups were conducted using Chi-square tests or Student's t-test. Data collection and analysis was approved by the local ethical review committee.

48 victims from OHCA (63.2%) were treated with mild therapeutic hypothermia after immediate coronary angiography, 28 patients (36.8%) were not.

No significant differences could be observed with regard on patients` gender, age, witnessed arrests, initial shockable rhythm, myocardial infarction, prevalence of coronary artery disease, PCI attempt, duration of coronary angiography, use of eptifibatide during PCI, use of Angio-Seal™ and survival until hospital discharge (Table 1).

In victims who suffered OHCA, the combination of MTH and early coronary angiography inclusive PCI, if necessary, has been described as feasible and safe [2-6]. Specifically, bleeding complications have been excluded as relevant clinical problems related to MTH in several previous studies [8-12]. However, bleeding rates varied enormously in the different studies. While Nielsen et al. [2] described an increased risk of bleeding in only 4% of all patients following OHCA if coronary angiography with (6.2%) or without PCI (2.8%) was performed, other studies reported much higher bleeding rates of more than 20% [6, 13, 14] and a tendency towards increased bleeding complications in the MTH-treated group, which we also observed in our data (p=0.08) (table 2) [6, 14]. The underlying mechanism for this observation is unknown. Coronary angiography per se affects coagulation [15], and therapeutic hypothermia may, depending on the depth and duration, induce coagulopathy [16]. Additionally, in an animal model, thrombelastometry at 34°C during hypothermia showed significant differences for clotting time and clot formation [17]. Nevertheless, to our knowledge, there is no study that could further differentiate the influence of each of these individual factors. In addition, patients routinely receive heparin before coronary angiography and platelet inhibitors in association with PCI in a standard dose regardless of their post-resuscitation status. However, although it could be shown that MTH does not augment abciximab-induced inhibition of platelet aggregation [18], there are no reports on the influence of hypothermia on clopidogrel, prasugrel, or ticagrelor concentrations, and a potentially resulting risk of under- or overtreatment with these drugs in OHCA victims treated with MTH.

Differences within the group of patients treated with vascular closure devices depending on whether they received mild therapeutic hypothermia (MTH) or not. 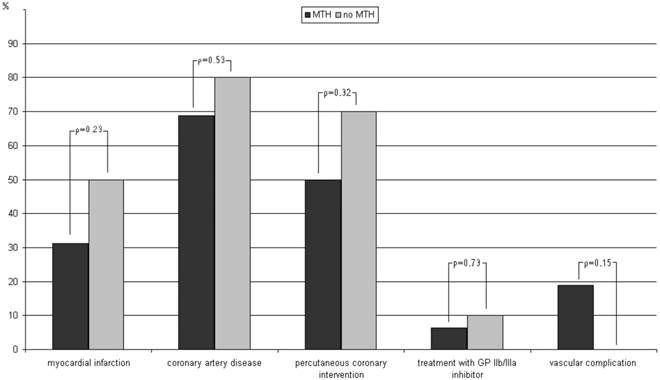 We therefore recommend that previous studies should try to verify whether some of these factors combined may increase the risk of bleeding, requiring transfusion when an invasive procedure is performed in resuscitated patients treated with MTH.

Several studies describe the safety of vascular closure devices after routine coronary angiogram and routine PCI [19, 20], as well as following coronary interventions using anticoagulation and GP IIb/IIIa inhibitor therapy [21]. Therefore, the use of VCDs has increased during the last decade, especially since the application of VCDs has been described as independently associated with a reduction in the rate of vascular complications and the post-PCI length of hospital stay [22]. Nevertheless, there are also data that reported an increase in the serious risk for retroperitoneal bleeding in patients treated with VCDs [23]. Additionally, in contrast to elective settings, the risk of access site-related vascular complications was significantly increased after application of the VCD Angio-Seal™ in patients undergoing emergency catheterisations for NSTEMI/STEMI when compared with manual compression [24]. Since victims from OHCA undergo emergency catheterisation, VCDs should be used carefully in this group. However, no previous study focused specifically on this patient collective.

In our study, VCDs were used in about one third (34.2%) of all OHCA victims (Table 1). Further subgroup analysis revealed that, at least in patients treated with MTH, the application of Angio-Seal™ devices was influenced by coronary findings, such as myocardial infarction, percutaneous coronary intervention, or treatment with GP IIb/IIIa inhibitor, with less frequent use of VCDs in more complex procedures (Table 2). However, the use of VCDs was not adapted for further treatment with MTH in general (Table 2, Figure 1). Regardless of whether the OHCA were treated with MTH after coronary angiography or not, we could not observe any difference in the rate of vascular complications or survival rates between patients treated with or without VCD (Table 2).

The present study is a single center study and, therefore, our findings should be verified by further investigations.

In our study, the overall rate of vascular complications related to coronary angiography was higher in patients treated with MTH, but was not affected by the application of a VCD. Therefore, our data suggest that the use of VCDs in OHCA victims might be also feasible and safe in patients treated with MTH, at least if the decision to use them is carefully considered and adapted on an individual basis.

All authors declare no conflicts of interest.