Malignant Lymphomas in the Head and Neck Region - a Retrospective, Single-Center Study over 41 Years

Objectives: Non-Hodgkin lymphomas are malignant neoplastic proliferations of the immune system that can manifest as nodal or extranodal lymphomas. The aim of this study was to retrospectively investigate the site of occurrence of lymphomas in the head and neck area and to analyze the typical symptoms of patients who presented at an oral and maxillofacial surgical department.

Material and Methods: All patient files from1971 until 2012 from an Oral and Maxillofacial Surgery of a University were analyzed for the diagnosis non-Hodgkin lymphoma. Epidemiologic data and data regarding the localization of the malignant lymphoma were evaluated.

Results: 62 patients, 34 women and 28 men with a non-Hodgkin lymphoma in the head and neck area were treated in the 41 years analyzed. In 87% of the cases the lymphoma belonged to B-cell and in 12% to the T-cell lineage. The average age at the time of diagnosis was 67 years for women (n=34) and 56 years for men. With 22 patients each, the non-Hodgkin lymphoma was localized in either the soft tissues or osseous structures. In the remaining 18 cases, multiple structures were affected. In 33 patients no accompanying nodal manifestation was noticed. In 33 cases the lymphoma was located in the oral cavity. The most common symptoms were swelling (97%), pain (40%) and the existence of an ulcer (11%).

Conclusion: In the present study more than 50% of the lymphomas were located in the oral cavity. Due to the unspecific symptoms, a histopathological verification of the diagnosis is crucial.

Lymphomas are malignant neoplastic proliferations of the immune system. 10% are Hodgkin and 90% non-Hodgkin lymphomas [1]. Up until 1990, different classifications were used making comparisons, and therefore generally accepted therapy guidelines, nearly impossible. In 1994 a new classification was implemented called REAL, standing for Revised European American Lymphoma Classification. Based on this, the current WHO classification was developed and is generally used [2].

Patients with HIV [4], organ transplantation, stem-cell transplantation, an inherited immunodeficiency syndrome, or an autoimmune disease have an increased risk to develop a non-Hodgkin lymphoma (NHL) [1] as well as patients with an increased exposure to ultraviolet radiation [5]. Microorganisms that are regularly associated with the development of a non-Hodgkin lymphoma are the Epstein-Barr virus (Burkitt's, nasal NK-cell or T-cell lymphoma), Helicobacter pylori (mucosa-associated lymphoid tissue lymphoma) [1] and HHV-8, HTLV-1, HCV, and SV40 [6].

Depending on the point in time and the country the study was conducted in, the proportion of lymphomas in the entire field of head and neck malignancies ranges from 1 to 17% [7, 8]. Surprisingly, little information is available for Western countries, and it is out of date.

Intra oral lymphomas can resemble dental abscesses [9], tumors [10] or other diseases such as osteonecrosis [11]. The knowledge of different presentation forms of non-Hodgkin lymphoma is crucial for the dentist to allow the earliest possible diagnosis and therapy for the patient.

The aim of this study was to retrospectively investigate the site of occurrence of lymphomas in the head and neck area and to analyze the typical symptoms of patients who presented at an oral and maxillofacial surgical department.

The inclusion criterion was the diagnosis of a lymphoma. Exclusion criteria were a previously known lymphoma and a missing histological verification of the lymphoma.

Epidemiologic data were collected as well as the site of occurrence and the disease-specific symptoms described by the patient before the diagnosis was made.

The student's t-test, the Chi-Square-test and the exact Fisher's test were used for statistical analysis. A p-value < 0.05 was considered statistically significant.

B-cell non-Hodgkin lymphoma. Presentation of a highly aggressive B-cell non-Hodgkin lymphoma at stage IV A. The patient's therapy was R-CHOP (cyclophosphamide, doxorubicin, vincristine, prednisolone) with an additional intrathekal triple therapy. The patient had a complete remission after 6 cycles. An additional radiotherapy of the maxilla was planned. 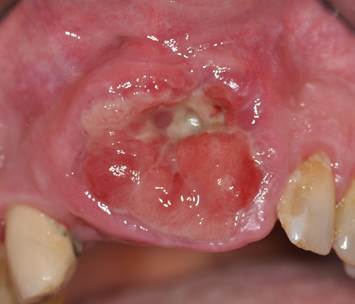 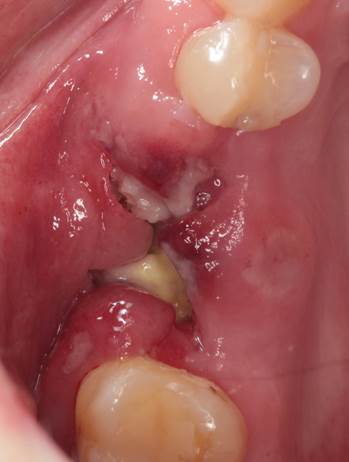 Age distribution. Patients with NHL separated by men and women. The x-axis describes the age groups and the y-axis the number (n) of patients. 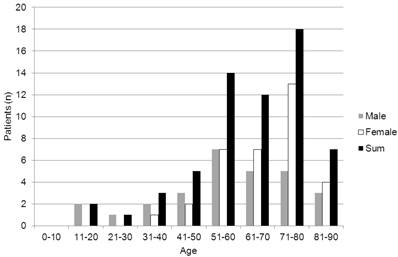 56 NHLs were located in the soft tissues: 42 lymph nodes, 8 times in the salivary glands (parotid gland n=5, submandibular gland n=2, sublingual gland n=1), once each in the tongue, the soft palate, the temporal muscle and the buccal mucosal membrane, and twice in the skin.

All patients with NHL except 7 received further treatment after diagnosis was made, such as chemotherapy or radiation therapy. In 5 patients, only surgery was performed; in one patient the disease was so advanced that no more therapy was performed, and in one patient the therapy is unknown. Follow up for survival was not part of this analysis, since further staging and chemo-/ radiotherapeutic treatment was not performed within the department of oral and maxillofacial surgery.

All patients with NHL except 7 received further treatment after diagnosis was made, such as chemotherapy or radiation therapy. In 5 patients, only surgery was performed; in one patient the disease was so advanced that no more therapy was performed, and in one patient the therapy is unknown. Follow up for survival was not part of this analysis, since further staging and chemo-/ radiotherapeutic treatment was not performed within the department of oral and maxillofacial surgery.

Clinical symptoms of manifestations of non-Hodgkin lymphomas at the time of presentation.

A difference was detected in the age difference between the in generally younger men compared to women, which is not a typical feature for lymphomas [3] and which is rarely described for non-Hodgkin lymphomas in the head and neck area. In addition, more than 50% of the patients did not have a nodal manifestation although a higher proportion of nodal nod-Hodgkin lymphomas is usually described in literature [12, 13] with a ratio of 2-3 : 1 for nodal versus extranodal manifestations. It is unknown if further manifestations were found in the following staging of these patients. It might be due to the characteristics of the patient group analyzed at an Oral and Maxillofacial Surgical Department, since the vast majority of patients are referred by dentists. Patients with a mass in the area of the neck might consult an ENT specialist instead of an oral and maxillofacial surgeon. Only few other studies have a similar distribution [14].

Usually non-Hodgkin lymphomas of the head and neck area occur more often in men, with approximately 55-77% of cases [12, 13, 15, 16]. In the present study only 45% of all patients were men, so that women were slightly more often affected. This is rarely described in the literature. It might be due to the small sample size of this study's population and the missing of the exact subtype of the lymphomas [17].

2-3% of the extranodal non-Hodgkin lymphomas appeared in the oral cavity [12]. In a recently published study about extranodal lymphomas of the head and neck region, the most common site were the salivary glands with 41%. Manifestations in the mandible and the maxilla accounted for another 41%, and the remaining non-Hodgkin lymphomas appeared at the paranasal sinus, the Waldeyer ring and the orbit [12]. Another recent study on 122 lymphomas in the head and neck area described 80 extranodal cases and only 42 nodal cases. Out of the 80 extranodal cases, only one appeared in the oral cavity [14].

In the present study 33 cases occurred in the oral cavity, which is more than 50%. This might be due to the fact that this study was conducted in an oral and maxillofacial surgery and is therefore does not comprise all the non-Hodgkin lymphomas that have been diagnosed by the department of dermatology or the ENT.

Other limits of this study are the lack of subclassification of the non-Hodgkin lymphoma and the missing follow-up data, especially for the early patients since not all data were available anymore. On the other hand, a comparison might not be feasible, especially since the classification of lymphomas has changed several times in the past.

A limit of this study is its retrospective design. There is always the question of correct documentation. In addition in case of nodal manifestation of the NHL in some cases most representative lymph node might have been extirpated without removing potential further ipsi- or contralateral lymph nodes.

Unfortunately the symptoms of non-Hodgkin lymphoma are not specific [15]. The most common symptom was a non-pathognomic swelling. Therefore a prompt histopathological evaluation should be sought so that early oncologic treatment can be performed as therapy is potentially curative [1] and the success depends on the kind of lymphoma [1] (Table 3). A delay of the diagnosis might lead to the development of a greater stage of lymphoma and a worse prognosis. Therefore the early detection of dental personal is of utmost importance.

This study's results are in accordance with the literature except for the large proportion of extranodal and oral manifestations and the gender distribution, with more women being affected. To analyze the differences between non-Hodgkin lymphomas manifesting at different sites of the head and neck area and between the different subtypes manifesting in this region, multicenter studies are necessary with a greater number of patients with non-Hodgkin lymphoma.

Staging system of non-Hodgkin lymphomas according to the Ann Arbor staging system [1]. B symptoms are fever (temperature > 38°C, night sweats, and weight loss of more than 10% of the body weight in the prior 6 months.

Typical symptoms of non-Hodgkin lymphomas manifesting in the head and neck area are swelling, pain and ulcer and it can appear as nodal and extra nodal disease. The vast majority of lymphomas does not occur in the oral cavity and therefore is rarely described. A suspicious alteration of the mucosal membrane of the oral cavity, a non-healing extraction socket or a mass at the neck should be properly diagnosed by histopathological evaluation to rule out diseases such as a malignant lymphoma and to enable early disease specific treatment.