The Effect of Single Embryo Transfer on Perinatal Outcomes in Japan

Objective: In 2007 and 2008, the Japan Society for Reproductive Medicine and the Japan Society of Obstetrics and Gynecology issued a recommendation for single embryo transfer (SET). Thereafter, SET was implemented in 73% of in vitro fertilization (IVF) cases in Japan. The purpose of this study was to evaluate the effects of compliance with the SET recommendation on perinatal outcomes.

Methods: An electronic audit of the perinatal database of the Japanese Society of Obstetrics and Gynecology was conducted from 2001 through 2010. The database comprised data of 610,726 women. Totally, 20,923 women conceived through IVF. To compare perinatal outcomes, these women were categorized into two study groups depending on whether they conceived before (2004-2005, n = 3,865) or after (2009-2010, n = 6,842) the SET recommendation statement was issued.

Conclusion: Compliance with the SET recommendation improved perinatal outcomes by reducing the incidence of twin pregnancies.

Since the birth of the first baby conceived through in vitro fertilization (IVF) in 1978, assisted reproductive technology (ART) has been a highly successful and widely employed modality for treating infertility. Initially, because inadequate embryo culture techniques resulted in a poor success rate following IVF, clinicians transferred multiple embryos to maximize the chances of conception. As advances in culture techniques improved the pregnancy rate of IVF, multiple-gestation pregnancies increasingly became a problem (1, 2).

Recently, elective single embryo transfer (eSET) has been adopted by ART centers worldwide as a means to reduce the multiple pregnancy rates (3, 4). In European countries, national legislation restricts the number of embryos transferred (3, 5). In 1998, the American Society for Reproductive Medicine issued practice guidelines on the number of embryos to transfer, and has periodically revised these guidelines, most recently in 2013 (4). These guidelines recommend consideration of eSET in women with a favorable prognosis aged under 35. Single-embryo transfer (SET) has been slowly adopted in many countries, and a few studies have assessed the contribution of the eSET strategy on perinatal outcomes (6-8).

In Japan, the Japan Society for Reproductive Medicine (JSRM), concerned about the number of multiple births resulting from ART, prepared concrete recommendation regarding the number of embryos transferred in 2006, and developed specific guidelines about the number of embryos to be transferred in March 2007(9, 10). In 2008, the Japan Society of Obstetrics and Gynecology (JSOG) issued a recommendation for SET for all cases except in cases of repeated IVF failure or in patients >35 years where two embryos could be transferred (11).

This study evaluates the effect of compliance with the SET recommendation on perinatal outcomes in pregnancies conceived through IVF using a large Japanese database.

The study protocol was reviewed and approved by the Institutional Review Board of Nippon Medical School, Tokyo, Japan. We selected a case-control design to evaluate the effect of the SET recommendation statement on the perinatal outcomes of pregnancies conceived through IVF.

Data in this study derived from the perinatal database of JSOG. This nationwide registry was established in 1974. Detailed descriptions of the database have been published previously (12, 13). In brief, the attending physicians at 139 tertiary centers of the Perinatal Research Network in Japan collected data annually on all pregnant women in an offline clinical database with a common format. The data were sent to the perinatal committee of JSOG, where quality control for the database was assessed.

We used data of 638,268 deliveries reported between 2001 and 2010. Gestational age was determined on the basis of menstrual history, prenatal examination, and ultrasound findings, such as gestational sac diameter, crown-rump length, and biparietal diameter. Linked data included information on maternal characteristics, such as maternal age, parity, cigarette smoking, and alcohol consumption during pregnancy, history of treatment for infertility (ovulation stimulation, intrauterine insemination, or IVF-embryo transfer), medical complications, and pregnancy complications. Fetal and infant outcomes were also routinely recorded by attendants at delivery. These data conform to uniform coding specifications, have passed a rigorous quality check, and have been edited and reviewed. The current study limited the analysis to women who delivered a live birth or stillbirth at 22 weeks of gestation or more. After excluding missing data, 610,719 pregnancies were included in this study.

Two study groups were created according to whether they conceived before or after the SET recommendation statement was issued. We did not adopt the data from 2006 through 2008 to exclude influence of the shift period, because the guidelines on JSRM were announced for one year before 2007 by their journal and website, and JSOG issued a statement of recommendation for SET in 2008. The IVF group included both women who received eggs spontaneously fertilized by sperm in vitro, or eggs fertilized by intracytoplasmic sperm injection (ICSI), followed by transfer of the embryo back into the uterine cavity. However, further information on the use of ICSI was unavailable in our database.

Data were analyzed using SPSS Statistics version 17.0 (SPSS Inc., Chicago, IL, USA) and Excel (Microsoft, Redmond, WA, USA). Statistical analysis was performed using the Mann-Whitney U test for continuous variables, such as maternal age, body mass index (BMI), birth weight, and the chi-squared test for categorical variables. A p value of <0.05 was considered statistically significant. Logistic regression analysis was used to compare adjusted odds ratios (OR) and 95% confidence intervals (CI) for adverse obstetric and perinatal outcomes before and after the issue of the SET recommendation. 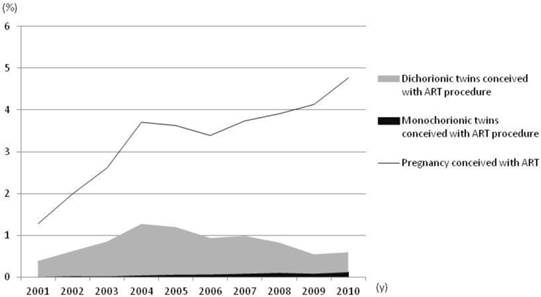 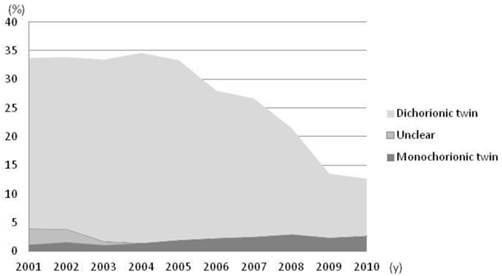 To evaluate the effect of compliance with the SET recommendation on the perinatal outcomes of pregnancies conceived through IVF, women who conceived through IVF were categorized into two study groups depending on whether they conceived before (2004-2005, n = 3,865) or after (2009-2010, n = 6,842) the SET recommendation statement issued. The maternal characteristics of the two study groups are summarized in Table 1. Maternal age and the proportion of women with preexisting medical complications tended to be higher in 2009-2010 than in 2004-2005. The proportion of nulliparous women decreased in 2009-2010. No significant differences were observed in BMI and alcohol consumption between the two groups.

Maternal characteristics of the study population.

SET has been gradually accepted worldwide as a means to reduce multiple pregnancy rates (5). Recently, several studies (6, 20-24) have reported the efficacy of SET, which yields an excellent pregnancy rate and drastically decreases twin pregnancies. Other retrospective studies (25, 26) have demonstrated that SET after transfer of thawed embryos results in similar pregnancy rates as double-embryo transfer and significantly decreased multiple pregnancy rates. However, the number of SETs performed remains modest in many countries. In the US, only 13.5% of ART cycles employed SET in 2009 (27) and even in Europe, only 22% of transfers were SET in 2008 (3). Conversely, in Japan, the proportion of SET among IVF cycles was high: 50% in 2007, 63.6% in 2008, 70.6% in 2009, and 73% in 2010(28) although there was no contract punitive clause for non-observance.

Our results indicate that the incidence of multiple pregnancies drastically declined after the SET recommendation statement was issued. Simultaneous to the reduction in multiple pregnancies, reductions in the incidences of neonatal resuscitation, neonatal NICU admission, preterm delivery, and cesarean section were evident. These results suggest that a higher ratio of SET among IVF cycles in other countries, as Japan, could have profound public health implications by reducing the occurrence of iatrogenic twin pregnancies.

In conclusion, this study indicates that compliance with the SET recommendation improved perinatal outcomes through a reduction in multiple gestation rates. These results suggest than a higher proportion of SET among IVF cycles in other countries as in Japan, could have profound public health implications by reducing the occurrence of iatrogenic twin pregnancies.

Our results also demonstrate that the incidence of monochorionic twins increased with the increased compliance with the SET recommendation, which requires further study.

We sincerely thank Mr. Norio Sugimoto for his help to our statistical analysis. We also thank Professor Yukihiro Terada for valuable advice with regard to interpretation of the results.

There are no conflicts of interest.

9. guidelines in number of the embryos transferred for prevention of multiple pregnancy. Ethics Committee of Japan Society for Reproductive Medicine. http://www.jsrm.or.jp/guideline-statem/guideline_2007_01.html

16. Templeton A, Morris JK. Reducing the risk of multiple births by transfer of two embryos after in vitro fertilization. The New England journal of medicine. 1998;339:573-7

17. Jain T, Missmer SA, Hornstein MD. Trends in embryo-transfer practice and in outcomes of the use of assisted reproductive technology in the United States. The New England journal of medicine. 2004;350:1639-45

20. Thurin A, Hausken J, Hillensjo T, Jablonowska B, Pinborg A, Strandell A. et al. Elective single-embryo transfer versus double-embryo transfer in in vitro fertilization. The New England journal of medicine. 2004;351:2392-402