Background: On in vitro expansion for therapeutic purposes, the regenerative potentials of mesenchymal stem cells (MSCs) decline and rapidly enter pre-mature senescence probably involving oxidative stress. To develop strategies to prevent or slow down the decline of regenerative potentials in MSC culture, it is important to first address damages caused by oxidative stress-induced premature senescence (OSIPS). However, most existing OSIPS study models involve either long-term culture to achieve growth arrest or immediate growth arrest post oxidative agent treatment and are unsuitable for post-induction studies. Methods: In this work, we aimed to establish an OSIPS model of MSCs derived from Wharton's Jelly by hydrogen peroxide (H2O2) treatment. Results: The optimal H2O2 concentration was determined to be 200 µM to achieve OSIPS when MSC reached growth arrest in 3 to 4 passages post-H2O2 treatment. H2O2-treated cells became heterogeneous in morphology, and were irregularly enlarged and flattened with granular cytoplasm. The cells were stained positive for SA-β-galactosidase, a senescence marker, and were shown to express elevated levels of other well-characterized senescence molecular markers, including p53, p21, p16 and lysosomal β-galactosidase (GLB1) in real-time RT-PCR analysis. The OSIPS-like features were confirmed with three independent WJ-MSC lines. Conclusion: The establishment of an OSIPS model of WJ-MSC is a first step for subsequent investigation on molecular mechanisms of senescence and for screening potential anti-oxidative agents to delay or revert stressed-induced senescence.

Clinical advantages in autogenic transplantation of adult mesenchymal stem cells (MSC) have led to increased efforts in MSC research in recent years. MSC is able to differentiate into mesoderm- and non-mesoderm-derived tissues, and is readily obtained from numerous sources of the human adult body, including adult bone marrow and adipose tissues [1,2]. For cell-based therapies, MSCs isolated from donors are expanded in culture prior to validation and transplantation. However, as MSC ages on in vitro culture, MSC shows reduction in self-renewal ability and differentiation potentials [3,4], directly affecting characteristics of MSC and, hence, curative effects in clinical applications.

Senescence is a continuous process initiated from the first cell passage; with each self-renewal step to double the cell number, cells gradually grow older and lose their proliferative potentials due to irreversible growth arrest [5]. Senescent cells exhibit distinctive morphological changes, including flattened appearance, higher granularity, enlargement in size and changes in the ratio of nucleus to cytoplasm [6]. The pattern of gene expression inevitably changes but senescent cells remain metabolically active [7].

Replicative senescence of MSC from elderly donors or MSC in extended culture is characterized by increased expression of a set of senescence markers [8,9]. Cheng et al. demonstrated that senescence related-genes, such as p16, p21 and p53, are upregulated in long-term culture of bone marrow-MSC [10]. Senescence could be trigged by p53 and downstream p53-dependent genes to induce cell cycle arrest [11]. Besides p53, previous studies have linked over-expression of p16 to permanence of senescent state [12,13]. Hence, studies on elucidating the molecular events in MSC senescence are important for understanding and subsequently designing curative effects of MSC in clinical applications.

Oxidative stress is thought to contribute significantly to DNA damage and cellular senescence [14-18]. In senescent fibroblasts and other somatic cells, reactive oxygen species (ROS) is produced due to defective mitochondrial functions [7,19], a role supported by premature senescence when cells are treated with oxidants or cultured under hypoxia conditions [20,21]. On the other hand, ROS involvement in MSC proliferation remains unclear despite reports that antioxidants, or hypoxic conditions, exert positive effects on the growth rate and replicative lifespan of bone marrow- and adipose-derived MSC [22-26]. In molecular terms, oxidative stress has been shown to activate the tumor suppressors p53 and pRB, leading to induction of premature senescence [22,27-29]. Interactions between accumulation of oxidative DNA damages and the repair processes, and the mechanisms and contribution of mitochondrial dysfunctions to senescence are a few of the outstanding issues that remain to be elucidated.

Understanding oxidative stress in MSC would contribute to design of experimental approaches to delay, prevent or revert oxidative stress-induced replicative senescence in MSC cultures. However, there have not been appropriate study models that avoid extended cell culturing to reach senescence, study models that closely resemble the onset of replicative senescence in long-term culture. Such models are necessary for subsequent studies on the mechanisms of oxidative-stress induced premature senescence (OSIPS). In this work, we aimed to establish an OSIPS model to enable anti-senescence modeling and for subsequent use for developing anti-senescence strategies.

The positive blue staining of β-galactosidase was used as a biomarker of cellular senescence. For assessment of SA-β-gal activity, the cells were fixed with 3% paraformaldehyde for 30 min, washed with PBS, and stained with a SA-β-gal detecting kit (Cell Biolabs Inc., USA) according to the manufacturer's instruction and examined under a phase contrast microscope. Expression of senescence-associated SA-β-gal activity which is present only in senescent cells and is not found in pre-senescent, quiescent, or immortal cells is detectable at pH 6.0 in senescent cells. Staining was done overnight at 37 oC. To avoid staining due to cell confluence rather than to proliferative senescence, the assay was performed in sub-confluent cultures displaying comparable cell density.

Total RNA was isolated from hMSC using RNeasy Plus Mini Kit (Qiagen, USA). One microgram of RNA was used for cDNA synthesis using the Phusion RT-PCR kit (Thermo Scientific, EU) according to the manufacturer's instructions. Ten times diluted cDNA was used for quantitative RT-PCR using a SYBR select master mix kit (Applied Biosystems, USA) in an Rotor-Gene Q (Qiagen) thermal cycler and the final volume of PCR reaction was 20 μl. The following primers were used for qPCR analysis: GAPDH, forward: 5'-AGCCACATCGCTCAGACACC-3' and reverse: 5'-GTACTCAGCGGCCAGCATCG-3'; p53, forward: 5'-TTGAGACTGGGTCTCGCTTT-3' and reverse: 5'-AAATGCAGATGTGCTTGCAG-3'; p21, forward: 5'-GCCTGGACTGTTTTCTCTCG-3' and reverse: 5'-ATTCAGCATTGTGGGAGGAG-3'; p16, forward: 5'-CACGGGTCGGGTGAGAGT-3' and reverse: 5'-CCCAACGCACCGAATAGTTAC-3'; lysosomal β-galactosidase (GLB1), forward: 5'-CCTACATCTGTGCAGAGTGG-3' and reverse: 5'-TTCATCTTGGGCAGAAGGAC-3'. PCR was carried out with the following conditions: 50 °C for 2 min, 95 °C for 2 min followed by 40 cycles of 95 °C for 15 s and 60 °C for 1 min. The melting curves for a number of PCR products are single-peaked. Data was analyzed by using the comparative ΔΔCt method, and the mRNA expressions of p16, p21, p53 and GLB1 were normalized to the GAPDH expression. Reactions were performed in triplicate. Data were analyzed by Student's t test. P<0.05 is considered statistically significant.

Comparison of Wharton jelly-derived MSC (WJ-MSC) and bone marrow-derived (BM)-MSC. (a) Cumulative population doubling of WJ- and BM-MSCs. Senescence observed on (b) WJ-MSC and (c) BM-MSC from passage 5 or 6 cultured to P11 (black arrows) after morphology examination and SA-β-gal staining. Scale bar: 100 µm. 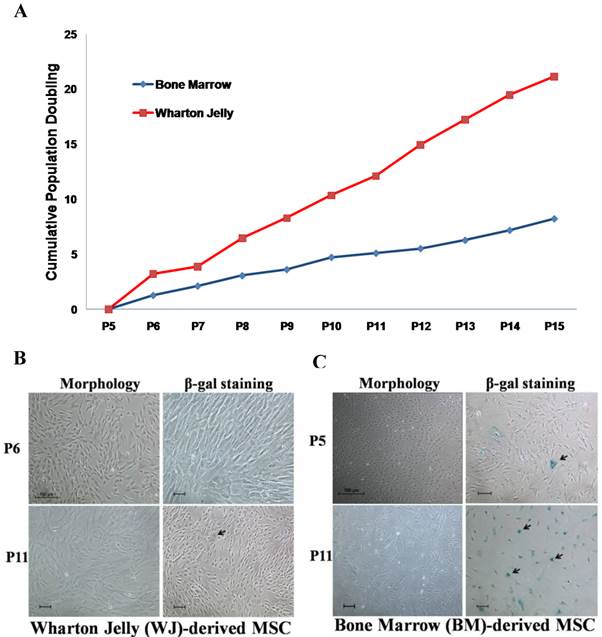 Wharton's Jelly (WJ) and bone marrow (BM)-derived mesenchymal stem cells (MSC) are two MSC sources that are frequently used in the development of cell therapy protocols. Prior to attempts in generating OSIPS cells using H2O2, the growth characteristics of WJ-MSC and BM-MSC were first compared in extended culture (Fig. 1). It was found that the growth of WJ-MSC was more robust and had a growth rate approximately twice that of BM-MSC (Fig. 1A). When cultured from passage 6 to 11, the morphology of WJ-MSC remained unchanged, and there was little SA-β-gal staining (Fig. 1B), indicating that WJ-MSC had not gone into senescence. The results are consistent with previous reports that WJ-MSC requires a greater number of passages in culture to enter senescence, and can retain stemness properties for a longer period time in vitro [31-33]. On the other hand, culturing BM-MSC from passage 5 to 11 resulted in the cells displaying senescence characteristics in being enlarged and flat in shape (Fig. 1C, left panels). Retarded growth rates were also reflected in the passage 11 BM-MSC culture which stained positively for SA-β-gal (Fig. 1C, right panels) further indicating senescence. Our results are in agreement with the study reported by Cheng et al. in which senescence for BM-MSC was observed as early as the 7th or 8th passage [10]. The cells became retarded in proliferation rates, and were enlarged with irregular shape after long-term culture in vitro. Based on the growth characterisation described above, WJ-MSC was chosen for subsequent H2O2 treatment. 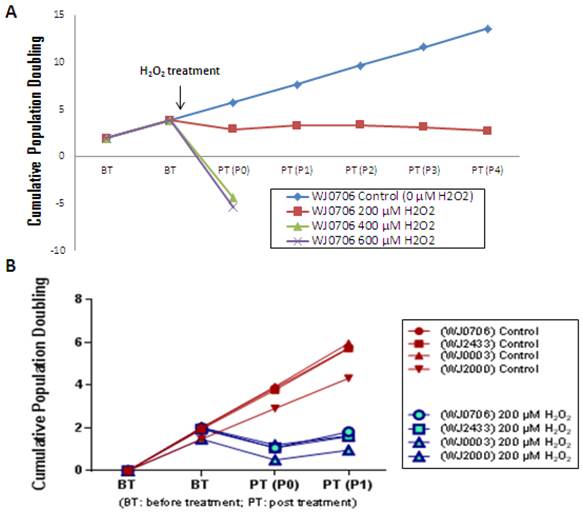 To determine the optimal concentration of H2O2 in inducing senescence, WJ-MSC was cultured in a medium containing various concentrations of H2O2. The growth rate of the cells was clearly retarded when cultured in the presence of 200 μM H2O2 (Fig. 2A). The cells were able to undergo 3-4 passages post-treatment prior to complete growth arrest. In contrast, the growth of WJ-MSC was found to be arrested on treatment with 400 and 600 μM H2O2, and the cells were not viable on replating. Cells treated with 200 μM H2O2 resembled the replicative senescence growth retardation of late-passage senescence cells (data not shown). This concentration was reproducibly applied to four different independent WJ-MSC sources (Fig. 2B) and was used in subsequent experiments. Different types of cells respond differently to H2O2-induced oxidative stress. Kim et al. [34] reported that low concentrations of <10 μM H2O2 stimulated cell proliferation in fibroblasts, whereas intermediate concentrations of ~150 μM resulted in growth arrest and caused senescence, and >400 μM high concentrations of H2O2 promoted apoptotic cell death. Similar cellular effects of H2O2 have also been reported in vascular smooth muscle cells [35].

We further examined the morphological changes of 200 μM H2O2-treated WJ-MSC. On day 3 post-treatment prior to passaging, and on day 7 after the first passage, the cells became irregular, large and flatten in shape, multinucleated and were heavily granulated (Fig. 3A). These morphological alterations are consistent with reported morphological changes for senescent cells. The cells were positively and strongly stained with SA-β-gal when first passaged on day 7, or passaged for the third time on day 27 after treatment, indicating the occurrence of senescence in H2O2-treated cells (Fig. 3B). To further validate senescence, real-time RT-PCR analysis of expression of the senescence-related gene markers, namely p53, p21, p16 and GLB1, was performed in three different H2O2-treated WJ-MSC lines (Fig. 4). Relative to the respective untreated parental cells, the four markers were generally upregulated, albeit to various extents, with the possible exception of p53. Furthermore, different WJ cell lines appeared to display different expression profiling patterns. The p53 gene was apparently downregulated in H2O2-treated WJ2000 cells; p53 levels in the other two WJ cell lines were also only slightly upregulated. p16 and p53 were clearly up-regulated by 2-fold or more in WJ0706 and WJ2000, but the p16 level did not seem to be much affected in WJ2433. Similarly, the β-galactosidase GLB1 gene levels were also up-regulated to different levels in different WJ lines. Taken together, generally upregulation of senescence-related markers supports H2O2-induced senescence in WJ cells. 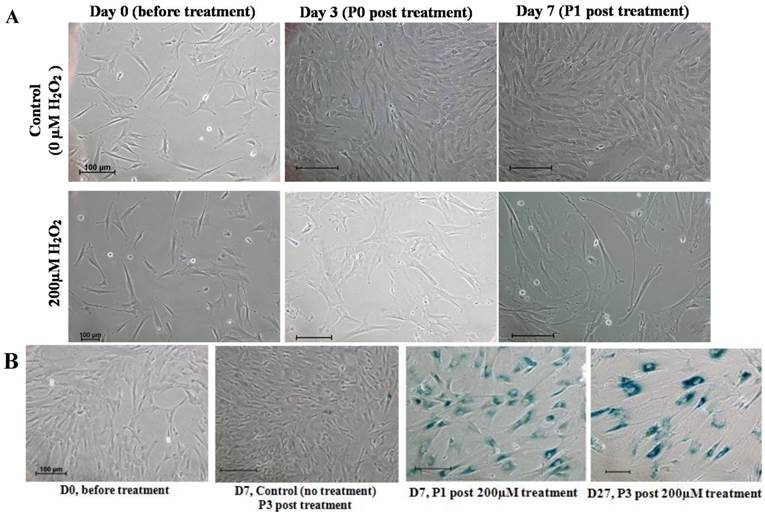 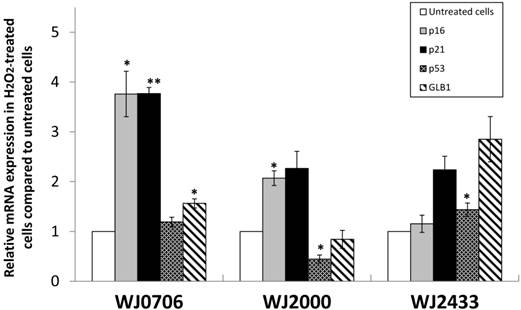 The present work demonstrated the possibility of using subcytotoxic concentration of H2O2 to induce senescence-like features in Wharton's Jelly derived MSC, a study model which is feasible and useful for future applications in investigation on molecular events regulating OSIPS, and in applications for screening anti-oxidants that retard, prevent or reverse OSIPS. Human umbilical cord blood-derived MSC is high sensitive to oxidative stress compared with other MSC types due to reduced activities of antioxidant enzymes; however, exogenous addition of anti-oxidants, such as PEG-catalase, is able to restore cell resistance of stress [5].

Numerous examples have been reported on the regenerative applications of BM-MSCs, including repair of cardiovascular muscles, bone and cartilage as well as in treatment of lung fibrosis and coronary artery disease [36-38]. In this work, we show that another neonatal source of MSC, MSC derived from the Wharton's Jelly of the umbilical cord, tolerated H2O2-induced oxidative stress up to 200 μM concentration. For use of lower and subcytotoxic H2O2 concentrations, prolonged treatment may be necessary to induce senescence-like features [39,40]. On the other hand, high concentrations of H2O2 inflect damages to biological macromolecules and delay degeneration and detoxification by cellular enzymes, leading to lethal oxidative damages and eventual cell death [41,42].

Clinical applications of WJ-MSC have only recently been ardently reported [43-45]. Understanding OSIPS in WJ-MSC is a prelude to developing protective measures against stress-induced premature senescence. Resveratrol is one of more successful drugs shown to exert such protective effects under various laboratory conditions in cell and animal models [46-48]. It remains to be investigated if resveratrol exert similar desirable effects on WJ-MSC.

The authors have declared that of no existing competing interests.