Osteoblasts, adipocytes, and various other mesenchymal lineage cells originate from multipotent mesenchymal stem cells, which display differentiation plasticity. Molecular regulators govern cell fate determination and switching, and in normal bone continuous osteoblastogenesis is maintained while adipogenesis appears to be suppressed. A precursor cell type differentiating along a specific cell lineage can be switched by genetic reprogramming into another cell type of a different lineage. Such fate decisions are regulated in part by transcription factors [4-7].

Peroxisome proliferator-activated receptors (PPARs) are ligand-activated transcription factors that belong to the superfamily of nuclear hormone receptors and play important roles in cellular differentiation, development, and metabolism. Three PPARs are currently known, PPARα, PPARβ/δ, and PPARγ. All PPARs share the same molecular mode of action by forming heterodimers with the nuclear retinoid X receptor, followed by binding to peroxisome proliferator response elements on target genes. Expression of PPARα and PPARβ/δ is found ubiquitously, whereas PPARγ is mainly expressed in adipose tissue, macrophages, and colon. PPARγ is very specific to adipogenic differentiation and is induced before transcriptional activation of most adipocyte genes. PPARγ is activated by natural ligands such as polyunsaturated fatty acids and prostaglandin metabolites, and by synthetic ligands such as the anti-diabetic thiazolidinedione group, whose members include rosiglitazone, pioglitazone, and troglitazone. Ectopic PPARγ expression and activation induce adipocyte differentiation in many cell types that are not normally destined for this lineage [8-10]. Several studies have suggested possible adverse effects of PPARγ on bone metabolism. Akune et al. [11] demonstrated that heterozygous PPARγ-deficient (PPARγ +/-) mice exhibit increased bone mass by stimulating osteoblastogenesis from bone marrow progenitors. Endogenous and synthetic PPARγ agonists promote adipogenesis and inhibit osteoblastogenesis in primary bone marrow mesenchymal stem cell cultures. Treatment of mice with synthetic PPARγ agonists decrease bone mineral density by suppressing the dominant osteoblastogenic transcriptional factors: Runx2, osterix, Dlx5, and α1(I)collagen [8,12-14]. However, the effects of PPAR ligands on cultured osteoprogenitor cells remain controversial [9,15]. This study examined the adipogenic activity of cultured human periosteal-derived cells. In addition, the effects of PPAR ligands on osteoblastic differentiation of cultured human periosteal-derived cells were also examined.

Culture and Differentiation of Periosteal-Derived Cells

Osteoblastic differentiation was induced by culture of passage three periosteal cells in osteogenic induction medium composed of DMEM supplemented with 10% FBS, 50 μg/ml L-ascorbic acid 2-phosphate, 10 nM dexamethasone, and 10 mM β-glycerophosphate at a density of 3 × 104 cells/well in 24-well plates. Cells were differentiated for 21 days, with media changed every 3 days.

Total RNA was extracted from differentiating periosteal cells (cultured for various times in either adipogenic or osteoblastic induction media, as indicated) using Trizol® reagent (Invitrogen/Life Technologies Corp., CA, USA). Five μg of total RNA was reverse transcribed by incubation with 5 pM oligo(dT), 1 mM of each dNTP, and 200 U of Superscript™ III reverse transcriptase (Invitrogen, CA, USA) in a total volume of 20 μl at 50°C for 60 min followed by further incubated at 70°C for 15 min and rapid cooling on ice. Targeted genes were amplified by PCR with the primer sets listed in (Table 1), and products were electrophoresed on a 1.5% agarose gels containing ethidium bromide.

Oil Red O staining was used to identify cytoplasmic lipids in periosteal cells after 14 days of culture. Formaldehyde-fixed cells were stained for 1 h at room temperature with 0.3% Oil Red O (w/v) in 60% isopropanol, washed with distilled water, and visualized under light microscopy.

The alizarin red S technique was used to assess mineralized nodule formation and quantify calcium contents of deposits. Formaldehyde-fixed cells were treated with a 2% alizarin red S solution for 5 minutes and washed with distilled water to remove residual stain. Alizarin red S-stained cultures were incubated with 100 mM cetylpyridinium chloride (Sigma-Aldrich, MO, USA) for 2 hours to release calcium-bound alizarin, which was measured at 570 nm with a microplate reader. Alizarin red S staining was evaluated at day 21 of culture.

All experiments were performed using triplicate cultures, with the results expressed in each experiment as the mean±standard deviation (SD). Statistical analyses were conducted using the GraphPad Prism software (GraphPad Software, CA, USA). Data were evaluated by one-way ANOVA with Tukey's multiple comparison tests. Differences with a p-value <0.05 were considered statistically significant. 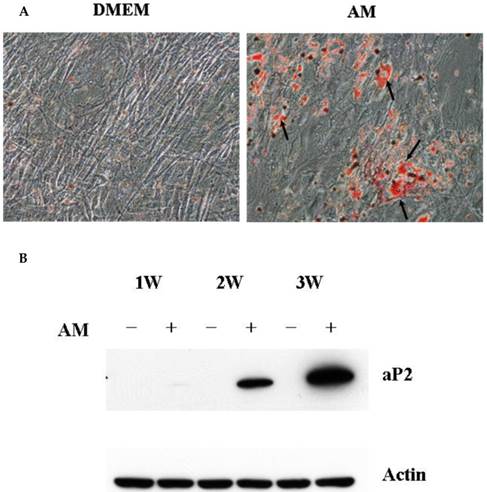 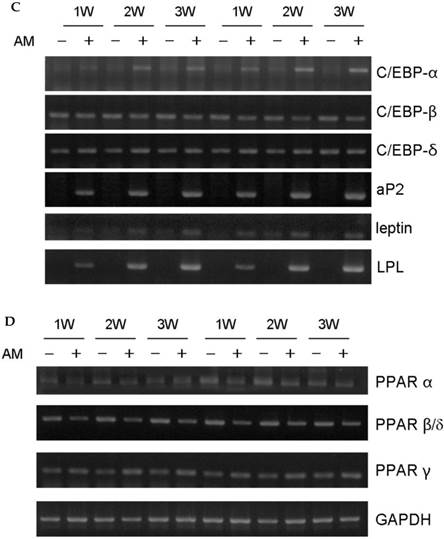 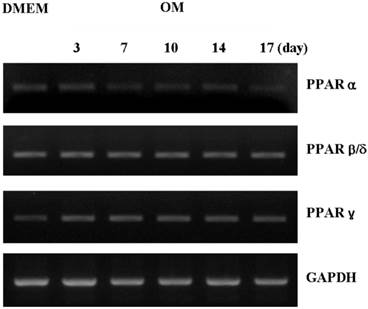 Treatment with either the PPARα agonist (WY14643) or the PPARγ agonist (pioglitazone) did not affect ALP histochemical activity in the periosteal-derived osteoblastic cells. However, both PPARα antagonists (GW6471) and PPARγ antagonist (T0070907) clearly decreased ALP activity in a concentration-dependent manner during 14 days in culture. PPARγ antagonist with T0070907 reduced ALP activity to a greater extent that did PPARα antagonist with GW6471 in periosteal-derived cells that were cultured in osteoblastic differentiation medium (Fig. 3).

Histochemical staining of ALP activity in periosteal-derived cells differentiated in osteoblastic induction media and treated with PPARα or PPARγ ligands. A: The PPARα agonist WY14643 did not affect ALP activity; however, the PPARα antagonist GW6471 decreased ALP activity in a concentration- and time-dependent manner during the 2 week culture period. B: Similar to the effects of PPARα ligands, treatment with the PPARγ agonist pioglitazone did not affect ALP activity in the periosteal-derived cells during osteoblastic differentiation, while, PPARγ antagonist with T0070907 definitely decreased ALP activity in a concentration-dependent manner. OM; osteogenic induction DMEM medium. 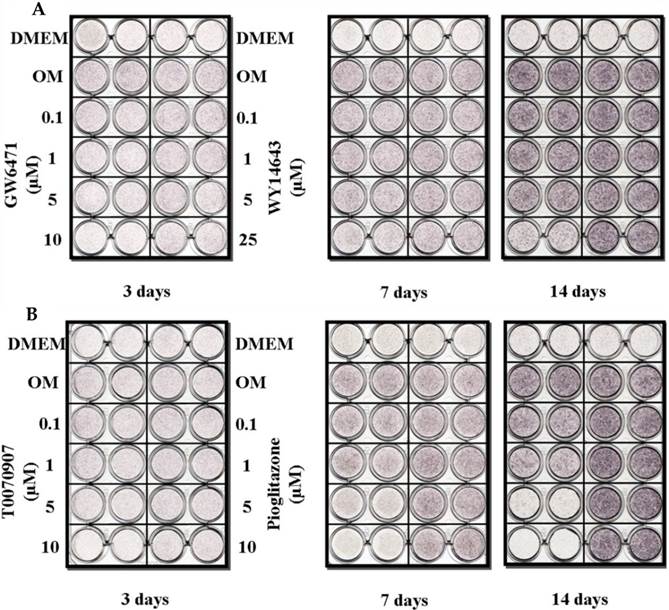 Effects of PPARα or PPARγ Ligands on Mineralization 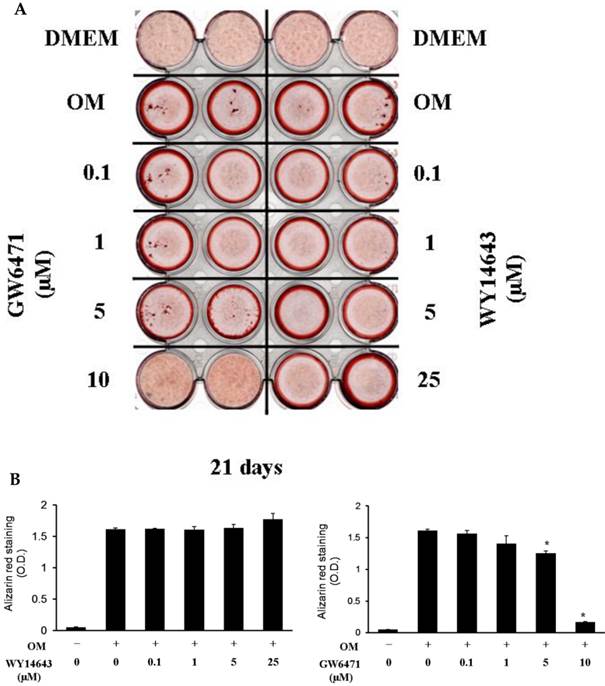 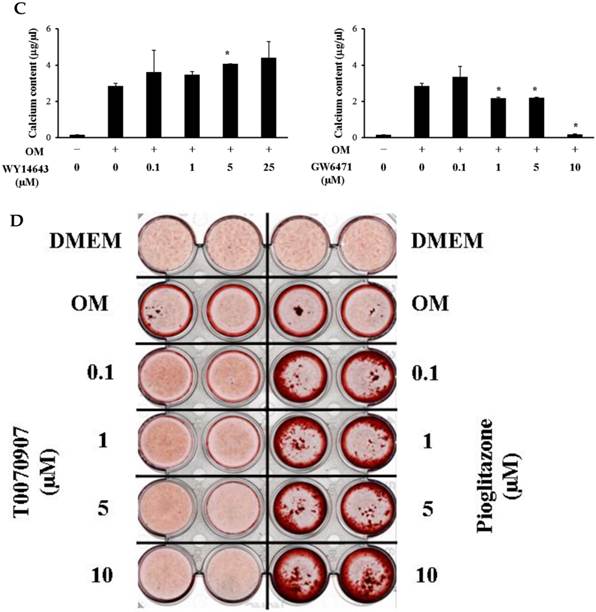 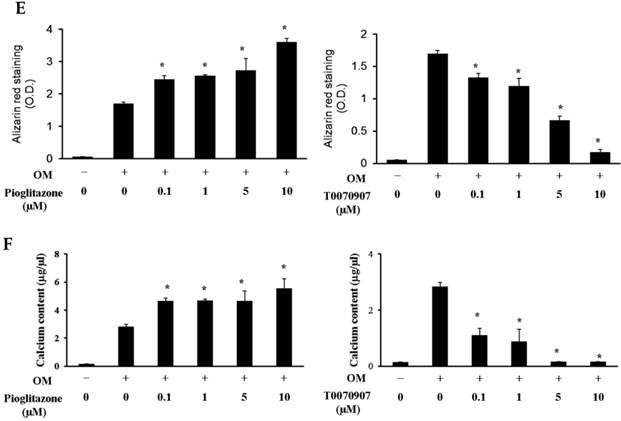 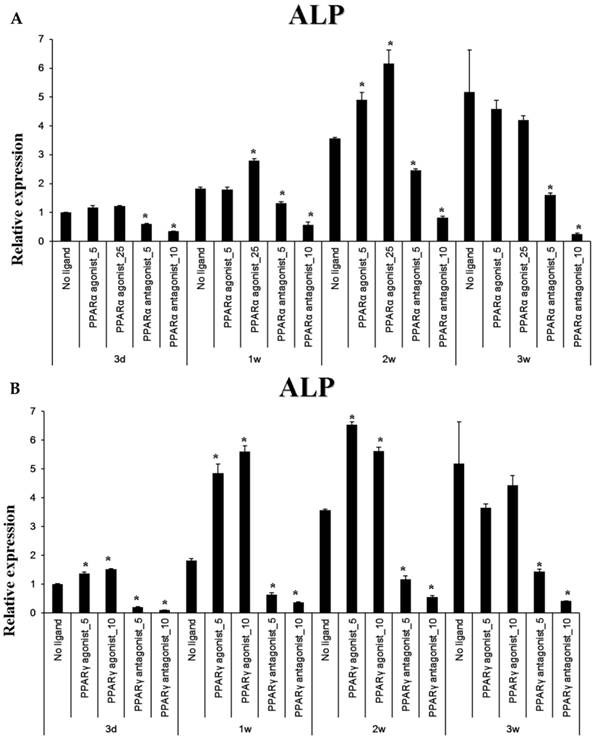 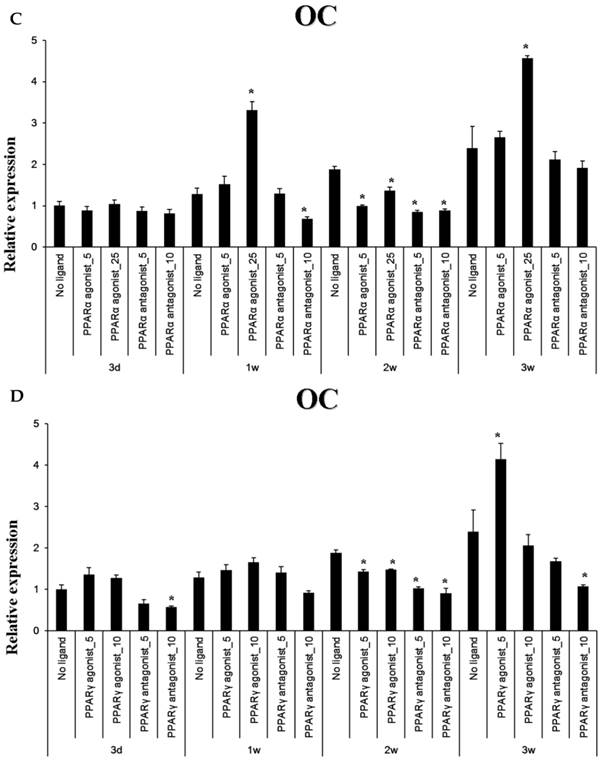 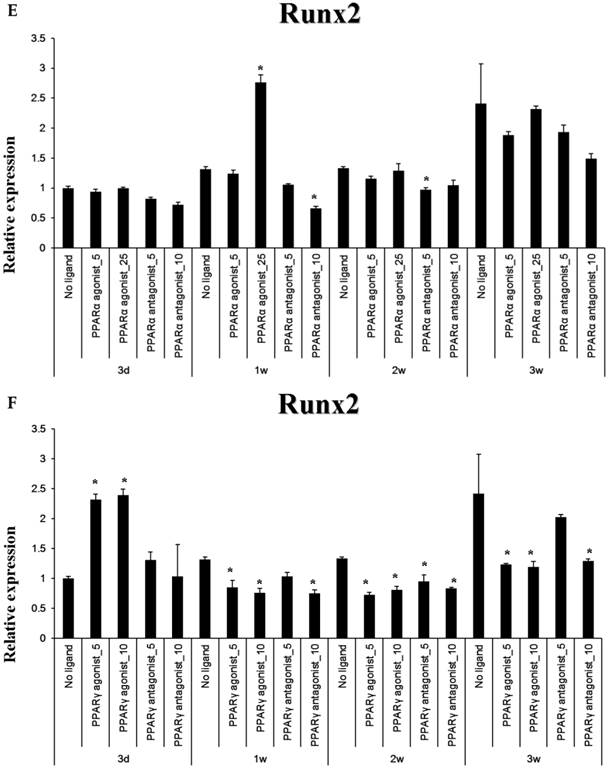 Mesenchymal stem cells are a multipotent cell type that can give rise not only to osteoblasts, but also to a range of other cell types including adipocytes, chondrocytes, and myoblasts. The differentiation fate of mesenchymal stem cells is determined in large measure by a complex interplay of extracellular signaling molecules such as growth factors, hormones, and nutrients that affect the expression and activation of lineage-specific transcription factors. The key transcription factors Runx2 and PPARγ act as molecular switches to direct differentiation of precursor cells into osteoblasts or adipocytes, respectively. Recent studies have shown that PPARγ activity directly inhibits osteogenesis by diverting mesenchymal stem cells from the osteogenic phenotype to the adipogenic lineage. This shift in mesenchymal stem cell differentiation to favor the adipocyte lineage over the osteoblast lineage directly contributes to imbalances in bone formation and resorption, and ultimately leads to bone loss [8,10,17,18].

In this study, we have examined the effects of PPARα and PPARγ ligands on in vitro osteoblastic differentiation of cultured human periosteal-derived cells. The expression of PPARβ/δ was constant in the periosteal-derived cells cultured with or without osteogenic induction medium, so we did not examine effects of PPARβ/δ ligands on osteoblastic differentiation of these cells.

To our knowledge, evidence regarding the effects of PPAR ligands on cultured human periosteal-derived cells has been limited. The primary findings of this study are that PPARγ agonist stimulates osteoblastic differentiation of cultured human periosteal-derived cells and PPARα and PPARγ antagonists inhibit osteoblastic differentiation in these cells. Further study is needed to clarify the mechanisms of PPAR-regulated osteogenesis.

This research was supported by Basic Science Research Program through the National Research Foundation of Korea (NRF) funded by the Ministry of Education, Science and Technology (2012R1A1A2038795). This study was also supported by a grant of the Korean Health Technology R&D Project, Ministry of Health & Welfare, Republic of Korea (HI13C1596).