Background: Although the protective effects of levocarnitine in patients with ischemic heart disease are related to the attenuation of oxidative stress injury, the exact mechanisms involved have yet to be fully understood. Our aim was to investigate the potential protective effects of levocarnitine pretreatment against oxidative stress in rat H9c2 cardiomyocytes.

Methods: Cardiomyocytes were exposed to H2O2 to create an oxidative stress model. The cells were pretreated with 50, 100, or 200 μM levocarnitine for 1 hour before H2O2 exposure.

Conclusion: Our in vitro study indicated that levocarnitine pretreatment may protect cardiomyocytes from oxidative stress-related damage.

Despite significant improvement in treatment strategies in recent years, ischemic heart disease (IHD) remains the leading cause of morbidity and mortality in both the developed [1] and developing countries [2]. Studies from recent decades have confirmed that oxidative stress plays an important role in the pathogenesis and progression of various cardiovascular diseases [3-5], including IHD. Oxidative stress is characterized by excessive reactive oxygen species (ROS) production and reduced cellular antioxidant activity, leading to membrane lipid peroxidation and mitochondrial dysfunction [6]. If oxidative insult persists, programmed cell death will be initiated partially through the mitochondrial pathway, causing the loss of functional cardiomyocytes. Therefore, treatment strategies with the potential to prevent oxidative stress are considered valuable for patients with IHD [7, 8].

Levocarnitine is a naturally occurring essential co-factor of fatty acid metabolism that is synthesized endogenously or obtained from dietary sources [9]. Physiologically, levocarnitine transports free fatty acids into the mitochondria, increasing the preferred substrate for oxidative metabolism in the heart [10]. As β-oxidation of fatty acids is the major biogenesis process of the heart, and metabolic and energy dysfunction are acknowledged to play key roles in the pathogenesis of various cardiovascular diseases [11, 12], it is reasonable to hypothesize that levocarnitine supplementation may benefit IHD patients, perhaps by restoring energy and metabolic functions. Indeed, previous human studies suggested that levocarnitine supplementation was associated with significantly reduced mortality in patients experiencing acute myocardial infarction [13-15]. Although some early experimental studies reported that the protective effects of levocarnitine in IHD patients were related to the attenuation of oxidative stress injury in the myocardium [16, 17], the exact mechanisms involved are still not fully understood.

We first determined the appropriate concentration of H2O2 (Sigma-Aldrich, St Louis, MO, USA) for mimicking oxidative stress-induced injury in cardiomyocytes. In the preliminary study, H9c2 cells were treated with 200, 400, 600, 800, 1000, and 2000 μM H2O2 for 12 hours. We defined the appropriate H2O2 concentration as the lowest concentration that would lead to substantially reduced (about 50%) H9c2 cell viability when cells were treated for a relatively long duration, such as 12 hours. Viability was decreased in about 57% of H9c2 cells following 12-hour treatment with 200 μM H2O2. Therefore, we treated H9c2 cells with 200 μM H2O2 for 12 hours to establish the oxidative stress-induced injury model in cardiomyocytes; selection of the H2O2 concentration was also consistent with that of previous studies [19, 20].

Then, we evaluated the potential protective effects of levocarnitine (Sigma-Aldrich) against oxidative stress-induced injury in H9c2 cardiomyocytes through pretreatment with 10, 50, 100, 200, 500, 1000, 1500, or 2000 μM levocarnitine 1 hour prior to H2O2 exposure. We selected the three most effective concentrations for subsequent analyses.

Cell viability was assessed using Cell Counting Kit-8 (Sigma-Aldrich) according to the manufacturer's instructions. Briefly, H9c2 cells from the different treatment groups were seeded in 96-well plates at 103 cells/well (104 cells/mL, 100 μL/well) and 10 μL CCK-8 solution was administered into each well to determine cell viability. After 4-hour incubation at 37°C, the absorbance in each well was detected at 450 nm (reference 650 nm) using a microplate reader (Tecan GENios, Austria). Each experiment was repeated five times and the data were expressed as a percentage of the control.

On its own, the fluorescent probe 29, 79-dichlorofluorescein diacetate (DCFH-DA) is non-fluorescent, and can cross cell membranes freely. Esterases hydrolyze intracellular DCFH-DA to produce DCFH, and intracellular ROS can oxidize the non-fluorescent DCFH to generate fluorescent 29, 79-dichlorofluorescein (DCF). Intracellular ROS in H9c2 cells were thus detected based on the fluorescence intensity of DCF in a fluorometer using an ROS detection kit according to the manufacturer's instructions (Beyotime Institute of Biotechnology). Briefly, cells were washed twice with phosphate-buffered solution (PBS) after treatment, and then the ROS detection solution was added. Cells were stained at 37°C in the dark for 20 min and visualized by fluorescence microscopy (Leica, Germany). Fluorescence was read on a confocal laser scanning microscope (TCS SP5 AOBS, Leica) at 504 nm excitation and 524 nm emission wavelengths. Fold-increases in ROS level were determined by comparison with the control group.

Lactate dehydrogenase (LDH) activity was measured as LDH released in the culture medium. Briefly, 0.2 mL culture medium from each group was obtained after treatment and assayed for LDH activity using commercial kits (Beyotime Institute of Biotechnology) and a microplate reader (Tecan GENios) according to the manufacturer's instruction.

After treatment, cells from each group were washed with cold PBS three times, harvested with 0.25% trypsin, and centrifuged at 1000 ×g for 10 min. The supernatant was discarded and the cell pellet sonicated in cold PBS. After centrifugation (800 ×g, 5 min), the supernatant was immediately evaluated for malondialdehyde (MDA), superoxide dismutase (SOD), and glutathione peroxidase (GSH-Px) cellular activity using commercial kits (Beyotime Institute of Biotechnology) with a spectrophotometer according to the manufacturer's protocols. The protein content of the cell homogenates was determined using a bicinchoninic acid assay according to the kit instructions.

We used 5,5',6,6'-tetrachloro-1,1',3,3'-tetraethylbenzimidazolyl-carbocyanine iodide (JC-1; Sigma-Aldrich) to determine changes in mitochondrial transmembrane potential (ΔΨm). JC-1 (10 μL; 200 μM; final concentration 2 μM) was added to H9c2 cells on coverslips, incubated for 45 min in the dark, and washed twice with PBS. JC-1-labeled cells were observed under a confocal laser scanning microscope (TCS SP5 AOBS). JC-1 fluorescence was measured from a single excitation wavelength (490 nm) with dual emission (shift from green at 530 nm to red at 590 nm). Loss of mitochondrial ΔΨm is presented as the relative ratio of green to red fluorescence.

Cellular adenosine triphosphate (ATP) was measured by an ATP Bioluminescence Assay Kit according to the manufacturer's instructions (Beyotime Institute of Biotechnology). After treatment, cells were washed with PBS, lysed, and the supernatant collected. Proteins (10 μg/20 μL) were added to a white OptiPlate (PerkinElmer, Waltham, MA, USA) and the reaction initiated by adding reconstituted reagent. Luminescence was measured using a microplate reader (Tecan GENios).

Apoptosis was measured with a commercial kit (Beyotime Institute of Biotechnology) as recommended by the manufacturer. Approximately 105 H9c2 cells were stained for 15 min with annexin V-fluorescein isothiocyanate and propidium iodide at room temperature in the dark. Apoptosis was analyzed by flow cytometry with a cytometer (BD LSRII; BD Biosciences, San Diego, CA, USA). Distribution of apoptotic cells was analyzed using FlowJo 7.6 software (TreeStar, Ashland, OR, USA).

SPSS 17.0 (SPSS Inc., CA, USA) was used for statistical analysis. Results are expressed as the mean ± SEM. Statistical differences among groups were analyzed by two-way analysis of variance (H2O2 × Levocarnitine), followed by the least significant difference test. Statistical significance was indicated when p < 0.05. 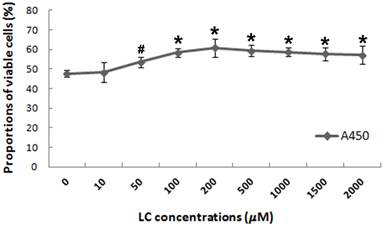 To confirm the protective effects of levocarnitine pretreatment against oxidative stress-induced cell injury, we measured LDH release in each group. Plasma LDH activity reflects the cell membrane damage caused by oxidative stress. LDH activity in the culture medium of the model group was significantly higher than that in the control group (p< 0.05, Figure 2), suggesting that 12-hour H2O2 exposure led to severe cell injury. It appeared that levocarnitine pretreatment significantly reduced the levels of LDH activity in a dose-dependent manner. 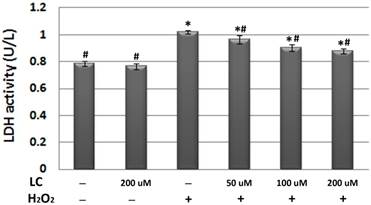 To evaluate whether the protective effects of levocarnitine on H9c2 cardiomyocytes were related to reduced oxidative stress, we evaluated the effects of levocarnitine pretreatment on intracellular ROS in H9c2 cells. H2O2 exposure increased cellular ROS production significantly, reflected by the higher DCF-DA fluorescence intensity in the model group compared with the control group (p< 0.05, Figure 3). 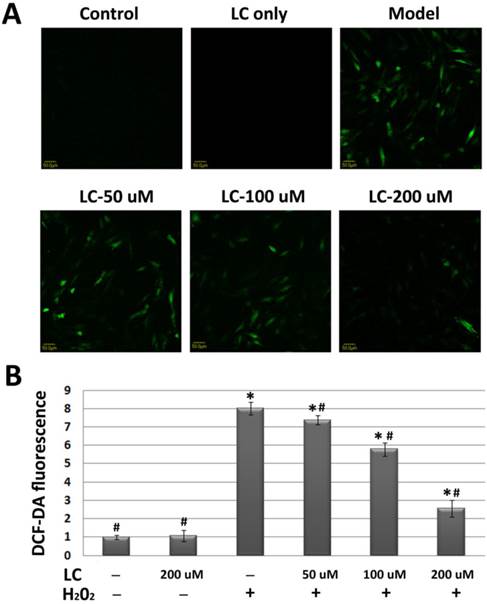 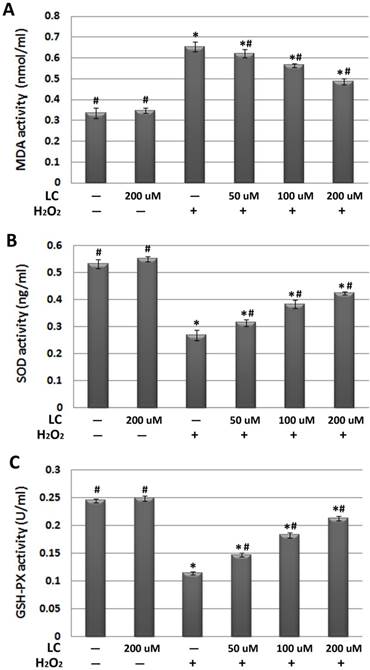 As oxidative stress and related mitochondrial dysfunction may lead to cardiomyocyte apoptosis, which has been recognized as playing a key role in the pathogenesis and progression of various cardiovascular diseases [24], we investigated the effects of levocarnitine on H2O2-induced cardiomyocyte apoptosis. In this study, cells were distinguished as living (annexin V-/propidium iodide [PI]-), early apoptotic (annexin V+/PI-), late apoptotic (annexin V+/PI+), and necrotic (annexin V-/PI+). Flow cytometry analyses (Figure 7 and Table 1) indicated that levocarnitine pretreatment was associated with significantly reduced early- and the late-phase oxidative stress-induced apoptosis, perhaps dose-dependently. Additionally, there remained more living cells in the levocarnitine-pretreated groups as compared with the model group. 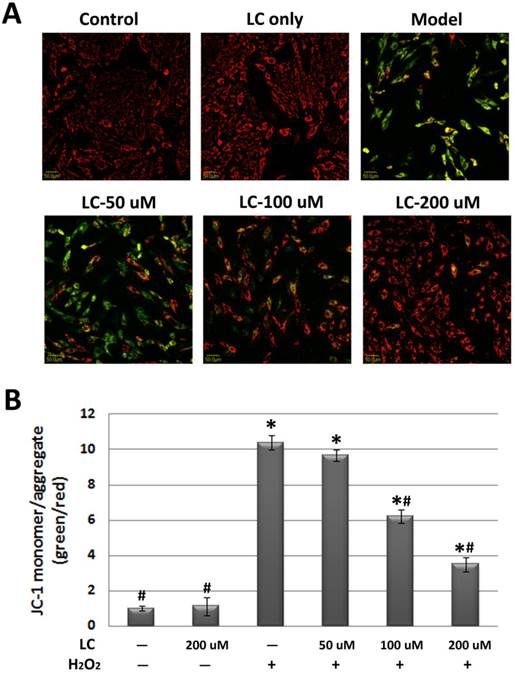 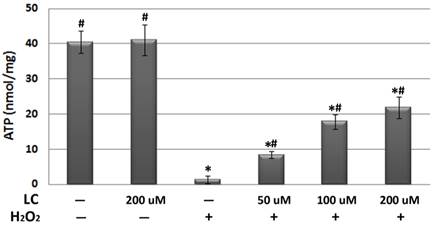 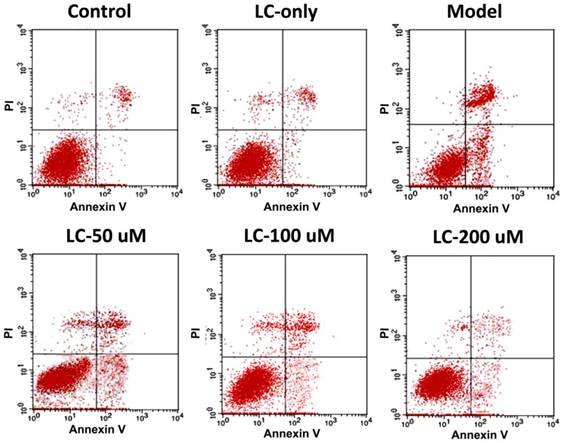 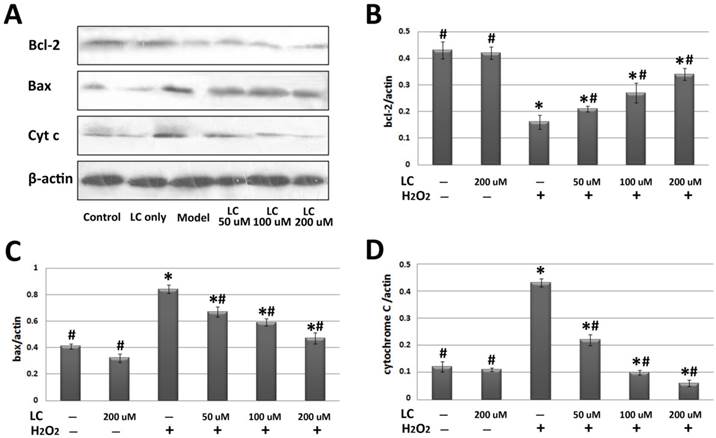 We created a model of H2O2-induced oxidative stress in H9c2 cardiomyocytes and found that H2O2 exposure led to significant activated oxidative stress in the cells, which was characterized by reduced cell viability, increased intracellular ROS and lipid peroxidation, and reduced intracellular antioxidant activity. Mitochondrial dysfunction was also observed following H2O2 exposure, reflected by the loss of mitochondrial ΔΨm and intracellular ATP. These pathophysiological processes led to apoptosis by activation of the intrinsic apoptotic pathway. More importantly, the 1-hour levocarnitine pretreatment significantly attenuated the above H2O2-induced oxidative injury, preserved mitochondrial function, and partially prevented apoptosis during the oxidative stress reaction. The potential protective effects of levocarnitine pretreatment against oxidative stress-related injury in H9c2 cells appeared dose-dependent. These results expand our insight into the potential benefits of levocarnitine for patients with oxidative stress-related cardiovascular diseases, such as IHD.

In addition to energy metabolism, another important function of the mitochondria is the regulation of apoptosis. During oxidative stress, excessive ROS production, most likely from both H2O2 treatment and subsequent mitochondrial damage, may create a vicious cycle by leading to severe mitochondrial membrane damage, loss of mitochondrial ΔΨm, and subsequent cytochrome C release, thus initiating the intrinsic apoptotic pathway [33]. Moreover, some apoptotic process regulatory proteins, including Bcl-2 and Bax, are located in the mitochondrial membrane. Imbalance of these regulatory proteins also has an important effect on apoptosis [34]. Our findings demonstrate that levocarnitine pretreatment may also attenuate oxidative stress-induced cardiomyocyte apoptosis via regulation of the intrinsic apoptotic pathway and Bcl-2 family proteins. As loss of functional cardiomyocytes is one of the important mechanisms in the pathogenesis and progression of cardiovascular diseases [35], the benefits of levocarnitine against oxidative stress-induced cardiomyocyte injury may also include attenuation of apoptosis.

In conclusion, our in vitro study indicated that levocarnitine pretreatment may protect cardiomyocytes from oxidative stress-related damage by inhibiting ROS production, increasing intracellular antioxidants, preserving mitochondrial function, and attenuating apoptosis. These results may partially explain the clinical benefit of levocarnitine in patients with prior myocardial infarction [15]. These results require verification in animal studies in the future.