Sebaceous glands (SG) undergo cyclic growth, degeneration, and rest, which depend on cyclical changes of sebaceous gland stem cell (SGSC) activity. But after grafting, hair follicle stem cells (HFSCs) are competent to differentiate into sebocytes [1-3]. HFSCs located in the hair follicle bulge, can be characterized by CD34 and SOX-9 expression [4-5]. HFSCs periodically provide cell resources for hair follicles. Previous studies also demonstrated that 12-O-tetradecanoyl-phorbol-13-acetate (TPA) can recruit HFSCs to maintain skin homeostasis and contribute to papilloma, squamous cell carcinoma and basal cell carcinoma [3,6,7]. However, it remains unknown whether the renewal of sebaceous neoplasms (SNs) induced by TPA is dependent on HFSCs.

The Wnt/β-catenin signaling pathway plays an important role in cell fate determination, proliferation and differentiation [8,9], and is involved in regulating SG development. When Lef-1 was functionally blocked, HFSCs differentiated into SGs [10]. Although β-catenin was up-regulated in SNs [11], how the Wnt signaling pathway affects SN development has not been extensively studied.

To better explore these questions, we used DMBA combined with TPA to induce SNs and investigated the morphological and differentiation characteristics of SNs. Next, we detected the activity of HFSCs and expression of key molecules in the Wnt10b/β-catenin signaling during neoplasm induction. Our results indicate that the abnormal activation of HFSCs involves in the development of SNs and activation of the Wnt10b/β-catenin signaling.

Seven-week-old female C57BL/6 mice were obtained from the animal center of Third Military Medical University. The mouse dorsal skin was shaved and dosed with 100 μg DMBA for tumor initiation. A week later, all mice were treated with 4 μg TPA weekly for neoplasm promotion [12]. Six months later, the neoplasms and adjacent relatively normal tissues were harvested, and then the neoplasms were divided into young (size < 2 mm) and older (size > 2 mm) types [13]. Sebaceous neoplasms were characterized according to the histopathological criteria as follows [35,36]: (1) Sharp circumscription, symmetry, and smooth borders; (2) Aggregations of basaloid undifferentiated sebocytes surrounding mature vacuolated sebocytes; (3) small, monomorphous nuclei without pleomorphism or nuclear atypia in the constituent basaloid cells; (4) No palisade arrangement of the nuclei arround the aggregations. All the animal-related procedures were conducted in strict concert with the protocols of institutionally approved animal care and maintenance.

Specimens were fixed in 4% paraformaldehyde solution and rehydrated in 30% sucrose solution overnight. They then were placed in a small sealed box and frozen in liquid nitrogen for 20 seconds. Specimens then were kept at -20°C for 15 minutes, embedded in optimal cutting temperature compound and sectioned to 12μm thick slides in a cryostat. The slides were stained by Oil Red O solution for 10 min at room temperature, differentiated in 60% isopropyl alcohol, rinsed in distilled water and stained with hematoxylin for 1 min.

Skin specimens were fixed in 4% paraformaldehyde overnight. They were dehydrated, embedded in paraffin and sectioned at 5 μm. Paraffin sections were rehydrated and stained with hematoxylin for 1 min. These sections were then rinsed with water, stained with eosin for another 1 min, and then embedded with resinene.

Induction of the SNs by DMBA/TPA treatment

To investigate the role of HFSCs in SN development, we first induced neoplasms on the dorsal skin of mice using DMBA/TPA treatment. Given that SNs, papilloma and squamous carcinoma can be induced by two-stage skin carcinogenesis experiments, H&E and Oil Red O staining were used to identify the SNs. H&E staining showed that compared with SGs, the young and older SNs, were well-circumscribed, grew out of epidermis and developed plaque structures. The SNs consisted of basaloid cells intermingled with clusters of mature sebocyte-like cells (Fig. 1A). Moreover, Oil Red O stained mature sebocytes in SGs, adipocytes in subcutaneous tissues, as well as mature sebocyte-like cells in sebaceous lobules of the young and older SNs (Fig. 1B). Therefore, for the remainder of our study H&E and Oil Red O staining was used to identify young and older SNs. Seven SNs were identified, of which four were young neoplasms and others were older ones.

Hair follicles and epidermis differentiation markers in the SNs 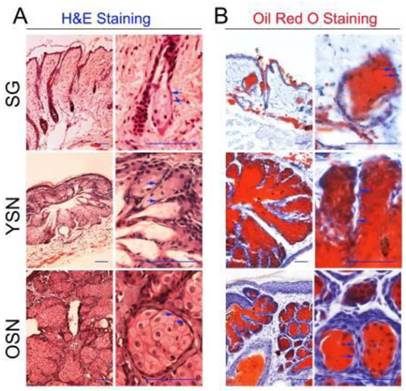 Activated HFSCs exist in the SNs

Up-regulation of Wnt10b/β-catenin signaling in the SNs 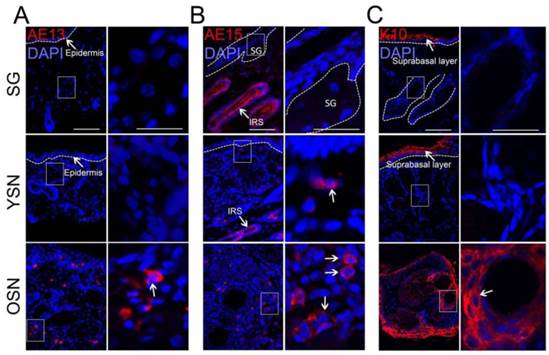 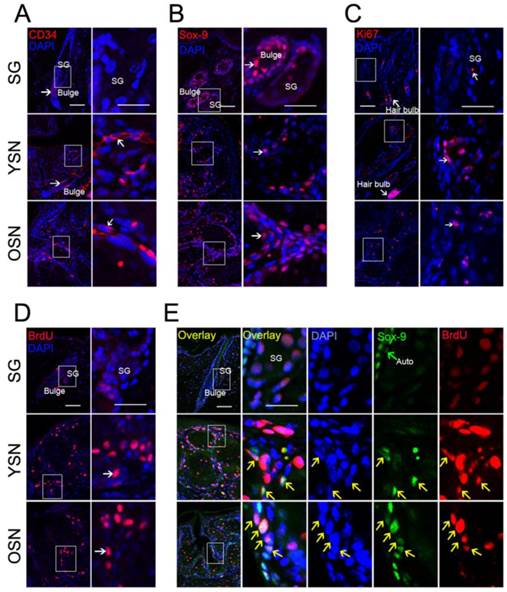 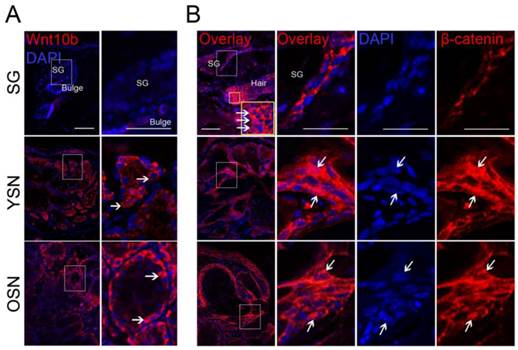 SGs undergo cyclic renewal, independent of HFSC activation. However, HFSCs can migrate towards SGs and provide a cell source for SGs when SG homeostasis is perturbed [21]. Continuous disorder of SGs will lead to SN development. But whether and how HFSCs contribute to SN development needs further investigation.

To address these questions, neoplasms were first developed on mouse skin using DMBA/TPA treatment. Morphologic identification showed that SNs consist of sebaceous lobules with Oil red O positive mature sebocytes located in their center. To further confirm the immune-phenotype of SNs, epidermis and hair follicle differentiation markers were examined. Interestingly, they were all expressed in the SNs. A neoplasm is thought to consist of the progeny of a single cell with accumulated mutations. Thus it is possible that these epidermis- and hair follicle-like cells result from cutaneous epithelial cells other than sebaceous gland cells. CD34 and SOX-9 positive cells are believed to be a population of multipotent stem cells with the capacity to differentiate into epithelial cells and sebocytes [5, 21]. Developmentally, SOX9-positive epithelial cells show key properties of adult HFSCs, which they contribute to HF, SG morphogenesis and repair of an injured interfollicular epidermis [5]. SOX9 is essential for maintaining the adult HFSCs [33]. SOX-9 was reported to function as an enhancer of Activin/TGFbeta signaling which inhibits the activation of HFSCs [34]. Thus we speculate that HFSCs may provide sebaceous gland and epithelial cell resources for the SNs. Although Noriyuki et al. reported that K15-marks cell populations in the bulge and base of a hair follicular infundibulum, K15 is also expressed in the SNs [22]. It remains unclear whether bulge HFSCs contribute to SN development. For the first time, our findings suggest that the bulge HFSCs marked by CD34 and SOX-9 were activated in SN development. Distinct from K15, CD34 was specifically expressed in the hair follicle bulge and SOX-9 in both the hair follicle bulge and secondary hair germ. In the present study, CD34 and SOX-9 were both expressed in the basal cells in the young and older SNs. Similarly, Ki67 and BrdU were located in the basal cells in the young and older SNs. Thus we wondered whether bulge HFSCs were activated to proliferate. Based on our data, SOX-9-positive HFSCs in SNs partially colocalized with BrdU-labeled proliferating sebocytes, indicating that these HFSCs were activated to proliferate during SN development. Accordingly, our results show that bulge HFSCs marked by CD34 and SOX-9 are located in the basal cells of SNs and provide a cell source for SN development. Wensheng et al. previously reported that continuous TPA treatment could induce HFSCs to migrate towards epidermis and differentiate into epidermal cells [23]. Additionally, long-term TPA treatment was also found to activate HFSCs and induce regeneration of hair follicles [6, 19]. Thus, TPA may play an important role in activating HFSCs in SN development and may recruit HFSCs towards SGs and promote these cells to differentiate into epithelial cells and sebocytes.

In conclusion, our study confirms that HFSCs marked by CD34 and SOX-9 are located in the basal cells of sebaceous lobules within SNs and involve in SN development. During SN development, HFSCs are activated to differentiate into sebocytes and epithelial cells, and this process is regulated by the activation of the Wnt10b/β-catenin signaling pathway (Fig.5). Our findings advance the understanding of the relationship between HFSCs and SN development, and also show important clinical implications for therapeutic advances in the treatment of SNs.

Schematic drawing showed activated HFSCs contributed to SN development. DMBA combined with TPA treatment disturbed the homeostasis of SGs and induced SN development during which HFSCs were activated and possibly induced to migrate towards SNs. And Wnt10b/β-catenin signaling pathway was activated to promote proliferation and differentiation of HFSCs in SNs. 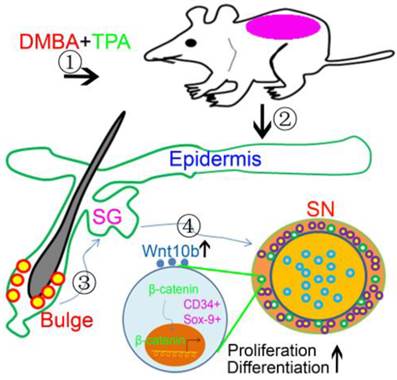 This study was supported by grant 30972645 from the National Nature Science Foundation of China. We thank Dr. Tung-Tien Sun for AE13 and AE15 antibodies. And we appreciate Dr. Randall B. Widelitz (University of Southern California) for carefully revising the manuscript.

7. Panteleyev AA, Rosenbach T, Paus R, Christiano AM. The bulge is the source of cellular renewal in the sebaceous gland of mouse skin. Archives of dermatological research. 2000;292:573-76