Apolipoprotein M (APOM) has been suggested as a vasculoprotective constituent of high density lipoprotein (HDL), which plays a crucial role behind the mechanism of HDL-mediated anti-atherosclerosis. Previous studies demonstrated that insulin resistance could associate with decreased APOM expressions. In agreement with our previous reports, here, we further confirmed that the insulin sensitivity was also reduced in rats treated with high concentrations of glucose; such effect could be reversed by administration of rosiglitazone, a peroxisome proliferator-activated receptor-γ (PPARγ). The present study shows that Apom expression is significantly affected by either rosiglitazone or hyperglycemia alone without cross interaction with each other, which indicates that the pathway of Apom expression regulating by hyperglycemia might be differed from that by rosiglitazone. Further study indicated that hyperglycemia could significantly inhibit mRNA levels of Lxrb (P=0.0002), small heterodimer partner 1 (Shp1) (P<0.0001), liver receptor homologue-1 (Lrh1) (P=0.0012), ATP-binding cassette transporter 1 (Abca1) (P=0.0012) and Pparb/d (P=0.0043). Two-way ANOVA analysis demonstrated that the interactions between rosiglitazone and infusion of 25% glucose solution on Shp1 (P=0.0054) and Abca1 (4E, P=0.0004) mRNA expression was statistically significant. It is concluded that rosiglitazone could increase Apom expression, of which the detailed mechanism needs to be further investigated. The downregulation of Apom by hyperglycemia might be mainly through decreasing expression of Pparg and followed by inhibiting Lxrb in rats.

Human apolipoprotein M (APOM) is mainly found in hepatocytes of the liver and tubular epithelial cells in kidney [1], and it could also been expressed weakly in the colorectal tissues [2]. The physiological roles of APOM were explored gradually during recent years. It has recently been documented that APOM can protect endothelium by delivering sphingosine-1-phosphate (S1P) to the S1P1 receptor [3] and enhance the antioxidant effect of high density lipoprotein (HDL), in which the most abundant protein is APOA-I [4]. Also, it has been demonstrated that APOM is important for the formation of preβ-HDL and cholesterol efflux to HDL, which could attenuate atherosclerotic process [5].

We have previously reported that hepatic APOM levels were significantly decreased in hyperglycemic rats, and in cell cultures high concentrations of glucose inhibited APOM expression [6]. It was previously demonstrated that hyperglycemia could increase the flux of free fatty acids (FFAs) by accelerating lipolysis, which may induce or aggravate insulin resistance in the liver and muscle through altering the insulin signaling pathway [7, 8]. In light of evidence that mice with genetic defects of leptin (ob/ob mouse), exhibiting resistance to insulin, also showed significantly lower levels of Apom [9], we speculate that down-regulation of APOM expression by hyperglycemia may be associated with insulin resistance.

Rosiglitazone, a peroxisome proliferator-activated receptor-γ (PPARγ) agonist used for the treatment of type 2 diabetes, is a potent insulin sensitizer that promotes glucose uptake by adipose tissue, skeletal muscle and liver [10-12]. Apart from improving insulin resistance, recent evidences demonstrated that rosiglitazone has multieffects, including attenuating airway inflammation by inhibiting the proliferation of effector T cells [13], reducing hippocampal neuronal damage [14], improving endothelial function [15], increasing cell surface GLUT4 level [16], preventing pulmonary fibrosis [17] and even preventing graft-versus-host disease [18]. However, it remains unknown whether rosiglitazone affects APOM in vivo. In the present study we examined the effects of rosiglitazone and hyperglycemia on Apom expression in a rat's models. According to our previous investigation showing that liver X receptor (LXR) [19, 20] and ATP-binding cassette transporter A1 (ABCA1) [21] could involve in the regulation of APOM expression. In the present study, we further examined the effects of rosiglitazone and hyperglycemia on expression of Pparb/d and genes of LXR signaling pathway including its target gene, Abca1 in rat's models in order to find possible mechanism(s) of Apom regulation by rosiglitazone and hyperglycemia.

Animal experiments. The experimental protocols were approved by the Animal Care and Use Committee of Soochow University, Suzhou, China. In general, each experimental group contained 6-8 adult male Sprague-Dawley rats (250-300g). Rats were commercially obtained from the Shanghai Slac Laboratory Animal Co., China or the Changzhou Cavens Laboratory Animal Co., China. Rats were kept in separate cages in a temperature-controlled (22°C) room with 12-hrs light-dark cycle and were provided with standard rodent chow and water ad libitum. The rats were acclimatized for one week before the experiments.

In the present study, all rats were pre-operated and two small catheters were placed in a jugular vein seven days before the liquid infusion. In brief, rats were anesthetized with 10% chloral hydrate (4ml/kg). Two catheters were placed in a jugular vein, one for infusion of 25% glucose solution (10ml·kg-1·h-1 for 6 h, HuaYu Pharmaceutical Co.) or insulin solution (10mU·kg-1·min-1 during HEC (hyperinsulinemic euglycemic clamp), Wanbang Biopharmaceuticals) and another for infusion of 20% glucose solution (during HEC). An additional catheter was placed in a carotid artery for blood sampling (also seven days before the experiments). The free ends of both catheters were attached to long segments of steel tubing and tunneled subcutaneously on the back of the neck. The catheters were flushed with isotonic saline containing 50 IU/ml heparin (Qianhong Bio-pharma Co.) and filled with a viscous solution of heparin (500 IU/ml) and 300 g/L polyvinyl pyrolidone (PVP-10; Sigma) to prevent refluxing of blood into the catheter lumen.

Reverse transcription and real-time RT-PCR. Total RNA in rats' tissues was extracted according to the manufacturer's instructions using a total RNA purification kit (Omega Bio-Tek). The quality of the RNA samples was determined by the absorbance measurements at 260/280 nm. Using the first strand cDNA synthetic kit (Qiagen) according to the manufacturer's instructions, 2μg total RNA was reverse transcribed to cDNA. The mRNA levels of the target and reference genes were measured under real-time PCR using TaqMan technology. The PCR primer sets were designed according to the information of GenBank, as listed in Table 1. B-actin was used as reference genes. Relative standard curves were produced to compensate for the efficiency of the PCRs. Quantification of target genes mRNA levels was relative to B-actin mRNA level. The real-time PCR reaction for each gene was performed in a 25μL volume, in a glass capillary containing 0.1μL 100μM each primer and probe, 2μL cDNA, 2.5μL 10xbuffer, 1.5μL MgCl2 (25mM), 0.5μL dNTP (10mmol/L), and Taq DNA polymerase 0.5μL. Thermal cycling conditions included the following steps: initial denaturation at 95 ºC for 3 min, followed by 40 cycles at 95 ºC for 5 sec and 60 ºC for 15 sec (rat Lxra, 62 ºC for 15 sec; rat Apom, 58ºC for 12 sec; rat B-actin, 61ºC for 10 sec). All PCRs were performed on the LightCycler (Roche, Switzerland) real-time PCR system.

Sequences of primers and probes.

Determinations of FFAs. FFAs were determined with the nonesterified fatty acid (NEFA) colorimetric method (Applygen Technologies Inc, Beijing, China). Briefly, total plasma FFAs were extracted with chloroform: N-heptane: methanol (56:42:2), coupled with copper, reacted with color reagent and measured with a colorimeter at 550 nm. The standard curve was produced using a series of dilution of palmitic acid.

Effects of glucose and rosiglitazone on expression of genes of LXR signaling pathway, Abca1 and Pparb/d mRNA expression in rat liver

Effects of glucose and rosiglitazone on insulin sensitivity, hepatic Apom mRNA levels and plasma FFAs. (A) GIR during hyperinsulinemic euglycemic clamp. (B) Hepatic Apom mRNA levels. (C) Effects of glucose and rosiglitazone on plasma FFAs. Data are presented as mean ± SEM. *P <0.05 and ***P<0.001 vs. control. 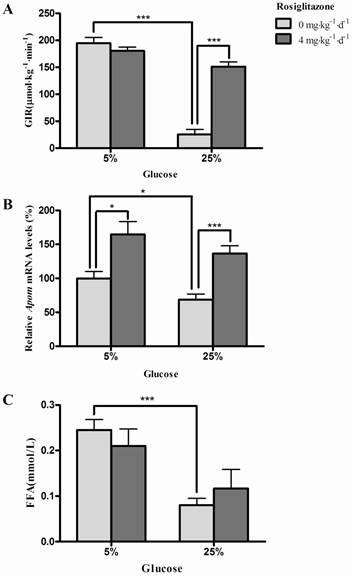 Effects of glucose on genes related to the LXR signaling pathway and mRNA level of Pparb/d in rat liver. Rats were infused with 5% glucose solution (controls, n=6) or 25% glucose solution (n=6) intravenously for 6hrs. Data are presented as means ± SEM. **P <0.01 and ***P<0.001 vs. controls.

Cross interactions between rosiglitazone and infusion of 25% glucose solution on genes of LXR signaling pathway, Abca1 and Pparb/d mRNA expression

In the present study, the rats in the control group were administrated with 5% glucose solution, to avoid the starving on normal physiological metabolic processes.

In agreement with previous reports [22-26], the insulin sensitivity was reduced in rats treated with high concentrations of glucose and this effect could be reversed by rosiglitazone. The present study shows that Apom expression is also significantly affected by either rosiglitazone or hyperglycemia alone without cross interaction with each other, which suggests that the pathway of Apom expression regulated by hyperglycemia might be differed from that by rosiglitazone. Rosiglitazone is well documented, it acts through the PPARγ pathway and alleviates insulin resistance by reducing uptake of free fatty acids as well as enhancing lipometabolism [27]. However, in the present study, plasma FFA levels did not increase as expected, but rather decreased plasma FFAs occurred when rats were infused with 25% glucose solution. It is possible that hyperglycemia can elicit insulin secretion [28] and insulin therefore suppress the fatty acid release through inhibiting lipolysis [29] in this experimental model. We previously reported that activation of neither PPARα nor PPARγ influenced APOM expression in HepG2 cells [30]. While interestingly, our present data demonstrated that activation of PPARγ by the rosiglitazone could up-regulate hepatic Apom expression in rats, which suggests that the signal pathway of PPARγ on regulation of Apom expression might be much more complicated in vivo than in vitro, or perhaps, the difference between rat Apom gene and human APOM gene contributes to the regulation patterns of PPARγ.

ABCA1 is an important member of the ATP-binding cassette-transporter family and is involved in the apoAI-mediated cholesterol efflux from macrophages [31]. PPARγ activator i.e., rosiglitazone and troglitazone, could enhance ABCA1 expression in primary human monocyte-derived macrophages [32], whereas ciglitazone had no effect in cultured human keratinocytes [33]. In this study, hepatic Abca1 mRNA expression was down-regulated by either rosiglitazone or 25% glucose, but rosiglitazone could totally reverse the hyperglycemia-induced down-regulation of Abca1 expression, which demonstrated that down-regulation of Abca1 expression induced by hyperglycemia, might be mediated via the PPARγ pathway in rats.

Cross interaction between rosiglitazone and glucose on target genes of LXR signaling pathway and Pparb/d mRNA expression. Rats (n=6 for each group) were gavaged with 0.25% (w/v) CMC or rosiglitazone (dissolved in 0.25% CMC, at a concentration of 4mg·kg-1·d-1) for 5 days, then infused with 5% glucose solution (controls) or 25% glucose solution intravenously for 6 hrs. Data are presented as means ± SEM. **P <0.01 and ***P <0.001 vs. controls. 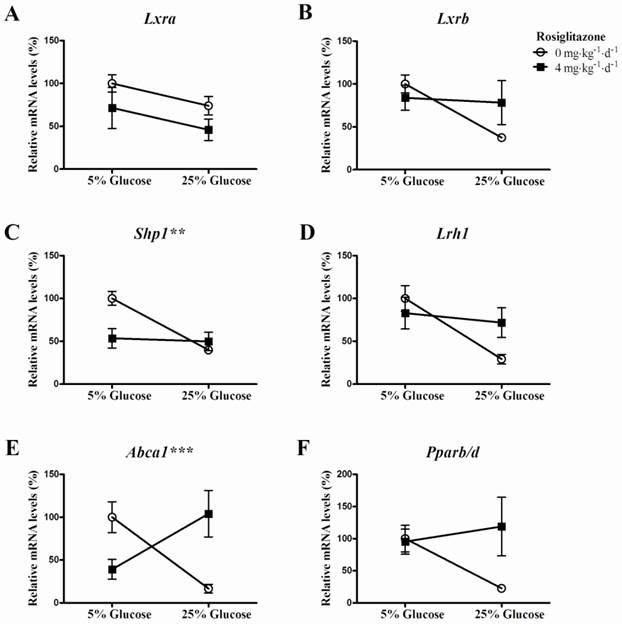 To explore the mechanism of down-regulation of Apom by hyperglycemia, we analyzed mRNA expressions of genes related to the pathway of liver X receptor. Infusion of 25% glucose solution significantly decreased hepatic mRNA levels of Lxrb, Shp1, Lrh1, Abca1 and Pparb/d in rats. We previously reported that palmitic acid-induced upregulation of PPARB/D expression could significantly inhibit APOM expression in HepG2 cells [34]. So by inference, inhibition of Pparb/d mediated by infusion of 25% glucose solution could elevate mRNA levels of Apom. However, the final result showed that infusion of 25% glucose solution significantly decreased Apom expression in rats. One reasonable explanation is that hyperglycemia might suppress Apom expression through multiple signal pathways in vivo. Venteclef, et al., have demonstrated that LRH1 could directly regulate human and mouse Apom transcription by binding to the LRH1 response element located in the proximal APOM promoter region, and bile acids suppressed APOM expression by inhibiting LRH1 transcriptional activity [35]. We have demonstrated that activation of LXR triggers upregulation of ABCA1 and subsequently increases APOM expression [21]. The results of present study showed that downregulation of genes (Lxrb, Shp1, Lrh1) of LXR signaling pathway and its target genes, Abca1 by hyperglycemia could be inhibited by rosiglitazone, although the interactions between rosiglitazone and hyperglycemia on Lxrb (Fig. 4B, P=0.0861) and Lrh1 (Fig. 4D, P=0.0592) did not reach the statistically significant levels. We therefore speculated that hyperglycemia suppresses Apom expression mainly via decreasing expression of Pparg and followed by inhibiting Lxrb in rat.