Methods: Multiplex ligation-dependent probe amplification (MLPA) technology was applied to determine the incidence of DMD/BMD in 84 males with suspicion of the disease and 106 female relatives.

Conclusions: MLPA technology is adequate for the molecular diagnosis of DMD/BMD and establishes whether the mother carries the molecular alteration responsible for the disease, a highly relevant issue for genetic counseling.

Duchénnè and Becker muscular dystrophies (DMD/BMD) are the most frequent genetic diseases among dystrophinopathies, which are caused by alterations of the dystrophin protein, essential in the interaction between cytoskeletal muscle fibers and extracellular matrix; however, although DMD and BMD are caused by mutations in the same gene, they have different ages of onset and distinct severity levels [1-3]. DMD is transmitted in a recessive X-linked fashion; the gene responsible (dystrophin gene [DMD]) is located in the short arm of chromosome X at locus 21 (Xp21), has a size of 2.4 Mb, and is formed by 79 exons. This disease affects males, while females are carriers, although some of them can manifest symptoms that vary from mild muscle weakness to a more severe clinical course [1]. Carrier females are at 50% risk of having an affected male or carrier female offspring.

The reported incidence is 1:3500 live newborn males for DMD and 1:18000 for BMD [1-3]. The disease is characterized by progressive symmetrical muscle weakness, which is earlier and more severe in DMD cases [2].

There are 4,000 known variations of the DMD gene (http://www.dmd.nl), of which the most important involve: the deletion of one or more exons (65% for Duchénnè and 85% for Becker); duplication of one or more exons (5-10% for DMD/BMD); or point mutations, small deletions, or insertions (25-30% for DMD and 5-10% for BMD) [4-7]. The two exon areas with the highest probability of deletions (hotspots) are between exons 44 and 53 and between exons 2 and 20 [4]. In 1935, Haldane reported that DMD/BMD is caused by sporadic mutations in one-third of the patients [8] and that this proportion depends on the patient's sex [9]. It is crucial to determine whether a de novo mutation or a mutation inherited from the mother is responsible for the disease, for which no effective treatment is available, in order to offer appropriate genetic counseling to the family of each affected male.

It has been known since 1987 that most of the mutations that cause DMD/BMD are preferentially found in 18 gene regions [10]; however, studies of these regions using different methods (southern-blot, quantitative PCR, multiplex amplifiable probe hybridization [MAPH], or fluorescent in situ hybridization [FISH]) proved able to detect alterations in only 20-30% of the 79 exons of the DMD gene [11-13]. The recently developed multiplex ligation-dependent probe amplification (MLPA) assay is a more useful technique for the study of index cases and possible carriers [14, 15], because it allows the detection of deletions and duplications of all exons of the gene [2, 13, 16-18]. However, it is important to confirm single exon deletions because of the possibility of small mutations (single nucleotide polymorphisms [SNPs], point mutations) preventing MLPA probe amplification [19].

The study objectives were to determine the incidence of DMD/BMD in Andalusia (Spain) and to establish the percentage of affected males in whom a de novo gene mutation was responsible, using the MLPA technique for molecular diagnosis of the disease in families with an affected male. In the present study population, de novo mutations were responsible for the disease in 16.7% of affected males. This is important information for providing correct genetic counseling.

The study included all consecutive males referred to the Genetic Diagnosis Unit of the San Cecilio University Hospital (Granada) by hospitals in the Andalusia region between February 2005 and May 2013 for suspicion of DMD/BMD (ranging from isolated increases in creatine kinase [CK] and transaminases to a full set of DMD/BMD symptoms), along with one or more female relatives (up to 3rd degree relationship). The study was performed in accordance with the ethical principles of the Helsinki Declaration, and all participants or their guardians signed their informed consent for the genetic studies.

DMD gene mutations were studied in the extracted DNA samples by MLPA assay in accordance with the manufacturer's instructions (MRC Holland, Amsterdam, Holland). Briefly, DNA was denaturalized and hybridized for at least 12 h at 60 ºC with two probes: a probe containing oligonucleotides to analyze exons 1-10, 21-30, 41-50, and 61-70 (MIX 4); and a probe for exons 11-20, 31-40, 51-60, and 71-79 (MIX 5). Samples were treated with ligase for 15 min at 54 ºC, and the reaction was then stopped by incubation at 98 ºC for 5 min. Finally, the amplified product was mixed with a specific SALSA® product (oligonucleotide mixture) and underwent capillary electrophoresis in an ABI PRISM 310 genetic analyzer (Applied Biosystems, Foster City, CA). Results were compared to those obtained for three control samples in the same run. Gene Mapper software version 4.0 (Applied Biosystems, Foster City, CA) was used for the data analyses.

The study included 190 participants, 84 males aged between 1 and 52 yrs (the 52-yr-old had BMD) and 106 females aged between 1 and 72 yrs. A total of 296 X chromosomes were analyzed. Out of the 84 males, DMD gene mutations were detected by MLPA assay in 38 (45.2%) but not in 46 (54.8%). Among the 46 males with no deletions or duplications: 5 were relatives of the index case with no myopathy symptoms; 15 had clinical (positive Gowers' sign, gait disorder), electromyographic, pathological, and/or biochemical data compatible with DMD/BMD, implying the possible presence of some type of mutation undetectable by MLPA, e.g., small deletions, insertions, or point mutations; 3 patients were finally diagnosed by molecular analysis with Steinert disease (CTG triplet determination by PCR amplification) and 1 with Landouzy Dejerine myopathy (Southern-blot of FSHD gene); and there were insufficient or missing clinical data in the remaining 22 patients (Table 1). Among the 38 males with MLPA-detected DMD gene mutation, 34 (89.5%) were diagnosed with exon deletions and 4 (10.5%) with exon duplications. Out of the 34 males with exon deletions, 4 showed single exon deletions. The diagnosis of these patients was confirmed by using a single PCR (data not shown), given the possibility of a false positive result due to changes in the sample DNA sequence detected by the probe (SNPs, point mutations).

Out of the 106 female relatives (to 3rd degree) studied, only 39 (36.8%) were mutation carriers; 35 of these (89.7%) carried exon deletions and 4 (10.3%) exon duplications. Table 2 displays the results of the 24 studies of mother-son pairs. The mutation detected in the son was absent in the mother in four of these pairs (16.7%), indicating the presence of a de novo mutation. The study of the mother was not possible in 14 of the 38 males diagnosed with gene deletion or duplication because the mother was dead (n=4) or not resident in Spain (n=2) or because the maternal sample was not delivered by the referring hospital.

Figure 1 depicts the electropherograms and RPA graphs for a 7-yr-old male with DMD/BMD-compatible symptoms and family history and for his carrier mother.

Figure 2 depicts the electropherograms and RPA graphs for a 3-yr-old male with DMD/BMD-compatible symptoms but no family history and for his non-carrier mother.

Data on the 24 son-mother pairs studied. 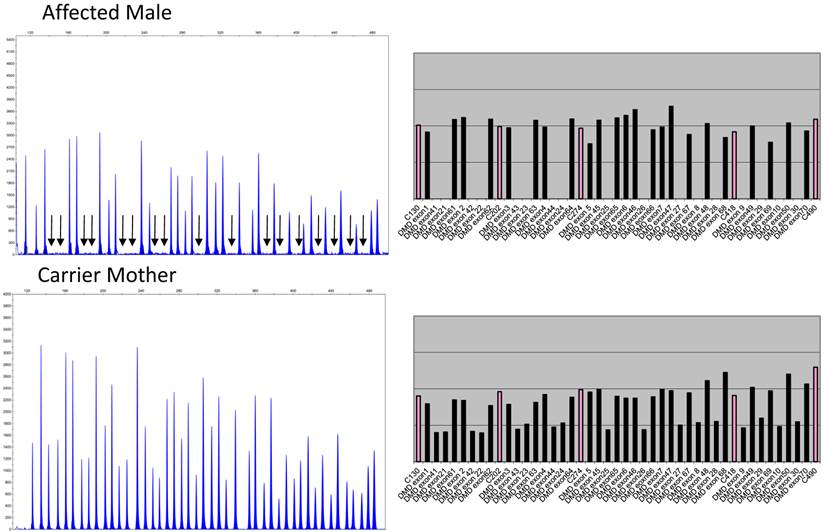 Electropherograms of male DMD patient with deletion of exons 8 to 10 and his non-deletion-carrying mother. The figure only shows the electropherogram for the run in which exons 1-10, 21-30, 41-50, and 61-70 are analyzed. Each peak represents an exon of the dystrophin gene. Arrows indicate the absence of signals corresponding to deleted exons 8, 9, and 10. The ratio peak area (RPA) graphs alongside the electropherograms show an RPA for deleted exons of 0 for the son and 1 for the mother. 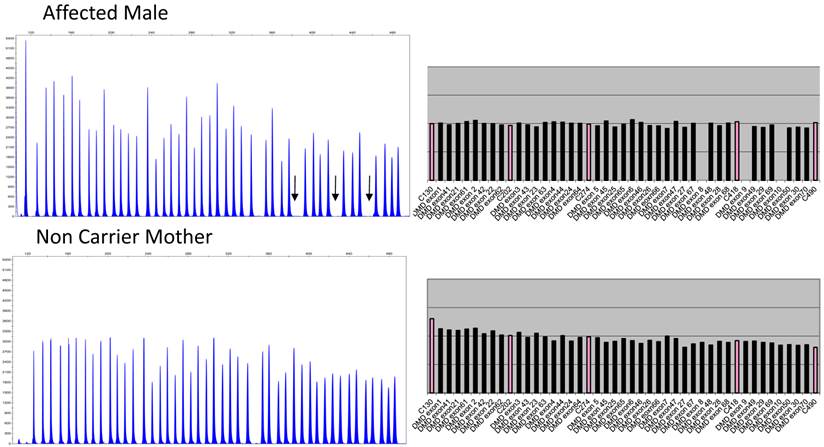 It has been known since 1987 that DMD/BMD is caused by mutations of the DMD gene, the largest known human gene (2.4 Mb and 79 exons) [20, 21]. The recently developed MLPA assay [14, 15] allows deletions and duplications to be detected in any of the 79 exons of this gene. We used this method to carry out a genetic study of DMD/BMD disease in 84 males. DMD gene mutations were detected in 38 of them and a further 15 were diagnosed with DMD/BMD based on clinical, electromyographic, and muscle biopsy data.

If we assume that the 15 males with DMD/BMD-compatible symptoms have mutations not detected by MLPA, it can be stated that the mutations in the 53 males with DMD/BMD were deletions (64.1%) or duplications (7.5%) or undetected small deletions, insertions, or point mutations (28.3%). These data are in agreement with previously published findings [5-7].

In 1935, Haldane claimed that a third of DMD/BMD cases involved spontaneous dystrophin gene mutations [8]. Findings since that date have been controversial, with a similar frequency being reported by some authors [21] but a higher [22] or lower frequency (around 20%) [23] by others. A sporadic mutation was detected in 16.7% of the present series of DMD/BMD patients. However, given the small sample size of 24 son-mother pairs, further investigation is warranted in a larger number of cases. Three out the four de novo mutations in the present study were deletions, one in the distal region and two in the proximal region, and there was only one duplication, consistent with suggestions that deletions are more frequent in de novo mutations than in other mutations [24].

There have been reports of both somatic [25] and germinal [26, 27] mosaicism in patients with dystrophinopathies. Knowledge of the carrier or non-carrier status of a woman is vital for genetic counseling because of the risk of recurrence from germinal mosaicism, recently estimated as 4.3% [28]. The lack of an effective treatment for this disease makes its prevention of paramount importance. In this context, prenatal diagnosis has offered women in DMD families the possibility of preventing the birth; however, as Helderman-van den Enden et al. recently pointed out in a study in the Netherlands, families with de novo mutations in the DMD gene cannot make use of prenatal diagnosis [29]. For this reason, it is essential not only to determine mutations in index cases but also to identify female carriers.

Furthermore, although most female carriers do not have symptoms of muscular disease, it is now known that a significant percentage suffer from muscle weakness and even dilated cardiomyopathy [30], and a five-yearly cardiac examination has been recommended by some authors [31]. There appears to be a wide consensus in favor of following up female carriers of DMD/BMD disease in order to rule out cardiac disease.

Although our results shed light on the proportion of de novo mutations in an Andalusian population, it is limited by the failure to include 14 of the 38 mother-son pairs traced and by some incomplete or missing clinical data for the others. However, given the very low incidence of this disease (1:3500 live newborn males for DMD and 1:18000 for BMD), the sample size achieved can be considered a study strength.

In conclusion, the MLPA assay is a sensitive, fast, and effective tool for diagnosing deletions and duplications of the dystrophin gene in affected males and carrier mothers. The assay offers a completely reliable diagnosis of the carrier or non-carrier status of the mother of a son with this disease, allowing appropriate genetic counseling to be offered with no need for muscle biopsy in most individuals with DMD/BMD.

The authors are grateful to all the males and their relatives that have participated in the present study and thank Richard Davies for assistance with English version. CGLL has a postdoctoral fellowship from the Plan Propio of the University of Granada.

The authors declare no competing interest.