There are well known that Wnt signaling was some roles of cell differentiation at the development tissues, especially the oral and maxillofacial regions of some developmental stages. Therefore, to determine Wnt signaling in the pleomorphic adenoma tissues, we examined. The expression of Wnt1 and β-catenin as well as the distribution of various cytoskeletal proteins CK7 and CK13 was examined in 30 cases of pleomorphic adenoma by immunohistochemistry. Wnt1 was detected in almost all tumor cells. The peripheral columnar cells in squamous metaplasia and small cuboidal cells in duct-like structures were strongly positive to Wnt1. Although β-catenin was clearly localized on the cell membrane of tumor cells, nuclear translocation was observed in small cuboidal cells and in some basaloid cells. The immunofluorescent staining pattern of Wnt1 and CK7 as well as Wnt1 and CK13 was consistent with IHC results. Thus, in pleomorphic adenoma, Wnt is involved in tumor cell differentiation of peripheral columnar cells forming solid nests and small peripheral columnar cells forming duct-like structures. Moreover, among the three currently known Wnt pathways, β-catenin is the suggested pathway working during cell differentiation. Furthermore, peripheral columnar cells in solid tumor nests and in squamous metaplasia are governed by another Wnt pathway other than β-catenin. Therefore, Wnt signaling through β-catenin pathway may be involved in the 'mixed' differentiation characteristic of pleomorphic adenoma although another pathway may also be possibly working in other parts of the tumor tissue.

Pleomorphic adenoma is the most frequently occurring benign epithelial tumor of the salivary gland (1). The neoplasm is histopathologically characterized by being diverse, consisting of polygonal epithelial cells forming ductal structures surrounded by myoepithelial cells. Typically, a transition from epithelial to mesenchymal component creates a third type of tumor stroma called cartilaginous or myxomatous tissue during the growth of the glandular structure. The myoepithelial cells are highly considered as neoplastic in origin. It is a general opinion that neoplastic myoepithelial cells are responsible for the formation of cartilaginous and myxomatous tissues (2, 3). However, the small cuboidal cells in tumor nests undergoing advanced differentiation, squamous epithelioid cells, plasmacytoid cells and other cells involved in mesenchymal transition have not been elucidated in previous researches. Consequently, the study focused on the differentiation of parenchymal tumor cells in pleomorphic adenoma.

A total of 30 cases of pleomorphic adenoma from the archives of the Department of Oral Pathology, School of Dentistry, Aichi Gakuin University, were reassessed histopathologically based on WHO classification. The mean age is 51.5 years consisting of 13 male and 17 female. Fourteen were located in the palate, 5 were located in the parotid gland and 4 were located in the mandibular gland, and remaining 7 were in the other portions (Table 1). Samples were prepared for histopathological examination in a routine manner as follows. Specimens were fixed in neutral buffered formalin solution, dehydrated in series of alcohol, embedded in paraffin, serially sectioned into 4-μm thickness and stained with hematoxylin and eosin (HE).

The study was reviewed and approved by the Ethics Committee of Aichi Gakuin University (Number 284, approved on December 5, 2011) as part of the 'Basic Clinicopathological Study and Method of Diagnosis Aimed to Understand the Pathogenesis and Development of Salivary Gland Tumor'.

Microscopically, the tumor tissue consists of various copmponents. Within the tumor nests, duct-like structures are apparent. A double layer of basaloid cells and relatively large cuboidal cells formed the duct-like structures (Fig. 1-a). The neoplastic myoepithelial cells are scattered in the surrounding stroma creating the 'mixed' appearance of the tumor, which is a characteristic of pleomorphic adenoma (Fig. 1-b). Other parts of the stroma consist of so-called myxomatous tissue. Others consist of colorful substrates and glass-like substance creating an encapsulated cartilaginous stroma (Fig. 1-c). In the tumor cell nests, squamous-like tumor cells were formed (Fig. 1-d).

Many of the squamous epithelioid cells in tumor nests exhibit positive reaction on the cell membrane. In the stroma showing squamous metaplasia, the basaloid cells strongly expressed Wnt1 although the same intensity was not observed in the keratinocytes (Fig. 2-b). In addition, positive reaction on the cell membrane of plasmacytoid cells in the tumor nests was detected.

With regard to β-catenin, the small cuboidal cells in the outermost layer of the duct-like structures in tumor nests showed strong positive reaction both in the cytoplasm and nucleus. The cytoplasm and nucleus of small cuboidal cells distributed in the outer part of the duct-like structures exhibited positive reaction (Fig. 2-c). Furthermore, the nuclei of the spindle-shaped cells in the mesenchymal component are positive but comparing to the tumor cells in duct-like structures, the nuclei were weakly positive. The neoplastic chondrocytes in glass-like stroma were almost negative. However, at the myxomatous stroma, few spindle cells showed positive cytoplasmic reaction.

With regard to Wnt1 and β-catenin, Wnt showed strong positive reaction mainly in small cuboidal cells in the tumor nests with advanced growth. β-catenin was also positive in almost the same region. In addition, nuclear translocation of β-catenin was confirmed in cuboidal cells forming duct-like structures in particular. However, the positive reaction became weak in areas with squamous metaplasia. Localization in the nucleus of basaloid cells located at the margin of tumor nests was also evident. However, nuclear translocation was not observed in squamous epithelioid cells.

In the double staining of Wnt1 and CK7, Wnt showed strong positive reaction in the area with small cuboidal cells within the solid tumor nests. On the other hand, in the region with polygonal and spindle cells constituting the myxomatous part, a positive reaction was observed in some cells but compared to the site with solid tumor nests, Wnt1 reaction was stronger in the cytoplasm and nucleus of spindle-shaped cells (Fig. 3-a). In the cells that form duct-like structures, Wnt1 and CK7 were observed simultaneously (Fig. 3-b). The overlapping of the stains is clear (Fig. 3-c, d).

In the double staining of Wnt1 and CK13, Wnt was localized in the cytoplasm in a wide variety of cells forming tumor nests. Wnt showed strong positive reaction in tumor nests with advanced growth. A strong positive reaction was also observed in polygonal cells and in small cuboidal cells that formed aggregated solid nests. Moreover, cells that form duct-like structures in solid nests were also strongly positive (Fig. 4-a). However, CK13 was positive mainly in the cytoplasm of squamous epithelioid cells found in squamous metaplasia (Fig. 4-b). The overlapping of staining is clear (Fig. 4-c, d). 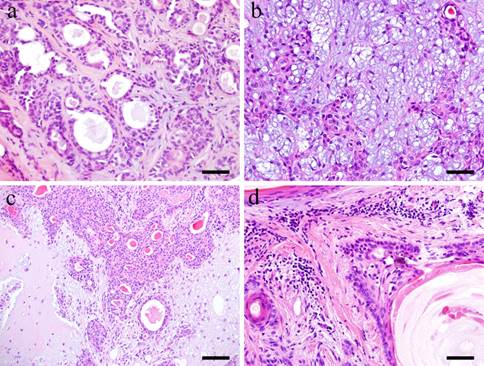 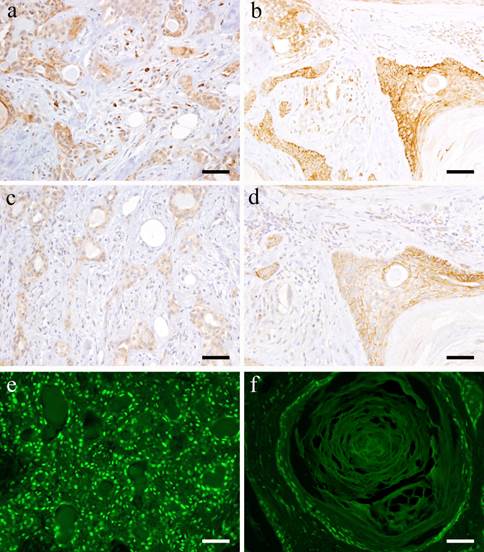 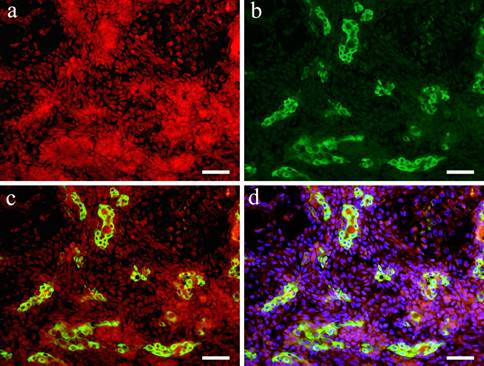 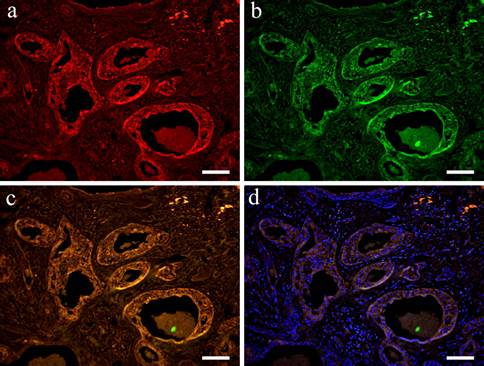 At first, there are no positive controls for this examination. The examination materials all are from clinically exited human surgical materials. Therefore, there are impossible to prepare the positive controls. According to the results, there were determined the specific localization of all examined results: Wnt1, β-catenin, CK7 and CK1. These results have thought to means true of this distribution pattern. Various researches regarding tumor development, cell differentiation and progression have been carried out producing clinical impact. In recent years, studies regarding the expressions of various factors in tumor tissues responsible for cell differentiation have been pursued and many have been reported (5-9). In the oral cavity, studies in odontogenic tumors including ameloblastoma in particular have been carried out (10-12). Recently, Wnt signaling has been involved in calcifying cystic odontogenic tumor, odontoma, calcifying epithelioma and in ameloblastoma type craniopharyngoma. Consequently, the ghost cells showed strong positive reaction to antibodies against hair proteins. Moreover, Wnt signaling is believed to be responsible for the increase β-catenin expression in the cytoplasm and nucleus of epithelial cells in close proximity as well as the nuclear localization of Lef-1 (13).

Wnt is responsible for cell proliferation, differentiation and homeostasis although researches have also shown that Wnt is associated with suppression of cell proliferation and tissue differentiation (14). Wnt is an extracellular secretory protein that is variously expressed and widely conserved. Although regulation of gene expression, cell proliferation, cell motility, cell polarity and maintenance of homeostasis in regenerating organs are its inherent actions, when the signal is abnormal, the liquid-crystal molecules play important roles in pathological aspects such as malignant transformation and invasion in cancer as well as various physiological transitions (15). Under physiological conditions typical in β-catenin pathway, the protein accumulates in the cytoplasm and is translocated into the nucleus due to Wnt signaling. The protein later on combines with Tcf/Lef transcription factors and promotes the expression of genes such as Cyclin D1 and c-Myc (16, 17). β-catenin expression is held low if there is no stimulation of Wnt. Considering its relation to the differentiation of tumor cells, the advent of hard keratin expression in ghost cells in tumors has been reported in Wnt signaling pathway (18, 19).

In β-catenin pathway, cytoplasmic β-catenin protein adjusts its weight to suppress gene expression. In the absence of Wnt, β-catenin forms complex with Axin, tumor suppressor gene product APC, casein kinase 1a and glycogen synthase kinase-3b (GSK-3b). In CK1a and GSK-3b complex, β-catenin is degraded in the proteasome after being phosphorylated efficiently and then undergoes ubiquitination, keeping its amount low in the cytoplasm. However, Wnt binds to Frizzled and LRP 5/6 and then signals are transmitted into the cell to suppress phosphorylation of β-catenin. The state of low phosphorylation of β-catenin promotes the formation of complex of transcription factor T-cell/lymphoid enhancer factor and promotes the formation of Cyclin D1 and c-Myc proteins, to suppress the proliferation and differentiation of cells. On the other hand, two pathways have at least been identified in non-β-catenin pathway namely PCP and Ca2+ pathways (20). Suppression of β-catenin pathway is known in these pathways.

Moreover, analysis of the cytokeratin focused on the biphasic cell differentiation of myoepithelial cell in pleomorphic adenoma has been conducted hence CK7 and CK13 were selected this time (31, 32). In the present study, the small cuboidal cells in solid tumor cell nests showed strong positive reaction to Wnt as well as to β-catenin with nuclear reaction recognized in the latter protein. This suggests that Wnt is working through the β-catenin pathway. In the study of neural stem cells, Wnt may require the activation of Notch signaling known to suppress cell differentiation. β-catenin binds to Hes1 gene in the promoter region due to the inhibitory effect of the cell (33).

In the area stained with CK13, the squamous epithelioid cells indicating the site of squamous metaplasia showed Wnt positive reaction. Furthermore, Wnt exhibited strong positive reaction in peripheral columnar cells of tumor nests in particular. However, positive reaction in cells with advanced differentiation was weak. Similarly, β-catenin showed positive reaction in squamous metaplasia. The deep staining around cell membrane was recognized in many cells but no cytoplasmic and nuclear translocation was detected. This trend was observed in basaloid cells especially around the tumor nest only in a small portion but there was also a site of nuclear translocation. It is suggested that Wnt is working through β-catenin pathway in squamous epithelioid cells that form tumor nests and partly in basaloid cells in surrounding nests (35). Although Wnt is expressed in many cells, nuclear translocation of β-catenin did not occur suggesting that a different pathway for Wnt signaling might have occurred. Moreover, in myxomatous and cartilaginous cells, Wnt and β-catenin expressions were weak and the expression is considered for the performance of Wnt function. The important findings are the almost overlapping of the IHC staining results and IF results. We considered that there are no meaning of the positive ratio of IHC and IF.

18. Kikuchi A, Yamamoto H. Tumor formation due to abnormalities in the β-catenin-independent pathway of Wnt signaling. Cancer Sci. 2008;99:202-8