Up to date, cervical cancer remains to be one of the leading gynecological malignancies worldwide. There were estimated more than 529000 new cases with cervical cancer annually in the world, and about 80% occurred in the developing countries [1, 2]. In 2005, there were more than 58000 new cases and 20000 deaths caused by cervical cancer in the mainland of China [3, 4]. Given that there was not a nationwide screening project yet, the incidence rate of cervical cancer might be even higher in some rural areas with poor socioeconomic status [5].

As broadly accepted, surgery and radiotherapy are still the mainly treatment for cervical cancer, and sometimes chemotherapy is performed on patients with recurrence or metastasis [6, 7]. The current standard radiotherapy was the combination of external beam radiotherapy and intracavitary brachytherapy, which had the same efficiency on suppressing tumor growth and inhibiting metastasis as surgery [8]. Unfortunately, several cervical cancer patients would present either intrinsic or acquired radioresistance and finally obtained poor outcomes [9]. Thus, further exploring the mechanisms underlying radioresistance is urgently required.

This study was permitted by the Ethical Committee of our hospital and written consents were obtained from all the participants. A total of 35 fresh cervical cancer and 20 non-cancerous cervix tissues were collected from July 2010 to December 2012 in the Affiliated Hospital of Jiangnan University (Wuxi, China). The tissues were separated into two parts: one part was immediately stored in RNAlater (Qiagen, CA, USA) at -80˚C for miR-218 detection.

Another part was for the primary culture. Briefly, the cervical cancer tissues were rinsed twice with pre-chilled Hank's Buffered Salt Solution (HBSS, Gibco, CA, USA), and then gently minced by scalpels in the DMEM/F12 medium (Gibco) supplemented with 10% FBS (fetal bovine serum, Gibco). This mixture was then digested in the fresh medium containing 0.1% collagenase IA and 100 U/ml penicillin/streptomycin (Sigma, MN, USA) at 37 °C for 2 hours. Then cells were washed three times and resuspended in the 1×PBS buffer (Gibco). 1×104 cells/well was seeded into the 96 well plates. After incubated at 37 °C for 24 fours, the cells were fixed onto the Faxitron Cabinet X-ray System for irridiation with the indicated doses. The patients' information was supplied in Table 1.

A Faxitron Cabinet X-ray System (Faxitron, IL, USA) was used as the X-ray source ( the dose rate = 0.36 Gy/min). The X-rays were filtered through a 0.5-mm aluminum filter and all the cells were treated at room temperature. Mice bearing tumor were radiated 30 minutes for totally four times (on day 0,7, 14 and 21, 10.8 Gy/each time), the lead shields were used to avoid radiation injury.

MicroRNAs were enriched using the mirVana miRNA Isolation kit (Applied Biosystems, CA, USA) according to the manufacturer's instructions. MiR-218 expression was measured using the Taqman miRNA assay kit (Applied Biosystems). U6 RNA was set as the endogenous control. The relative expression of miR-218 was calculated with the 2-ΔΔCt method. All the procedures were repeated in triplicate.

Equal amounts of total protein (usually 20-50 µg) were separated by 12% SDS-PAGE, then transferred onto the PVDF membrane, blocked in 5% non-fat milk for 1 hour, and incubated with the primary antibodies overnight at 4 °C. Then the membranes were incubated with an appropriate secondary antibody for 1 hour at room temperature. The bands were developed using ECL Kit (Cell Signaling Technology, Danvers, MA, USA) and quantified on a Kodak imaging system. The primary antibodies binding cleaved caspase 3, cleaved PARP, Rictor and GAPDH were purchased from Cell Signaling Technology.

Briefly, 0.3×103 cells/well were seeded into the 6-well plates and routinely cultured overnight. Then the cells were radiated with indicated doses (0, 2, 4 and 8 Gy; only 4 Gy was given to the primary cultured cells) and further cultured for another 12 days (7 more days for the primary cultured cells). The colonies were fixed with chilled methanol and stained with crystal violet. Colonies (> 50 cells) were counted on an inverted microscope. The surviving fraction was calculated as follows: number of colonies/number of plated cells. All the procedures were repeated in triplicate.

2×106 cells were plated into the 60 mm dishes and pretransfected with miR-218 mimics or negative control for 36 hours; then the cells were radiated with the dose of 2 Gy. Twenty-four hours later, the cellular apoptosis was detected using the Annexin Ⅴ-FITC Apoptosis Kit (BD Biosciences, CA, and USA). In brief, 1×105 cells were suspended in 100 µl binding buffer, then 5 µl PI and 10 µl Annexin Ⅴ-FITC were added into the solution. After incubated in dark for 15 min, another 400 µl binding buffer was added into and the apoptotic statuses were detected on FACScalibur (BD Biosciences). The results were analyzed using the CellQuest software. All these procedures were repeated in triplicate.

Six weeks old female BALB/c nude mice were used for this experiment. All animal handling procedures were performed strictly following the university Institutional Animal Care and Use Committee guidelines. The mice (n=24) were randomly divided into four groups: control, miR-218 overexpression, radiation, combination of miR-218 overexpression and radiation. At first, 100 μl (1×107 cells/ml) HeLa cells with or without miR-218 overexpression were injected subcutaneously in the right posterior flank of the mice. When the tumor volume reached 100 mm3 [tumor volume = (length×width2)/2], a totally dose of 43.2 Gy (10.8 Gy/ each week) X-ray radiation were given to the mice in the latter two groups. Then the tumor was checked once a week using a caliper. On day 28, all the mice were sacrificed and tumors were collected for further experiments.

The tumor tissues from mice were formalin-fixed and paraffin-embedded for the IHC analysis. In brief, after rehydration and antigen retrieval, the slides were incubated with primary antibodies: anti-Ki 67 (1:200, Boster Biotech Company, Wuhan, China), anti-cleaved caspase 3 (1:200, Cell Signaling Technology). The staining was visualized using DAB (Invitrogen, CA, and USA). The proliferation and apoptosis were investigated at 400× magnification. The Image J software was used to quantitate the percentage of Ki-67 positive cells. The staining of cleaved-caspased 3 was scored following this criterion: 0, (<10% positive); 1, (11-25% positive); 2, (26-50% positive); 3, (>50% positive).

SPSS 16.0 (SPSS Inc., USA) was used for all the statistical analysis in this study. χ2 test and t-test were appropriately applied for different types of data. P < 0.05 was considered to be statistically significant.

By transient transfection, we successfully elevated the level of miR-218 more than 1000 folds (Figure 1C). Simutaneously, we also detected a notably decline of the Rictor protein level (a direct target of miR-218, Figure 1D). According to our results, overexpression of miR-218 markedly increased cellular sensitivity to the X-ray radiation especially in the 4 Gy group (P<0.001 for HeLa, Figure 1E; P=0.009 for SiHa, Figure 1F; P=0.016 for C33A, Figure 1G; and P=0.01 for CaSki, Figure 1H).

As shown in Figure 2A, both miR-218 overexpression and 2 Gy radiations induced significantly apoptosis in HeLa cells, and this effect was further enhanced by the combination of miR-218 overexpression and radiation. The alterations of cleaved caspase 3 and cleaved PARP also indicated a notably increase of apoptosis in HeLa cells (Figure 2B). Similar results were also detected in the other three cell lines (Figure 2C).

We established the HeLa cell line with stable overexpression of miR-218 (Figure 3A), and detected the same effects of miR-218 on cellular sensitivity to radiation (Figure 3B, P<0.001). In the xenograft growth assay, both miR-218 overexpression and radiation suppressed tumor growth significantly (P<0.01 and P<0.01, respectively); and combination of these two approaches enhanced the inhibition on tumor growth (Figure 3C, P<0.001). According to the IHC results, the combined therapy notably blocked the expression of Ki-67 and upregulated the expression of cleaved caspase 3 (Figure 3D). 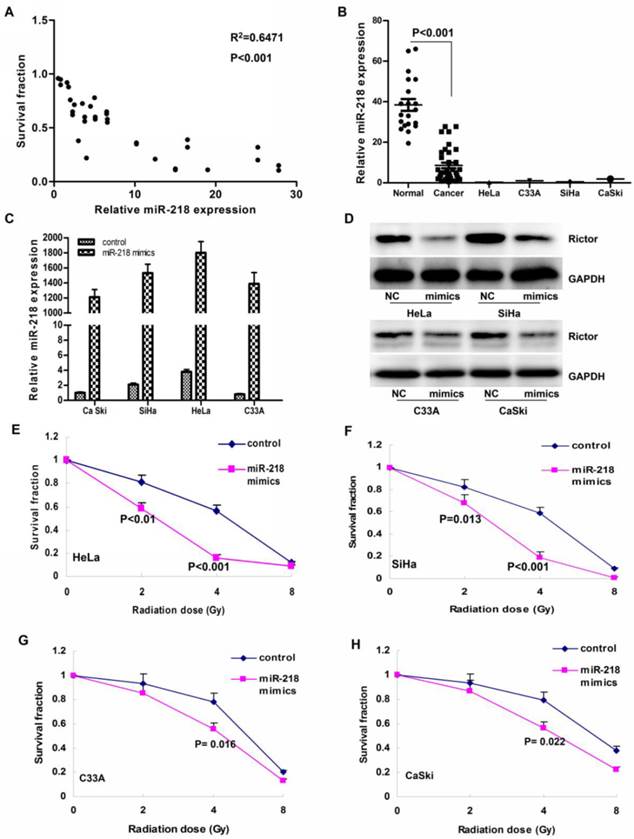 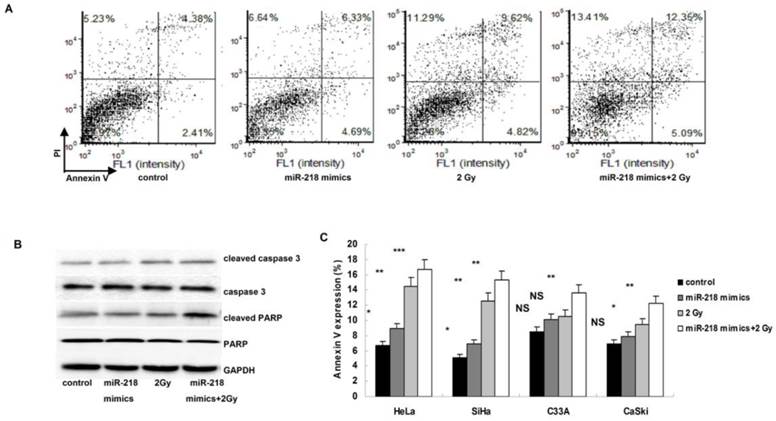 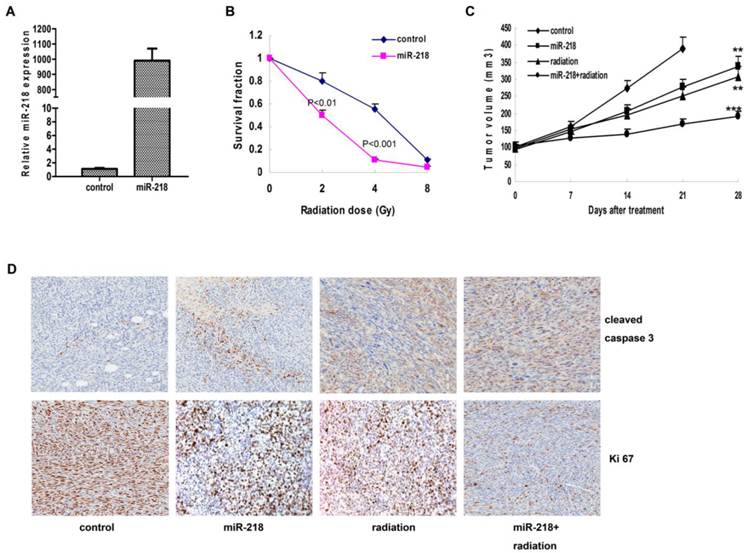 Generally, the squamous subtype accounted for more than 80% of all cervical cancer cases and was quite sensitive to radiation, while the adneocarcinoma and some other rare subtypes were not [9, 11]. Unfortunately, several patients (especially those with local or distant metastasis) presented resistance to radiotherapy and usually obtained an unsatisfied outcome [7]. Therefore, how to eliminate radiation resistance was crucial for cervical cancer treatment, and one potent strategy was to develop new drugs to improve the radiosensitivity of tumor cells.

In the past decade, a large body of researches has demonstrated that microRNAs were involved in the regulation of cellular radiosensitivity. In lung cancer cells, upregulating the let-7 family increased cellular radiosensitivity via control of RAS and DNA damage repair genes [12]. In another study, miR-521 resensitized prostate cancer cells to radiation through modulating the CSA protein [13]. On the contrary, some microRNAs were also proved to be oncomiRs, which can induce radioresistance and promote cellular proliferation, migration and invasion. In gastric cancer cells, miR-221/222 could directly decrease the expression of PTEN and induce cellular resistance to radiation [14].

In vitro and in vivo, miR-218 overexpression significantly induced radiation associated apoptosis, accompanied with the accumulation of cleaved caspase 3 and cleaved PARP. Similar to our results, miR-218 was also proved to induce apoptosis via targeting NF-κB and BMI 1 signaling pathways in glioma and colon cancer [16, 17].

For the time being, several microRNAs are under evaluation in clinical trials as a novel type of drugs. SPC3649 (a miR-122 antagonist, NCT01872936), is used to treat chronic infection of Hepatitis C in a phase II clinical trial [18]. And another phase I trial is evaluating the functions of MRX34 (miR-34 mimics, NCT01829971) in patients with primary liver cancer and other solid tumors [19].

In summary, we demonstrated that miR-218 resensitized cervical cancer to radiotherapy via enhancing apoptosis. In addition, miR-218 could predict the radiosensitivity of cervical cancer patients. Based on these findings, we propose combining miR-218 supplement and radiotherapy to be a novel treatment for cervical cancer, especially in the patients with loss of miR-218.

Our project was supported by grants to Yu Jinjin from Wuxi Science and Technology Bureau (No. CSE01N1113) and to Wang Yuan from the Affiliated Hospital of Jiangnan University (No. SY201305).