Metabolic disorders with obesity have become a major medical problem associated with the development of hypertension, type 2 diabetes (T2DM) and dyslipidemia, and ultimately life-threatening cardiovascular and renal diseases. Particularly, adipose tissue has been recently considered as a distinct endocrine organ, which is able to produce adipokines, such as adiponectin and leptin [1]. In addition, dysfunction of adipose tissue is suggested to play a critical role in the development of metabolic disorders through the production of inflammatory cytokines and exaggeration of oxidative stress in the adipose tissue [2].

The renin-angiotensin system (RAS) has been implicated in the pathogenesis of hypertension and cardiovascular disease based on the generation of angiotensin II (Ang II), a key regulator of cardiovascular homeostasis. Recent evidence has suggested a possible role of RAS in the regulation of adipose tissue function, thereby providing a new perspective concerning the pathophysiology of metabolic disorders and their complications induced by pathological function of tissue RAS [3]. The pathophysiological actions of Ang II are mediated by the Ang II type 1 receptor (AT1R). In the present study, we examined the therapeutic effects of irbesartan, an AT1R-specific blocker, in genetically obese diabetic KKAy mice, a model of human metabolic disorders with T2DM without any dietary loading [4], and focused our analysis on its effect on the adipose tissue.

Male KKAy mice were purchased from CLEA Japan, Inc. (Tokyo, Japan), and were housed in a controlled environment with a 12-h light-dark cycle and were allowed free access to food and water. Mice were fed a standard diet (3.6 kcal/g; 13.3% energy as fat; Oriental MF, Oriental Yeast, Co., Ltd.). At 9 weeks of age, mice were divided into two groups (N=6-8 mice per group) for the oral administration of vehicle or irbesartan in drinking water for 4 weeks, and body weight and food intake were measured. The irbesartan dosage (50 mg/kg/day) was determined from previous reports using mice [5-7].

Mice were sacrificed under anesthesia and the tissues were collected at the end of the experimental period. The protocol was reviewed and approved by the Animal Studies Committee of Yokohama City University, and all experiments were performed in accordance with the National Institutes of Health guidelines for the use of experimental animals.

Systolic blood pressure was measured noninvasively by the tail-cuff method (BP-monitor MK-2000; Muromachi Kikai Co.). The MK-2000 BP-monitor made it possible to measure blood pressure without preheating the animals, thus avoiding this very stressful condition [8-10]. At least eight readings were taken for each measurement.

Total RNA was extracted from epididymal adipose tissue with ISOGEN (Nippon Gene), and cDNA was synthesized using the SuperScript III First-Strand System (Invitrogen). Real-time quantitative RT-PCR was performed with an ABI PRISM 7000 Sequence Detection System by incubating the reverse transcription product with TaqMan PCR Master Mix and a designed Taqman probe (Applied Biosystems), essentially as described previously [10-14]. The mRNA levels were normalized to those of the 18S rRNA control.

All data are shown as means±SEM. Differences were analyzed by Student's unpaired t test. A P-value of <0.05 was considered statistically significant.

Baseline characteristics of KKAy in the vehicle-treatment and irbesartan-treatment groups.

Effects of irbesartan on blood pressure, body weight and tissue weight of fat and liver in KKAy mice after 4-week treatment. 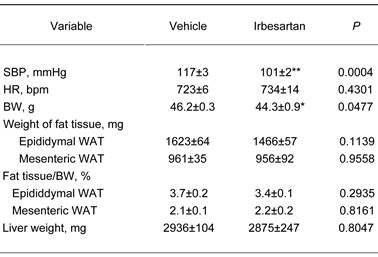 On the other hand, heart rate, the wet tissue weight of fat and liver did not significantly differ between the vehicle-treatment and irbesartan-treatment groups. In addition, there was no difference between the two groups in daily food intake (Figure 1). We also examined possible effects of irbesartan on glucose and lipid metabolism in KKAy mice. As shown in Table 3, the irbesartan treatment did not modify the parameters of glucose and lipid metabolism in KKAy mice.

Effects of irbesartan on daily food intake in KKAy mice. The values are mean±SEM (n=8). 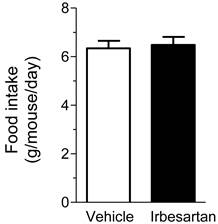 Effects of irbesartan on glucose and lipid metabolism in KKAy mice after 4-week treatment. 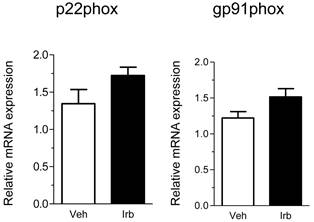 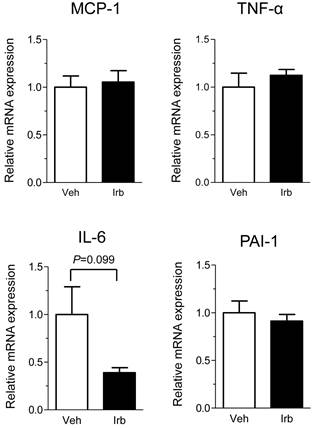 Effects of irbesartan on the adipose tissue mRNA expression of adipokines (adiponectin and leptin) in KKAy mice. The values are mean±SEM (n=6-8). Veh, vehicle; Irb, irbesartan. *P<0.05 vs vehicle. 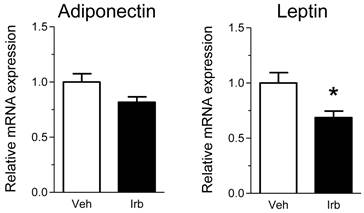 In the present study, we showed that the treatment with irbesartan for 4 weeks significantly decreased blood pressure in KKAy mice. In addition, the irbesartan treatment provoked a significant reduction in BW without suppression of dietary food intake. Thus, the hypotensive effect of irbesartan with a concomitant anti-obesity effect may be mediated via pleiotropic effects of irbesartan on the adipose tissue function in addition to its blood pressure lowering effect. From this point of view, there are three interesting findings possibly related to pleiotropic effects of irbesartan on adipose tissue in KKAy mice; 1) an inhibitory effect on IL-6 gene expression, 2) a suppressive effect on leptin gene expression and 3) a tendency of improvement in tissue expression balance between ATRAP and AT1R.

Effects of irbesartan on the adipose tissue mRNA expression of angiotensinogen, AT1R and ATRAP in KKAy mice. The values are mean±SEM (n=6-8). Veh, vehicle; Irb, irbesartan. 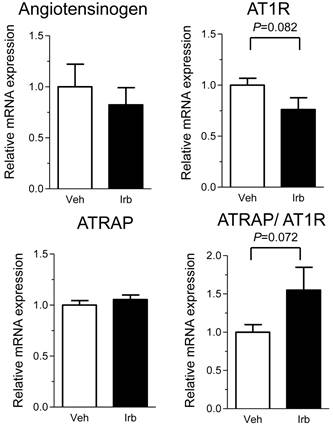 Although irbesartan reportedly has a stimulatory effect on adiponectin production in cultured adipocytes and in the adipose tissues of obese Zucker rats and apolipoprotein E-deficient mice [7, 22, 23], irbesartan treatment did not affect the adiponectin mRNA expression in the adipose tissue of KKAy mice in the present study. This discrepancy regarding the promoting influence of irbesartan on adiponectin would be due to difference in experimental animal models used for analysis. Alternatively, a post-transcriptional modulation may play a role in the irbesartan-mediated effects on adiponectin production in adipose pathophysiology as suggested in previous studies [24, 25].

Leptin is the firstly characterized adipokine, which is 16 kDa peptide hormone encoded by the ob gene and mainly produced by white adipose tissue regulated by energy level, food intake, several hormones and various inflammatory mediators [26, 27]. Leptin provides the functional link between the immune system and energy homoeostasis [28]. Leptin has been shown to up-regulate various mediators of vascular inflammation including IL-6 [29]. With respect to cardiovascular disease, leptin is suggested to have a variety of pro-atherogenic functions [30]. Thus, through its inflammatory and pro-atherogenic properties, leptin plays an important pro-inflammatory role in metabolic disorders in obesity, thereby providing a functional link between obesity and cardiovascular disease.

In the present study, irbesartan exhibited an inhibitory effect on the leptin-IL-6 axis with anti-obesity effect in KKAy mice, a human model of metabolic disorders. However, It should be determined why the irbesartan treatment exerted a tendency of suppression only on IL-6 mRNA expression among inflammatory cytokines in the adipose tissue of KKAy mice. Although the IL-6-specific post-transcriptional gene regulatory mechanism in the adipose tissue would be a relevant mechanism the selective inhibitory effect of irbesartan on IL-6 expression [31], further investigation is necessary to elucidate the molecular mechanism in detail.

We previously cloned ATRAP as a molecule which interacts with AT1R, and showed that ATRAP suppressed the Ang II-induced hypertrophic and proliferative responses of cardiovascular cells by inducing AT1R internalization [32, 33]. Thus, a tissue-specific regulatory balancing of ATRAP and AT1R expression may be involved in the modulation of AT1R signaling in each tissue [34-37]. We previously showed a tissue-specific regulatory balancing of the expression of ATRAP and AT1R during the development of hypertension and cardiac remodeling in spontaneously hypertensive rats (SHR) and suggested that the up-regulation of cardiac ATRAP/AT1R ratio may be one of the therapeutic benefits [38]. We also found that prepubertal transient blockade of AT1R signaling exerts a long-term therapeutic effect on salt-induced hypertension and renal injury in Dahl Iwai salt-sensitive rats, partly through a sustained enhancement of renal ATRAP expression, thereby suggesting ATRAP a novel molecular target in salt-induced hypertension and renal injury [39]. In the present study, the treatment with irbesartan exerted an inhibitory influence on the adipose tissue AT1R gene expression with a concomitant preservation of adipose tissue ATRAP gene expression, thereby improving the adipose tissue expression balance between ATRAP and AT1R in KKAy mice. Therefore, it is suggested that the irbesartan-induced beneficial suppressive effect on the leptin-IL-6 axis in the adipose tissue in KKAy mice is partly mediated by a trend of up-regulation of the adipose ATRAP/AT1R ratio as one of pleiotropic effects of irbesartan.

Irbesartan was generously gifted from Dainippon Sumitomo Pharma Co., Ltd (Osaka, Japan). This work was supported by a Health and Labor Sciences Research grant and by grants from the Japanese Ministry of Education, Science, Sports and Culture, the Salt Science Research Foundation (No. 1428), the Yokohama Foundation for Advancement of Medical Science and the Kidney Foundation, Japan (JKFB13-17).