Background: Genome-wide-association studies have identified the TMPRSS6 polymorphism rs855791 has the strongest association with red blood cell indices or iron parameters in general population. Whether this genetic variant influences the susceptibility of iron deficiency anemia (IDA) in women with menstruation has not been well studied.

Methods: In this case-control study, we enrolled 67 women with IDA and 107 healthy volunteers, and analyzed their complete blood counts, rs855791 genotypes, and menstrual amounts. Menstrual blood loss was evaluated with a pictorial blood-loss assessment chart.

Conclusions: Our study suggests homozygosity for TMPRSS6 rs855791 C genotype has a protective role against IDA in women at reproductive age, especially in those with menorrhagia.

Iron deficiency is the most common nutritional disorder worldwide. As well as affecting a large number of children and women in non-industrialized countries, it is the only nutrient deficiency which is also significant prevalent in many industrialized nations [1]. Menstruating women have been recognized to be among the most likely individuals to develop iron deficiency anemia (IDA) and its prevalence is 6-22% in developed countries [2-5]. Even though menorrhagia serve as a major contributing factor of IDA in this population, it is not uncommon that women with heavy menstrual loss have normal hemoglobin (Hb) levels and adequate iron stores [2]. Individual susceptibility to IDA varies. However, whether genetic variants play a role in IDA pathogenesis remains unclear.

Hepcidin is the core of iron metabolism and is tightly regulated by several mediators [6]. Matriptase-2 is an important one and down regulates hepcidin expression through cleaving membrane-bound hemojuvelin, which can enhance hepcidin transcription [6]. Complete loss of function mutation of matriptase-2 leads to a rare disease, iron-refractory iron deficiency anemia (IRIDA) [7, 8]. Patients with IRIDA have high serum hepcidin levels and cannot absorb iron from intestine. It is of interest that whether genetic variants with incomplete loss of function of matriptase-2 will be associated with IDA in general population.

Recently, several genome-wide association studies identified several single nucleotide polymorphisms (SNPs) that influence blood cell phenotypes [9-13]. Among these SNPs, rs855791 has the strongest association with red blood cell indices and iron parameters in general population [12, 13]. This SNP is located in the functional part of TMPRSS6 and the rs855791 (2321 C>T) causes a nonsynonymous substitution that reduces the ability of the enzyme to inhibit hepcidin transcription [14]. To investigate the role of this genetic variant rs855791 on the susceptibility of IDA in menstruating women, we conducted this case-control study.

Female patients with microcytic anemia were screened at hematologic clinics for IDA. IDA was defined as a hemoglobin level < 12 g/dL and a ferritin level < 10 ng/mL [2, 15]. The evaluation for IDA included a physical examination, history taking, renal function test, and stool occult blood test. For those without an adequate response to iron replacement (oral elemental iron 300 mg/day for 2-4 weeks), Hb electrophoresis and brilliant cresyl blue staining tests were used to exclude thalassemia. Healthy women with regular menstruation were enrolled as the control group; most of them were staff in our institute. Complete blood counts and ferritin levels were measured and only those with normal Hb and ferritin levels were included in the analysis. An in-person questionnaire was administered to every subject in this study, which included information on menstrual, medical and surgical history. The exclusion criteria for both groups included gastrointestinal bleeding, thalassemia, renal insufficiency, menopause, and history of gastrointestinal resection. This study was performed in accordance with the declaration of Helsinki, and approved by the Ethics Committee of Chang-Gung Memorial Hospital (99-0482B) and informed consent was obtained from all participants.

Menstrual blood loss was evaluated with the pictorial blood-loss assessment chart (PBAC) [16], a semi-quantitative method used to estimate menstrual amount and has been validated in many studies [17-19]. Menorrhagia was defined as a PBAC score of more than 100 during one menstrual period, which corresponds to a blood loss of more than 80 mL [16].

Continuous variables are presented as mean ± standard deviation; categorical variables are presented as numbers and percentages. Categorical variables were analyzed by Chi-square or Fisher's exact tests. Student's t-test was used to examine continuous variables with normal distributions. Linear correlation and regression was used to evaluate the correlations between age, Hb levels and menstrual amounts. Odds ratio (OR) and confidence interval (CI) were tested by binary logistic regression. A p-value of less than 0.05 was considered statistically significant.

Laboratory data and menstruation amount of both groups

Finally, we investigated the influence of rs855791 on RBC parameters, ferritin levels, and log(ferritin) value based on the control group data. However, we did not find a difference between the genotypes in our study (data not shown). 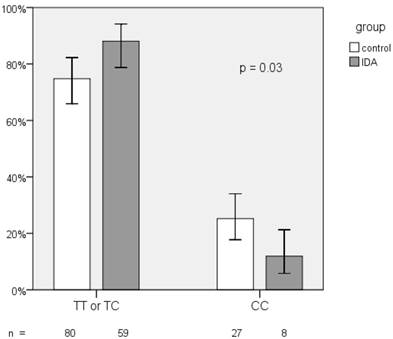 Subgroup analysis of TMPRSS6 rs855791 genotypes according to menorrhagia

Frequency distribution of TMPRSS6 rs855791 genotypes between IDA and control groups according to (A) non-menorrhagia and (B) menorrhagia.

Linear correlation between menstrual amounts and hemoglobin levels were analyzed according to genotypes of TMPRSS6 rs855791 (A) TX (TT or TC) and (B) CC. There was an inverse correlation for women with genotypes TX, but not for those with genotype CC. PBAC, pictorial blood-loss assessment chart.

In this study, we evaluated whether the TMPRSS6 rs855791 polymorphism influencing IDA susceptibility in menstruating women. There were fewer women with CC genotype in the IDA group and this difference became more obvious when the analysis was confined to those with menorrhagia. This result suggested that rs855791 C homozygotes have a lower risk to have IDA, especially those with menorrhagia. Then, we explored the influence of this SNP on menstrual amount effect to IDA. For women with genotypes TX, Hb levels were inversely correlated with the PBAC scores. This result was compatible with the general concept that more menstrual loss would result in greater iron loss and subsequent IDA. However, this correlation was not significant in the C homozygotes. This provides evidence that rs855791 C homozygotes serve a genetic protective factor against IDA. For the first time, we demonstrate that the higher ferritin levels of 736A homozygotes in the general population will transform into the lower susceptibility to IDA in women, especially for those with menorrhagia [13].

In our study, menorrhagia is still the major cause of IDA in reproductive-age women [2, 20]. Menstrual amount increased with age and the mean age of IDA group was older than control group; these phenomena were in line with previous reports the prevalence of menorrhagia increases with age, as does the risk of IDA [21]. However, the association between menstrual blood loss and IDA was no more significant for women with CC genotype. Addition to well-known risks contributing to IDA in this population, such as vegetarian and gastrointestinal bleeding, our result demonstrates that a genetic factor can also affect the susceptibility of menorrhagia-associated IDA.

Our study also provided the first report of rs855791 allelic frequency in Taiwan, located in East Asia. The C allele frequency in our control group was 48.6% (104/214) which is similar to that in European epidemiologic studies (approximately 50%) and higher than that in reported Asian countries (39-47%) [22]. However, the C allele frequency is reported to be 82 to 93% in African population; this high prevalence may confer an advantage of enhanced iron absorption during food shortages or provide some protection against parasites that invade RBCs, such as malaria [22].

The SNP rs855791 locates in the catalytic domain of matriptase-2. Nai et al. recently showed that the rs855791 C genotype inhibits hepcidin more efficiently than the T genotype in vitro and then confirmed that C homozygous individuals have lower serum hepcidin levels and higher transferrin saturation than those with T homozygotes in the general population [22]. However, they excluded iron-deficient subjects, a population of great interest to us. Very recently, a population-based study showed the TMPRSS6 genetic variants, including rs855791, are associated with IDA susceptibility in elderly women [23]. The OR of the protective allele was relative insignificant (OR, 0.56; 95% CI, 0.51 - 0.63) based on their large sample size (n = 2,139); and the reason may be that most of their study population was post-menopausal and at relatively low risk for IDA. In our study, we selected a population at high-risk for IDA, that is, menstruating women. With the enhancement of menstrual blood loss, the role of this SNP would be highlighted. Furthermore, most of the subjects in our study (>98%) have PBAC scores and these data allowed us to perform additional analysis according to menstrual amount. Then, we could clarify the protective role of this polymorphism in menorrhagic women.

We did not measure hepcidin levels in our subjects. Therefore, we could not analyze the correlation between rs855791 and hepcidin levels. According to Nai's study, C homozygotes have lower hepcidin levels than T homozygotes in the general population [22]. We speculate that the protective role of C homozygous rs855791 in our study is due to decreased hepcidin levels. Besides, because mammals lack a regulated pathway for iron excretion [6], it is likely that women with the CC genotype increase the iron absorption from the intestine through decreased hepcidin production and then can offset the menstrual losses. From clinical aspect, iron replacement till 3 to 6 months after relieving anemia is recommended [15]. Then, how to prevent relapse may be determined by this genetic variant. For those with CC genotypes, diet modification may be enough to keep iron balance; otherwise, long-term iron replacement till menopause may be considered.

In conclusion, our data showed that TMPRSS6 rs855791 CC genotype is less frequent in reproductive-age women with IDA than in healthy women. Menorrhagia is the major risk factor for IDA in menstruating women with TX genotypes, but not for those with CC genotype. Homozygosity for rs855791 C genotype plays a protective role against IDA, especially for those with menorrhagia.

This work was supported by grants from Chang Gung Memorial Hospital (grant no. CMRPG 891201).