Uterine myomas are the most common gynecologic tumor in women of reproductive age. Treatment options of uterine myomas consist of surgical, medical and interventional therapy such as uterine artery embolization or myolysis. Given that it is the most common type of tumor in women of reproductive age, the treatment of uterine myomas must prioritize uterine conservation. There are several drugs for medical treatment of uterine myoma such as gonadotropin releasing hormone (GnRH) agonist, selective estrogen receptor modulator (SERM) and antiprogesterone. The objective of this study was to compare the effect of GnRH agonist, SERM, and antiprogesterone in the treatment of uterine myomas in vitro. The effect of drugs was evaluated through the cell viability assay in cultured leiomyoma cells, western blot analysis of proliferating cell nuclear antigen (PCNA), and BCL-2 protein expression. As a result, mifepristone single-treated group represents the most significant reduction in myoma cell viability and proliferation. When pretreated with leuprolide acetate, raloxifene shows more significant reduction in myoma cell viability and proliferation than mifepristone. This study suggests one of the possible mechanisms how medications act on uterine myoma, especially at the molecular level.

Uterine myomas are the most common gynecologic tumor in women of reproductive age, with the prevalence from 20% to 40% depending on the method of diagnosis. Symptoms associated with these smooth muscle cell tumors include menorrhagia, dysmenorrhea, pelvic pain, pelvic pressure, and infertility. Although uterine myomas are the indication for almost 40% of hysterectomies, most patients are asymptomatic[1].

Etiology of uterine myomas is still unknown, it is generally agreed that growth of these tumors is affected by concentration of sex hormones, proliferation and apoptosis of myometrial cell, and accumulation of extracellular matrix.

There are several drugs for medical treatment of uterine myoma such as GnRH agonist, SERM and antiprogesterone. It has been demonstrated that GnRH agonist treatment in patients with uterine myomas reduces tumor size, and suppresses some growth factors that are required for tumor growth [2]. Raloxifene is a SERM which binds to the estrogen receptor and behaves as an estrogen antagonist in some tissues while working as an estrogen agonist in other tissues. In a recent clinical study, raloxifene inhibited the growth of uterine myomas in premenopausal women, and significantly decreased the volume of the uterine myomas in postmenopausal women [3, 4]. Mifepristone, a synthetic steroid with antiprogesterone and antiglucocorticoid activity, is effective in treating uterine myomas resulting in symptom relief and reduction of tumor size[5].

Five uterine myoma tissues were obtained under patient consent, from women who underwent hysterectomy or myomectomy for medically indicated reasons at Seoul St. Mary's Hospital. Informed consent was obtained from each patient before surgery for the use of uterine tissues for the present study. Approval for use of uterine leiomyoma was granted by the Institutional Review Board of Seoul St. Mary's Hospital. The patients ranged in age from 31 to 56 years, with a mean age of 41.2 years. One patient was a postmenopausal woman. Four patients with regular menstrual cycle underwent surgery during early proliferative phase of the cycle without previous hormone therapy.

Uterine myoma tissues were dissected from the uterus and washed with phosphate-buffered saline (PBS). The tissues were minced into small pieces and digested in 1.5 mg/ml collagenase IV and 50 mg DNase I at 37℃ for 3 hours. The leiomyoma cells were collected by centrifugation at 1,200 rpm for 3 minutes and washed 3 times with PBS. Isolated leiomyoma cells were cultured in 100 mm2 culture dishes at 37℃, 5% CO2 in a humidified atmosphere in phenol red-free Dulbecco's modified Eagle's medium/F12 (DMEM/F12; Gibco Life Technologies, Grand Island, NY) supplemented with 10% fetal bovine serum, and 100U/ml penicillin. The morphological characteristics were observed daily under inverted microscope with the medium changed every two days. When cells reached saturation, they were isolated with Trypsin-EDTA.

Immunohistochemical assay was performed to evaluate the expression of estrogen receptor (ER) and progesterone receptor (PR) on cultured uterine leiomyoma cells. Each 4-µm-thick uterine myoma sample was obtained and processed as below. Each specimen was prepared with the ThinPrep1 Processor (Cytyc, Boxborough, MA) according to the manufacturer's manual. Immunohistochemical staining for ER and PR was done on a ThinPrep slide using the BenchMark XT automated slide processing system (Ventana Medical System, Tucson, AZ, USA). The following rabbit monoclonal antibodies were used for primary antibody: ER (Predilute, SP1, Ventana, USA) PR (Predilute, 1E2, Ventana). We considered ER and PR assays positive, if there are at least 1% positive tumor neuclei in the ThinPrep slide [9].

After being treated with the corresponding reactants in serum-free DMEM/F12 for 48 and 72 hours in a 96-well tissue culture plate, the data were analyzed at 450 nm and evaluated with 3-(4,5-dimethylthiazol-2-yl)-2,5-diphenyl-tetrazolium bromide (MTT, Colorimetric assay kit, Chemicon Inc., CA, USA) which is modified from the tetrazolium based colorimetric assay.

To extract proteins for western blot analysis, leiomyoma cells were cultivated in 1 x 106/ml concentration on 100 ㎟ dishes then isolated by centrifugation. Once drug treated, cells were lysed at 4°C for 30 minutes in the presence of a lysis buffer. The lysates were subsequently centrifuged at 12,000 rpm for 30 minutes at 4°C and the supernatants were collected. Protein content in the supernatants was determined Bio-Rad Protein Assay (Bio-Rad, Philadelphia, PA). Each 50 ㎍ aliquots of the extracted protein were boiled for 5 minutes then treated with electrophoresis for 2 hours with 100 V in 10% sodium dodecyl sulfate (SDS)/polyacrylamide gel. They were then transferred onto a nitrocellulose paper under 360 mA for 1 hour and the membrane was eliminated of impurities in 5% nonfat milk and 0.05% Tween 20 solution for 1 hour.

The data were expressed as the mean ± SD from at least three independent experiments. Statistical significance was determined using paired t-test. A difference with a p < 0.05 was considered statistically significant.

Presence of immunoreactive cells for ER, PR in myoma cells

The ER-, PR-expressions in cultured myoma cells were investigated with immunohistochemistry assay. ER and PR were scored at 5, showing a strong positive reaction. Fig. 1 shows cells stained for ER and PR expressions in the myoma cell.

Effect of leuprolide acetate, raloxifene, and mifepristone on proliferation of myoma cells 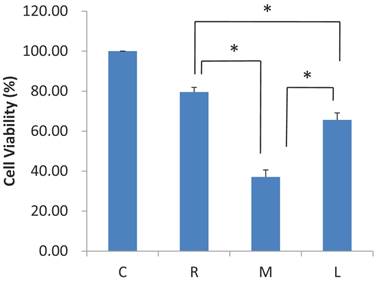 Effects of leuprolide acetate, raloxifene, and mifepristone on PCNA and BCL-2 expression

Western blot analysis of PCNA-positive cells and BCL-2 protein in cultured myoma cells revealed the same result in MTT analysis. In comparison with the control group, PCNA expressions were most significantly reduced in the mifepristone-treated group. In this group, however, the expression increased when pretreated with leupolide acetate (Fig. 4A). For the raloxifene treated group, PCNA expression was reduced when pretreated with leuprolide acetate than when not pretreated. 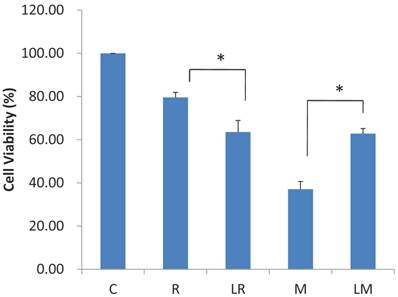 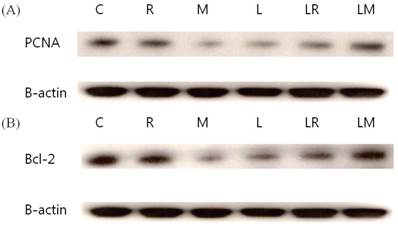 This study was designed to compare the effect of GnRH agonist, SERM, and antiprogesterone in the treatment of uterine myomas in vitro. In clinical setting, there was no way to compare those antiproliferative effects directly because of the large number of conditions that could not be controlled.

PCNA is a molecule confined to the nucleus of proliferating cells. The determination of PCNA can be useful in the analysis of cell proliferation[12]. As a result, mifepristone single-treated group represents the most significant reduction in myoma cell viability and proliferation. This finding corresponds well with those of the clinical studies which report that mifepristone has been shown to decrease uterine myoma size and menstrual blood loss. When pretreated with leuprolide acetate, raloxifene shows more significant reduction in myoma cell viability and proliferation than mifepristone. This result is similar to the clinical finding in the earlier study.

In postmenopausal women, raloxifene was more effective in treating uterine myomas in premenopausal women due to the markedly decreased levels of circulating estrogen. According to a clinical study, the use of raloxifene appears to be a safe treatment for postmenopausal women affected by uterine myomas in terms of reducing tumor dimensions, incidence of amenorrhea, and the number and severity of abnormal uterine bleeding episodes. Based on these studies, the effect of raloxifene as a medical treatment of uterine myomas will be augmented in the hypoestrogenic status, and is therefore expected to be most effective in treating postmenopausal or elderly premenopausal women. The effectiveness will be further improved if the hypoestrogenic status is maintained simultaneously by treatments such as GnRH agonist therapy along with raloxifene treatment. This study has also proved that the myoma cell viability of the raloxifene group pretreated with leuprolide acetate was further reduced in comparison to the control group, which is consistent with the conclusions of previous studies. These findings demonstrate the similar results of the previous clinical studies, especially at the molecular level.

This research was supported by Basic Science Research Program through the National Research Foundation of Korea (NRF) funded by the Ministry of Education, Science and Technology (2012R1A1A3020083). The authors thank Chae-Rim Lee for manuscript preparation assistance.