This study investigated the morphology and structure of pelvic floor in 50 nulliparous and 95 postpartum women (47 vaginal delivery, 48 Cesarean section) using translabial three-dimensional (3D) ultrasound. All the primiparae underwent ultrasound examination within one week after their first delivery. Volume datasets were acquired and analyzed to determine the alterations of levator hiatus after childbirth. Significant differences were observed in the levator hiatus of postpartum women compared with that of nullipara women. In postpartum women, the levator hiatus, with their dimensions increased, expanded into a circular shape. Puborectalis was avulsed in eight cases (accounting for 8.42% of all) and pelvic organ prolapse was found in 12 cases (accounting for 12.63%). The hiatal dimensions were larger and the incidence of pubrectalis muscle avulsion (17.02% vs. 0%) and pelvic organ prolapse (21.28% vs. 4.17%) was significantly higher in Vaginal delivery group than Cesarean section group. In summary, 3D ultrasound is an effective tool to detect the pelvic floor of postpartum women who present with morphological abnormalities, and such abnormalities are more likely to show in vaginal delivery women compared to Cesarean section.

Morphological changes of levator hiatus during pregnancy and delivery may have clinical significance in the subsequent development of PFD. Childbirth results in increased distensibility of the levator hiatus, and the enlargement of hiatus is more obvious especially after levator ani avulsion. A population-based study reported that women undergoing either vaginal delivery or Cesarean section had a greater risk of developing pelvic floor dysfunctions than nulliparous women. Alterations in levator biometry, structure and function are also associated with the mode of delivery. Women with vaginal or operative vaginal delivery had a significantly larger hiatal area and transverse diameter than women who delivered by Cesarean section[6]. Vaginal delivery is associated with an increased rate of avulsion of puborectalis component of the levator ani muscle, and the use of forceps or vacuum also increases the damage[7-8]. A lower pelvic floor muscle strength was observed in women with a history of vaginal delivery compared to those undergoing Cesarean section[9-10]. In addition, recent studies showed that childbirth-related trauma may involve not only the levator ani muscle but also damage to fascia and connective tissue[11-12].

Alterations of the levator hiatus morphology following delivery have been demonstrated using magnetic resonance imaging (MRI) and more recently, three-dimensional (3D) ultrasound imaging[13-16]. This study utilized 3D ultrasonography to assess the morphological alterations of levator hiatus in women undergoing vaginal delivery and Cesarean section one week after their first delivery and compared it with nulliparous female, aiming to provide imaging basis for the study of relationship between delivery and PFD.

This study was undertaken in Shanghai Jiao Tong University Affiliated Sixth People's Hospital where 2800 deliveries took place per year. The female who gave birth between July 2012 and February 2013 in the Department of obstetrics were recruited into the postpartum group. Inclusion criteria were an uncomplicated singleton pregnancy, at 37-42 weeks' gestation and first delivery. Women who developed pathology during the pregnancy were excluded (such as gestational hypertension, diabetes, intrauterine growth restriction and PFD). These women were divided into two groups based on their type of delivery: Vaginal delivery group and Cesarean section group. All of the vaginal primipara showed cephalic presentation and had a spontaneous vaginal delivery without instrument-assisted; Cesarean sections were planned pre-labor. Recruitment of the controls was primarily from the normal nullipara who came to the department of Gynecology because of irregular menstruation, colpitis, pelvic inflammatory disease, and so on. Those with a history of miscarriage at 16 weeks, previous PFD or pelvic floor surgery, pelvic tumor or chronic cough were excluded. Recruitment continued until a minimum of 50 patients per group was reached. A total of 100 postpartum women (Postpartum group) and 50 nulliparas (Nullipara group) were recruited from July 2012 to February 2013. Local Ethics Committee approval was obtained. All women gave their informed consent before being enrolled in this study.

Imaging was performed using GE Voluson E8 (GE Medical Systems, Zipf, Austria) with RAB4-8-D 3D volume probe. The probe was covered with a glove and placed on the perineum in the sagittal plane. Volume datasets (at rest, on maximum Valsalva and maximum pelvic floor contraction) were acquired in supine position after voiding, and were processed offline using 4D View software Version 1 (GE Medical systems). The morphology and structure of levator hiatus (the hiatal dimensions, puborectalis and pelvic organs) were observed and compared between groups. All ultrasound volumes of postpartum women were acquired at 5-7 days (in 1 week) after delivery by two experienced sonographers.

The plane of minimal hiatal dimensions: mid-sagittal plane (A) and axial plane (B). 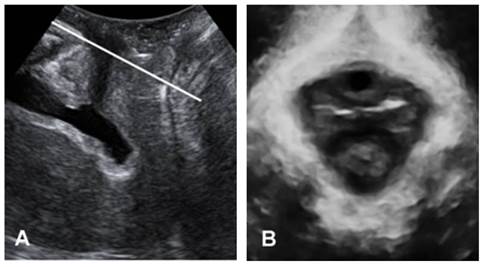 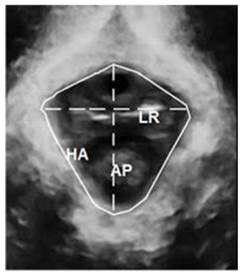 Two-dimensional (2D) ultrasound were used to determine pelvic organ prolapse in midsagittal plane on maximal Valsalva maneuver (best of at least three maneuvers)[19]. The inferiorposterior margin of the symphysis pubis serves as a line of reference. On maximum Valsalva, the maximum descent of the bladder, the cervix or vaginal vault, the cul, the sac and rectum were determined relative to the reference line. In normal condition, the leading edge of pelvic organs was above the reference line; otherwise, it was defined as pelvic organ prolapse.

Three women in Vaginal delivery group and two primipara in Cesarean section group were excluded from analysis because of their inability to perform a maximum contraction or Valsalva maneuver, leaving 47 datasets in Vaginal delivery group and 48 datasets in Cesarean section group. Satisfactory volume datasets were obtained in all nulliparae and 95 postpartum women.

Table 2 shows the measured biometric parameters of the three groups. Compared with the Nullipara group, the HA, AP and LR of the levator hiatus in postpartum women were significantly increased at rest, on maximum Valsalva and maximum pelvic floor contraction, and hiatal dimensions in Vaginal delivery group were larger than that in Cesarean section group (P<0.001).

Levator hiatus was in rhombic shape with compact structure, outlined by puborectalis and pubis. Puborectalis formed a symmetrical and continuous V-shaped sling running from the pelvic sidewall towards the anorectal junction. On the ventral side, puborectalis closely attached to the interior edge of the pubic ramus and surrounded the posterior rectum on the dorsal side. On TUI, the fibers of puborectalis at the site of its insertion were continuous on maximum pelvic floor contraction; avulsion was not detected. On maximum Valsalva, none in Nullipara group was found with pelvic organ prolapse in midsagittal plane. In the axial plane, urethra, vagina and rectum were observed in a line in ventridorsal orientation inside the levator hiatus with clear boundaries. 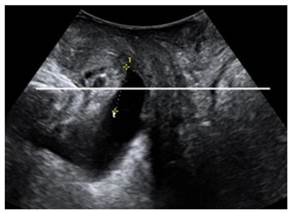 Ever since pelvic floor dysfunction disease attracted our attention, pelvic floor assessment and pelvic floor damage have been widely reported or speculated. A majority of women who have given birth are affected by different degrees of pelvic floor trauma. It seems that the assessment of levator hiatus and diagnosis of levator trauma is more repeatable when undertaken with the help of imaging. Magnetic resonance imaging (MRI) once dominated the assessment of pelvic floor; however, it suffers a number of shortcomings such as high cost, restricted accessibility, lack of dynamic imaging ability, unsuitable for women with IUD or cardiac pacemaker. With the emergence of 3D ultrasonography, the study of the levator hiatus has become easier. Rendered 3D volume, with datasets obtained every second, enables visualization of the axial plane, providing good spatial and superior temporal resolution. Apart from that, its low cost, easy accessibility and real-time recording of dynamic changes of pelvic floor makes it ideal for the study of morphological and functional alterations of pelvic floor. Modern 3D ultrasound systems allow tomographic imaging. The diagnosis of levator trauma by TUI is probably the most repeatable technique nowadays, and has been verified to be comparable to MRI [20-21].

This study, using 3D ultrasound, illustrated several morphological alterations in the pelvic floor of postpartum women compared to nulliparas. In the Postpartum group, the hiatal dimensions were larger, the morphology tended to be circular, and puborectalis avulsion and pelvic organ prolapse were also detected.

During delivery, levator ani extended by about 25-245%, allowing the levator hiatus to widen during crowning of the fetal head[22]. Vaginal delivery has been associated with levator trauma, with the assumption being that levator avulsion occurs during crowning of the fetal head[23]. Major levator ani defects are associated with a decrease in pelvic floor muscle contraction strength[24] and are a risk factor for levator hiatus “ballooning”, which is the mechanism leading to pelvic organ prolapse[25]. Several studies have investigated that levator avulsion, poor pelvic floor muscle contractility and hiatal ballooning were strong risk factors for recurrence after prolapse repair[26-27].

It is assumed that support of the female urethra and bladder is maintained by paraurethral and paravaginal fascial structures, pubourethral ligament and levator ani muscle. Due to inadequate clinical assessment technique or possibly an insufficiently sensitive imaging method, the diagnosis of fascial defects has still been regarded as a challenge. We would like to believe that cystocele occurred in 12 postpartum women may be due to weakening or trauma to either the levator ani muscle or the fasical structures. Further studies in this field will fucous on the imaging appearance of fascial abnormalities.

There are several limitations of our study that should be mentioned. As we did not obtain ultrasound volume datasets prior to childbirth in Postpartum group, peripartum changes in individual patients could not be analyzed. We performed our examinations relatively early in the postpartum period, which means that some of the changes the patients presented may be reversed, such as those due to transient neuropathy; therefore, long-term follow-up observation is underway to establish their true significance and changes of recovery.

The Natural Science Foundation of Shanghai funded project is acknowledged for the financial support for this work (13ZR1431300).