We examined the effects of overexpressed human chymase on survival and activity in lipopolysaccharide (LPS)-treated mice. Human chymase transgenic (Tg) and wild-type C57BL/6 (WT) mice were treated with LPS (0.03, 0.1 and 0.3 mg/day; intraperitoneal) for 2 weeks. Treatment with 0.03 mg LPS did not affect survival in either WT or Tg mice. WT mice were not affected by 0.1 mg/day of LPS, whereas 25% of Tg mice died. Survival of mice treated with 0.3 mg/day of LPS was 87.5% and 0% in WT and Tg, respectively. LPS-induced increases in chymase activity in the heart and skin were significantly greater in Tg than WT mice. These data suggest a possible contribution of human chymase activation to LPS-induced mortality.

Sepsis is a common problem in intensive care units, and is frequently complicated by the development of septic shock and multiorgan failure, reaching a mortality rate of nearly 50% [1]. Endotoxins such as lipopolysaccharide (LPS) released from gram-negative bacteria cause sepsis, which can be reproduced in experimental animals by the administration of LPS [2]. Sepsis is associated with cardiovascular dysfunction characterized by hypotension and decreased systemic vascular resistance, leading to high mortality rates [3], and the release of various inflammatory mediators [4]. The pathophysiological mechanisms responsible for LPS-induced cardiovascular dysfunction involve several mediators, including cytokines, angiotensin II, nitric oxide and catecholamine [5-7]. Suzuki et al. [8] showed that suffusion of LPS on the in situ hamster spinotrapezius muscle for 60 min elicits an immediate, reversible biphasic vasomotor response, vasoconstriction followed by vasodilatation, and increased accumulation of perivascular mast cells having chymase-like activity. Furthermore, both chymase inhibitors and AT1 receptor blockers abrogate LPS-induced responses [8], indicating a potential role for hamster chymase in the pathophysiology of septic shock. However, whether a similar role exists for human chymase has not been established. We sought to investigate the possible contribution of human chymase to LPS-induced mortality. Therefore, survival rate and chymase activity in the heart and skin were measured in transgenic mice carrying the human chymase gene [9].

All experimental procedures were performed according to the guidelines for the care and use of animals established by Kagawa University. The experiment was performed in male transgenic mice (18-20 weeks of age) carrying the human chymase gene (Tg) [9] and male wild-type C57BL/6 mice (WT). Preparation of the human chymase transgene and production of Tg mice were described previously in detail [9]. Mice were maintained in a pathogen-free facility under controlled temperature (24±2°C) and humidity (55±5%), with a 12 hrs light/dark cycle.

Experimental Protocols and Other Analytical Procedures

Basal chymase activity in the heart and skin (n=6, respectively) was measured in eighteen-week-old Tg and age-matched WT mice. Mice were sacrificed by an overdose of sodium pentobarbital (300 mg/kg, i.p.). The heart and approximately one square centimeter of skin tissue were removed and snap-frozen in liquid nitrogen and stored at -80°C. Chymase activity in the heart and skin was measured as described previously [9]. In the heart, mRNA levels of human chymase, mouse chymase (MMCP-4), angiotensin converting enzyme (ACE) and AT1a receptor were also measured as described previously [10].

Values are presented as the Mean±SD. Statistical comparisons were performed using one-way analysis of variance using a Bonferroni correction. Values of P<0.05 were considered statistically significant.

Significant human chymase gene expression was observed in Tg heart, but not in WT, at baseline (1.00±0.95 and 2.31±1.40 fold respectively, P<0.05). In contrast, mRNA levels of MMCP-4, ACE, and AT1a receptor in heart were not different between Tg and WT mice (data not shown). As shown in Fig. 1, baseline chymase activity in the heart was similar between WT and Tg mice, but was approximately 3-fold higher in Tg skin compared with WT skin. Baseline body weight was significantly lower in Tg mice compared with WT mice (21.5±2.8 and 25.7±2.6 g respectively, P<0.05). The proportion of mice surviving after LPS treatment was evaluated and the data analyzed by a Kaplan-Meier survival curve (Fig. 2). All WT mice (100%) treated with 0.03 and 0.1 mg LPS/day survived 14 days, with survival dropping slightly to 87.5% following treatment with 0.3 mg. In contrast, Tg mice treated with 0.3 mg LPS/day died within 4 days. Tg mice treated with 0.1 and 0.03 mg LPS/day showed 75% and 100% survival, respectively. As shown in Fig. 3A, heart weight per body weight ratio, as an index of cardiac hypertrophy in LPS-treated Tg mice was significantly higher than that of LPS-treated WT mice. Chymase activity in the heart and skin was evaluated in mice treated with LPS (0.03 or 0.1 mg). Heart chymase activity was not significantly different between LPS-treated WT and Tg mice (Fig. 3B). As shown in Fig. 3C, skin chymase activity in LPS-treated Tg mice was approximately 3-fold higher than that in LPS-treated WT mice, whose differences were also observed at baseline. 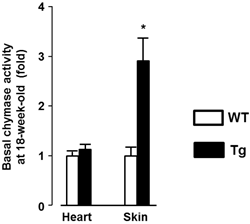 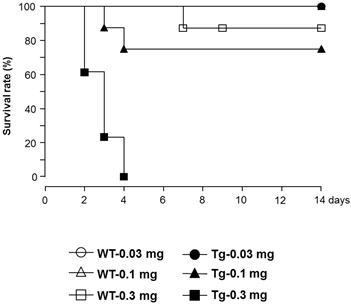 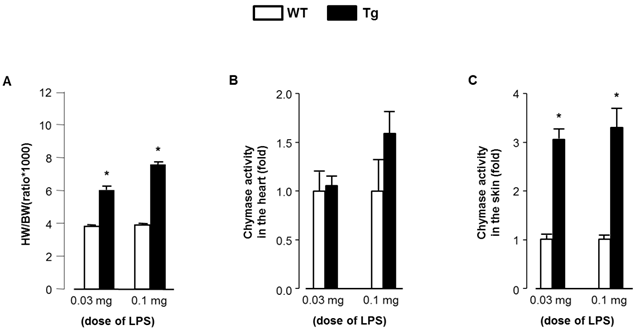 At baseline, human chymase gene expression in heart was significantly higher but chymase activity is similar between WT and Tg mice. Treatment with LPS Tg mice showed cardiac hypertrophy, and heart chymase activity tended to show higher than in WT mice but these changes were not statistically significant. Previous studies showed that sepsis is associated with cardiovascular dysfunction [3]. We therefore speculate that LPS-induced cardiovascular dysfunction may be augmented, at least in part, by over-expression of the human chymase gene. This concept is consistent with a recent study by Koga et al. [9] that showed human chymase expression in mice induces mild hypertension with left ventricular hypertrophy, characterized by cardiomyocyte hyperplasia and increased fibrosis in the left ventricle. From this data it is difficult to explain about the role of human chymase in LPS-induced increase mortality is due to cardiovascular dysfunction. Because of the low prevalence of survival of LPS induced Tg mice, we did not evaluate any cardiac functional parameters. Significant human chymase gene expression was observed in heart of Tg mice, however, chymase activity was not upregulated. From these preliminary data it is difficult to explain why chymase activity was not significantly upregulated in the hearts of Tg mice. Further studies are needed to investigate the role of chymase to the development of LPS-induced cardiac or renal injury. Therefore, studies will be definitely emergence to link chymase activity with these observations.

We observed that Tg mice have phenotypic characteristic of alopecia, consistent with previous studies [9, 11]. However, the mechanisms responsible for alopecia in Tg mice remained unclear. Clinical studies have shown that mast cells are involved in the pathogenesis of various types of hair loss and alopecia. In scarring alopecia [12, 13] and androgenetic alopecia [14], the number of skin mast cells is remarkably increased. An increase in mast cells is potentially one of the reasons for remarkably higher chymase activity in skin than other organs, which may lead to alopecia in Tg mice. This hypothesis is supported by the data in which Tg mice exhibited higher levels of chymase activity in the skin. We also observed similar elevated skin chymase activity between LPS-treated and non-treated Tg mice. However, the pathophysiological impact on the role of skin chymase in LPS-induced mortality remains unknown.

This work was supported in part by a Grant-in-Aid for Scientific Research from the Ministry of Education, Culture, Sports, Science and Technology of Japan (to Akira Nishiyama).