Objectives: This study was to compare the efficacies and side effects of high intensity focused ultrasound (HIFU) treatment for perennial allergic rhinitis (PAR) with regular and increased dosage.

Conclusions: A proper increment of HIFU dosage may be recommended to meet the needs of more improvement of AR symptoms and less recurrence.

As their names are so called, ultrasonic or supersonic waves are mechanical vibrations in solid, liquid, or gaseous mediums, with the frequencies lying above the range of human hearing. Piezo-electric effects are adapted to the generation of ultrasound at frequencies above 500 kc., which is the range most often used in biological work. In 1942, Lynn et al. designed, built and successfully operated an efficient generator of focused ultrasound[1]. The high intensity focused ultrasound (HIFU) could produce focal heating in the centers of paraffin blocks, and destruct focal areas deep in fresh liver tissue with minimal effects at the surface and no effects on the intervening tissue.

Surgical resection has been a standard treatment in selected cases with solid tumors. However, due to the tumor sites, advanced stages, or poor general conditions, many patients can't undergo surgeries. HIFU is a novel non-invasive technique that is able to produce coagulative necrosis at an accurate focal point within the tissue, without damaging overlying and adjacent structures even within the path of an ultrasonic wave[2]. The thermal ablation of tumor with HIFU has been applied to thousands of patients with prostate tumors[3,4], uterine fibroids[5], liver tumors[6], pancreatic cancer[7], bone tumors[8] and renal tumors[9] worldwide over the last ten years.

Ultrasound imaging-guided HIFU (USgHIFU) system [Chingqing Haifu (HIFU) Tech Co., Ltd., Chongqing, China] was first equipped in Asia, then in Europe. In the United States, the Food and Drug Administration (FDA) approved the magnetic resonance guided focused ultrasound surgery (MRgFUS) for clinical treatments of uterine fibroids in 2004. HIFU was demonstrated to be safe, effective and feasible in treating human solid tumors[2]. Several years ago, a CZB-HIFU therapeutic instrument for allergic rhinitis (AR) was developed by the same company and first equipped in China. Currently, this instrument has been applied to patients with moderate to severe perennial allergic rhinitis (PAR). Some patients resistant to drug treatments and those who could not or would not accept nasal spray and oral administration were also considered for HIFU treatment in clinical practice.

A safe dosage of HIFU for AR treatment was recommended for practice. This safe and maybe low dosage led to the following results: less effect and recurring earlier compared with other treatments [10]. We gradually increased the dosage until it was twice the amount of the original one. By dividing the patients into two groups, a group treated by the original dosage and the other group treated by the increased dosage, their curative effects, side effects and satisfaction results were compared.

The study protocol was approved by the Institutional Review Board of the First Hospital of China Medical University. Informed consents were obtained from all patients.

Evaluation of effect and satisfaction

A retrospective review was performed to all patients who underwent HIFU treatment. Surveys were conducted to evaluate symptoms using a visual analog scale grading system before operation, 3 months after operation, and 1year after operation. Nasal obstruction, sneezing, rhinorrhea, and rhinocnesmus were graded by patients using a system scale from zero to ten. Zero referred to no symptoms at all while ten represented the most severe situation which could be imagined by patients. At the final of postoperative survey, patients were all required to self-evaluate their satisfaction of HIFU treatment from zero (completely unsatisfied) to ten (completely satisfied). According to the satisfaction scores, we categorized the satisfaction as excellent (≥9 and ≤10), very good (≥7and <9), good (≥5 and <7), poor (≥3 and <5), and very poor (≥0 and <3).

Furthermore, patients were also asked if they had experienced any postoperative complications. If the answer was “yes”, they would be asked more about the severity and duration of the symptoms, and whether any additional treatment was required to relieve these symptoms.

Before HIFU treatment and 3 months after treatment, biopsy specimens of the inferior turbinate were collected from 11 patients in group A and 10 patients in group B. Three sections of each specimen were HE stained and observed at the magnification of 200×. A high power field with epithelium was randomly selected from each section. The eosinophils, other inflammatory cells and submucosal glands were counted.

Patients were not completely satisfied with topical anesthesia

In group A, 25 patients were given topical anesthesia. 11 of them experienced pain from mild to middle level. 3 of them felt itching and sneezed many times during operation. A young female patient who finally dropped out of this study could not even endure the pain until that we adjusted the power parameter from gear III to gear II. The other 31 patients in group A and all in group B selected general anesthesia.

In both A and B groups, all symptoms (nasal obstruction, sneezing, rhinorrhea and rhinocnesmus) related to AR were improved after treatment. No matter 3 months or 1 year after treatment, all VAS scores of symptoms were significantly lower than those before treatment (p<0.01).

Comparing group A and B, the pre-operation VAS scores of same AR symptom were at the same level. There was no statistical difference observed (p>0.05). 3 months after treatment, there was still no difference in the evaluations of sneezing and rhinorrhea (p>0.05), while better results relating to nasal obstruction and rhinocnesmus were shown in group B than those in group A (p<0.05). At 1 year after treatment, evaluations of all AR symptoms in group B were better than those in group A (p<0.05).

In group A, the VAS scores at 1year were higher than those at 3 months after treatment (p<0.05), which suggested all symptoms had partially come back. In group B, there was no difference observed in any of the four AR symptoms (p>0.05), which means the treatment effects were well kept after a year in this group. (Table 1)

Following treatment, almost all patients in both groups temporarily suffered obvious nasal obstruction caused by swelling mucosa and jelly-like discharge. Mild rhinocnesmus and sneezing might be combined. 7 to 10 days later, these symptoms were markedly relieved automatically in both group A and B. Beside the above side effects, nasal dryness happened in 7.14% (4/56) of patients in group A, and relieved within 3 months. The incidence in group B was 20.83% (10/48), which is statistically higher than that in group A (p<0.05). Most of these cases (9/10) relieved within 5 months. One patient with the longest history of nasal dryness recovered after 8 months. Furthermore, perirhinal swelling was observed in 12.50% (7/56) of patients in group A, which disappeared in 7 to 10 days (average 8 days). In group B, the incidence of perirhinal swelling was 89.58% (43/48), which was significantly higher than that in group A (p<0.01). The swelling cases were all spontaneously healed in 8 to 14 days (average 12 days) (Figure 1). Additional treatment was not necessary for all of above side effects.

Nasal bleeding, synechia, perforation of nasal septum, numbness, headache, or visual disturbance was not found in group A or B.

Compared with the preoperative VAS score of the same group, P< 0.01*

Paired t-test was applied for above statistical analysis (α=0.05)

Kruskal-Wallis Test was applied for the analysis (α=0.05) 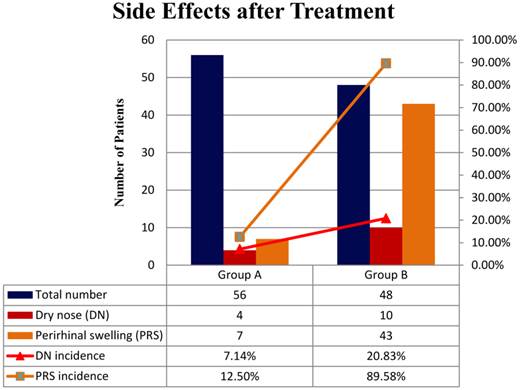 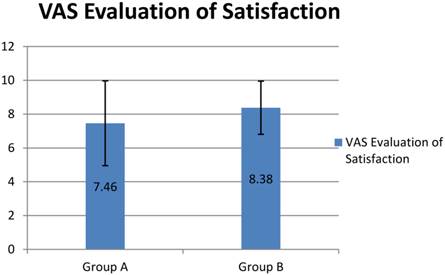 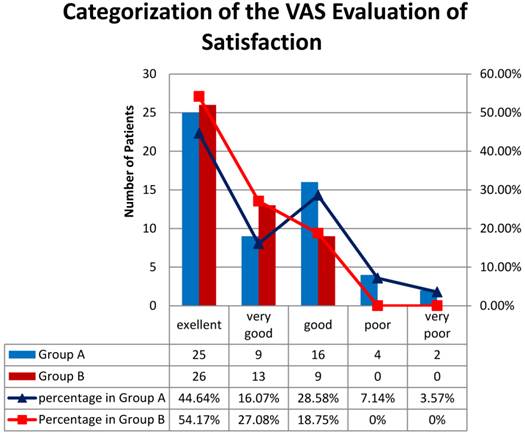 The eosinophils, other inflammatory cells and the submucosal glands were more significantly decreased in group B than that in group A

Obvious interstitial edema, abundant submucosal glands and a lot of inflammatory cells could be observed in the nasal turbinate mucosa of PAR patients. It was changed after HIFU treatment (Figure 4). Morphometric analysis showed that the eosinophils, other inflammatory cells, and the submucosal glands were all decreased at 3 months after HIFU treatment in both group A and B (p<0.001). It was more significant in group B (Table 2).

HIFU treatment for AR has been applied in China for several years. Topical anesthesia was chosen for most cases. Under the power gear III, the total treatment time usually ranged from 360 to 600 sec [10,12]. In this study, we chose 500 sec as the total treatment time in group A and double treatment time in group B. However, the patients were not completely satisfied with topical anesthesia in this study. Irritation of mucosa of nasal cavity might induce the attack of itch and sneezing. Insufficient numbness caused pain at different levels. According to our observation, general anesthesia is recommended.

Histology of the inferior turbinate mucosa before and after the HIFU treatment. Compared to the nasal mucosa of the PAR patients before treatment (A), the ciliated epithelium is well preserved and the interstitial edema is alleviated after HIFU treatment in group A (B). The eosinophils, other inflammatory cells, and the submucosal glands are reduced while more fibrous tissues are present after treatment. These changes are more significant in the specimens obtained from group B (C). CE: ciliated epithelium; E: eosinophil; FT: fibrous tissues; IFC: other inflammatory cells; SMG: submucosal glands.

Compared to the results before HIFU treatment, the densities of the eosinopils, other inflammatory cells, and the submucosal glands of the inferior turbinate mucosa are all very significantly decreased after treatment in both group A and B (p<0.0001). Paired t-test was applied (α=0.05).

On the other side, higher dosage of HIFU treatment caused higher incidence of side effects. The incidences of nasal dryness and perirhinal swelling in Group B were significantly higher than those in group A (p<0.01). The power of HIFU is focused on the submucosal layer of the nasal cavity. In the focal spot, the tissue in a small volume is heated rapidly. Higher temperatures cause tissue boiling and bubble formation[13,14]. Subsequent tissue coagulation and necrosis may directly destruct glands in the submucosal layer and decrease their secretion. The occlusion of blood vessels and thrombus formation reduce the exudation from the plasma. The above changes contribute to relief of mucosal swelling and watery discharge, as well as leading to temporary nose dryness in some cases. The perirhinal swelling was related to the treatment of the innervation area of the anterior ethmoidal nerve. The anterior ethmoidal nerve provides sensory branches to the anterior and superior part of the nasal cavity. It comes from the nasociliary nerve, and gives rise to internal and external nasal branches. Passing the bony margin of piriform aperture, the external branch of the anterior ethmoidal nerve ultimately innervates skin on the lateral side of the nose. As a heating effect of HIFU treatment, edema happened around the pathway of the anterior ethmoidal nerve and its branches. Higher dosage of treatment caused more exudation from the submucosal layer inside the nasal cavity to the subcutaneous layer around the nose.

Vidian neurectomy[15], turbinectomy, electrocautery, cryosurgery, chemosurgery[16], microwave, laser[17] and radiofrequency[18] are most commonly-used surgical treatments for AR. These treatments are proved to be effective while dry eyes, nasal bleeding, crusting, and synechia are often found postoperatively. None of the above side effects was observed in group A or B after HIFU treatment.

In this study, the eosinophils, other inflammatory cells, and the submucosal glands were all decreased in both group A and B at 3 months after HIFU treatment. Compared to group A, the reduction was more significant in group B. It partially explained the better and longer efficacy of the HIFU treatment with higher dosage through pathological study. Vessels and nerves in deeper layers of the inferior turbinate should be changed similarly. Further study might be needed.

At 1 year after HIFU treatment, the self-evaluation of satisfaction in group B was better than that in group A, though not statistically significant (p=0.0866>0.05). A further study with more cases was suggested. Compared with the significant improvement of AR symptoms, the satisfaction of patients in group B might have been decreased by the side effects with higher incidences and longer duration.

1. Lynn JG, Zwemer RL, Chick AJ, Miller AE. A New Method for the Generation and Use of Focused Ultrasound in Experimental Biology. The Journal of general physiology. 1942;26:179-193