Hepatocyte cell adhesion molecule (hepaCAM) was discovered by Shali Shen in 2005[1]. It is a new type of cell adhesion molecules, belonging to the immunoglobulin superfamily. Earlier researchers found that the expression of hepaCAM in bladder cancer cells and tissues was decreased or absent, and over-expression of hepaCAM can inhibit tumor growth[2,3]. For its anti-cancer ability, hepaCAM has been presumed as a tumor suppressor gene. However, the mechanism of hepaCAM gene silencing in cancer is unknown.

DNA methylation is a covalent and reversible chemical modification, resulting from the addition of a methyl (CH3) group at the carbon 5 position of the cytosine ring[4]. Aberrant DNA methylation plays an important role in regulating expression and biological function of TSGs(tumor suppressor genes), and contributing to tumorigenesis. Abundant previous studies showed that abnormal hypermethylation of CpG islands in TSGs promoter were devoted to genes silencing[5], such as RASSF1A, DAPK1, TFPI-2, p16 and CDH1[6-9]. 5-aza-CdR (5-Aza-2'-deoxycytidine) which is a DNA methyltransferases inhibitor has been proved to re-activate the expression of TSGs. For example, 5-aza-CdR induced re-expression of E-cadherin, p15 and p73 gene in cancers[10,11]. For its potent anticancer ability, 5-aza-CdR has been used for treatment of certain leukemia[12].

T24 cell line was kindly donated by infectious diseases institute of Chongqing Medical University, China. BIU-87 cell line was purchased from cell bank of Wuhan University. They were cultured in RPMI1640 (Gibco, American) with 10% fetal bovine serum (Gibco, American) at 37℃ in a humidified atmosphere containing 5% CO2 incubator. 30 cases of paired urothelial carcinoma samples and corresponding adjacent tissues were collected from the department of Urology at the First Affiliated Hospital of Chongqing Medical University, with patients' consent and institutional ethics committee. The tumor grades were evaluated according to the WHO standards (I: 5, II: 22, III: 3) and staging according to the TNM classification guidelines (Ta ~ T1, 18; T2 ~ T4, 12).

Promoter prediction of hepaCAM gene was performed by FirstEF software[13] (http://rulai.cshl.org/tools/FirstEF/). Then, CpG islands was predicted and methprimers for MSP was designed through the bioinformatics program[14] (http://www.urogene.org/cgi-bin/methprimer/methprimer.cgi).

Genomic DNA from cells and tissues was extracted according to the TIANamp Genomic DNA Kit's instruction (TIANGEN BIOTECH,China). The bisulfite modification procedure was carried out using EZ DNA Methylation-Gold™ Kit (Zymo Research). 500ng of genomic DNA was used in bisulfite treatment and the bisulfite-modified DNA was stored at -80℃. Amplification was started in a 20ul reaction volume including 10ul Hot start PCR mix (BIOTAKE, China), 1ul of each primer, 1ul of modified DNA and 7ul of ddH2O. The cycling conditions were performed by initial denaturation at 95℃ for 5min, followed by 40 cycles of 95℃ for 50s, 58.4℃(M)/61.8℃(U) for 50s, 72℃for 1min, and a final extension at 72℃ for 10min. Primers for methylated DNA of hepaCAM were: Left M primer, 5'-AGAATTCGGTTTCGGAGTTTC-3'; Right M primer, 5'-CTAAACGACGACGAATATATCCG-3'. Primers for unmethylated DNA were: Left U primer, 5'-AGAATTTGGTTTTGGAGTTTTGA-3'; Right U primer, 5'- ACCCTAAACAACAACAAATATATCCA-3'. The product sizes of the methylated and unmethylated amplification were 172bp and 175bp, respectively. The products were visualized in a 3% polyacrylamide gel.

5-aza-CdR was purchased from Sigma (USA). It dissolved in dimethylsulphoxide (DMSO) at a stock concentration of 3mmol/L and stored at -80℃. The selection of drug concentrations was referring to previous MTT result[15]. Various concentrations of 5-Aza-CdR (Table 1) were used for 72h in the treatment. DMSO was used as a control.

Total protein was extracted from bladder cancer cell and tissue using lysis buffer with 1mM Phenylmethanesulfonyl fluoride (PMSF). It was denatured in sodium dodecylbenzene sul fonate (SDS) loading buffer at 100℃ for 5min. Protein was electrophoresed in 12% SDS-polyacrylamide gel and transfered to polyvinylidene membranes (PVDF) (Milliproe). The membranes were blocked with 5% skim milk in TBST and then were immunoblotted overnight at 4℃ using anti-hepaCAM antibody (Proteintech, American), β-actin antibody (Santa Cruz,CA). The membranes were incubated with a peroxidase-conjugated goat anti-rabbit or mouse sencondary antibody for 1h at room temperature after being washed by TBST. Proteins were detected using a chemiluminescence (ECL) reagent (Milliproe) by western blotting detection and analysis system.

Cells cultured on coverslips were treated with 5-aza-CdR, and then fixed with 4% paraformaldehyde for 10minutes. They were blocked in 5% goat serum for 1-2h at room temperature before permeabilized with 0.1% Triton X-100 for 15 minutes. Anti-hepaCAM antibody was incubated overnight at 4℃ followed by incubation of FITC-labeled secondary antibody for 1h at room temperature in a moist container in dark. After washing with Phosphate Buffered Saline (PBS), slides were nuclear stained with 4,6-diamino-2-phenyl indole (DAPI). Fluorescence was visualized by fluorescence microscopy.

After treatment with 5-aza-CdR and infection with adenovirus, cells were harvested and washed with PBS three times. Cells fixed with 70% ethanol were centrifuged at 1000×g for 10min to remove ethanol, resuspended in staining solution (1×PBS, 0.1%Triton X-100,20ug/ml propidium iodide and 100ug/ml RNase A) and incubated for 30min at room temperature. Cells were subjected to cell cycle analysis by FACS.

Cell cycle profiles were analyzed by FCM (Fig.1). Overexpression of ectogenic hepaCAM in positive infected group arrested cells in G0/G1-phase (p<0.05). There were no statistically significant difference between the pAdH5 cells and blank cells (p>0.05) (Table 2). 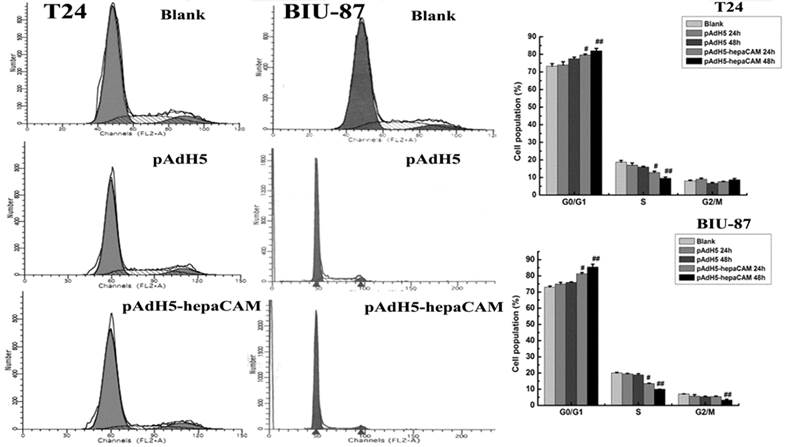 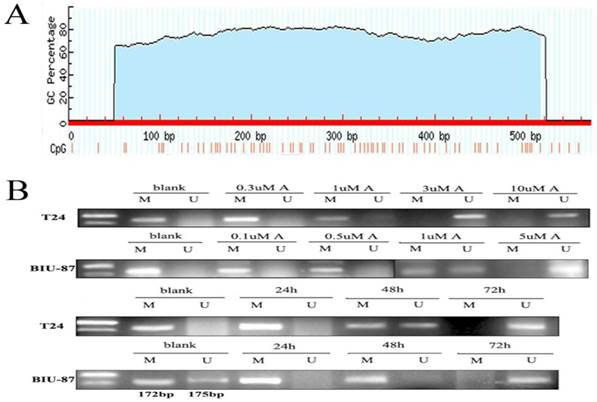 The promoter sequence of hepaCAM

According to previous researches, 5-Aza-CdR can re-activate the expression of TSGs, and has been used for treatment of certain leukemia. So the anti-tumor growth of 5-Aza-CdR in bladder cancer cells was analyzed using FCM. The results showed that cell cycle was arrested at G0/G1 after 5-aza-CdR treatment (Fig.4). Cells with 5-aza-CdR treatment were more statistically significant difference than blank cells and DMSO cells (p<0.05) (Table 3).

Effect of 5-aza-CdR on cell cycle distribution in T24 and BIU-87 cells detected by FCM. 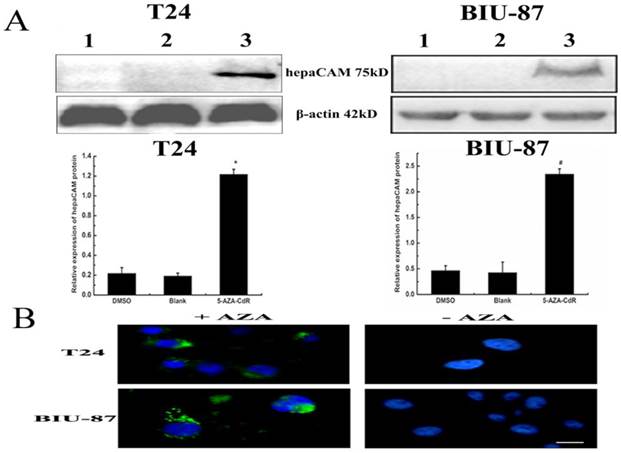 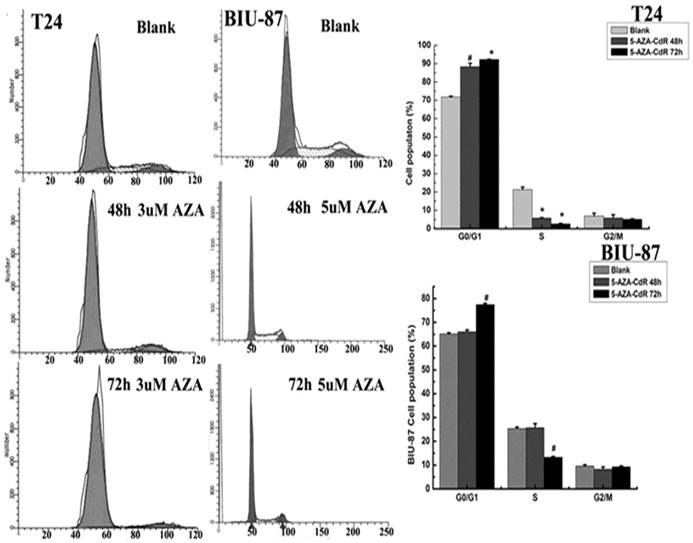 In vitro, hypermethylation of hepaCAM gene promoter was discovered in cell lines. The matter of wheather the same circumstance occurs in patients with bladder carcinoma is unknown. So methylation status of hepaCAM gene promoter was detected by MSP in bladder cancer tissues (Fig.5A). The positive rate of hepaCAM promoter methylation in tumor tissues was 83.33%, which was obviously higher than that in adjacent normal bladder tissues (33.3%, p<0.05). Results of Western-blot revealed that hepaCAM protein mostly expressed in adjacent normal tissues of patients (Fig.5B). It expressed in only few tumor tissues (p<0.01). Spearman correlation analysis demonstrated a negative correlation between expression of hepaCAM protein and its promoter hypermethylation (correlation coefficient r=-0.894, p=0.000) (Table 4). 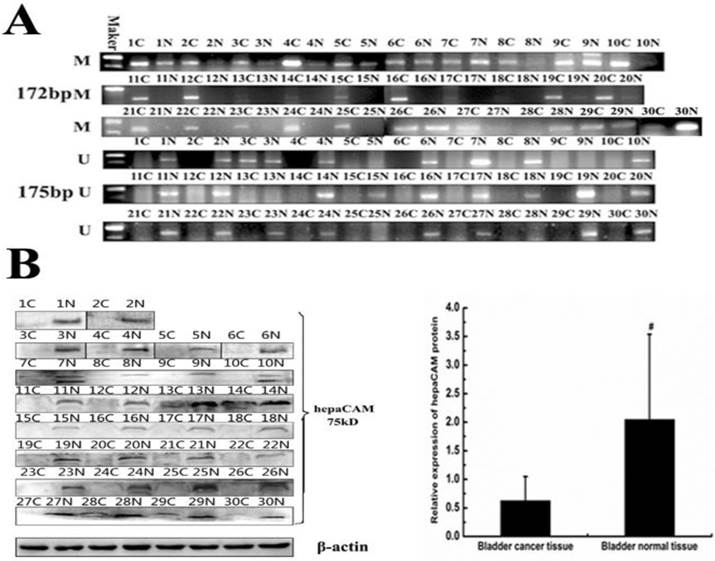 Bladder cancer is the most common cancer in urologic neoplasms in China, and its incidence ranked 8th in systemic malignancy[16]. Bladder transitional cell carcinoma accounted for 90% of bladder tumor[17] and its biological behavior is complicated and changeable, with high heterogeneity and recurrent. The "gold standard" of current clinical diagnosis is cystoscopy with biopsy. This method is traumatic and difficult for patients with invisible tumors.

Methylation of DNA is a chemical modification process. The methyl group of S-adenosylmethionine transfers to the carbon five prime position of a cytosine pyrimidine ring of DNA under the action of DNA methyltransferase (DNMT), forming 5-methylcytosine. DNA methylation is an important mechanism for the inactivation of malignant tumor suppressor genes and occurs mainly in CpG islands[18]. Methylation of CpG islands in suppressor genes promoter occurs in most tumors. Moreover, abnormal DNA methylation occurred in early tumorigenesis, contributing as an ideal marker for early diagnosis of tumors[19]. Some studies have proved that epigenetic changes of multiple TSGs (tumor suppressor genes) were involved in breast pathogenesis[20]. Researchers also demonstrated that aberrant methylated genes played various functions in the cell cycle regulation, proliferation and adhesion[21]. Research of Jelilek J showed that aberrant DNA methylation is associated with CML progression[22]. In addition, Stephen JK' research suggested that abnormal methylation of CASP8, RASSF1, and NIS maybe early changed in thyroid tumorigenesis regardless of cell type[23]. These studies showed that methylation of TSGs promoter played a significant role in tumorigenesis.

To further identify this, T24 and BIU-87 cell lines were treated with different concentration of 5-aza-CdR to investigate the effect of 5-aza-CdR on the expression of hepaCAM mRNA, protein and promoter methylation. 5-aza-CdR covalently binds DNA methyltransferase, which then become trapped and unable to catalyse the methylation of newly synthesized DNA strands[27]. Clinical trials found that DNA methylation gradually disappears in the tumor cells from responders with 5-Aza-CdR treatment[27]. 5-aza-CdR is phosphorylated by deoxycytidine kinase, and its end product, decitabine triphosphate, is incorporated into DNA[28]. Incorporation of a high concentration of decitabine triphosphate into DNA can inhibit DNA synthesis and induce cell cycle arrest[29-31]. 5-aza-CdR has been used in clinical phase III trials patients with Myelodysplastic syndrome (MDS)[28]. Ju Hee Kim's research showed that 5-Aza-CdR can reverse expression of CAMK2B and ARFGEF1, besides hypermethylation of CAMK2B and ARFGEF1can inhibit gene activity in cancer cells[32]. Trenton et al. showed that 5-aza-CdR significantly increased the expression of PHD3[33]. Previous studies demonstrated that treatment of 5-Aza-CdR in corresponding concentration for 72h in T24 and BIU-87 cell lines can reverse the expression of hepaCAM mRNA[15]. These studies revealed that 5-Aza-CdR can also reverse the expression of hepaCAM protein. This drug affects the cell cycle distribution, arresting the cell cycle at G0/G1 phase. It also shows that 5-aza-CdR can restrain bladder cancer cells' growth and reverse the hypermethylation of hepaCAM promoter.

In conclusion, hypermethylation occurs in hepaCAM promoter region. Demethylating drug (5-aza-CdR) can reverse its expression of mRNA and protein, and inhibit the growth of tumor cells. Hypermethylation of promoters is a major gene silencing mechanisms of hepaCAM in human bladder cancer. Further research is required to identify that which promoter sites mostly affects transcriptional level.

This work was supported by National Natural Science Foundation of P.R. China (Grant No. 81072086).

30. Cihak A, Vesely J. Prolongation of the lag period preceding the enhancement of thymidine and thymidylate kinase activity in regenerating rat liver by 5-azacytidine. Biochem Pharmacol. 1972;21:3257-65