Purpose: Abnormal growth of vertebral body growth plate (VBGP) is considered as one of the etiologic factors in the adolescent idiopathic scoliosis (AIS). It was well-known that melatonin was correlated with the emergence and development of AIS. This study aimed to investigate the effect of melatonin on rat VBGP chondrocytes in vitro.

Methods: Chondrocytes were isolated from rat VBGP, and treated with or without melatonin. Cell proliferation was measured by the Alamar Blue assay. Gene expression of collagen type II and aggrecan were evaluated by real-time PCR. Expression of the melatonin receptors (MT1, MT2), proliferating cell nuclear antigen (PCNA, a cell proliferation marker), Sox9 (a chondrocytic differentiation marker) and Smad4 (a common mediator in regulating the proliferation and differentiation of chondrocytes) were detected by Western blotting.

Conclusions: These results suggest that melatonin at high concentrations can inhibit the proliferation and differentiation of VBGP chondrocytes, which might give some new insight into the pathogenic mechanism of AIS.

Adolescent idiopathic scoliosis (AIS) is a three-dimensional structural deformity of the spine which is more commonly seen in girls [1-3]. The longitudinal growth of the human vertebral body is through the growth and development of the growth plate [4]. The proliferation and differentiation of growth plate chondrocytes during the growth period plays a key role in regulation of the development of vertebral growth plate [5]. Growing evidence suggested that the growth kinetics indexes of vertebral body growth plate (VBGP) were higher in AIS patients [6-9]. However, the mechanism of regulating the proliferation and differentiation of VBGP chondrocytes in the AIS patients is largely unknown.

Melatonin, or N-acetyl-5-methoxytryptamin, is a hormone mainly synthesized and secreted by the pineal gland [10]. Melatonin exhibits potential multifunctional bioactivities, such as antioxidative defense, anti-inflammatory, endocrinologic and behavioral effects [10-12]. Melatonin deficiency experimentally induced the development of scoliosis in the pinealectomised chicken model [13-15]. The serum level of melatonin in the patients who had progressive curve was significantly lower than the level in the patients who had a stable curve or in the control subjects [16]. Dysfunction of melatonin signaling pathway occurs in osteoblasts derived from AIS patients [17, 18]. These previous studies support the hypothesis that melatonin deficiency might be correlated with the pathogenesis of AIS. Melatonin was found to play an important role in modulating osteoblastic differentiation and bone formation [19-21]. Recently, melatonin has also been reported to enhance cartilage matrix synthesis of porcine articular chondrocytes [22]. However, the effect of melatonin on the proliferation and differentiation of VBGP chondrocytes remains unclear.

Isolation and culture of rat VBGP-chondrocytes

VBGP chondrocytes were isolated and cultured in vitro with improved trypsin-collagenase type II digestion method [23]. Briefly, the spine samples were obtained from four 1-week-old Sprague-Dawley rats and the VBGP cartilage tissue was carefully separated under a microscope. After washed by sterile phosphate-buffered saline (PBS), the intact VBGP samples were digested in 0.25% trypsin (Sigma-Aldrich Co., St. Louis, MO, USA) for 30 minutes and then in 0.2% collagenase type Ⅱ (Sigma) for 1 hour. After that, the attached connective tissue and muscle were removed. The VBGP samples were then minced into small pieces and digested in 0.2% collagenase type Ⅱ for 5 hours. After removing tissue debris by a cribble, chondrocytes were collected in DMEM (Gibco BRL, Melbourne, Victoria, Australia) supplemented with 10% fetal bovine serum (Gibco) and incubated in humidified 5% CO2 atmosphere at 37 ℃. The medium was replaced every other day and the cells were subcultured by trypsinization with 0.25% trypsin when reaching a subconfluent state. The chondrocytes were identified by inverted phase contrast microscope. Chondrocytes were identified by inverted phase contrast microscope and staining with toluidine blue as previously described [24]. The first to third passage cells were used in the following studies [25].

Melatonin (Sigma) was dissolved in absolute ethanol (vehicle) according to the manufacturer's instructions. VBGP chondrocytes were seeded into 96-well culture plates at the rate of 1000 cells/well and were cultured with DMEM containing 10% FBS for 5 days. The medium was then replaced with serum-free DMEM containing various concentrations of melatonin (0.1, 1, 10 and 100 µg/mL), and the cells were incubated for 24 hours.

In order to further investigate the effect of melatonin on proliferation and differentiation of VBGP chondrocytes, luzindole (Sigma), a melatonin receptors antagonist, was also used in this study. Cells were pretreated for 60 minutes with luzindole at a concentration of 100 µg/mL before the melatonin treatment as previously described [26, 27].

The effect of melatonin on proliferation of VBGP chondrocytes was determined by Alamar Blue assay as previously described [28, 29]. Briefly, after cells were cultured with melatonin-containing medium for 24 hours, Alamar Blue (Invitrogen Co., Carlsbad, CA, USA) was added directly to the medium at 10% of the medium volume and was incubated in the incubator for 5 hours. Fluorescence intensity (excitation wavelength: 530 nm, emission wavelength: 590 nm) was measured using a SpectraMax M5 spectrophotometer (Molecular Devices Co., Sunnyvale, CA, USA).

Characterization of VBGP chondrocytes in vitro

Collagen type II and aggrecan are two typical markers of chondrogenic differentiation. There was no obvious difference in mRNA levels of the chondrogenic marker genes between control groups and melatonin-treated groups at melatonin dosages of 0.1 and 1µg/mL(P> 0.05), but the high concentration of melatonin (10 µg/mL and 100 µg/mL) was shown to down-regulate gene expression of collagen type II and aggrecan of rat VBGP chondrocytes (Fig.3A). However, this inhibited effect was reversed with luzindole treatment at a concentration of 100 µg/mL (Fig.3B).

Effects of melatonin on the proliferation of the cultured VBGP chondrocytes. VBGP chondrocytes were incubated for 24 hours with medium containing melatonin at different concentration or vehicle (0.2% ethanol). Cell proliferation was evaluated using Alamar Blue assay. Date from three independent experiments are presented as mean ± SD. *P < 0.05 and #P < 0.01 vs the control (the 0 µg/ml melatonin group) (A). Cells were cultured for 24 hours in the presence or absence of melatonin combined with or without luzindole pretreatment at 100 µg/ml. The date showed that luzindole pretreatment could reverse the proliferation inhibition (B).

Effect of melatonin on the protein expression of PCNA, Sox9 and Smad4 in cultured VBGP chondrocytes. VBGP-chondrocytes were treated with melatonin at different concentrations for 24 hours. The effect of melatonin on PCNA, Sox9 and Smad4 expression were assessed by western blotting. Picture and data are representative of three independent experiments. All values are shown as mean ± SD. *P < 0.05 and #P < 0.01 vs the control (the 0 µg/ml melatonin group). 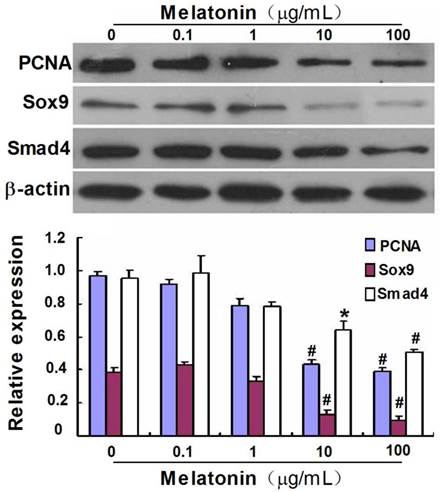 AIS is the single most common form of spinal deformity seen in orthopedic practice. Abnormal high growth indexes of the VBGP were well documented in AIS patients [6-9]. Because scoliosis developed in pinealectomized chickens, melatonin deficiency has been implicated as a possible cause for scoliosis [13-17]. In our study, the existence of melatonin receptors were demonstrated in the rat VBGP chondrocytes, which reveals that VBGP chondrocytes may be the target cells of melatonin. Therefore, there is an urgent need to understand the effects of melatonin on the proliferation and differentiation of VBGP chondrocytes.

Melatonin deficiency secondary to pinealectomy experimentally induced scoliosis in bipedal animal models, which has similar anatomical features to those of human idiopathic scoliosis [13-17, 41]. However, the published clinical data has addressed the controversy over the role of melatonin deficiency in AIS [16, 42-45]. Serum melatonin concentrations vary considerably according to age: infants younger than 3 months of age secrete very little melatonin, the secretion of melatonin peaks from age 1 to 3 (325 pg/mL) and then declines gradually with age (10 to 60 pg/ mL for adults) [46]. Relative anterior spinal overgrowth in AIS is believed to be a contributing cause of the lordosis and the hypokyphosis [5]. Our results cannot clearly elucidate whether melatonin deficiency is involved into the anterior spinal overgrowth. Uncertainties still surround the role of melatonin at lower concentration on VBGP chondrocytes and future research is needed.

In conclusion, the present study demonstrates for the first time that that melatonin at high doses can inhibit the proliferation and differentiation of VBGP chondrocytes in vitro. These findings give some new insight into the pathogenic mechanism of the AIS.

13. Bagnall K, Raso J, Moreau M. et al. The development of scoliosis following pinealectomy in young chickens is not the result of an artifact of the surgical procedure. Stud Health Technol Inform. 2002;88:3-9

42. Hilibrand AS, Blakemore LC, Loder RT. et al. The role of melatonin in the pathogenesis of adolescent idiopathic scoliosis. Spine. 1996;21:1140-6