Background: The Nemo-like kinase (NLK) is a serine/threonine-protein kinase that involved in a number of signaling pathways regulating cell fate. Variation of NLK has been shown to be associated with the risk of cancer. However, the function of NLK in oral adenosquamous carcinoma cells line CAL-27 is unknown.

Results: After NLK silencing, the number of colonies was significantly reduced (54±5 colonies/well compared with 262±18 colonies/well in non-infected or 226±4 colonies/well in negative control group (sequence not related to NLK sequence with mismatched bases). Using crystal violet staining, we also found that the cell number per colony was dramatically reduced. The RNA silencing of NLK blocks the G0/G1 phase to S phase progression during the cell cycle.

Conclusions: These results suggest that NLK silencing by lentivirus-mediated RNA interference would be a potential therapeutic method to control oral squamous carcinoma growth.

Oral squamous cell carcinoma is one of the most common malignancies worldwide. This tumor can be difficult to manage by surgery excision or chemotherapy (1). However, the gene therapy methods, which have been approved for evaluation in clinical trials, might be potentially used in the future (2, 3). Recent studies have revealed that many molecules are deeply involved in the oral squamous cell carcinoma formation and metastasis (4-7), which provide the genetic therapeutic targets for treatment of this kind of cancer.

Nemo-like kinase (NLK) is an evolutionarily conserved serine/threonine protein kinase (8-11). Evidence shows that NLK is involved in a number of important signaling pathways and regulates many transcription factors important for cell fate. NLK is able to play a role in multiple processes due to its capacity to regulate a diverse array of signaling pathways, including the Wnt/β-catenin, Activin, IL-6, adenomatous polyposis coli gene product (APC) and Notch signaling pathways (12).

In this study, targeted disruption of NLK was performed using lentivirus-mediated siRNA method (2,3). The effect of siRNA method on the proliferation and colony formation ability of CAL-27, an oral squamous cell carcinoma cells, was evaluated. Furthermore, the effect of NLK silencing on CAL-27 cell cycles was also studied.

The negative control sequence was 5'-TTCTCCGAACGTGTCACGT-3'.

Lentiviral particles were produced by cotransfecting 5×106 HEK293T cells in a 10 cm diameter tissue culture dishes with a combination of LV-shNLK (or LV-shCon ) vector, pVSVG-I, pRSV-Rev and pCMV delta R8.92 plasmids. Plasmid DNA transfection is carried out using lipofectamine TM 2000 (Invitrogen, Carlsbad, CA), according to the manufacturer's instructions. At 48 and 72 hours post transfection, the cell culture media is collected and filtered, through a 0.45-micron cellulose acetate filter. The viral vector supernatant is then concentrated by ultracentrifugation, and viral vector pellet is resuspended in a minimum volume of PBS containing 1% BSA. Before lentivirus was used for subsequent experiments, virus titer was determined and calibrated. For target cell infection, CAL 27 cells were grown to 70-80% confluence and infected with Lentivirus/shRNA-NLK or Letivirus/shRNA-Control at MOI of 10 in the presence of 6ug/ml polybrene (Sigma). The infection efficiency was observed by measuring the cells expressing GFP protein using fluorescence microscopy (IX71, Olympus) after 72 hours infection.

The thermal cycling conditions for the real-time PCR was 95 ℃ for 30 s followed by 40 cycles of 95 ℃ for 5s, 60 ℃ for 30 s. Data were collected during the 60 ℃. Relative expression levels for each primer set were normalized to the expression of GAPDH by the 2-△CT method.

Lentivirus infected CAL-27 cells were suspended and seeded in 96-well plate at an initial concentration of 2000 cells/well. After 20 µl 5 mg/ml 3-(4,5-Dimethylthiazol-2-yl)-2,5-Diphenyltetrazolium Bromide (MTT) was added into each well for 3 hours, acidified isopropanol (in 0.01 M HCl) was added into each well. Then the formazan precipitate was dissolved and plates were then read on the spectrophotometer at a wavelength of 595 nm.

Lentivirus infected CAL-27 cells were suspended and added in 6-well plate at an initial concentration of 200 cells/well. Cells were cultured in the 5% CO2 incubator at the 37℃ until the most single colony contains more than 50 cells. After samples were fixed and crystal violet staining was performed according to the instruction. The images were then captured. All studies were performed at least three times.

PASW Statistics 18, Prism 4 for windows v 4.00 and InStat 3.00 software were used for data analysis. Numerical data were analyzed by one-way ANOVA. Data are represented as mean and standard error. Turkey's test was used for multiple comparisons between four different groups and two-difference time course. The statistical significance was accepted as p < 0.05.

To investigate the function of NLK in oral squamous carcinoma cells, experiment to knockdown the endogenous NLK was performed. Specific shRNA against NLK was designed and cloned into the lentivirus vector (Lv-shNLK). Lentivirus expressing control shRNA (Lv-shCon) was used as negative control. As shown in Figure 1A, the infection rate was more than 90% as assessed by GFP fluorescence. RT-PCR and western blot were then performed to measure the expression level of NLK. It shows that after Lv-shNLK infection, the mRNA level was reduced about 40% compared with the non-infected or Lv-shCon infected group (Figure 1B). The endogenous protein level was also dramatically reduced after Lv-shNLK infection (Figure 1C). These results suggest that the antivirus mediated shRNA transaction could significantly suppress the expression of endogenous NLK.

To investigate the effects of NLK knockdown in oral squamous carcinoma cells, MTT and colony formation assay were carried out after lentivirus infection. As shown in Figure 2A, Lv-shNLK infection could significantly suppress the proliferation ability of CAL-27 cells compared with non-infected or Lv-shCon infected group. Tumorigenesis of CAL-27 was then evaluated by colony formation assay. It shows that after NLK silencing by Lv-shNLK infection, the number of colonies was significantly reduced (54±5 colonies/well compared with 262±18 colonies/well in non-infected or 226±4 colonies/well in Lv-shCon infected group) (Figure 2B & 2C). Using crystal violet staining, we also found that the cell number per colony was dramatically reduced (Figure 2B). These evidences implicate that target disruption of NLK in oral adenosquamous carcinoma cells could significantly inhibit their ability of proliferation and tumorigenesis.

To investigate the mechanisms of NLK silencing induced proliferation and tumorigenesis inhibition, flow cytometry was carried out to identify the specific phases of the cell cycle. As shown in Figure 3, 60.67 ± 0.25% cells were at G0/G1 phase of cell cycle in the Lv-shNLK infected group, which is significantly higher than that of non-infected group (55.63±0.40%) and Lv-shCon infected group (53.80 ± 0.89%). 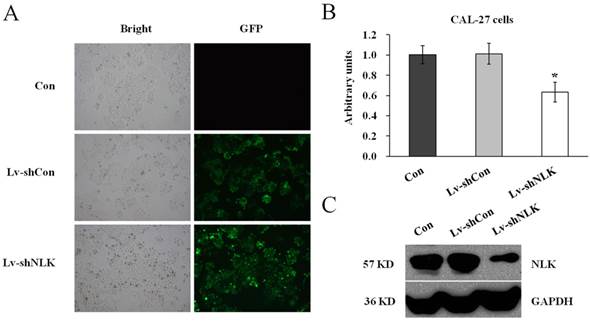 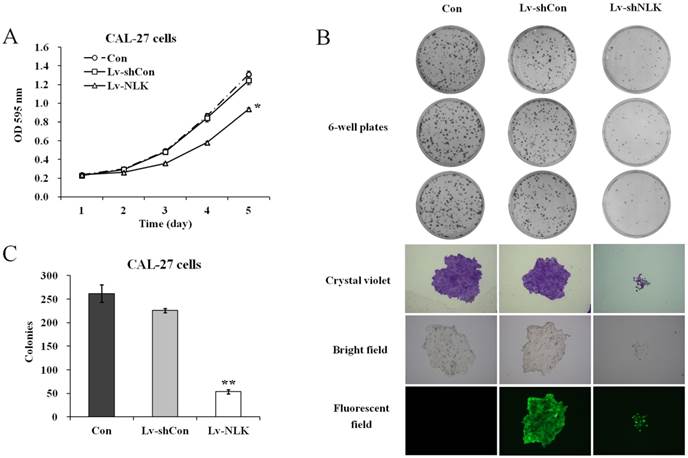 Statistic results of flow cytometry analysis of non-infected and Lv-shNLK or Lv-shCon infected CAL-27 cells. Cell cycle distributions as measured by flow cytometry. NLK silencing induces G0/G1 cell cycle arrest in CAL-27 cells. The cells at G0/G1 phase of cell cycle in the Lv-shNLK infected group is significantly higher than that of control group*, P<0.05 versus control or P<0.01 versus LV-shCon. 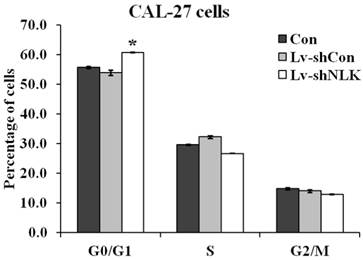 The main cause of death in oral squamous cell carcinomas is metastasis (5). Intercellular adhesion is mediated by a family of glycoproteins called cadherins and other molecules like catenins and APC (adenomatous polyposis coli gene product). Other recent reports have revealed that many molecules are involved in the oral squamous cell carcinoma formation and metastasis (5, 6). It has been shown that the Wnt signaling pathway and adenomatous polyposis coli gene product (APC) is involved in the oral squamous cell carcinoma, as a strong neurotropic malignancy (5, 18). Compare our experiments with these reports, the novelty and importance of our results is NLK was found to be involved in the oral squamous cell carcinoma. We know that, NLK is able to play a role to regulate a diverse array of signaling pathways, including the Wnt/β-catenin, Activin, IL-6, adenomatous polyposis coli gene product (APC) and Notch signaling pathways (12). It is interested to find the link between NLK and Wnt in oral squamous cell carcinoma. Further examination is necessary. The Wnt signal stabilizes beta-catenin protein and promotes its accumulation in the cytoplasm and nucleus. In the nucleus, beta-catenin associates with T-cell factor (TCF) to form a functional transcription factor, which mediates the transactivation of target genes involved in the promotion of tumor progression, invasion, and metastasis, such as C-Myc, cyclin Dl, c-jun, fra-l, and u-PAR. There is a strong correlation between the ability of the Wnt gene to induce beta-catenin accumulation and its transforming potential in vivo, suggesting that the Wnt gene activates an intracellular signaling pathway that can induce the morphological transformation of cells (18) . In the presence of NLK, the complex of Wnt is able to promote the transcription of other genes involved in oral carcinoma proliferation or apoptosis inhibition.

Targeted silencing of the endogenous NLK in CAL-27 cells could suppress the ability of proliferation and tumorigenesis, implicated that NLK might be a therapeutic target for the genetic treatment of oral squamous cell carcinoma. NLK, an evolutionarily conserved MAP kinase-like kinase, could regulate a number of signaling pathways important for cell fate determination via its kinase activity. More and more evidences support that NLK is involved in different forms of cancer. However, the expression level and nucleofection experiments targeting NLK in different carcinoma cells are controversial. In the prostate cancer cells, the expression of NLK is downregulated (15). Overexpression NLK in this kind of carcinoma could suppress cell growth and promote apoptosis in colon and prostate carcinoma cells (15). However, in the hepatocellular carcinoma cells, NLK is found to be aberrantly upregulated and targeted disruption of NLK could inhibit the proliferation of this kind of carcinoma (14). These data suggest that proper level of NLK in the cell is very important. Aberrantly increase or decrease the expression of NLK might lead to the formation of cancer. Consistent with the results from hepatocellular and gallbladder carcinoma cells (14, 17), we found that NLK silencing in oral squamous carcinoma cells, could reduce their ability of proliferation and colony formation, implicating that NLK might be abnormally upregulated in the oral squamous carcinoma cells.

Moreover, to investigate the mechanisms of NLK silencing induced cell proliferation inhibition, we evaluated the specific phases of cell cycle after lentivirus infection. We found that NLK silencing could block the progression from the G0/G1 phase to the S phase during the cell cycle. These results suggest that signaling molecules involved in the cell cycle regulation might be modulated by NLK in oral squamous carcinoma cells.

To conclude, we found that endogenous NLK regulated oral adenosquamous carcinoma cells proliferation and colony formation. These results suggest that lentivirus-based NLK silencing is a promising gene-therapeutic method for the treatment of oral squamous cell carcinoma.

The National Natural Science Foundation of China funded project is acknowledged for the financial support for this work (81272958).

1. Binmadi NO, Basile JR. Perineural invasion in oral squamous cell carcinoma: a discussion of significance and review of the literature. Oral Oncol. 2011;47:1005-10