Ameloblastoma is one of the most common tumors from odontogenic epithelium. Although clinically classified as benign, ameloblastoma has a high risk of recurrence because it is locally invasive making it an important neoplasm in the field of Oral Surgery (1). Several histopathological variants and cell differentiation in the same tumor may be observed. Thus, investigation on the differentiation of tumor cells is an important research aspect for its therapeutic management.

Heat shock proteins (HSPs) which are widely distributed in cells were found to be essential in a variety of functions like maintenance of state of homeostasis, cell differentiation, proliferation, survival, etc. (2, 3). Search of literatures revealed no other studies on HSPs in ameloblastoma with exception of two studies (4,5). The one revealed that HSP27 localized in human tooth germ is essential in cell growth. Moreover, the expression of HSP27 in ameloblastoma suggested its essential role in tumor development (4). The later, the localization and differential expressions of HSP27 and phosphorylated HSP27 (pHSP27) in histopathological subtypes of ameloblastoma were investigated suggesting the role of HSP27 in the differentiation of tumor cells (5). However, since the results were based on a limited number of specimens, new a large number of cases were added to previous cases stained with HSP27/pHSP27. Immunohistochemistry (IHC) of cytokeratins (CKs) was also carried out for further inquest. In this study, cell morphology as well as cell differentiation in the tumor nests were analyzed.

IHC positive reaction was determined without considering the intensity (lightly-stained cells were also counted). The cells were identified and classified as columnar basal cells, cuboidal basal cells, cells which formed squamous metaplasia, stellate reticulum cells and fibroblasts in the stroma. Positive-cell count was determined in the 40 high-power field. Positive sndex was defined as the ratio of positive cells to total cells.

The present study was approved by the Ethics Committee Review of School of Dentistry Aichi Gakuin University (No. 179; Date: May 29, 2009).

The cases examined consisted mostly of follicular type although plexiform type was also observed. Large numbers of varied size islands of tumor nests embedded in fibrous stromal tissues were observed. The follicular type composed of cuboidal or columnar cell layers, which nuclei comparatively strong stained with hematoxylin, surrounded by a fibrous stroma. Inside the tumor nests, squamous metaplasia and cystic degeneration were noted. The plexiform type consists of cuboidal cells having reticular or trabecular growth.

In plexiform type, although the cells were weakly stained, almost all cells showed positive reaction (Fig. 1 A). The central part of the tumor nest in follicular type showed positive reaction to HSP27 particularly the sites with squamous metaplasia which was strongly reflected in the marginal cells of the parenchyma (Fig. 1 B). However, the peripheral cuboidal and/or columnar cells forming the tumor parenchyma were mostly negative.

IHC of pHSP27 revealed similar results with HSP27. The central part of tumor nest in follicular type showed strong positive reaction particularly the sites with squamous metaplasia (Fig. 1 C), as well as those with cystic degeneration lining the parenchyma (Fig. 1 D). On the other hand, the peripheral columnar and/or cuboidal cells were mostly negative. In plexiform type, tumor cells making up the parenchyma were strongly positive (Fig. 1E, F). HSP27 and pHSP27 expressions were observed in the same sites although the intensity of pHSP27 was stronger. Some fibroblasts and vascular endothelial cells in the stroma were slightly stained showing no difference between the 2 histological types. 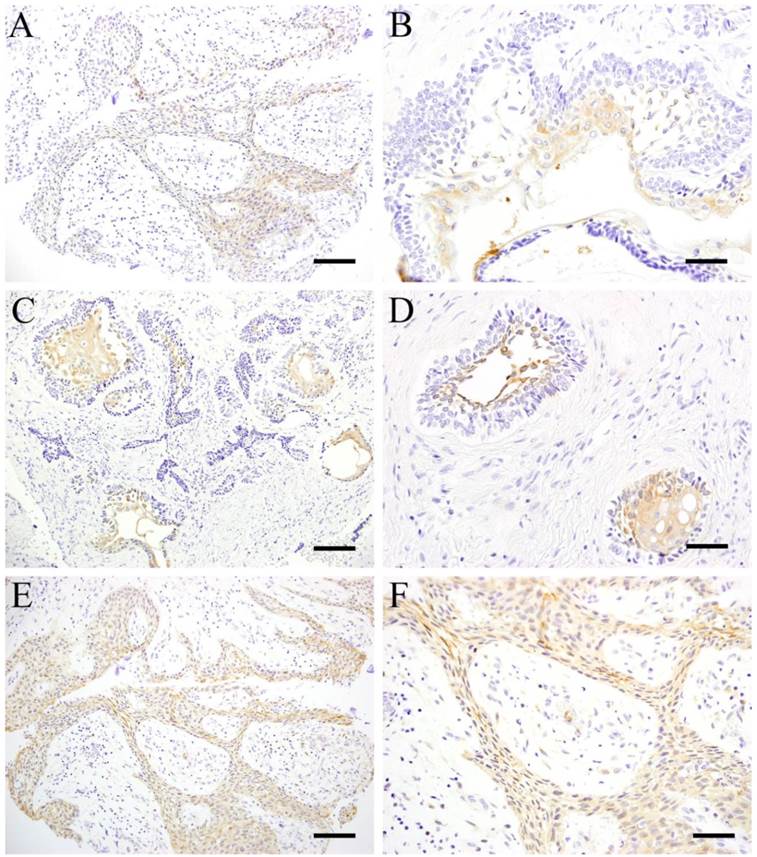 Table 2 shows the quantitative results of IHC. No significant difference was obtained in the number of cells stained with HSP27 and pHSP27. However, more cells strongly expressed pHSP27 compared to HSP27 especially in the area of squamous metaplasia in follicular type. Moreover, almost all stellate reticulum cells in the center of parenchyma expressed HSP27 with a positive rate of 89.3% compared to the 69.4% positive rate obtained in pHSP27. Nevertheless, the positive rate of columnar cells was 3.8% in HSP and 3.2% in pHSP27 showed no significant difference. The positive rate in cuboidal cells in HSP27 and pHSP27 showed almost the same scores having 4.3% and 4.6% respectively. In the follicular type, the average positive rate of fibroblasts and vascular endothelial cells that make up the stromal cells were 3.3% in HSP27 and 1.0% in pHSP27. In plexiform type, cuboidal cells showed 86.1% positive rate for HSP27 and 78.6% for pHSP27. Positive reaction rates in fibroblasts and vascular endothelial cells were comparable in follicular type (Table 2).

Double immunofluorescent staining revealed in follicular type, both pHSP27 (Fig. 3 A) and CK13 (Fig. 3 B) were detected in tumor cells and in the central part of the parenchyma with almost merging (Fig. 3 C) of the stains. In plexiform type, only cuboidal cells showed positive reaction to pHSP27 but negative to CK13. On the other hand, immunofluorescent staining of pHSP27 and CK8 showed that in follilcular type, strong positive reaction to pHSP27 in the center of the parenchyma with squamous metaplasia but almost negative reaction to CK8. However, in plexiform type, cuboidal cells expressed both pHSP27 (Fig. 3 D) and CK8 (Fig. 3 E) with a merging (Fig. 3 F) of the positive reaction.

As the major protein expressed by various tissues and organs due to mechanical stimulation and stress cytotoxicity, HSPs are known to increase temporarily by heat shock (15). HSP is not only caused by heat shock but its expression is also caused by various stresses like pathological changes, radiation, enzyme, heavy metals, arsenic, ethanol, amino acid derivatives, etc (16). Furthermore, it is seen in damaged cells involved in repair and defense and functions in maintaining cellular homeostasis (17). HSPs are classified according to structure and molecular weight. HSP27 is classified as a low molecular weight protein involved in cell growth and differentiation as a molecular chaperone (18, 19). Many HSPs are known to be expressed in response to stress, suppression of denaturation of proteins and repair of denatured proteins. In addition, HSPs were recently implicated in a variety of cell differentiation (20). 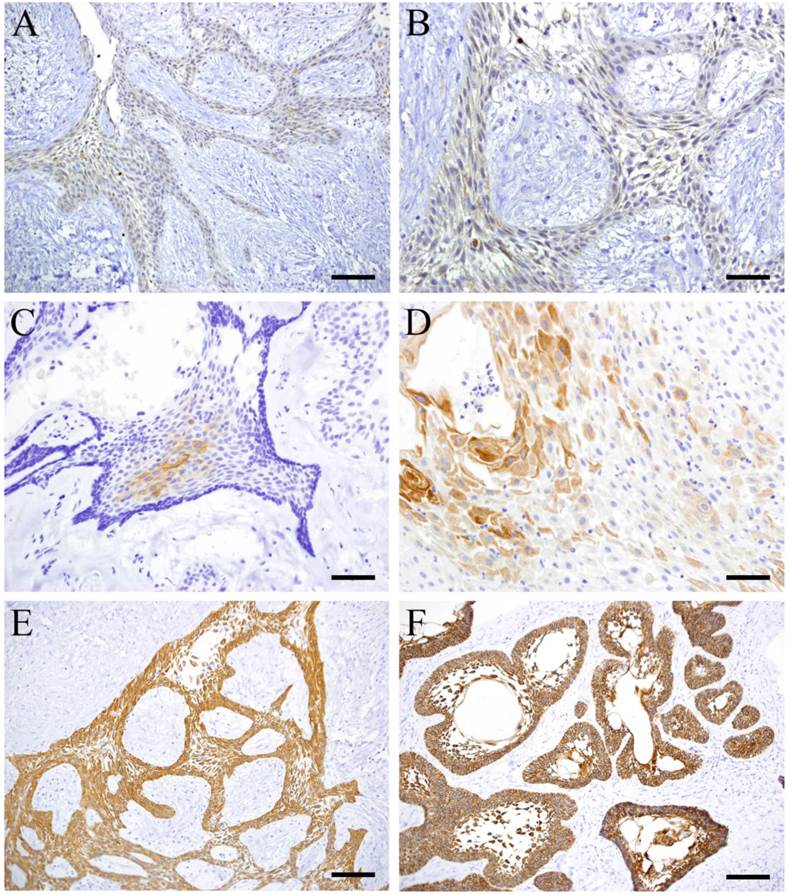 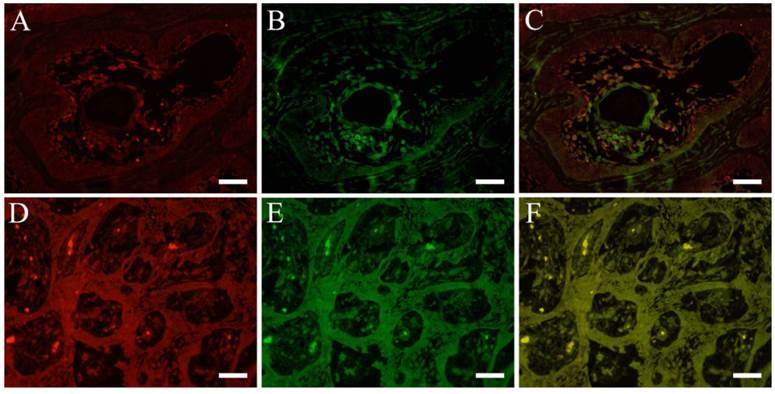 The relevance of HSP27 in ameloblastoma was investigated in this study. HSP27 is present as a polymer (if not stimulated) but is phosphorylated in response to stress or other factors and is capable of varying the dimer of a polymer. The activity of HSP27 can be regulated by post-transcriptional modification such as phosphorylation. Serine (Ser) residues in human HSP27 were reported to be phosphorylated in three sites such as Ser-15, Ser-78 and Ser-82 (21) which can play a role in the change from HSP27 to pHSP27. In this regard, we decided to examine both HSP27 and pHSP27 to observe the difference in the expression and localization in ameloblastomas. The expression of HSP27, 60 and 70 in ameloblastomas were examined by IHC (4). The results showed that HSP27 was detected in odontogenic epithelial cells in tooth germ and in benign and malignant ameloblastoma. It was also widely detected in dental lamina and enamel organ in tooth germ and slightly detected in dental papilla and mesenchymal cells in dental follicle. Moreover, HSP27 was expressed by both tumor cells in benign and malignant ameloblastoma in a wide range but weakly expressed by fibroblasts and endothelial cells in the stroma. The results of this study are similar to those reported in the literature (4) where in HSP27 was strongly expressed by tumor cells in ameloblastoma but not by fibroblasts and vascular endothelial cells in the stroma. In the literatures, Notch was expressed by fibroblasts in the stroma of ameloblastoma but HSP27 in our examination was hardly detected (6). Therefore, it would show that Notch and HSP27 are not working strongly in those regions. However, because there were no detections of specifically mentioned the type of cell, a positive reaction status for each cell type was assumed (4).

In order to examine the relevance of HSP in cell differentiation, we focused on the cytoskeletal expression using some CKs. CK19 is a marker of typical odontogenic epithelium widely observed in follicular and plexiform types of ameloblastoma (22-26). Since staining with CK14 is one of the measures of the differentiation potential of squamous cells and is extensively expressed in follicular and plexiform types, it implies that squamous differentiation of each type can occur. This is consistent with the HE findings in our specimens. Moreover, CK13 was expressed mostly by squamous-like cells in the tumor parenchyma obviously undergoing squamous metaplasia. CK8 was strongly detected in tumor nests in plexiform type but weakly detected in follicular type. These results suggest that the positive reaction appear in comparatively un-developed cells of plexiform type. These cells have a possibility of differentiation in neoplastic cell nests. It was considered that the expression of HSP27 in plexiform type correlated with the expression of CK8 suggesting that HSP27 may have regulated the expression of CK8. Double immunfluorescence revealed weak reaction to pHSP27 and CK13 in cuboidal cells and tall columnar cells in the parenchyma of follicular type ameloblastoma. On the other hand, intense epHSP27 and CK13 expressions in stellate-shaped cells and in squamous metaplasia were observed. Squamous-shaped cells that form the tumor parenchyma of plexiform type were entirely and uniformly stained with pHSP27. There was no difference in the localization and rate of expression between HSP27 and pHSP27 although HSP27 was stronger in some cells. Results showed high positive reaction rate in stellate-shaped cells and those cells undergoing squamous metaplasia in the parenchyma of follicular type. Tumor cells in ameloblastoma have short life span resulting to cells mostly having squamous characteristics in primary cultures collected from the lesion (22). It is believed that injury to the tumor cells occurred during tissue collection resulting to the activation of HSPs. It is suggested that HSPs are involved in the differentiation of the columnar and cuboidal tumor cells to squamous cell in tissue cultures of ameloblastoma. Development in the technology in cultivating tumor cells in ameloblastoma occurred recently as well as research in cell differentiation in ameloblastoma (22). It is considered that HSP27 and pHSP27 were involved in the transformation of tumor cells to squamous metaplasia. Since findings of the study were similar to IHC expression pattern of Notch by Muraki et al, it is suggested that HSP27 was strongly involved in cell differentiation such as the formation of squamous metaplasia in follicular nests. Since HSP27 expression was similar to CK13, it can be inferred that both molecules are involved in cell differentiation. The relative expression of HSP27 and pHSP27 in plexiform type suggests that the molecules may be involved in the determination of histopathological type.

This study was supported in part by a Grant-in Aid for Scientific Research (C) (#, 23592951) from the Japan Society for the Promotion of Science.

24. Lentini M, Simone A, Carrozza G. Peripheral ameloblastoma: use of cytokeratin 19 and Ber-EP4 to distinguish it from basal cell carcinoma. Oral Oncology Ex. 2004;40:79-80