Objective: Dracorhodin perchlorate (DP) was a synthetic analogue of the antimicrobial anthocyanin red pigment dracorhodin. It was reported that DP could induce apoptosis in human prostate cancer, human gastric tumor cells and human melanoma, but the cytotoxic effect of DP on human breast cancer was not investigated. This study would investigate whether DP was a candidate chemical of anti-human breast cancer.

Results: DP dose and time-dependently inhibited the growth of MCF-7 cells. DP inhibited MCF-7 cell growth through apoptosis. DP regulated the expression of Bcl-2 and Bax, which were mitochondrial pathway proteins, to decrease MMP, and DP promoted the transcription of Bax and inhibited Bcl-2. Apoptosis-inducing factor (AIF) and cytochrome c which localized in mitochondrial in physiological condition were released into cytoplasm when MMP was decreased. DP activated caspase-9, which was the downstream of mitochondrial pathway. Therefore DP decreased MMP to release AIF and cytochrome c into cytoplasm, further activating caspase 9, lastly led to apoptosis.

Dracorhodin perchlorate (DP, Fig. 1A) was a synthetic analogue of the antimicrobial anthocyanin red pigment dracorhodin (Fig. 1B), which was isolated in the exudates of the fruit of Daemonorops draco [1-3] in traditional Chinese medicine named as “dragon's blood”. It had been previously proved that loureirin B, one of extracted compounds from Daemonorops draco, could modulate sodium currents and exert biological activity [4]. Therefore the evaluation of the biological effects of other active compounds from Daemonorops draco could be helpful for new drug development. In 2012, Rasul A et al. [5] found that DP inhibits PI3K/Akt and NF-κB activation, up-regulates the expression of p53. And He et al. [6] also reported that DP suppressed proliferation and induced apoptosis in human prostate cancer cells. Other studies have shown that DPinhibited cell growth and triggered apoptosis in melanoma and leukemic cancer cells [7, 8], but the effect of anti-human breast cancer MCF-7 cells of DP was not investigated. MCF-7 cells was one kind of cell which did not express caspase-3 due to the functional 47-bp deletion inside the exon 3 of the CASP-3 gene, but remained the activity of caspase8, caspase9 and caspase 7 [9-12]. Actually when caspase-3 had no contribution to cell death, cells could still die apoptotically by non-caspase-3-dependent or caspase-independent mechanisms [13-15]. This study aimed to investigate the inhibitory role of DP on MCF-7 cells and the molecular mechanism of DP-induced apoptosis in caspase 3-deficient MCF-7 cells.

Apoptosis, the process of programmed cell death (PCD), had many kinds of apoptotic mechanism. One was Fas death receptor pathway was involved in the activation of caspase-8 and caspase-10 [16, 17]. Another important one was mitochondrial pathway [18]. Once cytochrome c was released, it would bind with apoptotic protease activating factor - 1 (Apaf-1) and ATP, which then bind to pro-caspase-9 to create a protein complex known as an apoptosome. Mitochondrial outer membrane permeabilization pore was regulated by various proteins, such as Bcl-2 and Bax of mammalian Bcl-2 family [19, 20]. Finally, caspase-8 and caspase-9 would activate caspase-3 to induce apoptosis. Because MCF-7 cells did not express caspase-3 [9], therefore we observed the release of apoptotic factor, apoptosis-inducing factor (AIF) which belonged to caspase-independent pathway, from mitochondria. AIF was a protein that could trigger chromatin condensation and DNA degradation in a cell in order to induce programmed cell death, likely caspase 3 which could condense chromatin and fragmented DNA [21-23].

The goal of this study was to identify a novel anti-human breast cancer agent and the role of mitochondrial pathway in DP-treated MCF-7 cells.

The inhibition of cell growth was determined by a MTT test. The MCF-7 cells (1.5×104 cells/well) were seeded into 96-well culture plates (Nunc, Roskilde, Denmark). After overnight incubation, various concentrations of DP were added to the plates. MCF-7 cells were treated with 60 μmol/L DP for 24 h, and/or 20 μmol/L caspase 9 inhibitor, and following incubation, cell growth was measured at different time points by the addition of MTT at 37 °C for 3 h; DMSO (150 μL) was added to dissolve the formazan crystals. Absorbance was measured at 492 nm with an ELISA plate reader (Bio-Rad, Hercules, CA, USA). The percentage of inhibition was calculated as follows:

The MCF-7 cells were treated with 60 μmol/L DP for 24 h, and/or 20 μmol/L caspase 9 inhibitor, the morphological changes were observed by phase contrast microscopy (Leica, Nusslich, Germany).

The MCF-7 cells, which were incubated in RPMI-1640 containing 10% fetal calf serum, were seeded into 6-well plates (Nunc, Denmark) with coverslips and cultured overnight. The cells were treated with 0 and 60 µmol/L DP 24 h. The morphological changes of the nuclei were observed by Hoechst 33258 staining. The cells on the coverslips were rinsed and stained with Hoechst (10 mg/L) at 37 °C for 30 min. After the coverslips were sealed, the samples were observed by fluorescence microscopy (Leica, Germany).

Washed cells twice with cold PBS and then resuspended cells in 1X Binding Buffer at a concentration of 1 x 106 cells/ml. After that transferred 100 µl of the solution (1 x 105 cells) to a 5 ml culture tube. And added 5 µl of FITC Annexin V and 5 µl PI. Gently vortexed the cells and incubated for 15 min at RT (25°C) in the dark. And added 400 µl of 1X Binding Buffer to each tube. Finally analyzed by flow cytometry within 1 h.

The MCF-7 cells were treated with 60 µmol/L DP for the indicated times. Both adherent and floating cells were collected and frozen at -80 °C. A Western blot analysis was performed for the total proteins as follows. Briefly, the cell pellets were resuspended in lysis buffer, including 50 mmol/L HEPES (pH 7.4), 1% Triton-X 100, 2 mmol/L sodium orthovanadate, 100 mmol/L sodium fluoride, 1 mmol/L EDTA, 1 mmol/L egtazic acid (EGTA), 1 mmol/L phenylmethylsulfonyl fluoride (PMSF), 0.1 g/L aprotinin, and 0.01 g/L leupeptin, then lysed at 4 °C for 1 h. After 13 000×g centrifugation for 10 min, the protein content of the supernatant was determined using Bio-Rad protein assay reagent (Bio-Rad, USA). The protein was loaded in each lane, then separated by 12% SDS-PAGE, and blotted onto a nitrocellulose membrane. The protein expression was detected using primary polyclonal antibody (1:200-1000) and secondary polyclonal antibody (1:500) conjugated with peroxidase.

All data represent at least 3 independent experiments and are expressed as mean±S.D. Statistical comparisons were made using Student's t-test. P-values of less than 0.05 represented a statistically significant difference.

DP was a synthetic analogue of the antimicrobial anthocyanin red pigment dracorhodin (Fig. 1A), which was isolated in the exudates of the fruit of Daemonorops draco. To detect the growth inhibition of DP-exposed MCF-7cells, the cells were treated with various doses of DP, ranging from 40 to 150 µmol/L for12, 24, 36, 48 h. DP showed potent suppressive effect on the MCF-7 cells, and the IC50 values were 57 µmol/L at 24 h (Figure 1B). Therefore in the following experiments, we adopted the condition 60 µmol/L at 24 h. 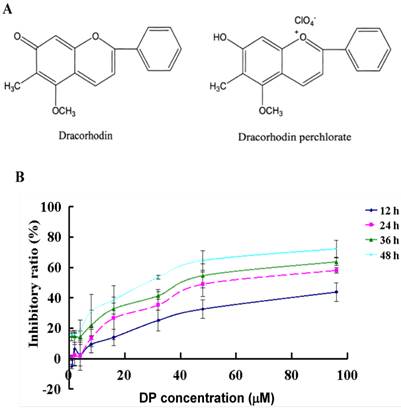 To further investigate the role of MMP in DP-treated MCF-7 cell, a flow cytometric analysis was performed. After 60 µmol/L DP treatment for 24 h, MMP was decreased from 91.98% to 24.26% compared with the control group (Figure 3A), so decreased MMP by DP was one of mechanism of apoptosis. 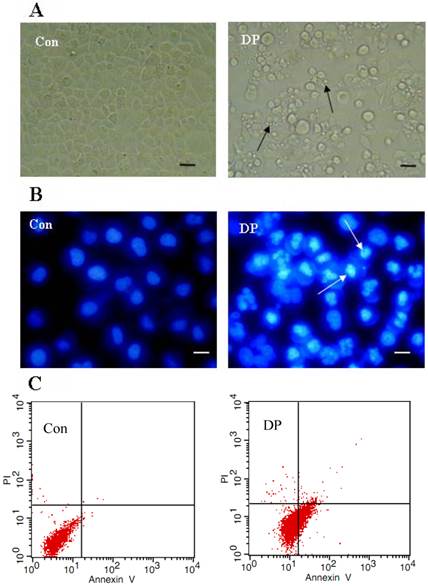 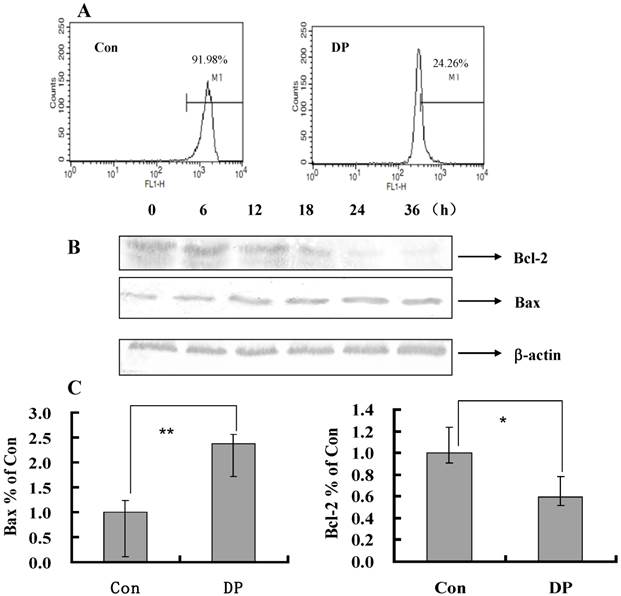 Caspase-9 was activated by DP in MCF-7 cell

Caspase-9 inhibitor decreased the inhibitory effect of DP in MTT analysis (Figure 4A). From morphologic analysis, it was also proved that caspase-9 inhibitor inhibited the apoptosis induced by DP (Figure 4B). At different time point, the expression of procaspase-9 was decreased, and caspase-9 was increased (Figure 4C). In our study, caspase -9 was activated by DP time-dependently. But DP did not affect mRNA level of caspase-9(Figure 4D).

Cytochrome c and AIF were released into cytoplasm after 12 h of DP treatment (Figure 5).

Breast cancer was a type of cancer originating from breast tissue, most commonly from the inner lining of milk ducts or the lobules that supplied the ducts with milk [24]. Treatments might include surgery, drugs (hormonal therapy and chemotherapy), radiation and/or immunotherapy [25]. But there was no effective drug for therapy and prognosis after surgery. Therefore development of a new and low price drug, especially from traditional Chinese medicine, seems important and urgent, as also previously suggested [26-28]. In this study, we found that dracorhodin perchlorate (DP) dose and time-dependently inhibited MCF-7 cell growth, indicating that DP exerted cytotoxic effect on human breast cancer MCF-7 cell. After DP treatment, apoptotic bodies appeared, nuclei became condensed, and in Annexin V-PI staining single positive of Annexin V was increased, indicating that DP inhibited MCF-7 cell growth through apoptosis. Since cell growth inhibition may be due not only to apoptosis but also to cell proliferation arrest, future studies will be performed to explore also this issue. 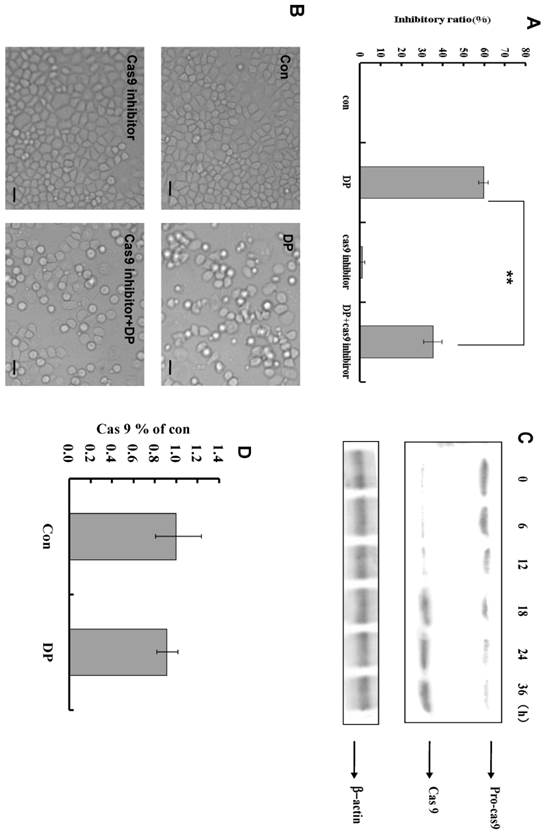 Dracorhodin perchlorate increased the level of cytochrome c and AIF in the cytoplasm.

AIF (apoptosis inducing factor) was a phylogenetically-conserved mitochondrial intermembrane flavoprotein that had the ability to induce apoptosis in a caspase-independent manner. Previous reports indicated that injection of the anti-AIF antibodies or knockout of the AIF gene might alleviate the progression of apoptosis, suggesting that AIF was required for cell death after certain cell stresses [21-23], therefore we investigated the role of AIF in apoptotic process of DP-treated MCF-7 cells. In this study, AIF was shown to translocate from mitochondria to the cytoplasm after DP treatment, implying apoptosis of MCF-7 cells was independent on caspase 3, but dependent on AIF. Meanwhile cytochrome c was also released into cytoplasm from mitochondria, and activation of caspase 9 was found after DP treatment Therefore DP released cytochrome c to promote the activation of caspase 9. Since cell growth inhibition may be due not only to apoptosis but also to cell proliferation arrest, future studies will be performed to explore also this issue

In conclusion our study strongly suggested a potential role of DP in human breast cancer treatment.

This work was supported by Administration of Traditional Chinese Medicine of Jilin Province (2012-030).

Dr Xiao-fang Yu was called back as experts of "Thousand Talents Program” by Organization Department of the CPC Central Committee in 2010, now is working as the director of the Institute of Virology and AIDS Research of Jilin University, who majors in the relationship between virus and host cell, and cancer research, he had published high level of paper in Nature, Science, and so on.

Dr Wen-yan Zhang majors in who majors in the relationship between virus and host cell, and cancer research, he had published high level of paper in Nature.