This comprehensive meta-analysis was applied to case-control studies of the association between pancreatitis and PRSS1 gene to assess the joint evidence for the association, the influence of individual studies, and evidence for publication bias. PubMed, EMBASE, and Cochrane Library were searched in order to identify longitudinal studies evaluating pancreatitis disease and PRSS1 gene. Odds ratios (ORs) were pooled using a random-effects model. For the case-control studies, the authors found 1) support for the association between total pancreatitis and PRSS1 gene, both totally analyzed and subdivided analyzed {total: [OR:10.799, 95%CI:(5.489-21.242), p<0.000]; Europe: [OR:9.795, 95%CI:(2.923-32.819), p<0.000]; Asia: [OR:11.994, 95%CI:(5.156-27.898), p<0.000]}. 2) no evidence showed that this association was accounted for by any one study, and 3) no evidence showed any publication bias exist. In conclusion, PRSS1 gene was significantly associated with total pancreatitis disease, both totally and separately.

Both AP and CP are complex diseases caused by a number of etiological factors [8, 9]. During the last several decades, more and more studies have indicated that genetic risk factors contribute to the pathogenesis of pancreatitis [10, 11]. Genetic studies have demonstrated that the p.N34S variant of secretory pancreatic trypsin inhibitor 1 (SPINK1) was associated with AP [12]. Other genes such as TNF-α and iNOS also have been indicated as candidate genes for AP by some groups, but results in different studies are inconsistent. A number of genetic risk factors were identified in CP. In particular, mutations of the cationic trypsinogen (PRSS1), chymotrypsinogen C (CTRC), the cystic fibrosis transmembrane conductance regulator (CFTR) an SPINK1, have been found to be associated with both the hereditary and the idiopathic form of CP [13-17].

PRSS1 locates in the short arm of chromosome 7 and encodes cationic trypsinogen, which is the most abundant isoform of trypsinogen in human pancreatic juice. In 1996, Whitcomb et al first demonstrated that mutations in PRSS1 gene were associated with hereditary pancreatitis [18]. Since then, numerous mutations in this gene have been identified in families with hereditary pancreatitis or sporadic cases [http://www.uni-leipzig.de/pancreasmutation/]. Several groups also found mutations in the patients with acute pancreatitis. All the studies indicated that mutations of PRSS1 are associated with acute and chronic pancreatitis. However, the published genetic association results are inconclusive [19-25]. This inconsistency may be due to inadequate statistical power, racial and ethnic differences, and publication bias. For all the reasons above, we conducted this comprehensive meta-analysis, which is a powerful tool for summarizing the results from different studies by producing a single estimate of the major effect with enhanced precision.

We have performed an exhaustive search for studies that examined the association of the PRSS1 mutations with pancreatitis. A search of the literature was made using Medline citations to identify available articles in which PRSS1 mutations were determined in pancreatitis patients and controls through May. 2012. References in the Medline-cited studies were reviewed to identify additional reports not indexed by Medline. The following key words and subject terms were searched: 'PRSS1', 'cationic trypsinogen', 'candidate gene', 'association study', 'polymorphism' and 'pancreatitis'. We have only used data from the full-published paper, not from any meeting or conference abstract.

All the included studies satisfied the following criteria: they (1) were association studies between the PRSS1 gene and pancreatitis (both AP and CP); (2) used disease-free people as controls; (3) were independent studies and the subject groups investigated did not overlap with each other; (4) were published in peer-reviewed journals and were indexed by PubMed or cited by articles indexed by PubMed. Authors were contacted where clarification was required.

The following information was independently extracted from the identified studies by two participants in the meta-analysis: first author, journal, year of publication, ethnicity of the study population, the number of cases and controls or OR, country in which the study was conducted and confirmation of diagnosis. The results were compared and any disagreement was discussed and resolved by consensus.

The effects model using the DerSimonian and Laird method was employed, and the estimate of heterogeneity was determined using the Mantel-Haenszel model. The effect size was represented by an odds ratio (OR) with 95% confidence interval (CI). Sensitivity analysis was conducted by removing each study and analyzing the others to ensure no single study was totally responsible for overall results. The significance level was set at 0.05, and all P values were two-tailed.

Seven references were included in this research [19-25]. Among them, studies in reference 21 and 22 analyzed PRSS1 mutations in both acute and chronic pancreatitis, others focused on the chronic pancreatitis. The total analysis showed that PRSS1 gene was significantly associated with total pancreatitis {OR: 10.799, 95%CI: (5.489-21.242), p<0.000} (Figure 1-A). According to the different races, the total group was subdivided into European subgroup and Asian subgroup. In the European subgroup, PRSS1 was still significantly associated with the disease (both AP and CP) {OR: 9.795, 95%CI: (2.923-32.819), p<0.000} (Figure 1-C). When analyzed the Asian subgroup, the results showed that this group people, the same as the European subgroup, was significantly associated with pancreatitis (both AP and CP) {OR: 11.994, 95%CI: (5.156-27.898), p<0.000} (Figure 1-B). The sensitivity analysis, both in the total group and the subdivided subgroups, showed that when any one study was removed, the results still showed significant (Figure 3-A,B,C). This indicated that no heterogeneity existed in the populations. The Egger's funnel plots of publication bias analysis was shown in Figure 2-A,B,C. 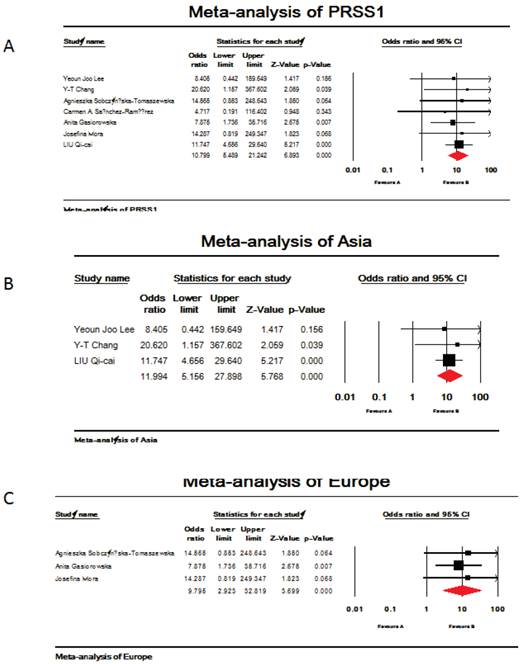 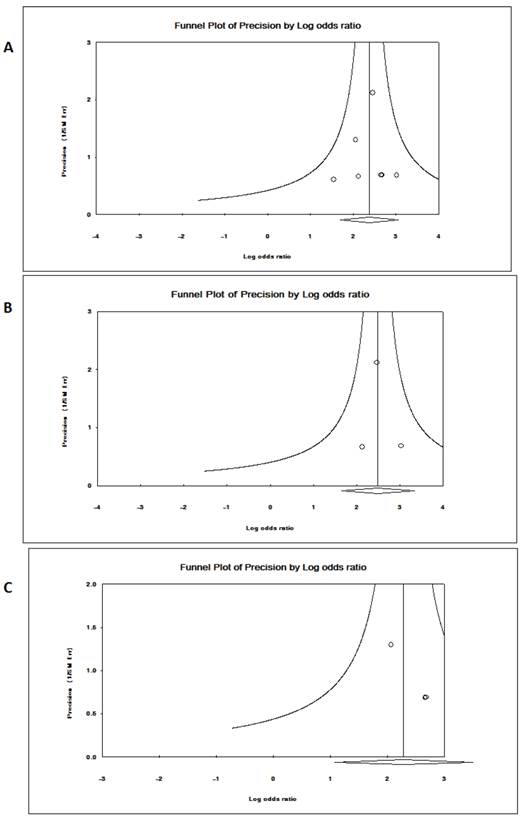 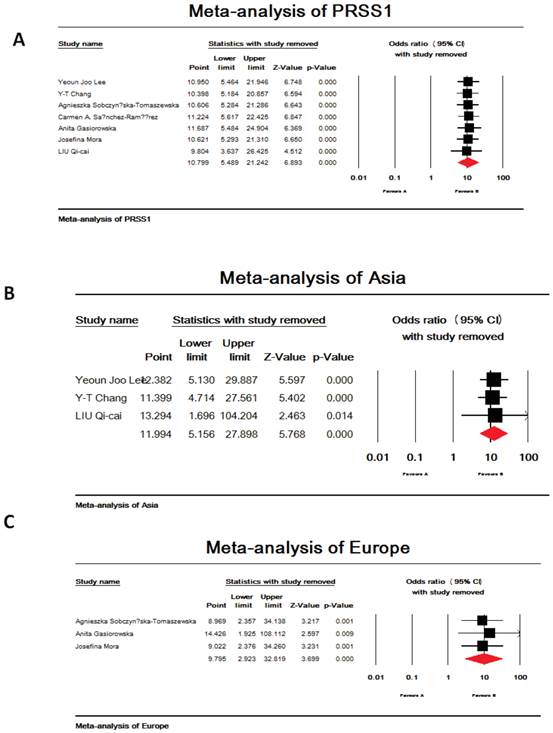 As heterogeneous diseases, pancreatitis could be triggered by a variety of factors. More than 80 percent of acute pancreatitis is caused by gallstones and alcohol abuse. Other causes include medications, infections, trauma, metabolic disorders, and surgery. In about 10% to 15% of people with acute pancreatitis, the cause is unknown. Prolonged alcohol use is the leading cause of chronic pancreatitis. Other causes include metabolic, anatomical, obstructive, and autoimmune etiological factors. However, the mechanisms responsible for the development of pancreatitis have not yet been fully elucidated. Over the past several decades, genetic studies have provided insight into components of the pathogenic mechanisms leading to acute or chronic pancreatitis, and have identified several firmly established susceptibility genes such as PRSS1, SPNIK1, CTRC and CFTR [26]. Among them, the PRSS1 gene, which located within 7q35, is the first gene found to be associated with hereditary pancreatitis. Patients suffering from CP caused by PRSS1 gene mutation have a significant life time risk for pancreatic cancer. This is the reason of genetic, clinical and imaging studies of these patients. So, it becomes more and more important to do more work on this subject. In order to explore the relationship between pancreatitis and PRSS1 gene, we conducted this comprehensive meta-analysis. The lack of concordance across many of single case-control studies reflects limitation in the studies, such as small sample sizes, ethnic difference and research methodology. Meta-analysis is a powerful tool for summarizing the results from different studies by producing a single estimate of the major effect with enhanced precision. It can overcome the problem of small sample size and inadequate statistical power of genetic studies of complex traits, and provide more reliable results than a single case-control study.

The human pancreas produces the digestive pro-enzyme trypsinogen in three highly similar isoforms: cationic trypsinogen (PRSS1), anionic trypsinogen (PRSS2), and mesotrypsinogen (PRSS3). Normally, about 2/3 of total trypsinogen in the pancreatic juice are cationic trypsinogen [27-29]. Therefore, genetic defects or specific polymorphisms in PRSS1 may influence the susceptibility and severity of pancreatitis. Since 1996, over 25 mutations in this gene have been identified to be associated with pancreas. The most common mutations are R122H and N29I, which have been frequently found in hereditary pancreatitis families (http://www.uni-leipzig.de/pancreasmutation/). Moreover, the PRSS1 mutations can also be found in a variable incidence in idiopathic chronic pancreatitis [19-25]. Several biochemical studies demonstrated that most of these mutations led to enhanced trypsinogen auto-activation and/or increased trypsin stability [30-36]. Then the pancreatic protease anti-protease equilibrium may be disturbed. And this imbalance may initiate the subsequent auto-digestion and pancreatitis.

Considering the results of genetic association studies for PRSS1 and pancreatitis are inconsistent, we conducted this comprehensive meta-analysis. The current comprehensive study pooled larger sample sizes analyzing them both together and separately. The design of systematic methods and analytical approaches as well as tests of heterogeneity and sensitivity analyses has produced more significant results. The results, both in the total group and in the subgroups, showed that the gene was significantly associated with pancreatitis, and there was no heterogeneity existed in the populations. In conclusion, this meta-analysis supports significant association of marker in the PRSS1 gene with pancreatitis.

This work is supported by grants from the National Natural Science Foundation of China (31000408). The funders had no role in study design, data collection and analysis, decision to publish, or preparation of the manuscript.

J. Liu designed the study. J. Liu and HX. Zhang performed the statistical analysis and drafted the manuscript. All authors critically revised the manuscript and gave final approval of the article for submission.

All the authors declare to have no conflict of interest relevant to the subject matter or materials discussed in the article.