Background Estrogen receptor-positive breast cancer tumors depend on estrogen signaling for their growth and replication and can be treated by anti-estrogen therapy with tamoxifen. Polymorphisms of the CYP2D6 and CYP2C19 genes are associated with an impaired response to tamoxifen. The study objective was to investigate the impact of genetic polymorphisms in CYP2D6 and CYP2C19 on the pharmacokinetics of tamoxifen and its metabolites in Spanish women with estrogen receptor-positive breast cancer who were candidates for tamoxifen therapy.

Conclusion CYP2D6*4/*4 genotype was inversely associated with 4-hydroxy tamoxifen and endoxifen levels. According to these results, CYP2D6 and CYP2C19 genotyping appears advisable before the prescription of tamoxifen therapy.

Breast cancer is the most common cancer worldwide and the second leading cause of death by cancer. Estrogen and progesterone (steroid hormones) have been implicated in the pathogenesis of breast cancer [1]. Estrogen receptor-positive (ER+) tumors depend on estrogen signaling for their growth and replication and can be treated by anti-estrogen therapy with tamoxifen or an aromatase inhibitor [2].

The use of pharmacogenomic markers is important in oncology because of the frequently narrow therapeutic index of available drugs, the critical need for a favorable drug response, and the potentially life-threatening consequences of drug toxicity [3]. In this respect, genetic polymorphisms of the CYP2D6 gene have been reported as the main cause of variation in the metabolism of tamoxifen, which has been the standard treatment for ER+ breast cancer for more than three decades [4-6]. N-desmethyl tamoxifen, the main metabolite found in the serum of treated patients, undergoes secondary metabolism to 4-hydroxy-N-desmethyl tamoxifen (endoxifen). CYP2D6 is the enzyme responsible for this conversion and also converts tamoxifen to 4-hydroxy tamoxifen (4-OH tamoxifen), which undergoes secondary metabolism to endoxifen [5]. The CYP2D6 gene is highly polymorphic and has more than 100 different allele forms (http://www.cypalleles.ki.se/cyp2d6.htm), which can be classified as a function of the intensity of their enzyme activity as extensive metabolizer (EM), intermediate metabolizer (IM), poor metabolizer (PM), or ultra-rapid metabolizer (UM) phenotypes [7, 8]. CYP2C19 gene polymorphisms affect the metabolism of numerous drugs, including anti-depressants, and play an important role in the bioactivation of cyclophosphamide [9].

The enzyme CYP2C19 also participates in the conversion of tamoxifen to active metabolites, and the CYP2C19 gene has more than 35 allele variants (http://www.cypalleles.ki.se/cyo2c19.htm) [7, 8] A considerable variability has been observed among ethnic/racial groups in the frequency of CYP2D6 variants among the general population, with a decrease in the frequency of functional CYP2D6 alleles from 71% in Europeans to 50% in Asians [10, 11]. A high frequency of null and reduced-function variants has been reported worldwide, and ~7% of western Eurasian populations carry defective CYP2D6 alleles that are PM phenotypes encoding for inactive enzyme molecules [12]. CYP2D6*2*3*4*5*6*10 and *41 alleles are more frequent in Caucasians, CYP2D6*2 and *17 alleles in Africans, and CYP2D6*10 allele in Asians [11]. With regard to CYP2C19, two non-functional alleles (*2 and *3) account for 87% and 98% of the PM phenotype in Caucasian and Oriental populations, respectively [7].

In breast cancer patients, frequencies of 3.5%, 21.7%, 1.5%, 1.0%, 1.5% and 6.6% have been reported for CYP2D6 gene alleles *3, *4, *5, *6, *10 and *41, respectively [13]. Frequencies of 60.2% EM, 29.5% IM, and 8.3% PM were recently described in a large cohort of breast cancer patients, although the DNA was isolated from tumor samples, in which frequent losses of heterozygosity have been reported for breast cancer cells [14, 15]. Loss of CYP2D6 function was found to reduce the clinical efficacy of tamoxifen treatment [11], although two more recent articles have stimulated debate about the association of the CYP2D6 genotype with the pharmacodynamics of tamoxifen [14, 16]. Moreover, the clinical validity of CYP2D6 genotyping is not well established in breast cancer patients who are candidates for tamoxifen treatment [17].

Hence, the ability to predict the prevalence of EM, IM, PM, and UM phenotypes in a given population would support the design of a practical genotyping protocol for routine clinical use. The main objective of this pilot study was to determine the allele frequencies of the most relevant variants of CPY2D6 and CPY2C19 genes and their association with tamoxifen metabolite levels as a function of CYP2D6 polymorphisms in patients with ER+ breast cancer from Granada (Spain).

Based on the main outcome, i.e., the prevalence of the PM phenotype in the Spanish population [18], and assuming a type 1 error of α=0.05 and a precision of 5%, the minimum sample size was estimated to be 72 patients. The study included 90 women from San Cecilio University Hospital (Granada, Spain) with a histological diagnosis of ER+ non-invasive breast cancer and a Karnofsky index ≥ 80. All women received adjuvant tamoxifen (20 mg/day) during the study and for at least 4 months before the blood sampling for tamoxifen and metabolite determinations. None of the women in this study were receiving drugs that inhibit CYP2D6 function. All patients were non-metastatic at recruitment. The age range of the patients was 29-72 years, and 93% were premenopausal; the six postmenopausal women in the study received tamoxifen due to adverse effects from the use of aromatase inhibitor, in accordance with the hospital protocol. The study complied with the guidelines laid down in the Declaration of Helsinki, and all procedures involving human subjects were approved by the Clinical Research Ethics Committee of San Cecilio University Hospital. Informed consent was obtained from all participants.

Blood samples were centrifuged at 3000 rpm within 1 h of collection, and the plasma was stored at -80ºC until analysis. Concentrations of tamoxifen and its main metabolites were tested by high-performance liquid chromatography in an Agilent 1200 system (Agilent technologies) associated with tandem mass spectrometry at the Tejerina Foundation (Madrid, Spain).

The Mann-Whitney U test was used to compare differences in the levels of tamoxifen, 4-OH tamoxifen, N-desmethyl tamoxifen, and endoxifen. SPSS v.20 (IBM, Chicago, IL, USA) was used for the statistical analysis.

Given that only 5 women were PMs, a sample size of 18 individuals was estimated for the control group, based on a power of 85% and alpha error of 0.05 to detect a difference of one standard deviation between the means of two groups (EM and PM). We therefore randomly selected 20 women for the control group (EM phenotype). Figure 1 depicts tamoxifen, endoxifen, 4-OH tamoxifen, and N-desmethyl tamoxifen levels in EM, IM, and PM CYP2D6 phenotypes. Significant differences were found in the comparison of 4-OH tamoxifen and endoxifen levels between EM and PM phenotypes (P<0.001).

Genetic polymorphisms of CYP2D6 and CYP2C19 are clinically relevant in drug therapy. The CYP2D6 gene is considered responsible for the metabolism of around a quarter of the drugs available on the market, and its variants affect the metabolism of around half of these [19, 20]. Tamoxifen, which is widely used to treat ER+ breast cancer, is metabolized by the P450 cytochrome enzyme.

Variation in the CYP2D6 gene is high among different populations and among individuals in the same population [11]. Frequencies of 31% for the wild-type allele and 40.47% for allele *2 were reported in a Spanish general population [21]. Caucasian populations have shown frequencies of 33-37% for allele *1 and 22-33% for allele *2 [11, 22, 23]. The present results in breast cancer ER+ positive patients are therefore in broad agreement with findings in general populations, although there was a tendency for the frequency of allele *2 (21.0%) to be lower in our series than in the Spanish population [21] but close to the 16.5% found by Ramon et al in Spanish breast cancer patients [24].

The prevalence of the PM phenotype was reported to be 7-10% in Caucasian populations, and allele *4 was the most frequent null allele [4]. In the present series of women with ER+ breast cancer, 5.6% harbored allele CYP2D6*4 in homozygosis, similar to findings by Rebsamen et al in Caucasian women (5.5%) [25] and by Fernández-Santander et al in a cohort from southern Spain (3.9%) [10]. Breast cancer patients in Spain were found to have a frequency of 5.5% for the *4/*4 genotype [24]. Furthermore, the CYP2D*4 genotyping frequencies were in Hardy-Weinberg equilibrium. The frequency of this allele was 17.7%, comparable to frequencies observed in the Spanish general population (13.8-15.9%) [10, 21] and in other Caucasian populations (19%) [21, 22]. Interestingly, all PMs in our study were *4/*4. The frequency of non-functional allele CYP2D6*5 was only 0.6%, below the range of 2-7% described in Spanish and Caucasian populations, although closer to the percentages found in Sardinian (1.04%), central Italian (0.0%), and Syrian (0.98%) populations [10, 11, 21, 26]. It is well known that CYP2D6 diversity is far greater within than between populations and groups [27]. The molecular heterogeneity in Spain is higher than in other populations, as has been shown by our group for cystic fibrosis and for glucose 6- phosphate dehydrogenase [28, 29], which may explain the low frequency observed for allele *5.

It has been reported that tamoxifen-treated Caucasian patients who are heterozygous or homozygous for the CYP2D6*4 allele have a significantly increased risk of breast cancer recurrence, a shorter relapse-free period, and a lower event-free survival rate in comparison to carriers of functional alleles [30, 31]. In this context, serum levels of 4-OH tamoxifen and endoxifen, both dependent on CYP2D6 activity, were four-fold lower in the PMs than in the EMs in the present study, whereas no differences were found in the levels of tamoxifen or N-desmethyl tamoxifen, which are independent of CYP2D6 activity (Figure 1). Similar results were reported for Asian patients with CYP2D6*10/10 [32]. 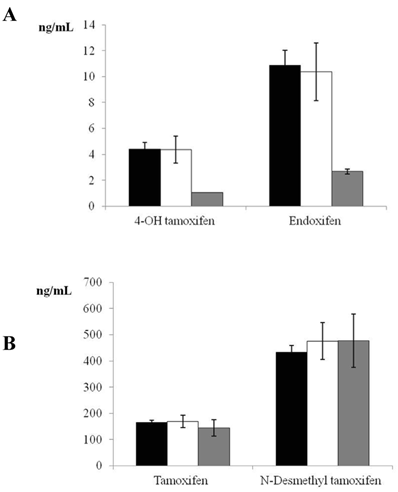 Some researchers found no association between CYP2C19 and tamoxifen efficacy [32, 33] , whereas others demonstrated that CYP2C19*2 in heterozygosis or homozygosis is relevant for tamoxifen therapy in advanced cancer disease and can serve as a predictive factor for survival in breast cancer patients treated with this drug [34, 35]. The frequency of CYP2C19 polymorphisms in our population was 84.4% for allele *1 and 15.6% for allele *2. A frequency of 16.5% was recently reported for allele *2 in a Hungarian general population, and a similar frequency of this CYP2C19 variant has been observed in various ethnic groups [7]. All of the CYP2D6 PMs in the present study were EMs for CYP2C19 (*1/*1 and *1/*2), which may indicate that CYP2C19 has no influence on the plasma endoxifen levels.

Our findings on CYP2D6 and CYP2C19 polymorphisms in a group of Spanish women with ER+ breast cancer are broadly similar to reports in general Caucasian populations. Without previous genotyping, incorrect treatment would likely have been ordered for the appreciable number (5.6%) of our patients who had PM phenotype (CYP2D6*4 allele in homozygosis in all cases) and were found to have lower endoxifen and 4-OH tamoxifen levels.

Our findings suggest that genotyping studies may be desirable before tamoxifen is prescribed. However, our study has some limitations. We measured tamoxifen and its main metabolites, but it was recently shown that N-desmethyl tamoxifen is converted into Z-endoxifen by the CYP2D6 enzyme and into Z'-endoxifen by an unknown hepatic enzyme, and both have different levels of anti-estrogenic activity [36]. It would be of interest to explore the relationship between the CYP2D6 genotype and the levels of these isomers. In addition, although the sample size was adequate to yield significant differences, the results of this pilot study need to be confirmed in larger samples. Further studies are in progress by our group to develop guidelines on drug dosage as a function of CYP2D6 and CYP2C19 genotypes.

The authors are grateful to Dr. Josep Solé from Roche Diagnostics S.L (Spain) for his collaboration and comments on this paper and to Richard Davies for assistance with the English version. CGLL has a postdoctoral fellowship from the Plan Propio of the University of Granada.