Conclusions: Areca nut chewing is independently associated with the prevalence of AF in Taiwanese men. However, further exploration of the underlying mechanisms is necessary.

Atrial fibrillation/atrial flutter (AF) is the most commonly diagnosed atrial tachyarrhythmia in clinical practice [1]. According to The Framingham Heart Study, subjects with AF had an increased risk of stroke and a near two-fold mortality rate as compared to those without [2]. In Taiwan, the overall prevalence rate of AF was 1.07% [3]. Taiwanese patients with AF had a four-fold and two-fold increased risk of suffering from stroke and all-cause-death, respectively [3].

Areca nut (AN) chewing is the fourth most popular substance abuse habit in the world [4]. Previous studies have found that AN chewing is associated with the risk of obesity, metabolic syndrome, hypertension, cardiovascular disease such as coronary artery disease (CAD), and all-cause mortality [5-10]. Several case reports/case series also show that AN chewing may be linked to cardiac arrhythmias [11-16]. However, to our knowledge, there is no study investigating the relationship between AN chewing and AF. Thus, we conducted a nationwide ecological study by combining the population-based National Health Insurance research dataset (NHIRD)[17] and the National Health Interview Survey (NHIS)[18] to examine the association between AF and AN chewing. Due to the lower AN chewing rate in Taiwanese women, male subjects only were analyzed [19].

Study subjects were randomly selected from 2004-2005 NHIRD; all were males and older than 18 years of age. Subjects residing in off-shore islands were excluded due to differences in life style and health related behaviors (Figure 1). Taiwan's National Health Insurance (NHI) program enrolled about 23 million people, ~99% of the Taiwanese population. The NHIRD contained data on utilization of all NHI resources, including outpatient visits, hospital care, and prescribed medications. The study cohort was identified and tracked from a subset of the NHIRD, the Longitudinal Health Insurance Database of 2005 [18]. Demographic and medical data including age, gender, residential area, and co-morbidity were obtained from the 2004-2005 NHIRD. The co-morbidities were obtained by diagnosis according to the International Classification of Diseases, Ninth Revision (ICD9) codes of outpatient visits or hospitalizations.. The co-morbidities predisposing subjects to AF were selected and used in multivariate analysis (Supplemental table 1). Since the NHIRD consists of encrypted secondary data, the study was waived from full review by the Institutional Review Board in Kaohsiung Medical University Hospital.

The flow chart of case/control group including and excluding. 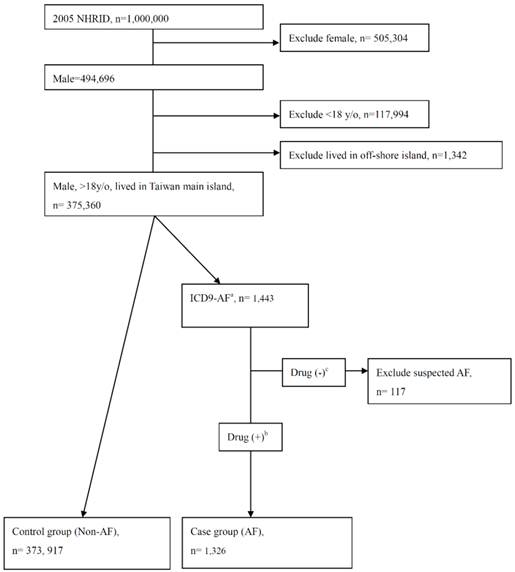 Validation of the AF diagnosis

To validate the diagnostic accuracy, a review of medical charts was performed by a physician who was blinded in this study. One hundred charts which showed the ICD9 code 427.31 or 427.32 and the use of medications such as amiodarone, propafenone, digoxin, aspirin, clopidogrel, or warfarin (any of which might be prescribed to AF patients in out-patient departments or wards) were randomly selected in one medical centre and one community teaching hospital to see if there was any record of AF either by electrocardiogram or 24-hour Holter monitoring. The diagnostic accuracy of AF (by ICD9 coding) was found to be 98% (100% (50/50) and 96% (48/50) in the medical center and community teaching hospital, respectively. Patients who had an AF diagnosis by ICD9 code and also used the aforementioned medications in the same index date were selected for inclusion in the case group. Those patients who had an AF diagnosis by ICD9 code but had never been medicated (suspected AF) were excluded from the study (Figure 1).

The 2005 NHIS in Taiwan was conducted by the National Health Research Institutes, National Bureau of Controlled Drugs and Bureau of Health Promotion, Department of Health, Taiwan[19]. The study sample was nationally representative by using a multi-stage stratified systematic sampling design. All subjects were personally interviewed by well-trained interviewers. The detailed data was then released for public use and can be collected from web site: Year 2005 National Health Interview Survey http://olap.bhp.doh.gov.tw/en_US/Search/Search.aspx?menu=100000000006&KeyWord=betel. The target population of the original survey was 22,615,307 individuals whose households were registered in one of the 23 counties or cities in Taiwan in the year 2004-2005. Among the 187 neighbourhoods or villages, 30,680 persons were sampled (sampling rate 1.35%). A total of 24,726 persons completed the survey with a response rate of 80.6%. Individuals younger than 18 years of age (n = 6198), females older than 18 years of age (n = 9101), and those living outside of the main island of Taiwan (n=302) were excluded from this study. The health related behaviors of the total 9,125 participants were used as exposure variables in our study. The particular health related behaviors included in our analysis were cigarette smoking, betel nut chewing, infrequent vegetable eating, and exercising. The habitual behaviors were identified by questionnaire; ”Have you ever smoked cigarettes?”; “Do you chew betel quid now?” ; “During the past 2 weeks, have you ever performed any exercise?” and “Do you eat fresh vegetable less than or equal to once in a week?”. The information of health related behaviors were presented as a percentage of the population of one county or city.

Three multivariate models were used to explore the relationship between AN chewing and the risk of AF. Model 1was only adjusted for the demographic characteristics and rate of health related behaviors. Model 2 was adjusted for the demographic characteristics, rate of health related behaviors, and the covariates which were not reported to be associated with AN chewing previously. Model 3 was adjusted for all the covariates. All tests were 2-sided and the level of significance was established as P < 0.05. All statistical analyses were carried out by using SAS software (version 8.0; SAS Institute Inc, Cary, NC).

The relationship between rate of AN chewing in a city/county and the prevalence of AF was evaluated in Figure 2. The scatter plot of these two showed a linear relationship. The Spearman`s correlation coefficient between the rate of AN chewing and the prevalence of AF was 0.558, which was significant (p = 0.007) (correlation coefficient = 0.733, p <0.001, R2 = 0.538 in Pearson method). 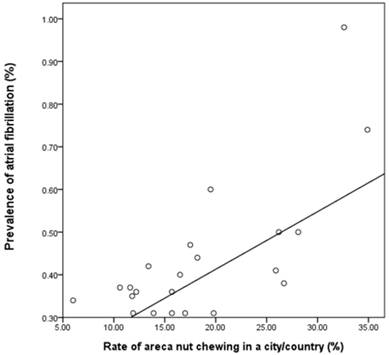 After adjusting for other covariates, we found that the AN chewing rate was independently positively associated with the prevalence of AF (Table 2). The adjusted odd ratio (OR) of current AN chewing was 1.02 (95% confidence interval (CI) = 1.00-1.04) in the risk of AF prevalence in Model 3. Similar results were found in Model 1 and 2. Other covariates, including age, hypertension, congestive heart failure, ischemic stroke, ischemic heart disease, COPD, thyroid disease, valvular heart disease, and cardiomyopathy, were all significantly associated with AF in Model 3 (Table 2).

We also analysed the case group as AF diagnosed by ICD-9 coding only but not confirmed by medication use as previously mentioned (ICD-9 AF) with the control group (No ICD9-AF) and the same result of significantly association between AN and AF was found (OR = 1.02, 95% CI = 1.00-1.04, p = 0.016). Furthermore, urbanization was found to be positively associated with the prevalence of AF. The adjusted OR for urbanization in full adjusted model was 1.29 (95% CI, 1.10-1.51) in risk of AF prevalence. 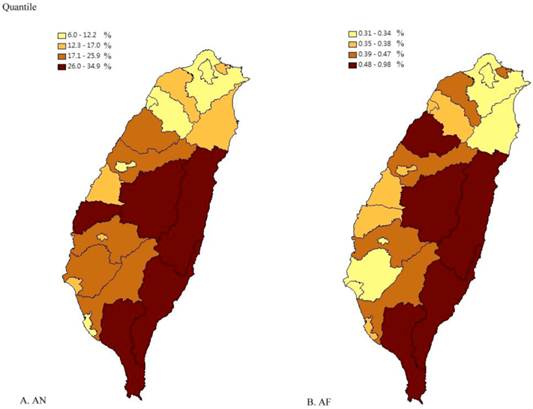 Several previous studies have reported the association between AN chewing and the risk of cardiac arrhythmias [11-16, 21], but most of these previous studies were case reports or case series. Wyatt first reported that betel nut chewing in 28 young male operators resulted in significant increase in pulse rate. The most common cardiac arrhythmias related to betel chewing were sinus tachycardia, and premature atrial contractions [21]. Chiang et al. then reported one sudden death and one paroxysmal supraventricular tachycardia case resulting from chewing betel quid [16]. Subsequently, Deng et al. reviewed the probable or possible betel nut related toxicity cases in 1988-1998 reported to the Taiwan Poison Control Center. The most common manifestations were tachycardia/palpitations, tacypnea/dyspnea, hypotension, sweating, dizziness, chest discomfort, coma, acute myocardial infarction, and ventricular fibrillation. Betel nut chewing can produce significant cholinergic, neurological, cardiovascular, and gastrointestinal manifestations [14]. In volume 85 of International Agency for Research on Cancer (IARC) report, extract of Piper Betle inflorescence, a composition of common AN chewing regimen induced hypotensive and bradycardiac effects in male rats by intra-arterial and intrathecal injections. The acute administration of extracts of betel inflorescence by different routes might activate C-fiber-evoked parasympathetic and sympathetic cardiovascular reflexes in rats [13]. Dose-dependent atropine-sensitive inhibition of isolated guinea-pig atrial contractility was found by Ghayur et al [12]. Most recently, Chou et al. reported that Pinang-Wang, a special form of betel nut, induced persisting ST elevation in electrocardiogram with normal coronary artery by angiography and refractory ventricular tachycardia/fibrillation in a 50 years old male. The ventricular arrhythmias were refractory to conventional treating algorithm but only converted by the intravenous injection of sodium bicarbonate. Thus, the constituents of Pinang-Wang might possess the property of sodium channel blocker [11].

AF, one of the most common cardiac arrhythmias in the world, is thought to be associated with ageing, hypertension, symptomatic heart failure, tachycardiomyopathy, valvular heart disease, cardiomyopathies, atrial septal defect, coronary artery disease, thyroid dysfunction, obesity, COPD, sleep apnea, and chronic kidney disease [22]. AN chewing has been previously reported to be associated with some risk factors of AF. General and central obesity were related to AN chewing in Chinese males reported by Lin et al [8]. AN chewing has also been associated with HTN in Taiwanese patients with type-2 diabetes [5]. In our previous study, AN chewing was independently associated with CAD [10]. Those findings, along with ours, suggest that AN might act as an independent risk factor for AF or as a mediator that modifies the risk of hypertension, obesity, or CAD.

There are several possible mechanisms to explain the link between AN chewing and AF. AF was thought to be related to chronic inflammation and increased sympathetic/parasympathetic activity in previous studies [23]. AN and the other component of regimens of betel nut chewing were associated with inflammation by the mechanisms as increasing COX-2, reactive oxygen species, superoxide dismutase, NF-κB, tumor necrosis factor-alpha, interleukin (IL)-1 beta, IL-6 and IL-8. Arecoline, the most well-known content of the AN, was reported to induce COX-2 up-regulation [24]. Hydroxychavicol, another major phenolic compound in the inflorescence, could induce reactive oxygen species production via redox cycling [25], increase superoxide dismutase activity in mice liver [26]. Ni et al. found that human buccal mucosa cells exposed to AN could activate NF-κB expression [27]. The expressions of tumor necrosis factor-alpha, interleukin (IL)-1 beta, IL-6 and IL-8 were also increased in human peripheral blood mononuclear cells after being treated with AN extract [28]. AN chewing was previously reported to increase sympathetic and parasympathetic activity [13, 29]. Ghayur et al.had reported the cardio-selective cholinomimetic activity of the betel nut crude extract in isolated guinea-pig atrium [12]. The cholinomimetic and acetylcholinesterase (AChE) inhibitory constituents in betel nut used in rabbit were reported by Gilani et al[30]. The increasing consumption of betel nut preparation resulted in a reduction in RR interval variation in electrocardiogram, particularly during deep breathing in human subjects [31].

This study had several limitations. First, this is an ecological study. The exposure of interest, AN chewing, and several other covariates such cigarette smoking, infrequent vegetable eating, and exercise were not individual information hence the introduction of confounding bias is likely. Second, since the design was cross-sectional, we cannot infer the causality between AN and AF. Third, the diagnosis of AF and other co-morbidities may not always be accurate. However, we have attempted to overcome this by verifying the diagnoses in one medical center and one community teaching hospital.

In conclusion, we have shown that rate of current AN chewing is independently associated with the prevalence of AF in Taiwanese men. The rate of smoking, infrequent vegetable eating, and level of exercise were not associated with the prevalence of AF. Further studies are needed to clarify the dose responsive relationship between AN chewing and AF and the mechanisms behind that correlation.