Background We previously reported that the constitutional flavonoid glycosides derived from herb Epimedium (EF, composed of seven flavonoid compounds with common nuclear stem) exerted beneficial effects on the bone, including promoting bone formation and inhibiting bone marrow fat deposition. Recent in vivo study showed that Icaritin was a common metabolite of these constitutional flavonoid glycosides, indicating that Icaritin is a bioactive compound. The present study was designed to investigate whether Icaritin could promote osteogenic differentiation and suppress adipogenic differentiation of marrow mesenchymal stem cells (MSCs).

Conclusion This was the first study demonstrating that the novel semisynthetic molecule Icaritin could stimulate osteogenic differentiation and inhibit adipogenesis of MSCs, which was associated with the suppression of GSK3β and PPARγ.

Many Chinese-herb-derived formulas have shown their protective effects on bone in experimental and clinical studies, but the bioactive component(s) in these formulas are difficult to identify. This has greatly hampered the development and globalization of herbal medicine. We have previously reported the preclinical and clinical findings of constitutional flavonoid glycosides derived from herbal Epimedium (EF, composed of seven flavonoid compounds with common nuclear stem) to treat postmenopausal osteoporosis and steroid-associated bone disorders. EF exerted beneficial effects on bone, including promotion of bone formation and inhibition of bone marrow fat deposition (1-3). However, the bioactive compound and the underlying mechanisms remain unclear.

Decreased bone formation and increased bone marrow fat deposition are common feature in postmenopausal osteoporosis and other bone disorders (4,5). These have been explained by suppressed osteogenesis and enhanced adipogenesis of marrow mesenchymal stem cells (MSCs) (6-9). Wang et al. and Mukherjee et al. reported that treating osteoporotic animals with bioactive agents that enhanced osteogenic differentiation of MSCs, also promoted bone formation (10,11). These results suggested that the beneficial effect of our efficacy-proven EF on bone might be due to the modulation of the balance between osteogenic and adipogenic differentiation of MSCs by its bioactive compound(s). Recent in vivo study showed that Icaritin was the common metabolic compound of the seven flavonoid compounds in this formula (12), indicating that Icaritin was a relevant bioactive compound. The present study aimed to investigate whether Icaritin could stimulate osteogenic and inhibit adipogenic differentiation of MSCs.

Bone marrow was harvested from femora and tibiae of 3~4-month old wild-type C57BL/6N mice, and used for collecting MSCs according to a previously published protocol (13). The cell suspension was prepared in phosphate buffered saline (PBS), and then layered onto Lymphoprep™ (1.077g/ml; Nycomed-Amersham, Norway) for density gradient centrifugation (1840rpm, 30 mins, at room temperature). The mononuclear cells were collected from the interface of the Ficoll solution, and then resuspended in Dulbecco's Modified Eagle's medium (DMEM) that contained 10% fetal calf serum (FCS), 100U/ml penicillin, 100mg/ml streptomycin, 2.5µg/ml fungizone and 2mM L-glutamine (Invitrogen, Paisley, UK), and then seeded into T75 flasks (Nunc, Roskilde, Denmark) at a density of 1-3×105 cells/cm2. These cells were incubated at 37ºC in humidified 5% CO2. When the primary MSCs reached confluence, they were separated using Trypsin-EDTA solution and passed at 1×104 cells/cm2 into T75 flasks. The subsequently obtained MSCs were used in the following experiments.

MSCs were seeded at a density of 5000 cells/cm2 in 6-well culture plate in DMEM. When MSCs reached confluence, the medium was replaced with the osteogenic differentiation medium (OM) whose composition was DMEM consisting of 10% FCS, 0.3mM ascorbic acid, 10mM β-glycerophosphate and 10-8M dexamethasone (14). The treatment consisted of either vehicle (0.1% dimethylsulfoxide) or increasing concentrations of Icaritin (0.1-10μM). The cells were harvested at different points in time to determine the alkaline phosphatase (ALP) activity and the degree of mineralization, and the determination of the mRNA expression for Runx2, BSP and osteocalcin.

MSCs were seeded at a density of 5000 cells/cm2 in the 6-well culture plate in DMEM. When MSCs reached confluence, the medium was changed to the adipogenic differentiation medium (AM) whose composition was DMEM consisting of 10% FCS, 0.5μg/ml insulin, 10-8M dexamethasone and 0.5mM isobutylmethylxanthine (14). The treatment consisted of either vehicle (0.1% dimethylsulfoxide) or increasing concentrations of Icaritin (0.1-10μM). Oil Red O staining for adipogenesis and mRNA expression for PPARγ, LPL and aP2 were evaluated at the indicated points in time.

Mineralization of MSCs was analyzed after 18 days' osteogenic induction. To this end, cells were fixed with 95% ethanol for 30 minutes, stained with 2% alizarin red for 20 minutes, and then washed with distilled water. The MetaMorph image Analysis Software (Universal Imaging CorporationTM, Downingtown, PA, USA) was used to quantify the mineralized nodules, and the percentage of mineralized nodules was expressed as a fraction of the total measured area as previously described (15).

Cells were collected at the indicated point in time during the osteogenic and adipogenic stimulation. The total RNA was extracted by Trizol reagent after washing them with PBS. The extract was reverse-transcripted under the following conditions: 42℃ for 45 mins, and 99℃ for 5 mins, and the cDNA product was stored at -20℃. Forward and reverse PCR primers were synthesized for Runx2, osteocalcin, BSP, PPARγ, LPL, aP2, and GAPDH based on published paper (16,17). The forward and reverse primers were: Runx2 (5'-AACCCACGGCCCTCCCTGAACTCT-3' and 5'-ACTGGCGGGGTGTAGGTAAAGGTG-3'), osteocalcin (5'-ACCCTGGCTGCGCTCTGTCTCT-3' and 5'-GATGCGTTTGTAGGCGG-TCTTCA-3'), BSP( 5'-CAGAGGAGGCAAGCGTCACT-3' and 5'- CTGTCTGGGTGCCAACACTG-3'), PPARγ (5'-GGGTCAGCTCTTGTGAATGG-3' and 5'-CTGATGCACTGCCTATGAGC-3'), LPL (5'-AGGTCATCTTCTGTGCTAGG-3' and 5'-ATGCTGGAAGACCTGCTATG-3'), aP2 (5'-TGTGATGCCTTTGTGGGAACC-3' and 5'-CGTCTGCGGTGATTTCATC-3') and GAPDH (5'-CACCATGGAGAAGGCCGGGG-3' and 5'-GACGGACACATTGGGGGTAG-3). RT-PCR was performed and analyzed in a capillary real-time thermocycler (LightCycler, Roche Diagnostics, USA). Amplification was done in the presence of SYBR Green 1. The PCRs were done in a 20μl reaction in which cDNA was mixed with LightCycler-Fastart DNA Master SYBR Green, and contained 10pmol of forward and reverse primer and 4mM MgCl2 respectively. The samples were amplified in a thermocycler under the following conditions: 50 cycles at 95oC for 10 mins, 50 cycles at 95oC for 10 secs, 50 cycles at 55-60oC depending on the primer set for 10 secs, and 50 cycles at 72oC for 30 secs. PCR product accumulation was monitored at multiple points during each cycle by measuring the increase in fluorescence that was generated by the binding of SYBR Green 1 to dsDNA. Data analysis was performed with “Fit Point Method” in the LightCycler software 3.3 (Roche Diagnostics). Relative quantification was made against the expression levels of the house keeping gene GAPDH (18).

The number of adipocyte-like cells was quantified on day 18 using the Oil Red O staining method (8). Briefly, the cells were fixed with 10% neutral buffered formalin, incubated with 60% propylene glycol, and then stained with 0.5% (wt/vol) Oil Red O in 60% propylene glycol for 30 minutes. After staining, the cells were rinsed thoroughly with distilled water, and then incubated for 1 hour at room temperature after adding 1ml of isopropyl alcohol. Aliquots of the extracted Oil Red O were measured at 510 nm with spectrophotometer (Ultrospec 3000, Pharmacia Biotech, USA). The values were normalized to cells protein which was measured using the BCA protein assay kit (Pierce, USA).

To investigate the effects of Icaritin on osteogenic differentiation of MSCs, mRNA expression of Runx2 for the lineage-specific gene of osteogenic differentiation, BSP for osteogenesis protein, and osteocalcin for the mature osteoblast marker, together with the ALP activity and the extent of matrix mineralization were determined on day 3, 6 and 18 based on the preliminary experiments respectively.

To investigate the effects of Icaritin on adipogenic differentiation of MSCs, the mRNA expression of PPARγ for the lineage-specific transcription factor and aP2 and LPL for the adipocyte-specific markers were determined by RT-PCR on day 3. The adipocyte-like cells were quantified using Oil Red O staining method based on the preliminary experiments. 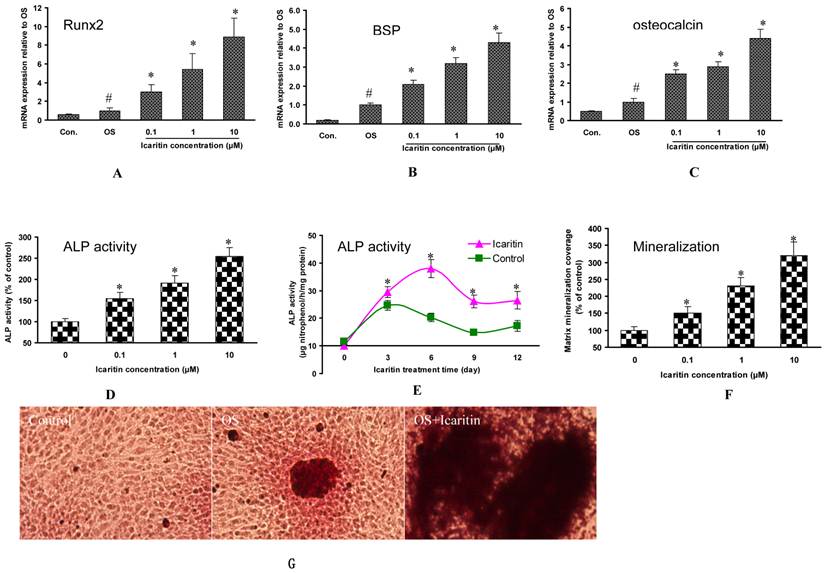 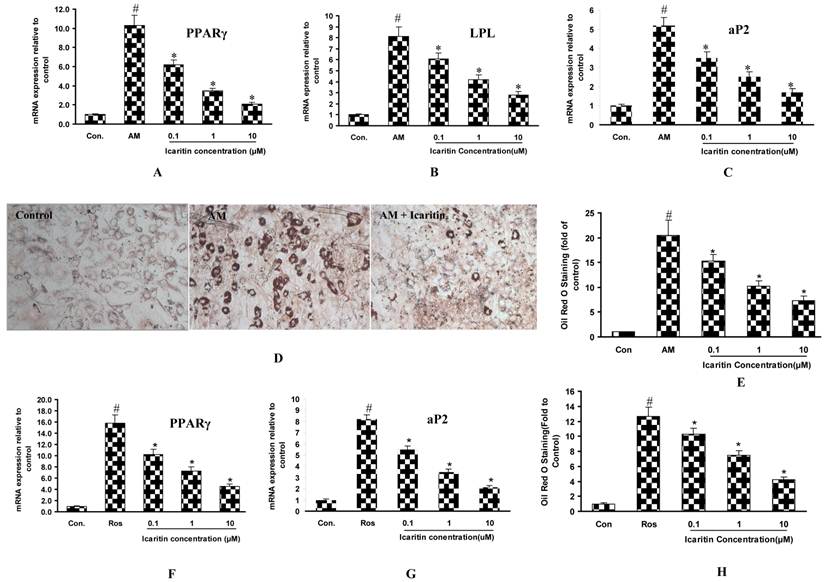 Osteogenesis is a spatial cascade process, which initiates from the commitment and differentiation of bone marrow MSCs into osteoprogenitor cells and then preosteoblasts and osteoblasts, followed by matrix maturation and matrix mineralization (21). The commitment and differentiation of bone marrow MSCs towards osteoblast lineage, therefore, is the critical step in osteogenesis initiated by the activation of Runx2. The importance of this gene has been confirmed by the fact that a Runx2 gene knockout results in a complete lack of bone formation owing to maturational arrest of osteoblasts (22). During the differentiation into mature osteoblasts, a number of extracellular matrix genes are expressed by MSCs, such as bone sialoprotein, which is regarded as the middle stage marker of osteogenesis. At the late stage of bone formation, osteocalcin is up-regulated, which represents the maturation of osteoblasts and matrix mineralization processing.

As shown in the primary mice bone marrow MSCs, Icaritin up-regulated the expression of Runx2, bone sialoprotein and increased the ALP activity in a dose-dependent manner. These results suggested that Icaritin could promote the commitment and differentiation of osteoblasts in bone MSCs. In the maturation stage, the osteocalcin and matrix mineralization were also increased, suggesting that Icaritin could also promote osteoblasts maturation. In the previous published paper, Huang et al. also showed that Icaritin is more potent than herbal Epimedium-derived Icariin and icariside II in promoting osteoblastic differentiation, supporting the idea that Icaritin is a very important bioactive compound from Epimedium (23). For the underlying mechanism, as GSK3β could control osteogenesis through regulating Runx2 activity (24), the increased expression of Runx2 in Icaritin-treated MSCs might result from regulating GSK3β activity. Therefore, the GSK3β activity was explored in this study. The result showed that Icaritin caused phosphorylation of GSK3β on its Ser9 site (causing inactivation). Furthermore, the inactivation of GSK3β was accompanied with increased expression of β-catenin. GSK3β is a negative factor for controlling osteogenesis in normal situation. However, after inactivation by phosphorylation on its Ser9 site, it would activate β-catenin and initiate osteogenesis (25). These results suggested that Icaritin-induced osteogenic differentiation was associated with regulation of GSK3β activity.

This was one of the first studies demonstrating that the semisynthetic molecule Icaritin could promote osteogenic differentiation and inhibit their adipogenesis of MSCs. These results demonstrate also that the pro-osteogenic effect of Icaritin is associated with regulation of GSK3β activity, and its anti-adipogenic effect is associated with blocking PPARγ signaling. The in vitro study indicates that Icaritin has the potential for further development into anti-osteoporosis drug.

9. Nuttall ME, Gimble JM. Controlling the balance between osteoblastogenesis and adipogenesis and the consequent therapeutic implications. Curr Opin Pharmacol. 2004;4(3):290-4